What seems new is only new to us.
-Pearl S. Buck

As Reagan's mother, one of my prerogatives is to introduce her to new things, inserting explanatory notes where necessary, & sneaking in a lesson when applicable.  Even before she was born, she was regularly exposed to the soundtracks from various musicals . . . Aida, Wicked, Mamma Mia, The Sound of Music, Phantom of the Opera.


When Reagan was about a week old, I was home alone with her one night & The Sound of Music came on television.  She slept through most of it, & I just sat in Trey's recliner & held her while I watched & sang along when the mood struck.

In the film version of the musical, one of the few songs sung by the reserved Captain von Trapp, played by a young(er) Christopher Plummer, is "Edelweiss."  I began singing it to Reagan when she was upset, & I still do sometimes.  Sometimes, I sing it to myself even when no one is around.  These are the lyrics:

No, we're not Austrian or fleeing the Nazis, but it's a fantastic lullaby.

Along with "Edelweiss," Reagan should know the entire Sound of Music soundtrack shortly.  It's important that she learns all of these soundtracks so that she can sing along with ease on family road trips.

Music is a fantastic way to stealthily introduce her to figurative language.  Several Simon & Garfunkel hits are rife with it . . . Like a bridge over troubled water, I will lay me down . . . I am a rock, I am an island . . . and perhaps one my favorite alliterative lines in any song, ever, ". . . a freshly fallen silent shroud of snow."

One of the final songs on the Wicked soundtrack is titled "For Good," a duet sung by the female leads.  It's a fantastic song, probably one of my favorites I've seen performed live, & the chorus is nothing but a string of similes, attempts to explain the fated meeting of the two friends, Glinda (the good witch) & Elphaba (a green girl who is the younger version of the Wicked Witch).

and later in the song,

Aren't you eager to jump in the car with me now?

In addition to my loves & obsessions, Reagan is also learning the ropes of some of her other relatives' pastimes.

Here she is a few weeks ago venturing onto the golf course for the first time.  She may not actually ever play, but she lives on a golf course & her grandfathers are completely obsessed  play regularly, so it'll affect her in various ways as she grows.  For example, their golf game sometimes pushes Friday night dinner back (but I never complain). 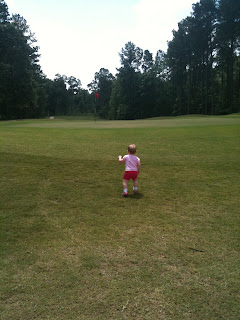 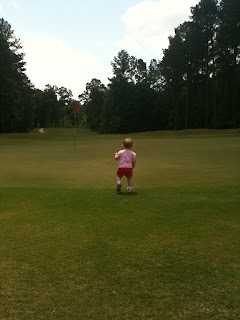 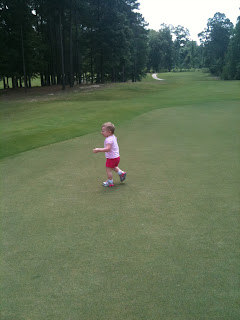 Back to the links yesterday: 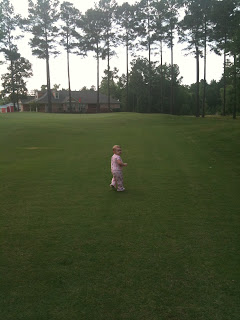 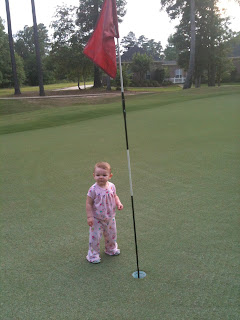 Getting pretty daring with her exploration: 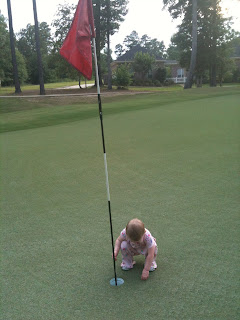 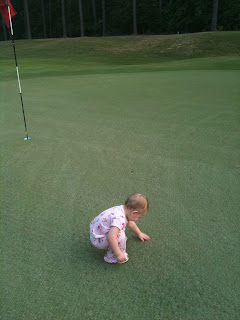 After we left the golf course, she noticed pine cones haphazardly strewn about & began gathering them together in one place.  She is definitely mine. 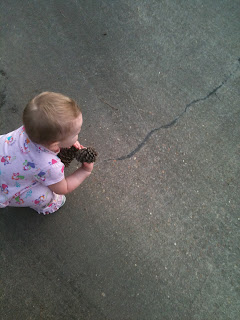 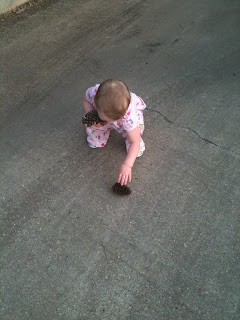 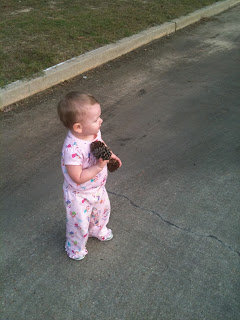 First time behind the wheel . . . she had as much trouble with 'Reverse' as I did when I began driving: 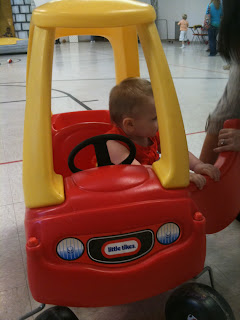 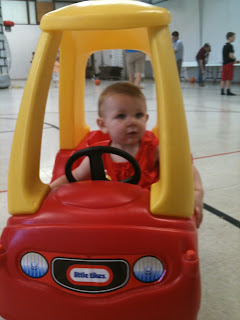 A little physics lesson, learning the hard way that this stroller is for her dolls (which is about the only physics lesson I can teach her): 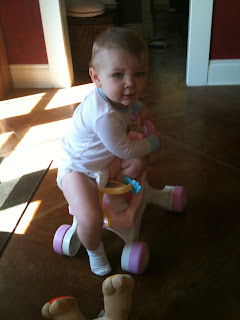 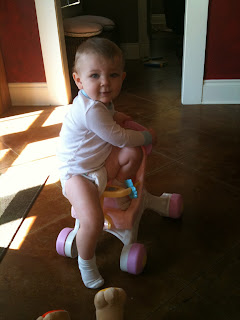 An introduction to overalls, because, you know, we live on the west side of the river & all: 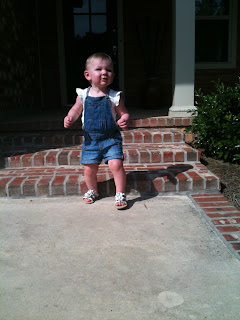 Introducing her to a few of my childhood heroes, Zack Morris & Mr. Belding: 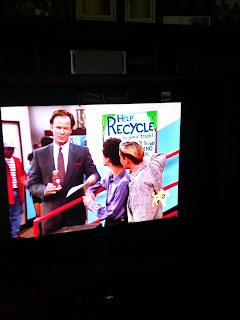 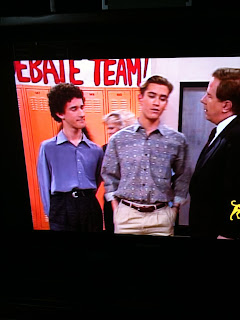 I didn't know what to get my Mom for Mother's Day.  I finally settled on something she, regrettably, can no longer buy at the store.  For many years, you could go to the store & buy a package of Oreo cookies dipped in Fudge.  The only option available now is what they call "Fudge Cremes," which is half an Oreo dipped in Fudge.  It is not the same.

Thus, last week Reagan was introduced to the wonderful world of an entire Oreo cookie encased in high quality chocolate.  I make them now, occasionally, & they are incredible.  I use Baker's Dipping Chocolate, which heats in the microwave, & then you just dunk the Oreo in & allow it to cool in the fridge.  I bought the ingredients on Tuesday & made the cookies for my Mom on Friday, meaning all of it sat in the house for days & I didn't touch it . . . that is love. 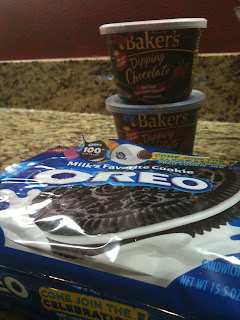 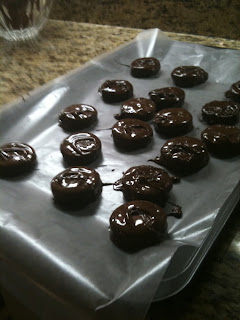 The one activity Reagan needed no introduction to is a passion she shares with her Daddy - rocking.  I've never been a rocker, preferring stillness, I suppose, but I live with two rocking fools, which works out well for me at bedtime when I slip into bed with a book, or my MacBook, while Trey & Reagan rock themselves into oblivion. 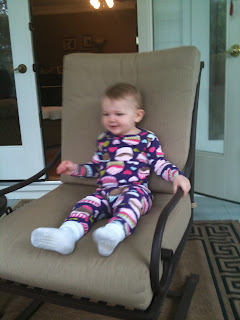 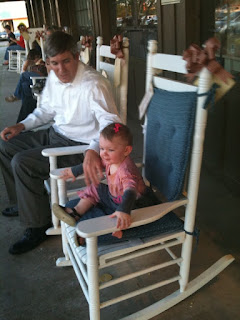 Reagan has introduced me to a few things as well.  I now celebrate Mother's Day from both sides of the fence.  I wonder how many years it will take me before it no longer surprises me when someone wishes me 'Happy Mother's Day.'  Maybe once I get a minivan?  Seriously, I've been enviously eyeing the owners of Honda Odysseys & Toyota Siennas lately. 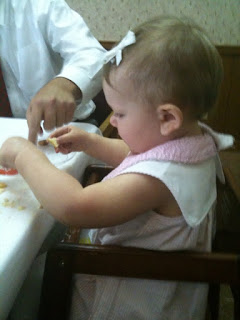 A few attempts at a Mother's Day pic: 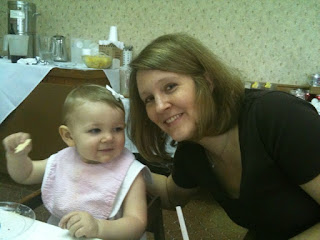 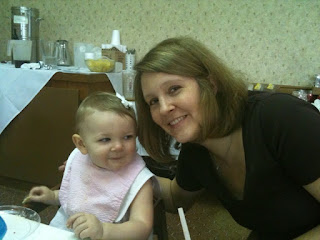 It's continually fascinating to experience the otherwise mundane with Reagan (her desire to explore is the only reason I'd ever set foot on a golf course), & share things I love with her.  Maybe one day when she's older, she'll be the envy of her friends as she points out similes & metaphors in songs.  I can dream.