*Disclaimer:  This is a lengthy, rambling post.  It's something I want Reagan to read later, perhaps when she's undecided about a college major, or considering attending graduate school, or spending too much time watching TV, but I warn you, it may not interest you in the least, &, I'm okay with that.

Friday before last, I left Reagan with Trey while I joined the ladies in my book club to discuss last month's selection, Rebecca, & watch the Hitchcock film by the same name.  The book club, formal as it may sound, is a group of women from church.  We banter on Facebook about the book of the month, & then decide when we can carve time out to meet & discuss it face to face.

One of the things I enjoy most is reading a good book & sitting around discussing it with others.  I had almost forgotten this until recently, & I am thoroughly enjoying my book club membership.  Many thanks to my friend & fellow blogger, Amy LeBlanc, for the invite, & for not revoking my membership for superfluous Twilight references.


By the time I graduated from college with an English degree, I was burned out on literature, & for a few years, if I read anything, it was political in nature.  After years of moaning about my dad's penchant for talk radio, I discovered Rush Limbaugh, who, for all his faults, is immensely talented at what he does & remains at the top of my list of people I'd like to meet.  Thus, when I decided to get a masters, I opted to study communication, taking several courses on media relations & theories of mass media.  I began graduate school in the fall of 2004, an election year, & I had many spirited debates in (& out of) class with my peers & my biased, left leaning professors about the news media & its role in a democracy.  I learned a lot about myself, about the differences in APA & MLA citation styles, &, as a graduate assistant, I learned that I love collegiate teaching.

Maybe it took a decade to recover from four years of collegiate level literature analysis, or a book club invitation, or a well mannered vampire named Edward, or losing faith in both political parties, but I find myself gravitating back to fiction.  Fiction allows for indulgences that are either not possible, or not permissible, in reality, &, if it's well written, it holds up a mirror for the observant reader, a reflection that is sometimes disturbing, & always thought provoking.  As Emerson succinctly stated, "Fiction reveals truth that reality obscures."

*Spoiler alert* for my mother, who is currently reading Rebecca.


I was frustrated reading Rebecca because for chapter after chapter, I didn't know how I was supposed to feel about the narrator's husband, Max de Winter.  I wanted to like him, but, like his young bride, I had my reservations about his loyalties.  He is twenty years her senior & married her after his first wife, Rebecca, died.  The narrator assumes Max still loves his deceased wife & only married her in an attempt to combat loneliness, and several people tell her exactly this throughout the novel.  Rebecca, though dead, dominates the novel (because she dominates the narrator's thoughts).  You begin to understand why the novel appealed to Hitchcock.  The narrator is so distraught over the looming presence of the first Mrs. de Winter that she almost commits suicide at the urging of the completely creepy housekeeper, Mrs. Danvers, who is eerily obsessed with Rebecca. 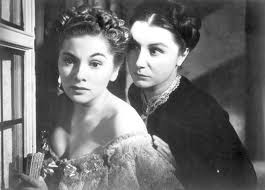 And some of the movie paraphernalia (read the book . . . much better than the movie): 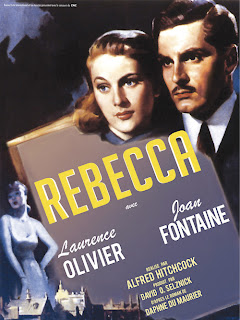 Just when I was ready to hurl the book across the room, so fed up was I with the weak narrator who cowers in corners, assuming her husband's thoughts are as consumed by Rebecca as her own but too afraid to broach the subject, the novel takes a drastic turn.  The narrator (& the reader) has been led to believe that Rebecca drowned in a boating accident.  When her boat, & her body, are discovered, Max confesses to the narrator that he killed Rebecca.  He recounts the sordid details of their loveless marriage, which ended when Rebecca taunted Max with the information that she was carrying another man's child who the rest of the world would assume was the product of their marriage, eventually inheriting Manderley (the family estate that is itself a character in the novel) & the de Winter fortune.

After his confession, the narrator & I both had significantly more information with which to form an opinion of Max.  Max assumes the narrator could not possibly love him now, after all, he is a murderer.  Strangely, the narrator & I both had the same reaction . . . elation over the knowledge that he never loved Rebecca.  The weight lifted from her shoulders is palpable as you read, & I probably breathed a loud sigh of relief myself.  That he murdered his wife is an afterthought, the true shock, for the reader & the narrator, is that he didn't love Rebecca, he never loved her.  The narrator immediately & without question accepts the justification Max offers for Rebecca's murder; she was a vicious, licentious woman whose announcement of her plans to pass off another man's child as her husband's was her final evil act.


There is some evidence in the novel that confirms Max de Winter's assessment of his first wife, but I believed his account as readily as the narrator, so eager was I to believe that he had never loved Rebecca.  The novel is a testament to the need women have to be loved, & to be secure in the knowledge that their husband's affections are in no way divided.  This need is so great in the narrator that she is willing to overlook the murder of her husband's first wife at his hands, & is eager to help him hide his guilt from authorities.

The author masterfully depicts the specter of a mansion haunted by its former mistress, & a young wife so desperate to be first in her husband's heart she nearly takes her own life when she feels her pursuit is futile.  So euphoric is she with the news that Rebecca does not (nor has she ever) hold a place in her husband's heart that she is not only content with, but ecstatic about, spending the rest of her life with a murderer even I immediately pardoned because I was so heartbroken over the narrator's struggle to cope with her feelings of inadequacy, rejoicing with her over the news that Rebecca meant nothing to Max, so little, in fact, that he killed her.

Rebecca also highlights the dysfunction that quickly develops when people fail to communicate.  The assumptions the narrator operates on for the first half of the novel drive her to distraction, & yet, not once does she approach her husband & confront him with her concerns.  She allows Mrs. Danvers (the creepy housekeeper) to manipulate her emotions & fill her head with twisted lies that she readily believes.  In her own words:

I wondered how many people there were in the world who suffered, and continued to suffer, because they could not break out from their own web of shyness and reserve, and in their blindness and folly built up a great distorted wall in front of them that hid the truth.  This was what I had done.  I had built up false pictures in my mind and sat before them.  I had never had the courage to demand the truth.

Max is dumbfounded when he realizes the turmoil she's endured assuming he was desperately missing Rebecca.  His melancholy, which the narrator has assumed was the result of continually mourning his first wife, was due to his fear that he could never have a happy life with his new bride, certain it was only a matter of time before the truth of Rebecca's death was discovered.

I am not a casual reader.  I haven't posted much lately because I've been living in books.  It's been weeks since I read Rebecca, & I guess after this post I'll let it go, for now.  Thanks again to Amy, who selected the novel, as I otherwise may've never read it.  I am currently making my way through the May book club selection, Amy Chua's Battle Hymn of the Tiger Mother, & am balancing out that memoir with a reread of A Farewell to Arms.  I picked it up to find a particular quote the other day & have been once again lured into Frederic & Catherine's captivating, beautifully written love affair.  No writer wraps me around his finger quite like Hemingway, despite his propensity to stomp all over his reader's heart.

Reagan, I encourage you to read.  If you tire of fiction after high school & college instructors have forced you to endure novels you don't enjoy, or are too young to appreciate, read biographies, poetry, a captivating series (like Twilight!), or political commentary.  Read anything & everything, & return to it later because a second assessment is usually required for all well written books.  Chopin's The Awakening was a much different novel when I read it as a wife & mother, compared to my opinion of it as a seventeen-year-old high school senior.

Finally, Reagan, never settle for being anything but first in the heart of a man who claims to love you.  Don't operate on assumptions, especially when it comes to matters of the heart, & never underestimate the power of effective communication to solve internal struggles that plague you.  Choose your love interests carefully, & never assume your worth or happiness is wrapped up in them.  Surround yourself with friends, Christian women who have your best interest at heart, & avoid those who seek to tear you down & undermine your confidence.  Never employ a live-in housekeeper, and heed the wisdom in this quote from Rebecca, "Men are simpler than you imagine my sweet child.  But what goes on in the twisted, tortuous minds of women would baffle anyone."