To begin the year, a brief discussion of pronouns.  That's right, pronouns. 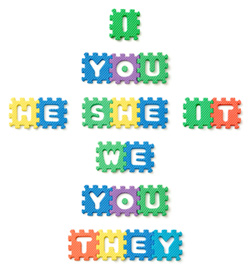 In the text I use in my English classes, there's an entire chapter dedicated to pronouns.  A pronoun, of course, is a word that takes the place of a noun or another pronoun.  Initially, students are usually perplexed that we're going to spend several class periods discussing pronouns.  Pronouns are easy, they say.  As we delve into pronoun case, a lecture that ends with the forever problematic who/whom & whoever/whomever issue, they begin to rethink their original assessment of pronouns.  Who & whoever, by the way, are subjective, while whom & whomever are objective.  Here's a hint: always think of Hemingway's For Whom the Bell Tolls.  It's not For Who the Bell Tolls, because whom is the object of the preposition for, hence = objective case.  This isn't always helpful to my students since most of them have never heard of For Whom the Bell Tolls.  *Eye roll*

If you're still reading, I'm reaching my point, I promise.  Earlier this week, I received a call from my doctor's office.  They were rearranging Dr. Sheppard's always hectic schedule & wanted to know if I could see her this week instead of next, as originally scheduled.  Given that I currently have no schedule as I've not resumed teaching, I gladly said that was fine.  They moved my doctor's appointment up a week & also offered to go ahead with the eighteen week ultrasound that was scheduled for January 10th.  Thus, it is with joy & a bit of surprise that has yet to subside as of the time I write this that I announce that Reagan's younger sibling can now officially be referenced as he.

During the early months of both my pregnancies, it was bothersome to me when people referred to the baby as it, because a baby is definitely not neuter, or gender neutral, & these instances always made me think of my pronoun lecture.  Yeah, you don't want to know what goes on inside my head.  Perhaps a word or two later about the detrimental push for gender neutrality in our culture. 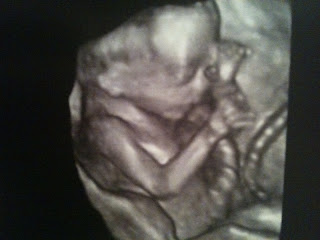 He's sucking his thumb in this one: 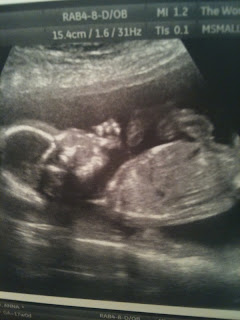 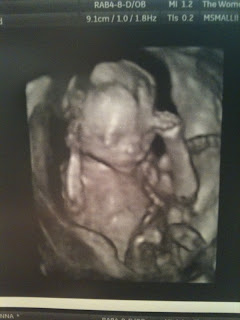 I know you can't tell he's a boy in any of these, but out of respect for my unborn child, I'm not going to post those pics online.  He's a he, I promise.  I knew it the moment the technician placed the wand on my belly.

We're told all looks well.  I am measuring a little larger than 17 weeks; I always measured a little ahead with Reagan as well.  He appears to have long limbs, like his sister, who is currently seeing eye to eye with a few four-year-olds we know.  I'm happy the appointment was moved up a week, because now I can spend my last week of Winter Break figuring out what to do with the mounds of girl clothing we've accumulated in the last two years.  My first thoughts upon realizing he is a he were these:

-Oh, I have so many girl clothes
-Now I can buy tiny argyle sweater vests
-I have a son
-It's not true that you're sicker when carrying a girl
-Only one wedding to pay for

I've got to go.  Since moving in our house a year ago, we haven't done much with the front bedroom, though the closet is full of tubs of Reagan's clothes.  The plan is to pull out all the gender neutral stuff (which is basically a few white onesies), & I guess haul the rest to the attic.  I need an empty closet to work with considering that my mom left the doctor's office after the ultrasound & headed to Spoiled Rotten to buy boys Christmas clothes on sale, size: 6 months.  Oh boy.
AZ

Posted by AZ No comments: