A letter always seemed to me like immortality
because it is the mind alone without corporeal friend.
-Emily Dickinson

Since I last blogged, a great deal has happened.  Well, maybe not, but it felt like it because I was separated from my MacBook, & a hundred times a day I'd want to sit down & type something, & again I'd mourn.

A few hours after posting my previous blog, I handed my MacBook over to the kind people at Computer Solutions in Ruston, the only authorized Apple repair folks in the area.  I was pretty sure something called the inverter cable needed to be replaced (not totally unexpected after nearly four years of trouble-free use), & I was correct.  Computer Solutions overnighted my Mac to Apple & finally, this past Monday, after a week of separation, we were reunited.  One of the first things I saw when I gleefully began surfing the web was this article on the Drudge Report @ Apple's stock setting a record.  This is the first time I've needed anything fixed on my MacBook, & I must say, they went above & beyond.  It is beautiful.

During the long week of separation, I had Internet access on my phone, but I missed having a word processor at my fingertips more than I'd imagined I would.  When I post a blog, it's typically the efforts of a few days worth of dabbling, & I had nowhere to dabble all week & felt a little lost at times.  It did occur to me that I could use paper & pen, but I guess I've become too digitized as I never picked either up.

I rarely write anything longhand; even my grocery list is in my iPhone.  While coping with the frustrations of life without a word processor, I thought about my freshman year of college, during which Trey & I began dating.  Few students in my dorm owned a computer, & no one had a laptop.  I didn't have any email addresses (I now have three that I check on a daily basis), & I used the computers in the library on campus or my parents' large desktop computer at home (on the weekends) to type my papers.  It's unimaginable to me today.

That spring, Trey & I spoke on the phone often.  These were long distance calls since neither of us owned a cell phone that didn't come in a bag, so it wasn't possible for me to live in Arkansas & maintain a 318 area code.  With our parents breathing down our necks over long distance bills, we also - get this - wrote letters.  Real paper, real pens, real envelopes, real stamps, the whole bit.

Occasionally the mood will strike, but after a decade of typing college papers, emails, & texts, it's usually frustrating for me to write longhand.  Once it's in ink, all you can do is scratch through it, or wad up the paper & start again.  There's no delete option, no copying & pasting to shift a paragraph or a sentence here or there.  The anal retentive English teacher in me adores word processors because they allow for perfection; all traces of mistakes can be obliterated with the stroke of a key.  If you think of a better word or phrase, you can slip it in unnoticed, the rest of the document undisturbed.

Every now & then, I reread some of the letters Trey & I wrote, & I guess one day I'll give them to Reagan.  They have character that cannot be achieved in an email, no matter how many emoticons you insert or how creative you are with font changes & italics.  In the same box that houses the letters Trey & I exchanged, I have a stack of letters my grandfather sent me when I was in college.  These letters were typed on the typewriter that sat atop his desk, the same typewriter he used to compose numerous letters to the editors of Monroe's paper, The News Star, & the Bastrop Daily Enterprise.  He died on a Wednesday, & I returned to my apartment that night & sat down at my laptop to begin composing his obituary.  As I clicked away, I thought of the many hours he spent in front of his typewriter.  Every smooth stroke of the keys was a reminder of the passage of time, the conveniences technology affords, & the immutability of the power of the written word to channel emotion, to shine a light on injustice, & to ignite agents of change.

In a fabulous twist of irony I think he would have appreciated, a few days after my grandfather's memorial service I sat at my laptop & composed a scathing letter to the editor of the Bastrop Daily Enterprise for failing to publish my grandfather's obituary despite my having meticulously followed their instructions for submission.


Last Saturday, prior to my reunion with my MacBook, Reagan & I joined my mom & my Papaw & traveled to El Dorado, where Reagan was reunited with her cousin Will.

Will also owns a Coupe, & while it is not pink, Reagan made herself at home: 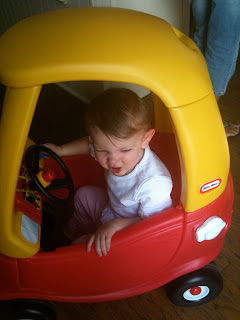 Reagan & Will, who will never know life without a word processor, with their great-grandfather, who has never used one: 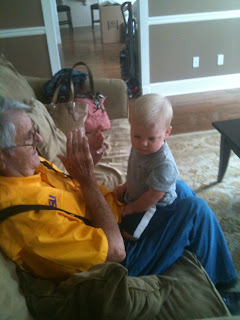 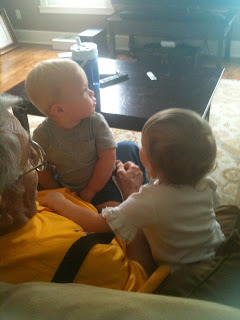 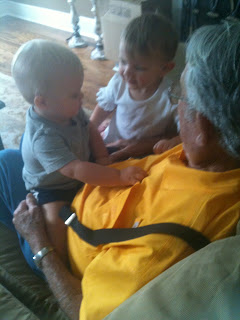 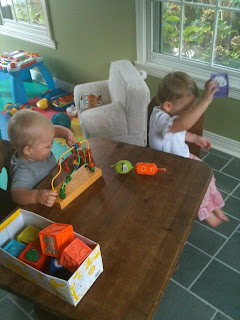 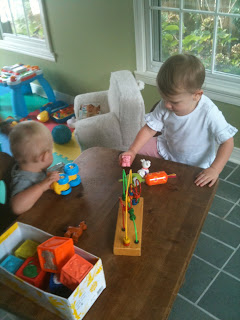 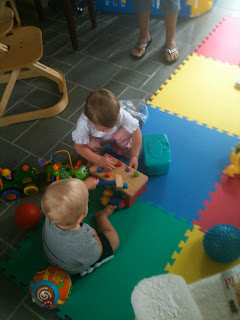 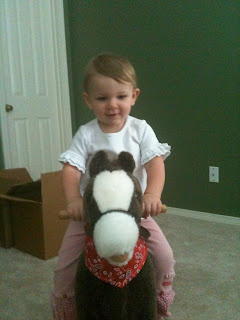 Saturday was a napless day for Reagan, so she was not in the mood to cooperate while I attempted to take a picture of her in her new footed PJs: 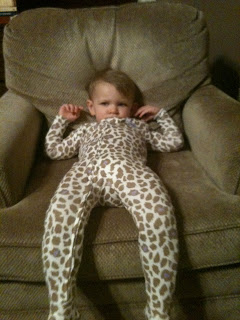 Reagan, I encourage you to record your thoughts in some way as you age.  Keep a journal, blog, write letters to the people you love, & save the letters they write you.  I promise you won't regret the paper trail.