Since political matters are the hot topic today, I'll stick with a more mundane one: the weather.

Weather is important.  Humans are vexed by weather, because we cannot control it.  We know a lot about how & why things happen, but we can't prevent them, or initiate them.  In any fictional setting that features humans playing God (The Truman Show, The Hunger Games), be assured, the god-figure(s) will meddle with the weather.  If you've seen it, you may recall Christof's line in The Truman Show, "Cue the sun."

God knows the significance of weather.  I think, aside from the flood, my favorite Biblical use of weather is when the Lord darkened the sky & shook the earth as Christ died.  Wouldn't every parent who lost a child do the same if they had the power?  God doesn't have to write His name in the sky to make Himself known; He created the sky, & He created the light by which we can see it, and He can snuff out that light at any moment.  He speaks, & the sun obeys, & the earth moves.  The Bible is, among other things, a wonderful piece of literature, & can be analyzed as such.  God appreciates symbolism, & it wouldn't have seemed appropriate that the sun remain high & bright in the sky given that the man who was present when the sun was spoken into existence was in the throes of death.


You know the significance of weather if you've participated in or are a fan of any sport played outdoors, or if you've ever planned an event to be held outdoors & then obsessively checked weather forecasts.  About ten years ago, I stood on the back porch at Squire Creek for the first time, looked out over the courtyard, & told my mother I'd be married there.  In 2009, I was (Trey also participated).  I'd always insisted my wedding & reception would be held indoors, because, while I am resourceful, I can't control the weather & I wanted to be able to control every aspect of such an important event (or relinquish control to capable people I trusted).


October of 2009 began as the rainiest Louisiana October I can remember, though unless you were planning an outdoor wedding in the middle of the month, or are a weatherman, you likely didn't take note then, & certainly can't recall now.  We were blessed with a beautiful day.  This was pretty much how I imagined it back in 2002: 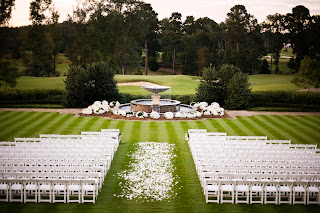 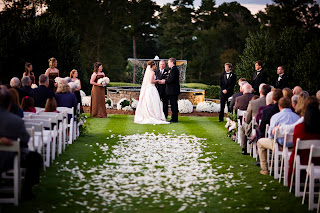 If I were to write a short story about various significant moments in my life, I'd certainly include the weather (& then what I was wearing).  I know the weather is important, because I remember it, can still feel it in some cases.  It was an unseasonably cold May Saturday in Louisiana the day I graduated from college.  It rained the night my grandfather died.  It was hot the day I took my bridal portraits.  I'm not a fainter, but came as close as I ever have standing outside in the sun in my heavy dress, attempting to follow the photographer's instructions while sweat ran in sheets down my face.  It was chilly, variably cloudy, & not at all humid the October day Trey & I married.

In some novels, weather is so significant it could be analyzed as a separate character.  I like a nice description of the current weather when I'm reading; weather plays heavily into my mood, so I want to know how it might be affecting the characters whose lives I typically immerse myself in when I read.
At present, it's summer, & all the great writers had something to say about summer.

Summer afternoon - summer afternoon; to me those have always been the two most beautiful words in the English language.
-Henry James

One must maintain a little bit of summer, even in the middle of winter.
-Henry David Thoreau

And so with the sunshine and the great bursts of leaves growing on the trees, just as things grow fast in movies, I had that familiar conviction that life was beginning over again with the summer.
-F. Scott Fitzgerald

I presume these men never spent a summer in Louisiana.  Great bursts of leaves may grow fast in movies, Mr. Fitzgerald, but in Louisiana they dry up & wither & die in the relentless heat.  Life doesn't begin over again during a Louisiana summer; life grinds to a halt while all living things attempt to wait out the oppressive weather.


I always seem to forget how hot it is here in the summer.  Every April, there is a moment when I'm excited about painting my toenails, wearing sandals, & doing other summery things.  That moment never lasts long.  I don't like the heat.  At. All.  I think John Steinbeck had the better idea . . . What good is the warmth of summer, without the cold of winter to give it sweetness.  There are Colorado residents who've spent winter after winter digging out from under snow they'd love to be buried  in right now.

While we wait for cooler temps, or even a cloud to provide enough cover for a nice walk, Reagan & I remain indoors most of the time.  We've been to the park a few times.  These below are courtesy of my sister, who took them on an unseasonably cool day in May: 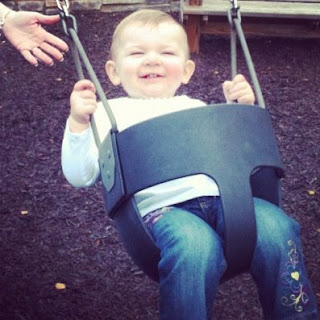 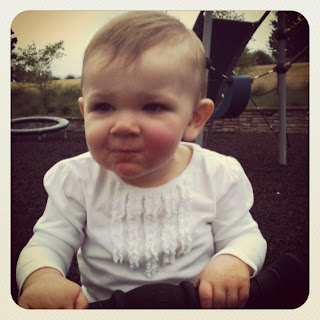 We hang out at Newk's: 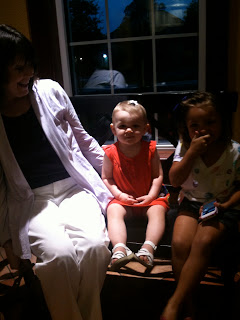 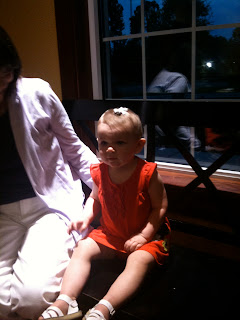 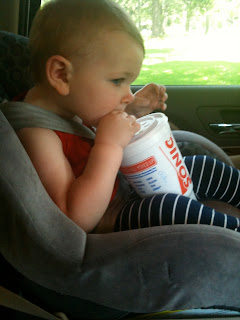 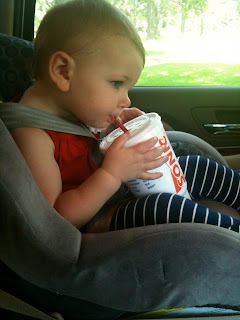 Try on hats in the Cracker Barrel: 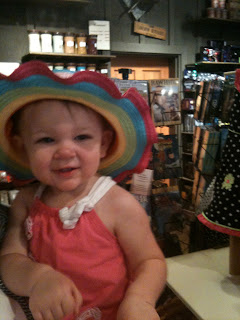 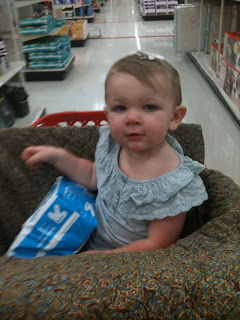 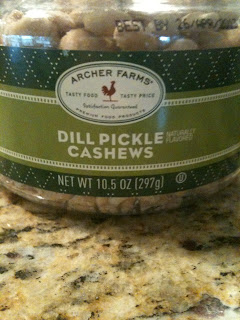 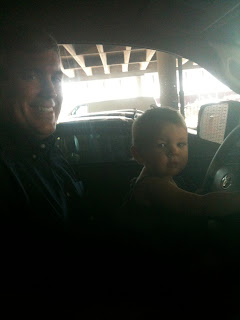 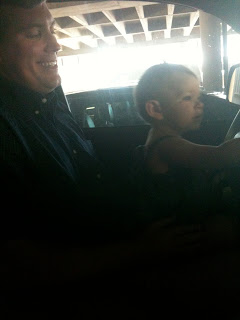 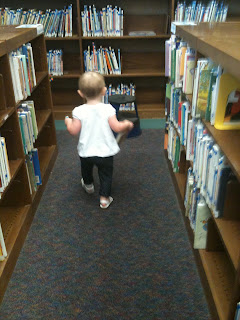 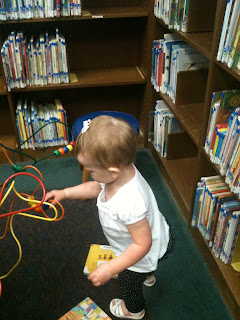 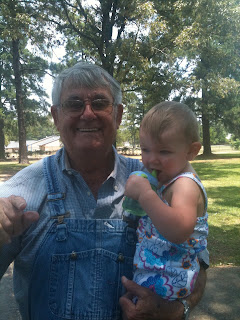 Peek out the window at the patio furniture it's too hot to enjoy: 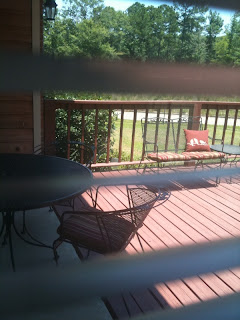 Trey & I recently saw Rock of Ages in the theater (a great place to get away from the heat, but one where Reagan is not yet welcome).  If you enjoy musicals, and/or think Alec Baldwin is hilarious, and/or enjoy boy band humor, you should go see Rock of Ages.  During the previews, I was given yet another reason to long for winter . . . a trailer for The Great Gatbsy, starring Leonardo DiCaprio as Gatsby, Toby Maguire as Nick Carraway, & Carey Mulligan as Daisy Buchanan.  Um, yes, please. 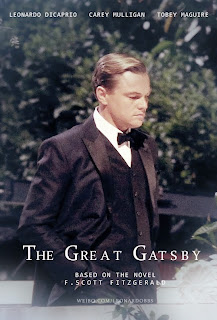 I've never given my readers an assignment, but I challenge you to read The Great Gatsby before this film is released, which I believe will be around Christmas.  If you've read it, reread it, & then watch the 1974 film starring Robert Redford as Gatsby, Sam Waterston (aka Jack McCoy of Law & Order fame) as Nick Carraway, & Mia Farrow as Daisy. 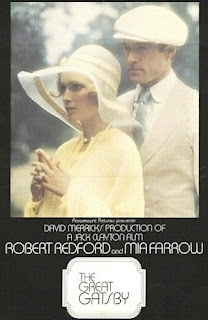 I don't know how anyone who attended high school in America escaped without reading this novel, but it's one every American needs to read.  It should be required reading in both literature and American history classes.  I read it in high school, but it wasn't until I reread it in my American Novel class in college that I realized how grossly I'd underestimated Fitzgerald's work.

Weather, of course, plays an important role in The Great Gatsby.  The novel opens as summer begins, and Fitzgerald correlates the rising heat with Gatsby's hope of a future with Daisy, his long lost love.  It's raining the first time Gatsby is reunited with Daisy, but as the awkwardness between them dissipates, so too does the rain.  Gatsby confronts Tom, Daisy's husband, on what the reader is told is the hottest day of the year.  You get the drift.

If things go as planned, The Great Gatsby will be the December book club selection.  I'll sweeten the pot: if you read the book, you can be an honorary member of the book club & come see the film with us & listen to me prattle on about symbolism.

At its heart, Gatsby is a novel about the disillusionment that inevitably creeps in when people are motivated by material gain and relentlessly pursue pleasure, ignoring signs of disaster looming ahead.  What an excellent time to bring the novel to the big screen again.

Never go on trips with anyone you do not love.
-Ernest Hemingway, A Moveable Feast

A Moveable Feast is a set of memoirs about the years Hemingway spent in Paris in the company of literary giants like F. Scott Fitzgerald, Ezra Pound, & James Joyce.  The title of the memoirs was taken from a quote attributed to Hemingway's friend & biographer A.E. Hotchner, who is credited with informing Hemingway that, "If you are lucky enough to have lived in Paris as a young man, then wherever you go for the rest of your life, it stays with you, for Paris is a moveable feast."

To borrow Mr. Hotchner's sentiment, my life is a feast, a constant, unending array of one delectable morsel after another, & last week the table was set in Destin, Florida.  For a week, Reagan had not only her father & I to look after her, but four grandparents, two aunts, & one uncle as we all descended on a rented home in SanDestin, a resort community in Destin I've loved a long time.