I Got A Name

A good character is the best tombstone.
Those who loved you and were helped by you
will remember you when forget-me-nots have withered.
Carve your name on hearts, not on marble.

Last summer, Trey & I visited California, a trip I catalogued here.  We spent our last night there in San Diego, & we ate dinner at Croce's, a restaurant owned by the widow of the late Jim Croce who recorded the above lyrics for his 1973 album I Got a Name.

If you think names are inconsequential, you've likely never spent time around an expectant couple, or been the student who, on every first day of class, had to correct the teacher's pronunciation of your name (or, alternatively, bear in silence its mispronunciation for months & months).  If you think names are inconsequential, you've probably never had a conversation with a woman who chose to hyphenate hers.  You may recall that the feud that sparked one of Shakespeare's most famous lines, " . . . that which we call a rose, by any other name would smell as sweet," was inspired by two warring families, generations forbidden to one another because of their surnames.

Reagan, last night your great-granddaddy Zeigler died.  When my mother's mother died, I was about five weeks pregnant with you.  I sat at my grandmother's graveside knowing there was life stirring inside me.  Again, I find myself in the throes of one of life's poignant moments.  Life & death shadowing each other, whispering hello & goodbye as generations shift within & around me as I carry the very feisty great-grandson of a fine man whose candor was always tempered with a genuine smile.  I see both - the candor, & the smile - in my husband, & I love them equally.


Trey with his parents & his Granddaddy Zeigler on the day I took their name: 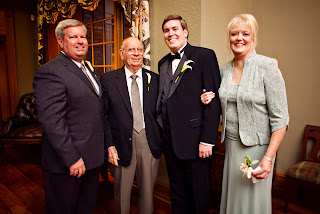