When I was a senior in college, one of the last upper level English courses I took was American Novel.   As was typically the case in an upper level English course, a large part of my grade depended on the final paper, the topic of which was largely at my discretion.  I knew I wanted to focus on A Farewell to Arms, one of the novels we'd studied, & I met with my professor to hash out further details.  What I discovered after meeting with him & reading some of the critical articles he suggested was that it isn't the novel's narrator, Frederic Henry, who draws me in & captivates me; it is Catherine Barkley, the nurse who becomes the object of Frederic's affection.

There is an army of literary critics who have no love for Miss Barkley, & for years after the novel's 1929 release many critics argued that she is proof that Hemingway was a misogynist incapable of writing a strong, admirable female character.  As I immersed myself in the criticism of Miss Barkley, I was a bit dismayed, & then increasingly agitated.  I read & read, & then returned to my professor's office, my frustration likely written all over my face, & told him I didn't agree with much of anything in the articles he'd suggested I read.  He smiled & then replied, "I didn't think you would.  Now, tell me why."

So, I did more digging & discovered several literary critics whose assessment of Catherine Barkley (& Hemingway) I found myself smiling & nodding over.  That's all literary research is: critics who irritate you so much, & with whom you disagree so vehemently, that you're determined to prove them wrong & track down any legitimate literary critique that bolsters your opinion.  It's similar to that "Oh, you too!" moment when you realize someone loves the same book you do, & for the same reasons.  In layman's terms, I was on Team Catherine, & I was in search of legit scholars to join my team so we could all wear matching shirts & wag our fingers at the Catherine-hating, Hemingway-bashing feminists.

I won't rehash my entire paper here & tell you why I adore Miss Barkley.  Believe it or not, what agitated me the most (& agitates me still) was not that many critics find nothing redeeming about her; what galled me was that some feminist critics go so far as to suggest that to view her as anything other than a silly, vapid woman is folly on the reader's part.  So not only is Catherine seriously flawed, I am too because I don't agree with certain critical opinions of her.  Three cheers for feminism; it's heartwarming when those who clamor about making choices scoff at you when you reach conclusions that differ from theirs.

It's been over a decade since I wrote my defense of Catherine Barkley, but all this came to mind this past Saturday when I saw this video posted on the Drudge Report.  If you've not heard, a handsome man named Paul Ryan was chosen as Romney's running mate in this year's presidential election. 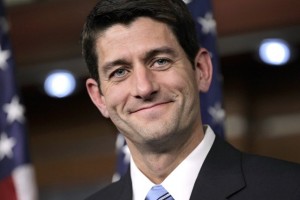 With a flash of this dashing statesman's smile, the month of August just became exponentially more interesting.  He's young, he's pro-life, & he's passionate about the need for sound fiscal policies & a sensible budget.  Did I mention he's handsome?

In the spring of this year, a few young ladies who describe themselves as, "just a few 20-something women who think fiscal sanity and conservative values are sexier than anything else" (can I get an Amen?) took notice of Mr. Ryan & began having some fun online with this tumblr.  Titled "Hey Girl, It's Paul Ryan," here are some of my favorites: 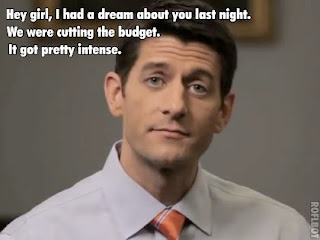 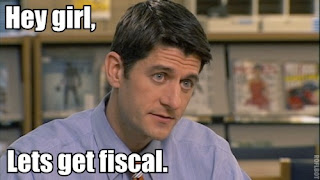 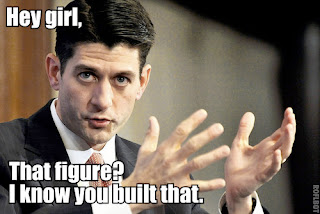 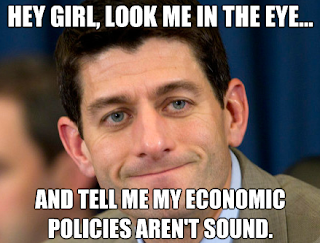 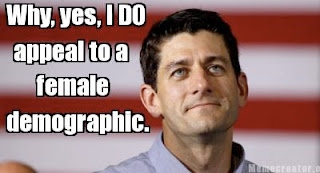 Do these graphics add much to the public discourse?  No, not really, but young, conservative women gushing over the blue-eyed, pro-life, number-crunching, fiscally conservative VP nominee is likely making some in the liberal establishment cringe in horror, & that makes me smile.  Widely.

Naturally, not everyone is as excited about Ryan as I am.  In the video referenced above, NBC's Andrea Mitchell declares that Ryan is not a choice for suburban moms, & in fact, not a choice for women, period.  Whew!  Thanks, Andrea.  You've relieved the women who were preparing to listen to what Mr. Ryan has to say, read about his legislative history, & make a decision for themselves of a heavy burden.  Thanks for freeing up some time for us, Andrea, especially the suburban moms who're super busy being loving wives & mothers.  Between grocery shopping, changing diapers, & destroying the environment with large SUVs & minivans, suburban moms need informed women like Ms. Mitchell to make grandiose pronouncements about national leaders.


Ms. Mitchell's dismissal of Mr. Ryan is one of a slew of examples of exactly how much liberals value choice.  Reagan, don't believe anyone who tells you that feminism is about choices.  That is a lie.  Many who operate under the cloak of 'feminism' & the mantra of 'what's in women's best interest' believe the only choice you're entitled to make, & make with impunity, is whether or not to end the life of any unborn children you find yourself carrying.  Other areas aren't so clear cut.  You can choose to rally around & vote for whomever you please, but don't expect your choice to be celebrated by those who claim their only agenda is securing & celebrating your right to choose; in fact, expect to be mocked. You can choose to marry & stay home with your kids, & maybe even homeschool them, but don't expect that choice to be celebrated by those whose goal is the indoctrination of children via the increasingly liberalized public school system.  They kicked God out & invited Darwin with open arms, & they are none too happy with the increasing number of parents opting for private education or homeschool.  Those aren't choices they celebrate.  They don't celebrate the individual consumers' choice to patronize businesses whose values align with their own; they ridicule that choice.  It's only about choice when you make the choices they deem appropriate, & when you don't, you're a bigot, a racist, etc.

Pay attention to those whom the media sweepingly dismiss as "not a choice" for large swaths of the voting public - "women," "blacks," "blue collar workers," etc.  (& if you belong to one of those groups, be offended when someone presumes you all reach identical conclusions about important issues, or rely on the likes of Andrea Mitchell to determine what's in your best interest).  When the media are eager to dismiss an individual, there's often excellent reasons why, reasons that have nothing to do with the individual's actual qualifications to lead "women" or "blacks" or "blue collar workers."  Instead of listening to Andrea Mitchell, many women, many Americans, will be listening to Paul Ryan in the coming months, & I think Ms. Mitchell knows this & is afraid they might love what they hear.  Ms. Mitchell knows Mr. Ryan is likely to be a major player on the national scene for years to come, & I'm guessing that, no matter how loudly she claims to value 'choice,' she despises that many will decide to listen to him.  With statements like "Our rights come from nature and God, not from government," &, "we promise equal opportunity, not equal outcomes," I'm listening.

A final note on choice.  Obama chose Joe Biden as his running mate, & it appears he's sticking with him; Mitt Romney chose Paul Ryan.  I didn't expect the Ryan pick.  He's a white guy & he's from a state that hasn't turned red in a presidential election since Ronald Reagan was reelected in 1984.  There is no obvious tactical advantage to adding Ryan's name to the ticket, aside from the potential for some women to vote for him because he is, as has been noted, handsome.  Let's consider for a moment the possibility that Romney selected Ryan because he believes Ryan is qualified to serve as this nation's president, should the need arise.  Huh.  Crazy, right?  For several years, those concerned about the direction of our nation have been collectively asking what could be worse than Obama as president; have we reached the bottom?  I submit to you the answer might be Joe Biden as president, which is one heartbeat away from being a reality.  This is a sobering fact.  The men Obama & Romney have chosen to be their successor, should one be needed, say a great deal about their ability to make decisions that carry national, even international, implications.  For a comparison of the men Obama & Romney hand-picked, tune in to the VP debate on October 11th.  I've already bought my popcorn.