I spent my freshman year of college at Harding University in Searcy, Arkansas.  As an English major, I was required to take a course titled "Introduction to Literature."  We read a little bit of everything, & even dabbled in some film criticism.  My professor, a film connoisseur, showed us clips of several movies, some of them 'R' rated.

Harding is a private Christian university.  Students are expected to attend chapel daily & enroll in a Bible class each semester.  It was not completely shocking that a young lady in my Introduction to Literature class raised an objection to the viewing of R rated films.  After politely signaling that she wanted to speak, she informed our professor, & the entire class, that she never watched any film rated R.  What followed was an interesting exchange between this usually soft-spoken young lady & our professor, the latter arguing that the young lady was needlessly keeping herself from an array of wonderful movies.  He cited several films that attempt to realistically depict war in all its brutality.  It's history, after all, he stated.  I was thinking more along the lines of how tragic it was that she'd never seen When Harry Met Sally, but I kept my mouth shut.

Her argument, of course, was that she didn't want to be exposed to the foul language, nudity, & violence that typify R rated films.  This was in 1999, & if she's still sticking to her guns, she's probably had to swear off PG-13 films as well.  A few months ago, I saw The Vow, a PG-13 film, & in addition to a decent film, I saw Channing Tatum's backside in all its glory.

I will always remember their class discussion.  At eighteen, I sat quietly with the other twenty or so students who didn't dare insert themselves into the squabble.  I know almost everyone in the room had an opinion, but for various reasons (one of them likely being that the class met at 8AM), we all sat, watching & listening, our heads collectively rotating as the young lady & our literature professor went back & forth about the Christian's plight to be in this world, but not of this world, & exactly how that might pertain to a literature student.  You'd have to eliminate a great many of the classic works of literature, as well as a significant number of wonderfully made films (some of which are adaptations of novels), in order to steer clear of foul language & adult themes.

I don't know that there is a right answer to the questions raised by their discussion, but since having Reagan I've returned to their conversation & the arguments each of them made several times.  One day, Reagan will be able to decide for herself what she wants to expose herself to, & the weight of the knowledge that it is my responsibility to ready her for that day is sometimes almost crippling.  Nothing makes you reevaluate your own standards like a toddler peering over your shoulder.

My parents didn't allow me to watch R rated films for years.  At thirty-one, I've seen my fair share of them, & with some noted exceptions, I wasn't missing much.  I was recently scanning the guide on TV to see what was on, & noticed that Pretty Woman was on The Family Channel.  I paused & scrolled back up to see if I'd read right, & I had.  Pretty Woman is a movie I've seen countless times, & in terms of entertainment value, it's not bad (insert mental picture of Trey coughing & choking on his Diet Coke here).  It earned an R rating when it was released in 1987, but would certainly not today, in my opinion (although it has no place on The Family Channel).  America had higher standards for everything in 1987, it seems, from movie content deemed 'Restricted,' to presidents.  Perhaps there is language in the film that I'm not remembering because most of my viewings of the movie have been on cable, so possibly it was edited out, but I'm sure it was the (ridiculously inaccurate picture of) prostitution depicted that cemented the film's rating.

Last Thursday evening, I was again reminded of my classroom experience at Harding.  My book club met to eat dinner & discuss May's selection, Amy Chua's Battle Hymn of the Tiger Mother.  Perhaps more on that later.  After discussing the merits of Ms. Chua's book, the conversation shifted to what our next selection would be.  I'd perused a few book lists to see if there were any selections I wanted to suggest, & with few exceptions, there wasn't much I felt comfortable recommending to a group of Christian women.

Pay attention, because I likely won't ever type these words again, but when it comes to books, & films too, to a lesser degree, & what I choose to expose myself to, I am a tad liberal in my views.  I will read anything, or attempt to, at least once, regardless of language, violence, etc.  I am infuriated by people who suggest Mark Twain's work should be kept out of classrooms because it contains racial slurs.  There is something to be said for authenticity, in my opinion.  The original text of Hemingway's A Farewell to Arms was littered with profanity that his editors omitted, & their omissions remain in tact in copies of the novel today.  There were a few copies Hemingway corrected by hand, inserting the foul language where his editors had placed  - -  .

The novel, arguably Hemingway's best, is about a disillusioned, injured soldier who falls in love with a nurse who bears her own emotional scars from the war.  The story is beautifully written without the curse words, but when it comes to word choice, I'm not one to question Hemingway's decisions.  The man's use of the English language is unparalleled, his ability to say so much in so few words unrivaled (& it's ridiculous to ask a reader to pretend Frederic Henry's language is tempered).  It is largely because of Hemingway's writing that I never give my English students a word count for their papers.  So often, more words does not equal more.  No, they're not Hemingway, but I tell them to write an essay that satisfies the prompt & pay no attention to word count.

In addition to the foul language (some remains after the edit), the book is full of sex outside of marriage (resulting in the conception of an illegitimate child), alcohol consumption, the general crassness of soldiers, & the violence of war.  It is, in my opinion, one of the most brilliant American novels ever written.  There are a lot of books I love, either because of the well developed characters, or the plot, or both, but sometimes I find myself criticizing the author's word choice, sentence structure, etc., or growing frustrated after reading a chapter that could have been summed up in a paragraph.   I suppose that's one reason, despite the bleakness in the novel, that it's relaxing to me reread A Farewell to Arms.  It's flawless.  I can only imagine what he might have written had Hemingway experienced healthy, functional relationships with women & drank a little less, but had that been the case he may not have written at all.

If a film has merit, I will watch it, & I will read a book that interests me despite words or situations I might find offensive/immoral/grotesque.  However, when I started digging for something to recommend to the book club for the month of June, I got no further than my Jane Austen collection (& did in fact recommend we read Sense and Sensibility at some point, if only so that we can all meet & watch the fantastic Emma Thompson film).

It's different when you're making decisions for other people whose sensibilities likely deviate from your own.  I sometimes wonder if my literature professor at Harding had ever given thought to that prior to a young freshman challenging his decision to show portions of R rated films in his class, a class she was paying a lot of money to attend at a private, Christian university.  While I think there is a valid argument to be made that boundaries should be pushed inside the classroom, no one wants to be the person who recommends the church book club read something full of foul language or explicit sex, & every parent grapples with what to allow their child to read/watch when the child hasn't yet reached the age at which they can decide for themselves what they want to consume.  I set my limits, my Harding classmate set hers, but children don't know enough about the world, or themselves, to do so, & while they may resent their parents for setting limits for them, hopefully Reagan will, as I am now, be thankful for the guidance when she's older.

At some point, Reagan will want to read something or watch something & I will say 'No,' or more likely, 'Not now.'  Currently, her grown-up activities include being allowed, on occasion, to dig through my purse: 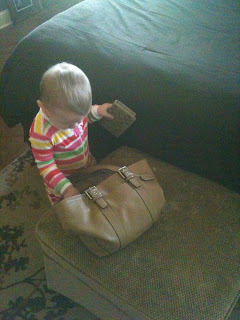 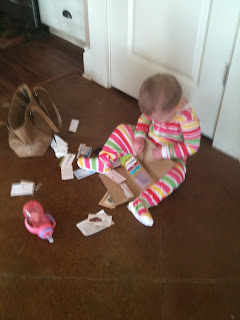 And to walk (as opposed to being carried or strolled) in public places as long as she's holding someone's hand: 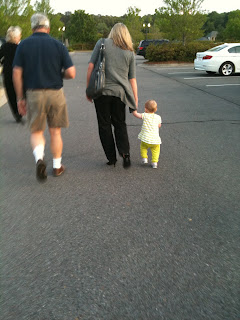 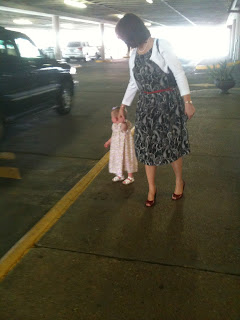 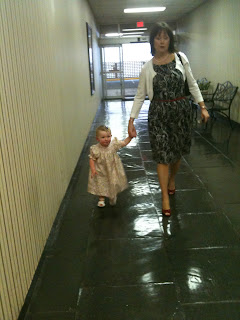 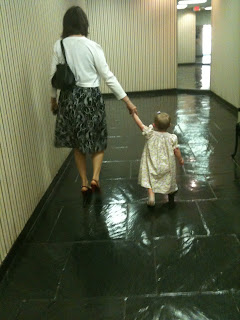 I hope when Reagan begins making decisions about what she'll consume, she knows herself well, & thus, her limits, & she can respectfully & articulately explain those limits to those who question them, as did my Harding classmate.  My sister read The Hunger Games, but hasn't finished the last two books in the series because she was put off by the violence (picture me aghast).  I can't imagine stopping after book one, but that's me.  Clearly my sister did not jump on the Peeta bandwagon with the enthusiasm I did.  The series is admittedly disturbing on many levels, but, in my opinion, the best novels are somewhat disturbing & confrontational (& a happy ending is optional).  Let the psychoanalysis of me begin . . .

I am sure at some point during her teenage years, Reagan will print a copy of this post & wave it in my face, at which point I'll sit down with her & read A Farewell to Arms aloud.  It's better than any R rated film, & just as scandalous.