Learn To Be Still

I crave stillness.  Some days, I crave it so much I'm willing to get up early to experience a few motionless minutes alone.  All of my indulgences require a lack of motion: reading, writing, coffee drinking, & surfing the web.  Even chocolate tastes better when you can sit & eat it rather than shoving it in your mouth on the fly.

I never realized how much I enjoy being still until my Reagan learned to walk, & now that she is merrily mobile, she is in constant motion all day long, aside from when she is asleep.  I never nap when she does anymore, but her naps are as refreshing for me as they are for her, & usually both of our moods depend on how long she naps.

Last week was full of a few poignant moments that gave me pause.  Returning from church Sunday before last, Trey was forced to stop the truck while a herd of dairy cows - yes, cows - were herded across the road.  Naturally, I took a few pics (while I thought about the fact that my husband drives a large truck which we were forced to bring to a halt for cows): 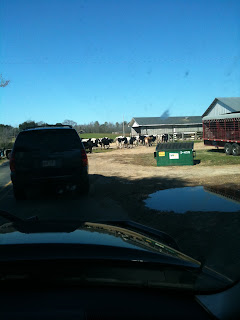 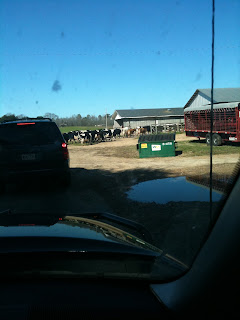 As I was moving about the house on Monday, keeping up with Reagan & trying do other productive things, I kept hearing a thud.  Once Reagan was asleep, I investigated further & discovered a small bird was repeatedly flying into my bedroom window.  I have a chair on my side of the bed, my 'still' chair if you will, so I sat for awhile & watched the bird hurl itself against the window again & again.  It would peck lightly with its beak for a few minutes, & then fly back a few feet & try to burrow, headfirst, through the glass.  I watched the bird, sipped my coffee, & confronted the reality that, at 31, I am becoming my grandparents.  I was so curious that when I went to get the mail, I walked around the side of the house to see if there was a nest or anything else that could explain the bird's attachment to my bedroom window.  I could see myself in the window, so I suppose the bird was trying to get closer to the attractive bird in the window. 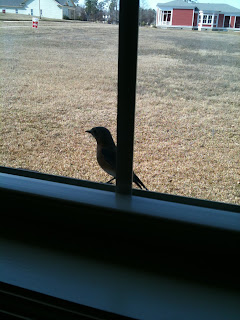 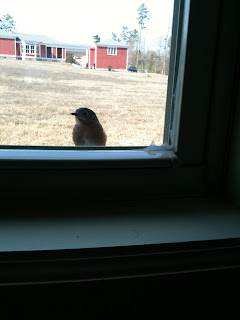 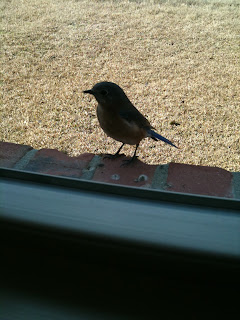 On Tuesday, Trey, Reagan, & I attended a birthday party for Trey's Great Aunt Helen.  She was celebrating her 95th birthday.  Ninety-Five.  95.

This is Trey & I with Aunt Helen: 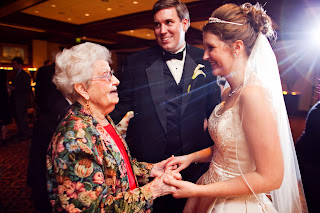 I had no idea she was 92 when she attended our wedding. 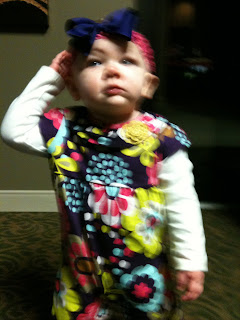 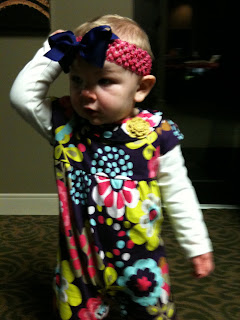 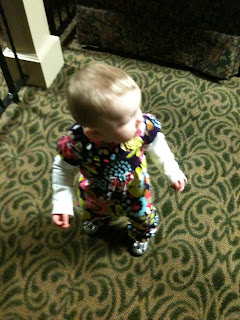 Waiting for the birthday 'girl' with her Grandmama: 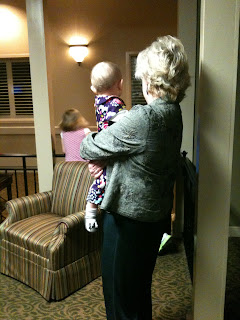 The guest of honor: 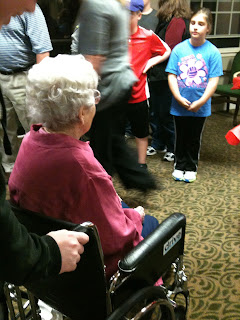 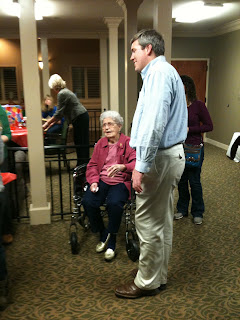 These four are siblings.  To the far right is Trey's grandfather, Donald Zeigler (the original), to his right is his sister Janet, then Helen (the oldest of the siblings), & then Jack. 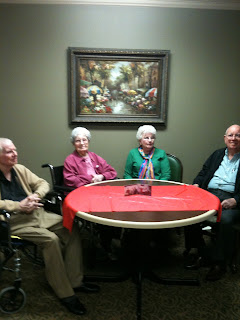 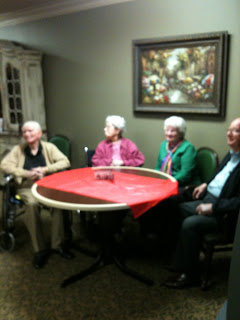 Reagan got her hands on two sets of keys early in the evening & spent the entire party walking around with both hands in the air clutching a set of keys in each.  Watching her makes me tired, so I am guessing these four rested well Tuesday night.

Sometimes, she is still: 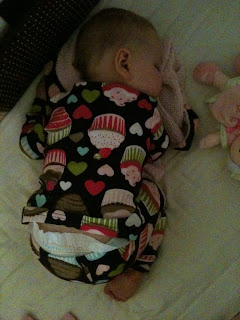 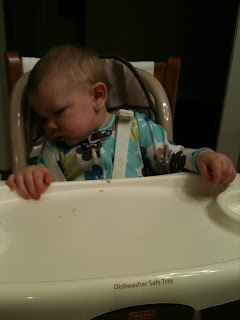 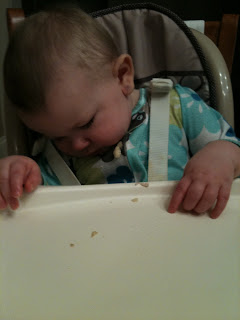 I think about the verse "Be still and know that I am God" a lot these days.  I believe it is in Psalms.  Watching Reagan, I think I better understand how we must tire the Lord, & yet He remains patient with us.  While our physical activity slows as we age, mentally, most of us are in a constant state of chaos.  I hear myself say "Be still" so often now (when she's eating, when I'm dressing her, when I'm changing her diaper, when I'm trying to buckle her in her car seat), that I think about the fatigue & frustration God must experience when we refuse to slow down and give Him a moment in the day - to pray, to say thank you, to simply acknowledge that He is God, that He is everything.

Trey & I both love the Eagles (as in Don Henley, not Philadelphia).  One of the first things Trey bought me was the Eagles Greatest Hits Volume II (on CD . . . we're not that old).  When Trey was in law school, we saw the Eagles in concert in Biloxi & were probably the youngest people there, & by several years.  It was amazing.  They had no opening act, so we walked in shortly before 8pm & there, right in front of us, was Don Henley singing "The Long Run."

The Eagles sing a song titled "Learn to be Still," & these are the lyrics:

There are so many contradictions
In all these messages we send
(We keep asking)
How do I get out of here
Where do I fit in?
Though the world is torn and shaken
Even if your heart is breakin'
It's waiting for you to awaken
And someday you will
Learn to be still
Learn to be still

I love this song.  One of the reasons adults busy themselves constantly, in my opinion, is to avoid dealing with the realities that creep in when we stop & take time to think.  Turn off the TV, shut down the computer, the iPod, & listen.  The Eagles are a secular group, & I have no idea if any of them profess to be Christians, but this song references the common metaphor of sheep without a shepherd.  "We don't know how to be alone," the lyricist asserts, which leads to "following the wrong gods home."  Many in our culture are so dissatisfied with themselves & desperate for hope that they latch onto anything & anyone as their "new messiah."  We're currently witnessing the fall of one such starry-eyed messiah who rose to power with no credentials or experience, a teleprompter, & a few worthless, empty slogans, & even emptier promises.

My advice for Reagan is to learn to be still when you're young.  Learn to be alone, & to love it.  Take time to do a few things you really want to do before you marry and have kids.  Most importantly, acknowledge your Creator, your Shepherd, & always make time in your busy schedule to worship Him.  Don't look to the world for a messiah, because you will be disappointed every time.

God cannot give us a happiness and peace apart from Himself, because it is not there.  There is no such thing.