Gold: The Hardest Hue to Hold 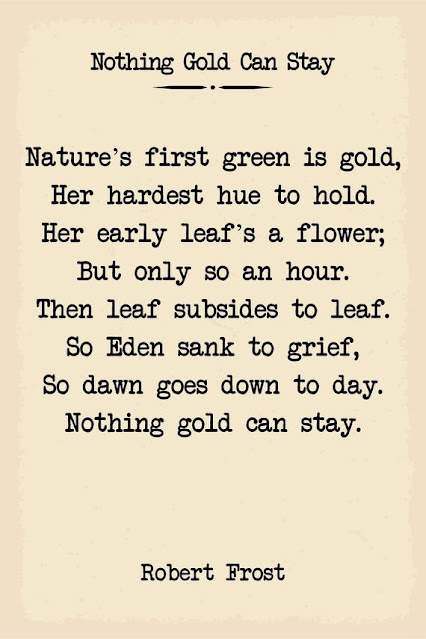 I woke up yesterday morning with Robert Frost's "Nothing Gold Can Stay" running on a loop in my head. Frost was an American, so I don't teach his poetry, but it didn't take long for me to figure out the connection. I was perusing Facebook while I sipped my coffee, and I stumbled on this photo. 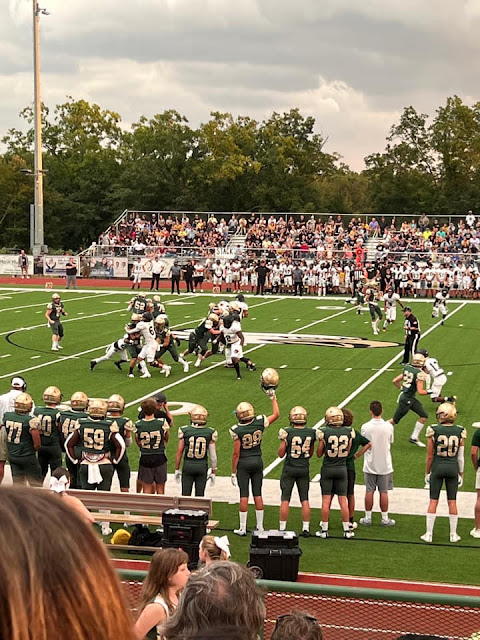 This past Friday I was given a gift, or perhaps a better way to phrase that is I was reminded on Friday of what a gift my life is. I don't simply mean that I am alive; I mean I am surrounded daily by exceptional people who inspire me and challenge me, and many of them are not yet twenty years old.

I am going to attempt to weave a handful of threads in the next few paragraphs, and as is always my hope when I write, I pray when you reach the end I have said what I intended to say with clarity. I must, like Hemingway, embrace precision and brevity as I write today because I need to purge myself of these thoughts and then address some teacher-related matters before the sun rises tomorrow on a new school week.

As many of you reading are aware, during the opening quarter of the opening game of his senior season of football, a young man named Chad, a young man who sits in both my English class and my speech class, broke his leg. It all sounds routine: a high school football player suffers an injury that likely ends his season. Sad stories of this nature are not uncommon. What is not common are young men like Chad and the young men who surround him both in life and on the football field.

In the spring of this academic year I will, the Lord willing, walk Chad and his classmates through Lewis's The Screwtape Letters. There is so much wisdom to be gleaned from that book, but I tell students my prayer is they walk away from it remembering these two things:

My time is not my own.

My body is not my own.

What does this mean? It means we are here, daily, constantly, at the pleasure of another, of the Lord who created us. I watch these seniors day in and day out, and early in the year I am overwhelmed  by the desire to tell them to slow down and savor every moment. This year will be over in the blink of an eye, and truly we are not promised tomorrow. We will enjoy another Homecoming, another football season, another spring together, if the Lord is willing. We are not promised another day, another snap of the football, another month of health. The only constant is change, as we will discuss when we read Percy Shelley's poem "Mutability." The only exception to the truths that enslave all of us, the reality of our mortal, frail, aging bodies that we are told will return to dust, is the Lord who created our bodies, the Lord who created the very air we breathe. He is the same; He is the constant, and this is why you cannot anchor yourself to anything or anyone else.

I have had discussions in the past with young men who played and loved high school football. The last time they remove their helmet and their shoulder pads, those weighted shoulder pads that serve as both protection and an anchor, it is an emotional thing for them. The truth is, no one knows when that last moment will come until it is in the past. The goal, if you play high school football in the state of Louisiana, is for that moment to come on the floor of the Louisiana Superdome, but life, like the game of football, is unpredictable no matter how carefully we plan and how hard we prepare our bodies for the struggle.

Britain's Queen Elizabeth II died last week after a seventy-year reign, the longest of any monarch in that nation's history. If you're my student and you're reading this, you're about to learn more than you ever wanted to know about the British, their literature, and the long, sordid history of their monarchy. For years, people knew, intellectually, that Elizabeth would die, but a common sentiment I read this past week was, "I thought she would live forever." Today is September 11. I was twenty years old on September 11, 2001, and I remember vividly being glued to the television in the hours and days after the attacks that day. I remember the debate among news commentators regarding the likelihood the towers that comprised the World Trade Center would fall. They were constructed of steel, and there were a fair share of talking heads convinced they would not collapse despite the gasoline-fueled inferno that raged within them. That speculation ceased immediately as the world watched both towers collapse by day's end.

My point, and I do have one, is that be it the mighty Roman Empire that we've been discussing in class, the seemingly immortal Queen of England, or towers made of the toughest steel, to borrow Frost's sentiment, "nothing gold can stay."

If you play football for Ouachita Christian School, the final helmet you wear as an Eagle is a gold helmet. I highly doubt the gold-helmet tradition was begun by someone overly attached to the poetry of Robert Frost, but the second line of that poem has been with me all weekend after watching Chad's teammates hoist his gold helmet in the air for the duration of their game Friday night, a game they dominated, and a game Chad watched from the endzone a mere forty-eight hours after having major surgery on his leg. Teenagers are not known for their appreciation of symbolism, and while they may not (yet) be able to churn out paragraphs about symbolism, they innately understand it.

We cannot control so many things, including the frail nature of our bones and our bodies. In the same way I'd give Reagan my pancreas to eradicate her diabetes were this possible, I'd give Chad my healthy leg. I would. I'd happily and patiently wait for my injured leg to heal while watching him run, run, run the ball for the duration of his senior season of football. Chad's leg will heal, but it is impossible to know at this moment if it will heal in time for him to slip on that gold helmet again.

What we can control is how we respond to adversity. We can control our individual reaction to setbacks, and a team, when faced with setback after setback, can choose to slowly fall to pieces or choose to press forward, to dig deeper and fight harder knowing there are many sets of eyes on them, watching how they respond when their backs are against the wall, when emotions are high, when you're only a game into the season and it is tempting to allow a growing list of injuries to demoralize you.

Gold is nature's hardest hue to hold. Frost is correct about that. Gold is also prized for its beauty. Gold is reflective of light. Gold is able to conduct heat and electricity. Gold is malleable. I watched young men, an arm raised high above their head, make sure Chad's gold helmet was reflecting light every moment of Friday night's game, a game against a long-time rival, a game they won by twenty-eight points, Chad's number that was noticeably missing from the sidelines. When fatigue set in, the helmet was passed to another waiting arm.

I Timothy 4:12 states, "Let no one despise your youth, but be an example to the believers in word, in conduct, in love, in spirit, in faith, in purity."

I admit there are moments in the classroom when my mood might be accurately described as, "despising their youth," but I come back every day because I do love them a lot, and there are so many things they teach me. More than once during COVID I hopped on social media to argue for the continuation of high school sports. Football is my favorite sport, and football players will always find a friend in me (this doesn't mean you don't have to do your work). The lessons they learn playing football will be with them for life, but what is not discussed as often as the lessons the players learn are the lessons they can teach us, the onlookers in the stands, lessons taught without uttering a word but simply by accepting a gold helmet from a teammate whose arm was tired. 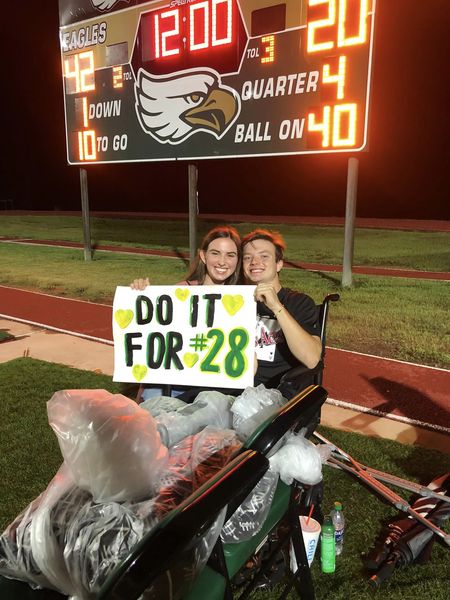