The Contempt of the Sophisticated World 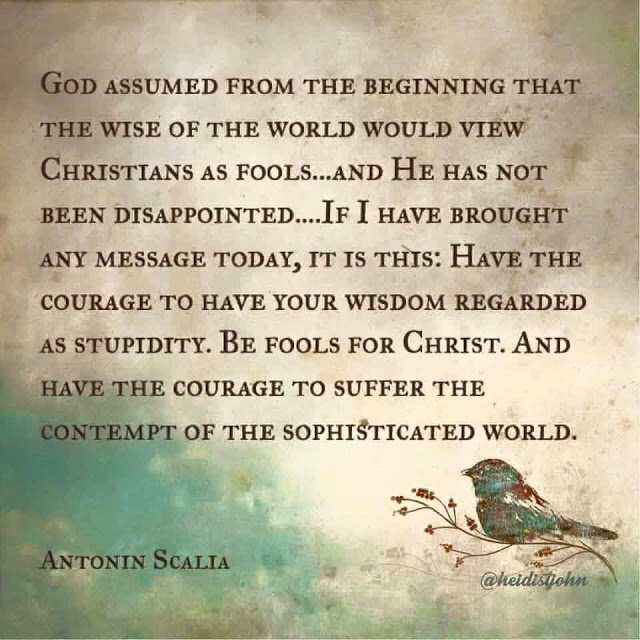 I am at the beach. That's a little disclaimer to let you know this won't be long. I have just a few things to say. I could say a whole lot, but I am on vacation, & so the plan is to be on vacation. The kids are on Fall Break until Wednesday, & we had this vacation scheduled long before we knew it would coincide with Supreme Court drama. If you want a lengthier diatribe about America's throwdown over a Supreme Court seat, you can read what I wrote last week. Click here for that.

Not only am I technically on vacation, I am also tired, & it's not just the usual tired. As it turns out, a weeks-long confirmation battle that in no way personally involves me is a taxing thing.

But you know what? It felt personal. I told someone a week or so ago that this whole ordeal felt like more than politics as usual; it felt like a battle between good & evil. Usually partisan political stuff is a frustrating choice between a bad option & an even worse option, & this is (one reason) why many people don't pay much attention to politics on the regular. Twenty-million people watched Dr. Ford & Justice Kavanaugh testify.

One reason I won't say much today is that I suspect I am not done processing it all. Last night on Facebook a friend & I discussed the fact that we're still in shock. The whole thing was one shocking event after another; the blows just kept coming.

I am not ignorant of history, & so I know the details of Clarence Thomas's confirmation hearings, & I know the tale of Robert Bork. I was not shocked by the eleventh hour Hail Mary to scuttle Kavanaugh's nomination, at least not at first. I was surprised that Democrats doggedly kept plugging away even as Dr. Ford's initial story unravelled, as nearly every detail changed, & then changed again. I guess once the ball was rolling, they were going with it no matter what. I thought they'd put distance between themselves & the outlandish claims that were made, but no. No, Kamala Harris & Dianne Feinstein stood in the Capitol Building & accused Justice Kavanaugh of gang rape. The media attempted to paint the fifty-something appellate court judge as an alcoholic frat boy because he, by his own admission under oath, sometimes drank too many beers when he was younger. They insinuated he had many deep, dark secrets that had escaped the FBI's notice six times. They demanded a seventh investigation, & the only new information it seems to have uncovered is that a friend of Dr. Ford's pressured a witness to change her testimony regarding whether or not she attended the party at which Justice Kavanaugh allegedly assaulted Dr. Ford.

Despite the facts, I had low expectations of many in Washington. The noise the media makes is loud & disorienting, & I imagine this is amplified for those who spend much of their time in the bubble of Washington, D.C.

So, while I was shocked at the depths to which many Democrats & the media sunk, my greatest surprise was watching men & women who usually disappoint me stand up & do the right thing. I do not care to paint this as a red versus blue or Republican versus Democrat issue. After all, with Joe Manchin of West Virginia voting to confirm Kavanaugh, this was a more bipartisan vote than was the passage of Obamacare.

In my gut I've always felt Kavanaugh will not overturn Roe. I doubt John Roberts will either. I do think both of them will chip away at it, perhaps imposing nationwide restrictions if a challenge to Roe makes its way to the high court. The legal logic behind Roe is kind of absurd; it is ripe to be picked apart. Maybe we will discuss that at a later time. Anyway, Kavanaugh knows the hell he just went through was over abortion. He knows that. Maybe he'll take a hard turn to the right now, emboldened by those who stood by him during his trial. Maybe Clarence Thomas, with whom Kavanaugh now has much in common, will become his new best friend & Thomas will greatly influence Kavanaugh.

A lot of people deserve credit for wading through the muck of the last few weeks. I can't name all of them today. I do want to highlight two of them. Twenty-seven Senators have served continuously since 2005.

A comprehensive list of those who voted to confirm Roberts, Alito, Sotomayor, Kagan, & Gorsuch:

These two have absolutely shocked me (in the best way) these past few weeks.

Graham made several comments on the day Ford & Kavanaugh testified that have stuck with me. He told Kavanaugh to tell Sotomayor & Kagan (both Obama appointees to the Supreme Court) Hi. He said to tell them Hi, & he reminded the Democrats on the Judiciary Committee that he voted for Obama's nominees, & he stated he would never do to them what the Democrats did to Kavanaugh.

Graham is a politician through & through. He loves it. You can just tell. He reveres our institutions of government, & he especially reveres the body of which he has been a part for many years, the Senate. I think it gutted him to see his Senate colleagues behave the way some of them did. It flipped some switch inside of him. He respects the process. He voted for Obama's nominees despite many ideological disagreements with them because Obama won two elections fair & square, & the picks were Obama's to make. Graham is sad about the depths to which some in the Senate sunk, & he sees the political landscape in a way he never has before; this is my take after watching & listening to him these last few weeks.

I never, ever thought Lindsey Graham would do much more than irritate me. I certainly never thought Susan Collins would give a lengthy floor speech that was truly inspiring. She gave a riveting tribute to a basic foundational principle of Western civilization: the notion that a person is innocent until they are proven guilty. Collins is a moderate, pro-choice Republican. She won't ever be my favorite Senator, but her speech & her vote Saturday earned her my respect. She has faced threats of all sorts, as have most of these Senators. She is from Maine, not exactly a part of the Bible belt. She will continue to face backlash from her vote Saturday. She now has a target on her back & will face the disdain of the media; this is not a familiar position to her. Still, she clearly did her research, she laid it all out for the American public (those willing to listen honestly), & she voted Yes.

Throughout this whole ordeal, a few quotes were at the forefront of my mind, & you will pick up on a theme here:

Courage is grace under pressure.

Courage is not simply one of the virtues, but the form of every virtue at the testing point.

Finally, the lines from Scalia I've shared above, particularly the closing portion:

I live in Louisiana, as do many of you reading. I don't think we fully understand the pressure of living among those who deem themselves sophisticated, meaning the political classes as well as the media. They do not feel we are sophisticated. We are religious zealots who, to borrow the line, cling to our guns & our religion. I don't think we can fully understand the pressure on Susan Collins & some others to vote No. Her world, both in DC & back home in Maine, is ideologically considerably different from ours.

I haven't uploaded any pictures to share with you today. Perhaps next Monday I'll give you a pictorial rundown of our time in Florida. In the meantime, I hope you have a wonderful week. I haven't mentioned it, but yes, LSU's loss to Florida stung a little. That sting was greatly tempered by the fact that football seasons come & go, but Supreme Court appointments are for life. Maybe the Tigers will bounce back & beat Georgia. I am in a jolly mood & believe anything is possible.

May we all have the courage to do the right thing even when it means suffering the contempt of the sophisticated world. Goodness, I miss Antonin Scalia. Pray for my family's  safe travels home, & pray for our nation.