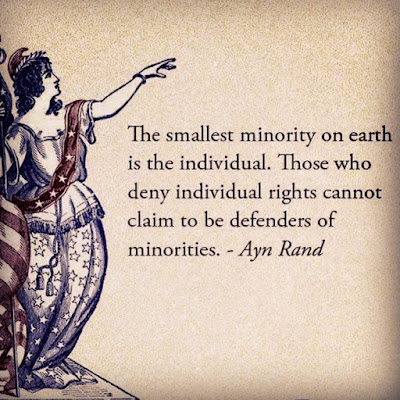 Well. I don't even know where to start. It is now October, & while that is always a reason to rejoice, there is a pall over the world this morning. Is that too dramatic? It's just where I am right now. With Anthony Kennedy's retirement over the summer, today, for the first time since 1981, the Supreme Court begins a new term without a Ronald Reagan appointee on the bench. I wish that were the most depressing Supreme-Court related news of the day.

Last week was a week of firsts for Reagan. Last Monday she came home from school with a letter from her teacher, a note to all second grade parents announcing the first class read of the year. Essentially on the parent-end of things this means the book is read & discussed in class, & we are responsible for making sure they know a handful of vocabulary terms. Sounds good to me. There was one other item of interest in the parent letter: a warning to parents that the class read mentions beer. Beer, the letter assured, is mentioned in a negative light.

Later that night I was explaining the beer situation to Trey & Reagan overheard our conversation, & so the three of us had a brief discussion about what beer is. At some point last week Trey told me Reagan asked him what divorce means. Apparently the book she was reading for AR  (that's Accelerated Reader) mentioned a character whose parents are divorced.

I can't even imagine not knowing what beer is or what divorce means. I am thankful to have my kids constantly under my nose reminding me that there is goodness & light & innocence in the world. I always worry about the world they'll inherit, & those worries have increased tremendously these last few weeks.

Saturday Reagan had her first soccer game. Trey & I really don't know enough about soccer to have any clue as to how well she did, but her team won & Trey took a lot of good pictures. 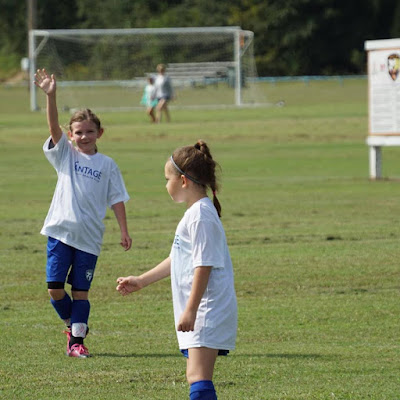 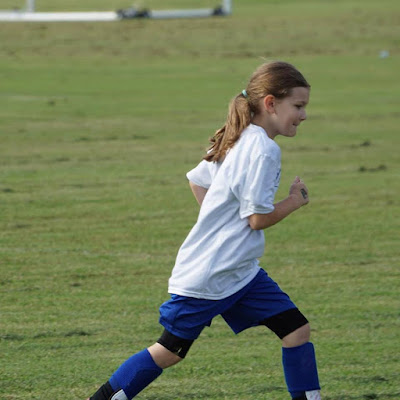 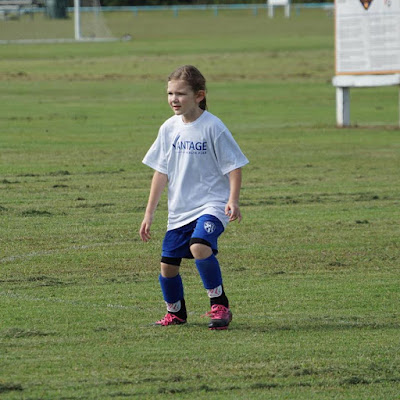 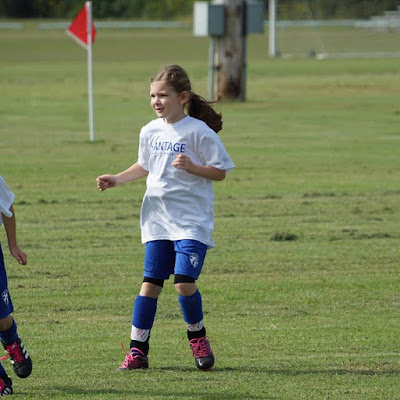 After the game we had a big family lunch with my parents & my sister's family at Cracker Barrel. I was so, so ready to go home & watch football & slip into a coma after lunch, but that is not what happened. The fair always comes to town this time of year, & unfortunately they set up camp at the local Civic Center. What this means is that we're constantly passing the fair with all its enticing lights & rides (we could avoid this if we moved across town, which is still very much a goal of mine). We pass the fair on the way to school, & we pass it on the way home from school. The kids have begged & begged to go to the fair, & so Trey & I took them to the fair for a few hours Saturday afternoon.

It was kind of awful. I mean, the kids had fun, but oh wow I just could not handle the people & the germs. There were a lot of people there, & I don't think it is out of bounds to say that some of them clearly are not making good life choices. Some real talk, ARK-LA-MISS:

(2) No one wants to see you wearing that.

Given current events it was a particularly inopportune time for me to be out among the public. I wanted to climb some stairs & scream at the crowds & ask them if they are aware that we are slipping into an Orwellian nightmare. Knowing that the odds anyone would know what Orwellian means were slim, I just plodded along behind the kids trying not to touch anything. I didn't scream at anyone, the kids had fun, & so far it seems none of us contracted any diseases, so overall a win, I guess.

I am in a dark place, people. Here's the thing. This whole Supreme Court mess is, for me, not about whether or not Brett Kavanaugh is confirmed because I simply adore his judicial philosophy & think he'd be the next Scalia on the court (I have doubts about this). Kavanaugh was far from my first choice to replace Anthony Kennedy. Eventually someone will fill Anthony Kennedy's seat on the Supreme Court. Odds are that individual will be named by Trump & confirmed by a Republican-held Senate. Maybe that happens this week, maybe it happens after mid-terms, maybe it happens in January when the new Senate convenes after mid-terms. Right now I believe the odds are good Republicans hold the Senate. I don't want Kavanaugh confirmed because his judicial philosophy is as exciting to me as, say, Gorsuch's judicial philosophy, but I do think it is important he is confirmed so as not to reward those who have so clearly attempted to destroy him in an effort to derail his nomination. From an ideological standpoint I would still prefer a Don Willett or an Amy Barrett to Kavanaugh, but Trump went with Kavanaugh, & despite last week's show trial nothing credible has emerged that should derail his confirmation. Speaking of Orwellian, we need to have a national discussion about what credible means.

What is at stake here is how we move forward, what we allow to become a normal, acceptable part of the judicial confirmation process. The spectacle of the last few weeks is the most debased, evil, blatantly partisan thing I have ever witnessed. It honestly breaks my heart. I cannot imagine what this man & his family have endured & continue to endure all because he is not as jazzed about killing babies as the rabid left thinks he should be.

Aside from the personal hell this is for him & his family, what is frightening & dangerous is the willingness of so many on the left & in the media to toss aside half the Bill of Rights in order to keep this man off the Supreme Court.

They pretend an accusation - - a less than credible accusation that every witness the accuser has named has refuted & that sex-crimes prosecutor Rachel Mitchell has expertly picked apart piece by piece in her report issued late last night - - is enough evidence to pronounce him guilty. They are so desperate to maintain the status quo regarding abortion in this nation that they do not care who or what they sacrifice.

If you think this has anything at all to do with "believing women" or truth & justice for victims of assault & it is not about abortion, you are either intellectually dishonest or a fool or maybe both. They fear he will restrict abortion rights, so it does not matter if he is guilty or innocent of the charges, & it does not matter if his reputation - - which was pristine both personally & professionally until he was nominated to the Supreme Court - - is destroyed. They do not care. They are evil. Believe Women is a useless slogan anyway. Some women lie. If you don't believe me, ask the Duke lacrosse team. Slogans are so often useless, thoughtless drivel because they lump people into categories when in reality the best, most effective way to operate in life is to treat people as individuals. Have we not learned this by now?

I did some reading last week, & a few things stood out & are worth sharing.

Saul Alinsky's Rules for Radicals, No. 13:


Pick the target, freeze it, personalize it, and polarize it. Cut off the support network and isolate the target from sympathy. Go after people and not institutions; people hurt faster than institutions.

And this, from Ayn Rand:

Collectivism holds that the individual has no rights, that his life and work belong to the group (to "society," to the tribe, the state, the nation) and that the group may sacrifice him at its own whim to its own interests.

He is the current sacrifice, his guilt declared before he even had a chance to speak on his behalf, but someone else will soon find themselves on the altar, in the middle of their own Soviet show trial. Consider that Feinstein opened last week by asking him if he'd ever participated in a gang rape (a claim that the FBI has now officially deemed not credible). Feinstein opened by asking Kavanaugh, a sitting Appellate Court Judge, on live television if he'd ever been involved in a gang rape, & then later she had the audacity to criticize his demeanor when he replied to her. He was too emotional. He was angry. Maybe he is not guilty of assault, but he is too angry to be a Supreme Court Justice. Let's prod him & poke him & accuse him of horrible things until he responds with anger & then claim his anger means he is unfit for the bench.

I suppose we have been through dark times before, America. I don't know how this will all play out. I do think confirming Kavanaugh is important not because he might possibly be the fifth vote in some significant cases that split 5-4 (because Trump could name another individual I'd be just as or more pleased with who'd be a pretty reliable fifth vote), but because any validation of these vicious tactics sets a dangerous precedent.

Whatever happens I feel like some permanent damage has been done. I thought maybe I was overreacting to things until I heard Lindsey Graham's impassioned speech last week. Graham is usually Mr. Bi-partisan-let's-all-be-friends-and-cooperate. If Graham thinks you've gone way too far, then you have gone way too far.

I know that Jesus is Lord & one day none of this partisan mess will matter (well, it may matter for some when they're held accountable for their actions of late). I know all this. I do believe Christians should pay attention to & pray for their elected officials. I believe Christians should care when evil rears its head in such a brazen way, & what I have seen over the last few weeks can only be described as unadulterated evil. We are now destroying men's lives, families, & reputation with clearly falsified claims in the name of abortion. Keep him off the court, whatever it takes. It is breathtakingly sad. I like to think many Americans can see right through this, but I also know many Americans are simply not paying any attention.

I hope the first week in October is a good one for you. I pray truth & principle rear their heads in the United States Senate this week.