Stepping Off the Page 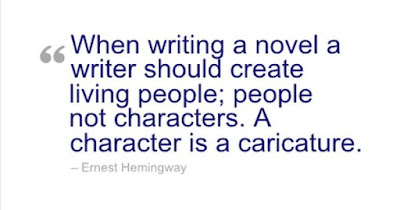 Since last I blogged, Dear Miss Moreau was published, September arrived, & college football is now officially underway. It was a good week.

Also, I'm at home today posting this while wearing my pajamas & sipping my coffee. I'm going to share a few observations regarding publishing a book, & then I'd like to conclude with some thoughts on the process of learning students.

First, because a lot of you have asked, if you want a copy of the book, it's on Amazon & Barnes & Noble. My plan is to add permanent links to both those sites on this blog once I remember how to do that using their recognizable logos. I believe what I need to do is add a widget for each & link them up. Sadly this task is at the bottom of my to-do list at the moment.

I realized a few things last week. By the time you publish a book, it is old news to you as the author. I was excited about the book years back when I was writing it. I wanted to talk about it then, but that proved difficult because it existed in my head. It slowly made its way to the page, but even once I had it down in black & white, few others had read any of it. This is just the nature of publishing. It's one reason you have to desperately love what you're writing; you're going to read it over & over & over again. You're going to hate it at times. You're going to know it backwards & forwards. You will wake up in the middle of the night, fire up your computer, & find a semicolon you know is located in a certain paragraph & decide instead of a semicolon you need to break the two sentences it joins into two grammatically distinct sentences that are fully separated by a period (not a hypothetical example).

You have to love what you write because it is possible it'll never be published. You have to want to tell the story that comes together in your head even if only for yourself. If you don't love it, finesse it, nurture it, your lack of care will be evident. I still love the story. It represents a writerly version of Anna circa 2013, but I still love it.

I like the people in my life. That's not a profound statement, but it's a thought I had more than once this past week. Thank you for being excited with me & for me. Writing & publishing a book for the first time is similar to the first time you have a baby. You have no idea what to expect. You've seen other people go through the process successfully, but you didn't pay a lot of attention to the details. When you grow & finally birth a baby, people are excited to get their hands on the finished product, but you want to talk about that time eight months ago when you threw-up the Wendy's you ate for lunch in the kitchen sink (not a hypothetical example). Thank you for your interest in my baby, or for feigning it for my sake. Either way, it means a lot to me.

My mom & my sister surprised me with a visit to school last Monday. My parents sent me roses & my sister brought me the cookie cake pictured below that says, Congratulations! You're published! Publication isn't official until a boatload of carbohydrates are involved.

While eating some of the cookie cake Monday night Trey was overcome with guilt because he didn't think to send me roses or carbohydrates, so all in all everything worked out to my advantage on publication day. 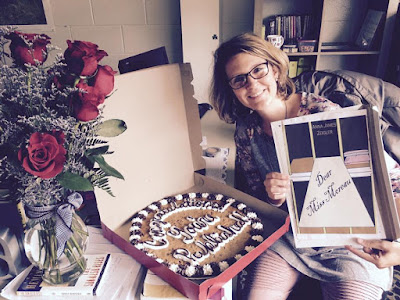 Reagan & I met Luke (a former student I've decided to keep) for dinner before heading to Friday night's football game. He brought his newly shipped book with him in hopes of my signature. 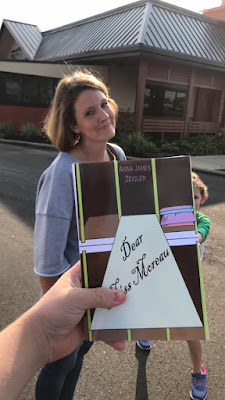 He even shared the event on his story (pictured below). If you don't know what that means, you must not have teenagers in your life. There are things I don't love about Snapchat, but I do secretly love that it has so forcefully integrated the word story into teens' vernacular. You know what we're discussing this week in Senior English? Narrative writing. You know what narrative writing is? Telling a story. People love stories, y'all. I also cover this in my public speaking classes, completing the circle of the humanities in which I live, breathe, & (usually) thrive. 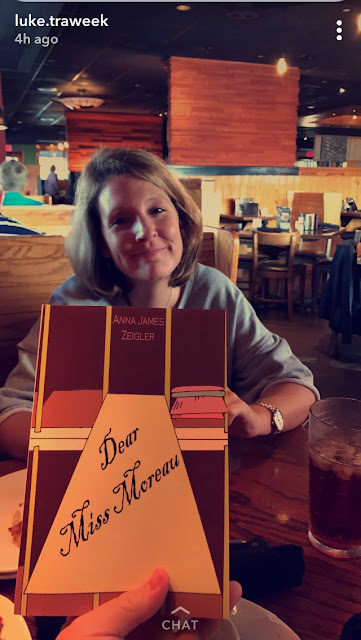 Moving on. I pulled the above quote from Hemingway not because I look for excuses to pull Hemingway quotes (I do), but because there's nothing else that could better illuminate what I want to conclude with today.

In addition to writing incredible prose, Hemingway shared some sound writing advice. The above quote is one such example. These words were in my head last week for two reasons. First, if you read my book (or any other book), understand that if an author's goal is to create living people you could imagine walking through your front door, these people absolutely must be flawed. Some of my favorite literary characters are deeply flawed. Sure, they can grow & realize their mistakes (*ahem* Lizzie & Mr. Darcy), but if they are perfect on page one & still perfect when you read The End, that's dull & unrealistic. So, for whatever they do that irritates, angers, or otherwise vexes you, please forgive my characters. They need flaws. I love them so much I initially wrote them with few flaws. Later I realized how problematic this was & had to rethink some of their decisions, their dialogue, etc.

The second reason this Hemingway quote was on my mind last week is because there are sixty-something new teenagers in my life. For many months these young people were caricatures to me. Please don't find that statement offensive; allow me to explain. People whispered things about them in my ear. I saw their names on a roster. Over the last two weeks, they have slowly become, well, real people to me.

As is the case with well-written fictional characters, they all have flaws. It's okay though because I too am deeply flawed. By the end of the school year, there will be no flaw unexposed in my classroom (my own included . . . because some days no amount of coffee is great enough to cover my sins). At the end of last year the mother of a young man for whom I'd cut out my kidney if he needed it told me she loved that I am real. I thought about that for quite some time. Real. What did she mean by that? I think, I think, she meant that I am deeply imperfect & don't pretend otherwise. With two small kids & a scary stream of essays flying in my face, I don't have much choice but to say to students, repeatedly, I am a tired, flawed human. I usually try my best but I'll have to beg for your patience & forgiveness more than once. In turn, they sometimes have to beg for mine.

It's fascinating to witness–to partake in–the process of someone becoming more than a name on a roster, a name you desperately want to associate with a face. A caricature is an exaggerated, incomplete version of someone. When all you know of a student (of a person) is via secondary sources, what you know is a caricature. We're moving past the caricature stage & I am happy about that.

We're moving past what I've come to think of this year as the Kings of England stage. The numerous Williams on my rosters are now people to me, people named Billy & Reece. There's a George in my room first & fifth hour, but I don't teach anyone named George; I teach Tyler. We're moving from formal names on rosters & caricatures of students to real, living people, & that makes it so much easier to walk in my room in the morning. We're past the first date awkwardness. Admittedly in a classroom setting the second & third dates are mandatory whether you're interested or not, & that's where the mutual begging for patience & forgiveness sometimes comes into play. Also necessary are coffee & this year's theme at school: grace.

I hope you're as happy as I am that it's September. I am not hosting any formal book-signing event because of the demands on my time, & also because such an event would make me want to vomit a little. I will sign your book if you ask; if I like you a lot I'll even meet you at Outback to do so.

May today be slow & relaxing, & may this week be covered in coffee & grace as we all return to work & school.