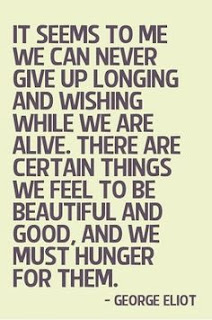 Let me begin by saying we're in Jackson today for our quarterly visit with Reagan's endocrinologist. To any students reading, Hi! I hope you had a wonderful weekend, I of course miss you, & I hope you're behaving. I'd love nothing more than to walk in tomorrow morning & discover a note gushing over your behavior from the substitute. See what you can do about that. Also, as I discussed last week, unless you're one of the eight juniors I teach, YOU HAVE A NARRATIVE ESSAY DUE FRIDAY. 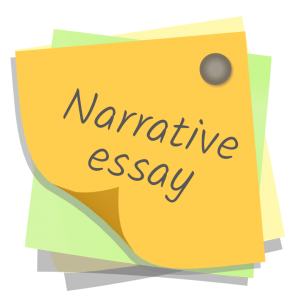 With all that said, I'd like to talk for a moment about my morning routine. Hang with me here. Every weekday morning around six twenty, I make two sandwiches. Have you ever made sandwiches at six twenty in the morning? Ten sandwiches a week at that time of day is certainly an effective form of birth control. As I stand there, smearing the bread with peanut butter, I often think, "What if, instead of ten sandwiches a week, I made fifteen?" Then I shudder a little, put the freshly made sandwiches in the lunch boxes, take a few sips of coffee, & go wake up the kids.

It's been a month since school began, since the sandwich ritual, & thus my sandwich-ritual-woe, commenced. It's funny to me how hung up I quickly became on the sandwiches considering what unfolds in the hours after the sandwiches are made. Discuss a novel whose narrator is impotent with fifteen teenagers? Sure, sure I can do that. Educate yourself about 1,000 years of British history so you can impress upon teenagers the gravity of the obstacles the British had to overcome in order to emerge as a unified, powerful nation whose brightest lights churned out some of the world's best literature? No biggie! Sign me up! Just please, not the sandwiches!

Oddly enough, about the time the sandwich-making-plague descended, I was (& continue to be) met at every turn with reminders about hunger. Funny how that works. September is Hunger Awareness Month. I know; I didn't know either until someone from the local Food Bank came & spoke to the high school students.

This month's book club book (yes, I am still in the book club . . . hanging on by a thread at times, but still reading the books & attending the meetings, albeit looking a bit haggard) anyway . . . This month's book is The Glass Castle by Jeannette Walls. A work of nonfiction, the book chronicles the author's nomadic childhood. Led by their flighty, irresponsible parents, Jeannette & her siblings are constantly on the move (their parents often evading creditors), frequently living in squalid conditions, & no strangers to hunger. The book spent considerable time on the New York Times best seller list, so it's possible you might've read it or heard of it.

I haven't finished the book yet. For various reasons, I can't seem to read too much of it at once. For one, it's not a mood-lifter (unless you consider that it leaves me feeling like the best mom in the world). Also, there's the whole teaching English thing that's taking up considerable chunks of my time at the moment. Thirdly, it's not fiction, & you know how I love my fiction. Thankfully the teaching English gig requires the reading of some fiction, so I am finding the balance for which I always strive.

I will hesitantly say I recommend the book. I hesitate because I haven't finished it yet (we're meeting in a week), & because Jeannette's father has a colorful vocabulary. You know me; you know I will read, or at least make a valiant attempt to read, basically anything, but there are some for whom page after page of a drunk man cursing is where they draw the line, so fair warning. I do think it's a worthwhile read because it makes you think. It makes you think, & it makes you lower your head in shame for whining because you have two healthy kids & a houseful of food. You have the privilege of waking early to make two lunches, never once worrying if there will be food in the pantry with which to fill the lunch boxes. You have the privilege of loading the kids & their lunches in the car, driving them to school, laughing & singing all the way. My sandwich whining has been effectively curtailed.

I suppose it's incorrect to say I've never been hungry. I have been hungry; we all have. It's one of the many reasons we all cried as infants. Hunger is, as Maslow knew, baseline humanity, & most of us have reached a point, not of starvation, but of gnawing hunger, hunger that blurs your thought processes & often negatively affects your behavior. Filling a stomach that hungry is glorious. To quote Frank McCourt, "After a full belly, all is poetry."

I believe I've mentioned before how much I adore The Hunger Games series. Collins does such a superb job of conveying Katniss's needs, her desperation. In her life prior to the opening of the first novel, Katniss's dominant need, & the dominant need of her mother & sister, has been hunger. Fending off starvation has been what's driven her; she has become such an expert at beating back death she survives not one, but two Hunger Games.

In Catching Fire, when Katniss (& the dense reader who hasn't yet picked up on it prior to this) begins to realize how she feels about Peeta, she has this thought:

I thought I was something of an expert on hunger, but this is a new kind.

The first time I read that, I was racing through Catching Fire, naturally, but I paused & reread that sentence thinking, Oh. Oh I see what you did there, Ms. Collins.

One of the (many) things I love about Katniss & Peeta's relationship is that they each give the other something crucial, at least when you view their relationship in light of Maslow's hierarchy (& who doesn't?). Due to her father's death, Katniss is, from a young age, forced to hunt & scrape together whatever food she can for her mother & sister. At a pivotal moment in her young life, Peeta gives her bread, & does so risking his own safety, thereby feeding her, but also sending a message that he thinks she is worth the risk.


I just adore that Peeta's father is the baker in District Twelve, given that Katniss's existence is dominated by hunger, or staving it off. During my first read, there were some dark moments when I thought Collins was going to stick Katniss with Gale in the end (shudder), but what kept my hopes alive is the way Collins weaves Katniss's hunger throughout the series. Her hunger for bread, yes, but also a hunger for a life in those higher tiers of Maslow's hierarchy, where the belly is full & dread is allayed &, as McCourt said, " . . . all is poetry," & life, no longer consumed by hunger & thirst & fear, is something more than a twisted game, the object of which is simply to survive.

Years after he tosses her bread, Katniss becomes for Peeta what his own mother never was, a woman who loves & accepts him, flaws & all. Sigh. They both spend their formative years wrestling with demons, &, bereft of functional adults who can give them the love, acceptance, & even the food necessary to grow & thrive, they claw their way to the top of the hierarchy anyway, finding what they need in each other.

I likely won't ever have the chance, but I'd love to ask Suzanne Collins if she had a picture of the classic triangle of Maslow's hierarchy in her sightline as she wrote the books . . . maybe with paper cutout dolls of Katniss & Peeta helping each other climb to the top? Maybe? I bet she did.

Why is it, do you suppose, that hunger & thirst are so often used to describe various other yearnings, be it Katniss's hunger for Peeta, or the Biblical directive to hunger & thirst for righteousness, or Christ's words regarding the bread of life? In the above quote, Ms. Eliot asserts that, ". . . there are certain things we feel to be beautiful and good, and we must hunger for them." There is nothing more universal, no reference that would be quite as effective, as hunger. Everyone knows what it means to be hungry, but most of us have the means to quickly stifle that awful gnawing.

It is uncomfortable for me to think about hungry people, hungry children. It grieves my soul. They're out there, though, & I am so motivated by the students at school who regularly visit the Food Bank, & by the detailed account of Ms. Walls's childhood I am reading, that I am going to do more than sit on my rear & write this blog. I am going to actively find out what I can do to put food in a child's mouth, ever cognizant of how blessed I am to make ten sandwiches a week to feed my own children. Admittedly what I can do at this moment is likely write a check. I don't have a lot of free time on my hands, but I can write a check, or drop cans of food by the Food Bank, & that is more than I've ever considered doing in the past.

Making two sandwiches at six twenty in the morning may not be my favorite line in the poem, but it is indeed another line in the long, glorious poem that is my life. For me, all is poetry; through early mornings & diabetes & pink eye & exhaustion, all is poetry.

Because I've not posted any pics for a couple of weeks, here they are this past week on school picture day, perhaps less than thrilled to be dressed so fancily for school: 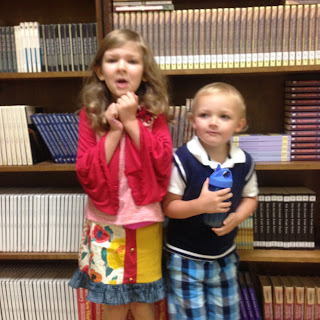 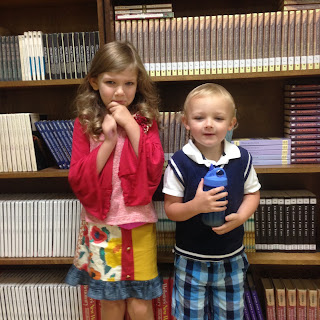 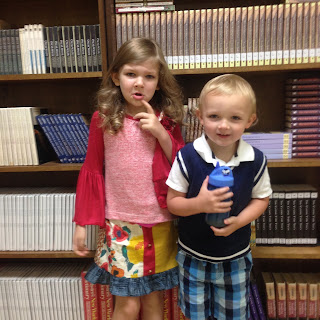 We'll chat next week, likely about the endocrinologist's report & perhaps a word or two about my Papaw, who will, the Lord willing, turn ninety on Wednesday.

Email ThisBlogThis!Share to TwitterShare to FacebookShare to Pinterest
Labels: The Hunger Games