And he writhed inside
at what seemed the cruelty
and unfairness of the demand.
He had not yet learned that if you do one good deed
your reward is usually to do
another and harder and better one.

I don't want to talk about it.

Whatever it is you're expecting me to rail about, I don't want to talk about it.

No words will be wasted discussing the ominous clouds that gathered over the state of Louisiana on Saturday.

Just as soon as I say this. First, I still love you, Tigers. Forever LSU. I know there is a chorus chanting for Miles to go, but you know, I love him. I love Les Miles. Is he a genius? No, no he is not. One day he won't be the Tigers' coach, & when that day comes, I will be sad. I will miss seeing him on the sidelines, & hearing him deliver awkward & nonsensical lines in press conferences & interviews. I hope he's still on the sidelines next year. He's presided over the winningest streak in LSU football history, & he's assembled a top recruiting class that would certainly be in jeopardy if he's fired. I say fired when what I mean is bought out at a considerable price tag. Changes need to be made, obviously, but if you oust Miles, to whom do you turn? I've yet to hear a name that screams, "Yes! This man can survive the SEC West undefeated!" So, while no one is asking my opinion, there it is. I don't want to see Miles go.


Second, shame on you, Louisiana. Shame on you for handing the governorship over to Democrat John Bel Edwards because you don't personally like David Vitter. I don't personally like Vitter either, but I wasn't voting for my new best friend or next door neighbor. We were all voting for someone who's going to sit in Baton Rouge & oversee policy decisions that'll affect our lives, & the livelihood of business owners in this state, & David Vitter is better suited to do that job than John Bel Edwards, a man whose name suggests he could easily have just stepped off the set of Dallas, to mention nothing of the Cliff Barnes vibe I get from him.

We are a red state, y'all, but we just gave the DNC a whiff of hope & they are going to be descending on us. They want Vitter's Senate seat. For years they held a Louisiana Senate seat (Landrieu's), & Edwards' election is a ray of hope that's going to bring in their people & their money. After years of their meddling, we'd finally tacked a No Democrats Allowed! sign on our bedroom door, only to rip it down.

It's frustrating to me that it came down to Vitter & Edwards. I don't think there's great love for Edwards across the Bayou State; the election was a referendum on David Vitter, who obviously overstayed his welcome as a Louisiana politician. The other statewide races, Lieutenant Governor & Attorney General, were handily won by the Republican candidates. To quote Meat Loaf, I guess two out of three ain't bad.


Believe it or not, Saturday's disappointments aside, there is a great deal raising my spirits on this chilly Monday. Ohio State lost, so there's that. Also, it's chilly. Yesterday's high was fifty! It took me ten minutes to decide which of my many beautiful (but heat trapping) sweaters to wear to church. There's a whole section of my closet filled with sweaters I love, but that are so heavy I can only wear them in arctic conditions. Just so you know, a low of thirty & high of fifty = arctic conditions in Louisiana. If I can load & buckle the kids in the car without breaking a sweat = arctic conditions.

These days leading up to Thanksgiving are some of my favorites of the year, & not just because Reagan & I are both out of school & we can sleep late, wear pajamas all day, & shower infrequently. 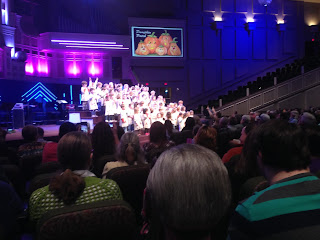 Close-ups of the T-shirt she made (with supervised help) for the occasion. 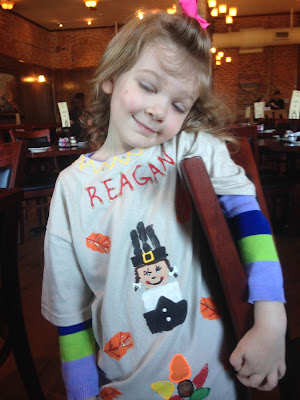 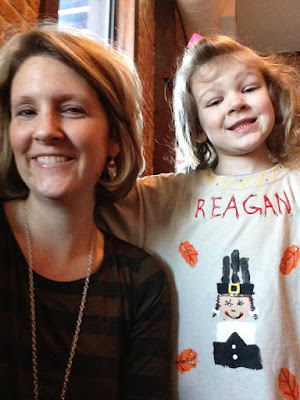 As soon as the kids & I were home from the program, the weight of the holidays began to settle on my shoulders. As I type, I have two major tasks ahead of me:

(1) I have about sixty speeches I must grade over the weeklong break. Since Thursday, when my break officially began, I've put grades on approximately six of them, but admittedly that grade was, in each case, a zero. I've yet to tackle the task of grading the speeches students actually delivered.

(2) I have to decorate the house for Christmas. I mean, I don't have to, but Reagan & I will both hate me if I don't. Trey & Henry can take it or leave it.

No progress was made on either the grading or the decorating front on Friday. Realizing the lows on Sunday would be in the thirties, I knew what I had to do.

I recently gave Jessica a load of Reagan's old clothes for Maisie, including all her heavy winter coats that no longer fit her. This left her with a few jean jackets & a GAP hoodie, & so I took both kids to Target on Friday in order to get Reagan a coat.

Overall, the outing went well. I bought two bags of popcorn to ensure that things would go fairly smoothly. 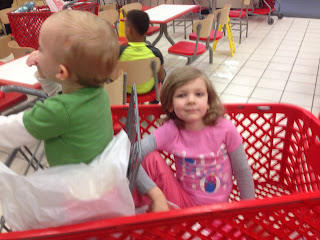 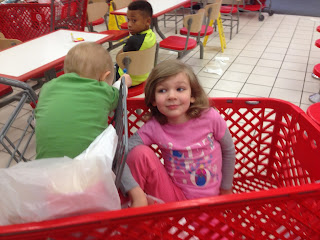 I do believe the last time I was in Target with both kids, Reagan was two & a half & Henry was three months old. They've gained a lot of collective weight since then. I definitely got my cardio in on Friday. 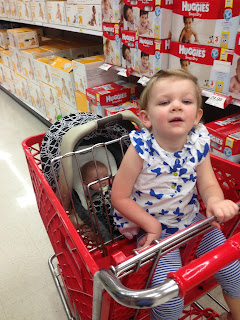 Before we perused the coats, I wandered up & down the hair product aisles, marveling at a few things & mentally bookmarking them for possible future purchase. I was intrigued by this John Frieda shampoo that promises Frizz-Immunity. I don't think I've ever before seen a guarantee of immunity on a bottle of shampoo. That's a serious hair promise to make a girl who lives in Louisiana. 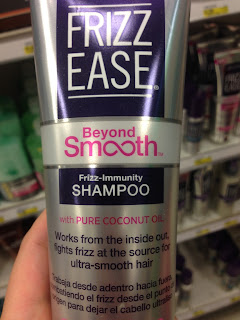 After I was done piddling around, Reagan selected a leopard-print coat based largely on her fondness for these leopard-print earmuffs displayed with the coat. 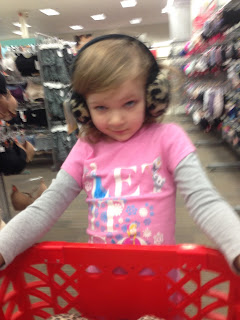 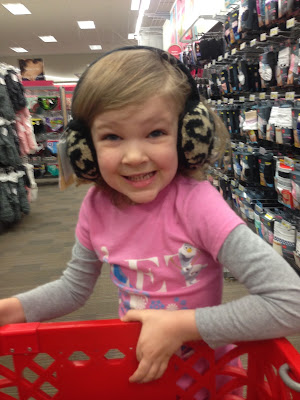 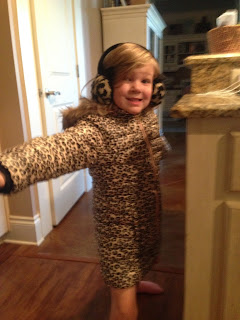 I didn't get any grading done Friday night because as soon as Trey arrived home, I left the house to be alone with the Adele CD I bought at Target. The woman's voice pulls emotions from you you didn't even know were possible. You think you're a happily married woman driving around in her sweatpants listening to her new CD, & the next thing you know, your mind's drifting to the guy who sat behind you in seventh grade math class. He would always share his pencils, & then one day when you dropped your notebook & papers flew everywhere he helped you pick it all up, & why did you throw it all away?! Why?! Where is he now?!

No grading (or decorating) was done Saturday either. After they accompanied me to vote, the kids & I spent the day at my parents' house. I exercised & then watched the Tigers fall completely apart while the kids destroyed my parents' house with their trusty sidekick cousin Maisie.

We returned home Saturday night to an entryway full of plastic tubs that Trey drug down from the attic in our absence. He knows, you see. He knows that I won't sleep well until the tubs are unpacked, the tree is up, & the Christmas decorations are displayed (& the empty tubs are packed neatly away).

I have goals, you see. I have visions. Ideally, by today's end, the house would be fully decorated for Christmas, the storage tubs stacked neatly in the outdoor storeroom, &, with the kids nestled in their beds, I'd sit on the couch & grade speeches while basking in the glow from my Christmas tree & sipping hot chocolate. If I grade twenty speeches a night, I can wake up Thursday morning, all the grading behind me, & spend the day overeating, watching football, & trolling the Internet for sales.

I am skeptical that my vision will become a reality. I've had kids too long, & been teaching & grading too long, to think otherwise. It is indeed a wonderful feeling to finish something, to put a grade on the last speech, to put the last ornament on the tree, to fold the last T-shirt. I'll never tire of reveling in the feeling of completion, but I've lived long enough now to know that there will always be another item on the to-do list. The moment you sit to bask in the glow of the tree you spent hours decorating, someone will want something drink. Or someone will need their blood sugar checked. Or someone will poop.

I have no more illusions about having everything done, particularly this time of year, when grades are due soon, & seemingly everyone I love has a birthday in December, & people expect decorations & merriment & presents & general holiday cheer . . . on top of the usual stuff they expect, like food & clean laundry. There's a lot ahead of me, a lot expected of me in the next month, & let me tell you, if I think too much about it, my breathing gets a little erratic.

The above Lewis quote is essentially a paraphrase of Luke 12:48, ". . . For everyone to whom much is given, from him much will be required; and to whom much has been committed, of him they will ask the more." The reward for one good deed is another & harder & better one. All the things  weighing on my mind, the things I want to check off the list so I can sit & read & relax (& waste time on Nordstrom's site) are immense blessings. Blessings rarely come without responsibility.

Houses & kids & jobs are stressful. I still prefer life with them, & so I accept the responsibilities that come with them, even though that means sitting on the couch, basking in the glow from my tree without a care in the world is seldom, if ever, going to happen.

Handle your responsibilities with care & don't always relegate them to a dreaded to-do list. Thank the Lord for them, & watch out, because He's likely to send more your way.

I'd be remiss if I signed off without letting you know that, regardless of how many speeches have been graded or how festive & merry my home is, tomorrow night, Lord willing, I am meeting some of my favorite people to go see the grand cinematic finale of The Hunger Games series.

In March of 2012, I attended my first book club meeting. We saw The Hunger Games & then dined at Chili's to discuss the film & the superiority of the book to said film. Needless to say, for many reasons, I'm taking some kleenexes with me tomorrow night. It's a recipe for an emotional evening. I wonder if Adele sings a song about middle-aged women who're ridiculously attached to their book club.

My plate is full on this cold Monday morning, but so too is my heart.

I pray you all have a Happy Thanksgiving. Much love from me & my family to you & yours.