And now I may dismiss my heroine to the sleepless couch,
which is the true heroine's portion -
to a pillow strewd with thorns and wet with tears.


The possibilities are endless today.

Do I address the Starbucks red cup fiasco?

All the stuff I've ordered online the past week?

The Democratic debate that was held Saturday night?

The atrocities that unfolded in Paris over the weekend?

The annual implosion of the LSU football team in the month of November?

All my Razorback friends who're currently on my 'Unfollow' list on Facebook?
(kidding, kidding . . . I typically only Unfollow over recurrent foul language, offensive pictures, &/or excessive cat-related posts)

For various reasons, I really don't want to talk about any of the above; you can thank me later. Let's mix it up a little & talk about goings on around here, & what I am reading. I mean that's something new, right?


My relationship with my speech students has really deteriorated over the past couple of weeks. We've reached the point in the semester where they're doing most of the talking while I sit in the back of the room & pretend to listen.

Last Tuesday morning, I delivered an impromptu speech about how deeply I loathe the assumption that my time is not valuable, that I have ample free time during which I'd love nothing more than to listen to students deliver speeches they were unprepared to deliver on the assigned date. 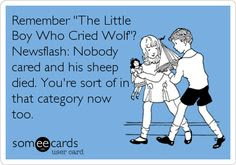 Included in my impassioned speech may've been a synopsis of the story "The Boy Who Cried Wolf." One day, my students' aunt or grandparent might actually be hospitalized, or even die; one day, they might truly be vomiting, but when that day comes, I am not going to believe a word they say because they lie to my face in thinly veiled attempts to salvage their lazy, procrastinating rear ends.

By far the best part of last week classroom-wise was that I wore a turtleneck on Thursday, my first of the season. I don't know if I looked intimidating in the turtleneck, or if I truly struck fear in their hearts with my speech on Tuesday, but everyone was clicking on all cylinders in class on Thursday. No vomiting, no hospitalizations, nothing! I had six students slated to speak in both of my classes, & I heard twelve speeches. We shall see if the streak continues tomorrow, though the forecasted rain is usually predictive of my penciling in several big red marks that = ABSENT.

Between classroom stress & the news (& blood sugars & diapers & an incontinent dog), you understand why I seek the escapes I do: online shopping (many thanks to those who complimented my new sweater yesterday; it's from Macy's), hot chocolate (& various other forms of chocolate), hiding in my closet, drinking coffee alone while everyone sleeps, drinking coffee at other times, writing, & of course, reading.

Right now I have one foot in the second half of Mockingjay (so the sadness & death & Peeta-goodness will be fresh on my mind when I see the film), & the other foot in Jane Eyre (whatever, you know what I mean). These books don't have a great deal in common, but I didn't walk away with my English degree without learning how to find commonalities in literature where none seem to exist.

Both Katniss & Jane are small in stature, poor, born into a rigid caste system, & orphaned for all practical purposes. Jane's parents are both dead, & Katniss lost her father to death, & her mother to depression. Both women compensate for their small stature with (a sometimes acerbic) wit & a feisty determination. Both travel lengthy & twisting character arcs that first and foremost trace the heroine's journey of self-discovery. Both return to a love they thought they'd lost. And oh, the journey back is just the best.

"I am no bird; and no net ensnares me; I am a free human being, with an independent will; which I now exert to leave you."

(7) "I can live alone, if self-respect, and circumstances require me to do so. I need not sell my soul to buy bliss."

(8) I could not unlove him now, merely because I had found that he ceased to notice me.

I don't disagree with Lewis. It's no doubt a difficult balance for a writer to strike. I've had some fiery discussions over the years (both in & out of the classroom) with people whose assessment of a novel's heroine was the opposite of mine.

What Lewis doesn't say is that, as is often the case in life, sometimes the riskiest ventures, if executed well, pay the biggest dividends. I believe that is certainly the case with Jane Eyre. I read this Lewis quote several months ago & immediately thought of Ms. Bronte's heroine, so oft described using her own words, "poor, obscure, plain, & little."

The first time I read The Hunger Games series, I thought of Jane when reading initial descriptions of Katniss. While Jennifer Lawrence is an excellent on-screen Katniss, she's not the tiny wisp of a girl Collins introduces readers to in the opening novel of the series. I thoroughly enjoy both of their stories, & there are overlapping lessons worth noting in the novels. So, Reagan, when you're reading this in, oh, ten years, *now* is when you sit up & pay attention.

Spend time alone; most heroines I've read crave it. Find something you love to do alone, be it read or write or even hunt.

Understand that it's okay to cry, to wallow in the misery, but you cannot remain permanently in a state of despondency. Pick yourself up. As Katniss says in Catching Fire, "The sun persists in rising, so I make myself stand." Notice the pronouns: I make myself stand.


One of the assigned novels I read in my British literature class in college was Virginia Woolf's Mrs. Dalloway. I'll never forget our professor discussing the novel's opening line at length (in fact, because of her lecture on the matter, I can cite the opening line from memory): Mrs. Dalloway said she would buy the flowers herself. The gist of the opening line lecture was that the line sets the tone for the entire novel. The reader knows from that one sentence that Mrs. Dalloway is a married woman, & she is an active agent, making decisions & getting things done, rather than waiting, rather than being acted upon.

Attractive heroines (& attractive women) know themselves. Often readers become enamored with them as we travel their journey toward self-knowledge alongside them; we cry with them, laugh with them, are repulsed with them, fall in love with them, walk away from love with them, &, sometimes, return to a love we thought we'd lost.

Attractive heroines do not need a gaggle of friends (or men) to entertain them, or validate their self-worth, or prod them to dry their eyes, get off the couch, & get moving. The heroine's journey is never an easy one, but it's always better to be the heroine, the agent of change, than a one-dimensional supporting character.


Wallow on the couch when the need arises. Cry. Lament over lost loves & missed opportunities. Weep for the injustices in the world. None of that makes you weak, or disqualifies one from heroine status. When Jane Austen's Elinor Dashwood finally breaks down & cries is when I love her most; she is impenetrable throughout most of the novel, to the point of it being irksome to me. What we admire about Elinor & Jane Eyre & Katniss is that they get off the couch, dry their eyes, & face the future.

So that's today's lesson, folks. Sometimes I just can't go on, can't do one more load of laundry or change one more diaper or grade one more speech or read one more depressing news article until I figure out exactly what it is about Jane Eyre I see echoed in Mockingjay. I mean hey, we've all been there.

Obviously I've retreated from reality & have been reading a good bit. I don't even have any pictures of the kids to post, though that's largely due to a storage issue on my phone that'll obviously have to be addressed before Reagan's WEE School Thanksgiving program coming up on Thursday.

I feel that we're on a precipice, about to descend into the bustle of the holidays. Reagan asks me almost daily if it is Christmas Day yet. Reagan & I both have all next week off from school; we're planning to ship Henry off with a grandmother so we can spend a day decorating our house for Christmas. My sister & co. will be arriving in town within the week. Soon I'll find myself seated in a theater (surrounded by women who accept me & understand why I am bawling like a baby) watching as the final film installment in Katniss's saga unfolds.


It all makes my heart swell, while simultaneously has me drifting toward the couch, which, as we've discussed, is perfectly acceptable so long as I eventually summon the strength to get up & defeat the Capitol feed the kids.