If you can't explain it to a six year old,
you don't understand it yourself.


August began with considerable fanfare for us.  I was out of the bed by six o'clock in the morning Saturday, & by eight, the kids & I were belted in the car in our matching neon green VBS T-shirts & headed to the Chick-fil-A drive thru.  You don't drag Reagan out of the bed that early without chicken biscuit negotiations. 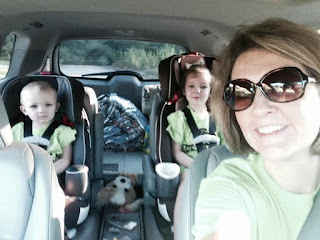 After registering the kids & bidding them farewell, I headed to my assigned classroom, which some friends & I transformed into a historical replica of the home of Ruth & Boaz.

It's common knowledge that Chevron patterned ribbon was Ruth's choice for her wreaths. 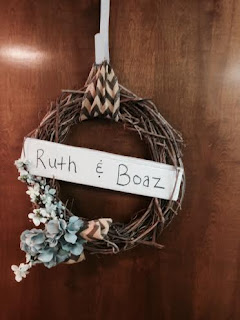 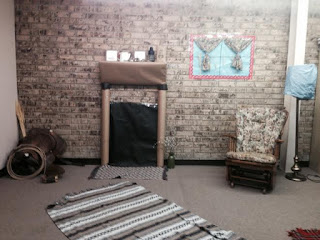 Below, Boaz's fields where Ruth gleaned & snagged herself a second husband.  You don't score your own book in the Bible without being a determined multi-tasker. 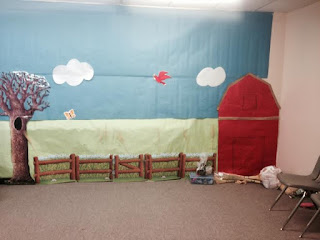 (If you're assuming that I had Sting's "Fields of Gold" in my head all day Saturday as I sat through the story of Ruth not once, not twice, but five times, you assume correctly.  I mean if Ruth & Boaz had a song, that would be their song.)

This year's VBS theme was "Wanted by God."  Let me back up to last year's VBS theme, "Jesus is My Superhero."  Henry was too young for VBS last summer, but Miss Reagan attended. 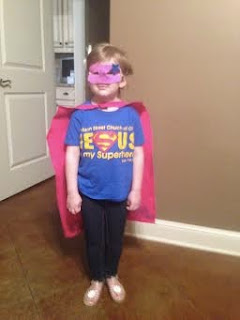 I hesitate to call your attention to this, as I didn't teach or really participate in VBS at all last year, but I blogged it here, if you missed it.  Last year, on the first Saturday of August, I dropped Reagan off at the church & went to IHOP & then the mall.  And hey, you know, even Jesus needed time to Himself when He was on earth.

Last year's VBS coincided with the beginning of my crush on Dr. Kent Brantly, the American doctor whose selflessness continues to make me feel pretty pathetic.  The blog I linked a few sentences back, as well as this one, were written at the height of my Brantly mania.

It is not altogether inappropriate that I mention Dr. Brantly (though of course it would not stop me if it were), as he'd fit right in with the line-up of Biblical figures highlighted at Saturday's VBS, all individuals wanted by God for their various Christ-like attributes.  Do you see what we did there?

So here's Reagan & Henry in their Yee-Haw, we-are-wanted-by-God Western wear: 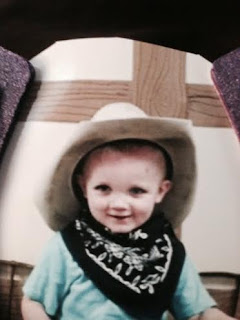 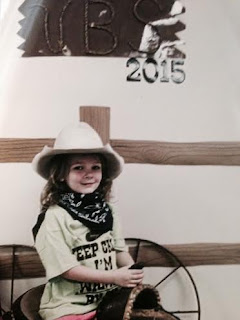 The only thing I've read lately that doesn't prominently feature Harry Potter is the book of Ruth.  I admit I didn't sit & read Ruth of my own volition.  I was asked to compose a script featuring Naomi, Ruth, & Boaz relaying Ruth's story to be used during VBS, otherwise I freely admit I'd have never left Hogwarts.

I sat down to begin scripting Ruth's story & quickly realized that it begins with Naomi.  One of my favorite things about reading is uncovering the layers of a protagonist's backstory & watching a masterful author weave the past with the present to pave the way for glorious happenings in the future.  When the Holy Spirit gets involved in this process, the result is a flawless, fascinating read.

I remembered the basics of Ruth; she loses her husband & father-in-law & feels such loyalty to Naomi, her mother-in-law, that she leaves her home in Moab & returns to Bethlehem with Naomi.  They are both widows, and find themselves in a precarious situation upon their return to Bethlehem.  So, good for Ruth, right?  That's great that she's so loyal.  High-five, Ruth.

When I was younger, I saw the Bible as a series of short stories, a short story collection, if you will.  This is how we approach the Bible when we teach children.  Noah built a boat for the animals.  Joshua marched around Jericho & the walls came tumbling down.  Ruth was loyal to her mother-in-law.  David defeated Goliath.

At some point, we have to begin weaving the threads together, in our Sunday school classes, & for ourselves.  The individual stories are part of a larger tapestry that, quite literally, tells the greatest story ever told.  Ruth's significance to the story can only be fully appreciated when you move beyond the tropes children can recite.


Ruth was loyal to Naomi, that is certainly correct.  Do you know what happened next?  She met & married Boaz, & had his son, a boy named Obed, who grew up & had a son named Jesse, who had a son named David, who became the King of Israel, & through whose lineage Jesus Christ became flesh, a babe in a manager.  God showed Ruth His favor not only by blessing her with a second husband & a son named Obed; God's favor for Ruth outlasted Ruth herself.

I was desperate to take the script to the next level, to go beyond, "Be loyal like Ruth."  There's so much more to her story.  Ruth's loyalty led her to Boaz, who is referred to as her redeemer, a man who stood up for her & saved her from destitution in a strange land; it's an excellent parallel to the saving grace Christ, our redeemer, offers us, the very Christ, mind you, who was a direct descendant of Ruth & Boaz.  Suddenly Ruth's decision to leave her home in Moab, likely the only place she'd ever known, & return to Naomi's hometown, Bethlehem, takes on considerably more significance.

I fretted a bit over how much of Ruth's story to reveal, & what language would be appropriate for young kids.  You want them to take something significant away, but not have nightmares.  Parts of Ruth's story are depressing; Naomi's husband & her two sons die, & then Ruth & Naomi are alone in a precarious situation.  Before the story began, there was a short list of "new words" we read for the kids so they'd be listening for them during the story.  By "new words" I of course mean vocabulary words, but tried not to phrase it that way because VBS is supposed to be thrilling, & thrilling & vocabulary are not quite synonyms.  Some of the words on the list were widow, destitute, & famine.  Peppy, right?

I hope the kids took something valuable away from their time in Ruth & Boaz's abode on Saturday.  No one liked my idea of having them write an essay on the parallels between Boaz as Ruth & Naomi's redeemer & Christ as our redeemer, but still, I hope we added a few seeds to their silo (you see what I did there?) for later development.  It's not shown in the picture above, but we thoroughly sullied the floor of the classroom with grain (the kind grown at Hobby Lobby) for the kids to glean.

I can tell you from my VBS clean-up experience that gleaning is hard work.  I salute you, Ruth.

Here's what I take away from my recent time with Ruth.  First, kids, don't assume the world began spinning the day you were born.  Significant pieces of Ruth's puzzle were assembled before she ever met her first husband, Naomi's son, or the mother-in-law to whom she was so famously loyal.

Second, God is always at work, & He can certainly use devastation for His purposes.  Consider the events that led to the birth of Obed, the grandfather to King David, through whose direct line Christ was born.  Famine drove Naomi & her family from their home in Bethlehem.  Naomi gained two daughters-in-law, only to lose two sons & her husband.  Ruth, desperate to feed herself & Naomi, shelved her pride & did what it took to find food, prostrating herself before Boaz, who in turn showed her kindness.

Third, Ruth is a blueprint for the gospel.  You may've heard it said that you can teach the gospel with the book of Isaiah; the same can be said of Ruth.  Paul could've been speaking to Ruth when he wrote, "there is neither Jew nor Greek," as she knew what it was to be an outsider seeking acceptance.  She wasn't an Israelite, she was destitute in a foreign land, & she needed someone to redeem her.  The law was designed to pave the way for Christ, & it's no coincidence that under the Law of Moses, a kinsman redeemer, or nearest kinsman, is a Goel, meaning to redeem, receive, or buy back.  I've done enough reading to know that when the pen is in capable hands, there are no coincidences.

Finally, the book of Ruth, coupled with the entirety of the lineage of Jesus, is a testament to God's inclusivity.  Ruth was a descendent of Abraham's nephew, Lot, which means she was a Gentile.  She was not an Israelite, one of God's chosen people while the law was in effect, yet she chose to return & live among them with Naomi.  It gets better.  Boaz's mother was Rahab, the Canaanite prostitute who hid the spies before the fall of Jericho.  Ruth & Boaz's great-grandson, David, is known for many things, one of which is his adulterous affair with Bathsheba.

If these are the people through whom God chose to bring His son to earth, if these are the people whose blood flowed through Christ's veins, sustaining him while in the flesh, & then leaving his broken body in rivulets as He hung on the cross, do we need any further proof of God's desire for all to be His, or of His willingness to forgive sin?

Certainly there were no perfect individuals through whom Jesus could have traced his lineage, as that would've negated the need for His sacrifice, but God could've sidestepped those with prostitution on their resume, or kept the line strictly Jewish, or omitted David, an adulterer & a murderer.  God could have done it that way, but He didn't.  He chose Rahab.  He chose Boaz.  He chose Ruth.  He chose David.  In a gesture so rich with symbolism it makes my English-teacher heart quiver, God chose the very people who needed Jesus's sacrifice the most to bring Him to earth as a man to make His message plain: He chose you, whoever you are, whatever you've done.

The moral of today's story is that if you want to learn something, teach others about it.  It was not until I taught grammar that I finally learned the ins & outs of English grammar.  There was a time in my life that I avoided like the plague the use of semi-colons because I didn't understand when & how to use one; I drop them with considerable frequency now.  Volunteer to teach at your church even if it makes you uncomfortable.  Volunteer to teach at VBS even if the thought of a roomful of four-year-olds makes you want to sit in the dark with a cup of coffee for a week.  I don't naturally gravitate to the young ones, but that may be where you need to start if your understanding of, say, Ruth is not much deeper than theirs.  No matter the age of the students, if you teach, you will learn.

Next year's VBS theme is, "Wanted: Margaritas for the adults."  Oh, I am kidding.  Coffee & a few dozen Advil do the trick nicely.

Y'all have a wonderful week.  A few more August Mondays & IT WILL BE SEPTEMBER.  My closet has been cleaned out, I am nearing the conclusion of Harry Potter's glorious tale, & so even if the kids & I spend the whole week in our pajamas, I imagine there'll be something interesting about which we'll chat soon.