There's a lot I could chat with you about today, things about which I'd typically go on for several paragraphs.  The list includes: my watching the final hour of Jack Bauer (sadness, tears, anger), my growing frustration with my Russian solider, Alexander, with whom I've hitherto had a fantastic relationship, the new furniture I bought, my new aromatic bag of Costa Rican coffee beans, Reagan's doctor's appointment today, & finally, my budding Twitter fascination.  I am tempted to say many things about everything on this list, & I may well later.  At present, there's a maelstrom of a whole different matter raging in my head, supplanting all else (yes, supplanting Jack, & Alexander, & the coffee, & the furniture), & it is demanding my attention.

This past Saturday was VBS day at our church (that's Vacation Bible School).  Reagan missed VBS last year, her first year of eligibility, because we were in Dallas, so this was her first VBS.  She was highly skeptical of the event when I woke her up at seven thirty Saturday morning.  That's right, rather than an hour here, an hour there during the week, our church rounds up the kids at eight thirty on a Saturday morning & holds them captive for around five hours.  This one-day VBS system has its pros & the obvious con, which is EIGHT THIRTY on Saturday morning.

I had elaborate plans for Saturday.  Phase one was completed when I left Henry at home with Trey & loaded a grumpy Reagan into my car at eight twenty-seven (we were a little late to VBS).  Phase two involved leaving Reagan at the church building where my mom, a VBS volunteer, would check her number & dose the insulin.  Phase two went as planned, with one exception.  I don't know what I expected to see when I arrived at the church building Saturday morning.  I guess I expected to see a handful of groggy adults downing coffee & attempting to corral children.  What I encountered was an army of perky church members wearing matching bright blue T-shirts boasting the logo, "Jesus Is My Superhero," & a church building that had been transformed in preparation for VBS.

The perky blue-shirted army of VBS volunteers made me feel a little guilty about phase three of Saturday's plan, which involved a date with a large carafe of coffee at the IHOP up the road from the church.  I did not break my date with the carafe. 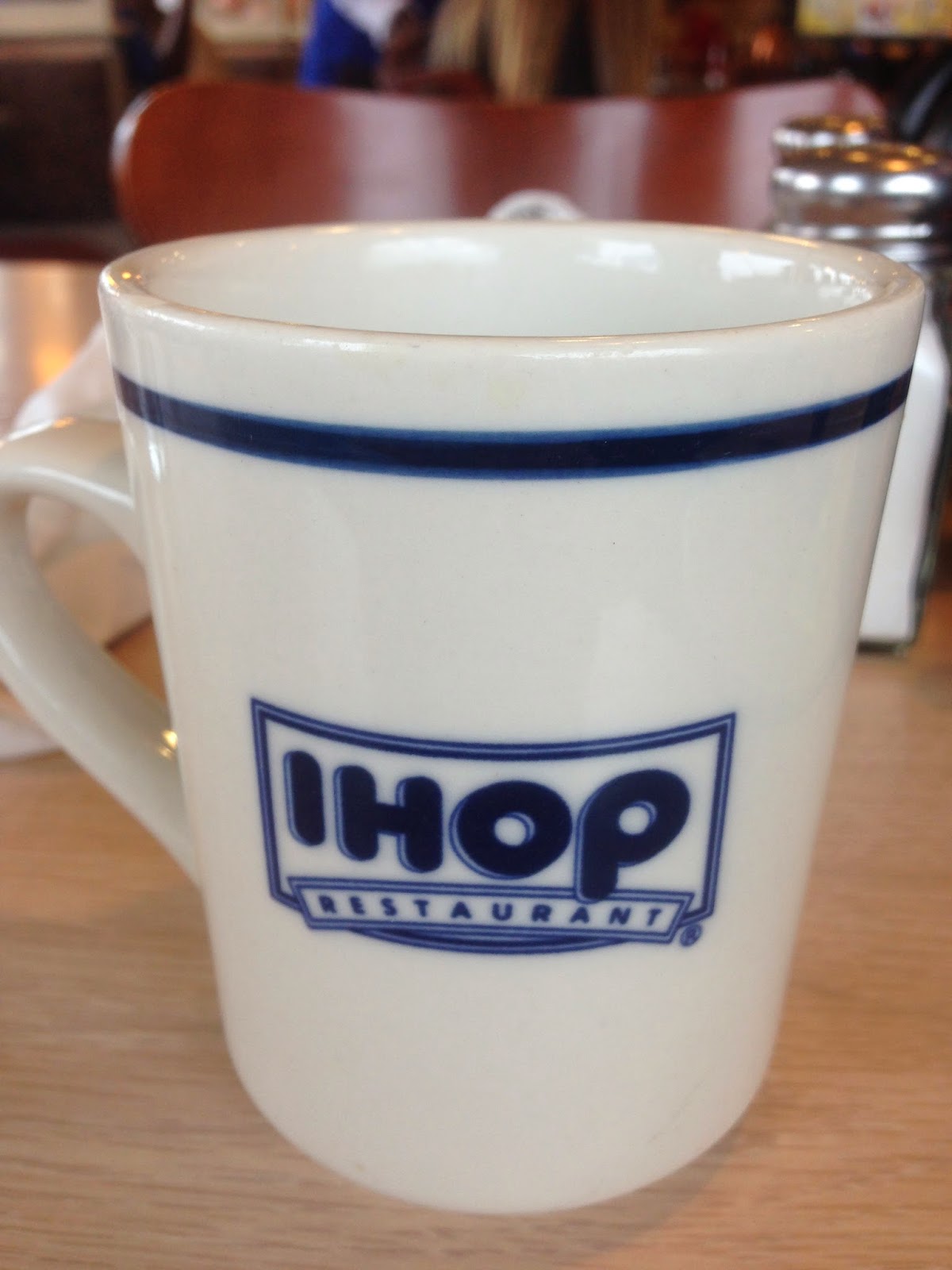 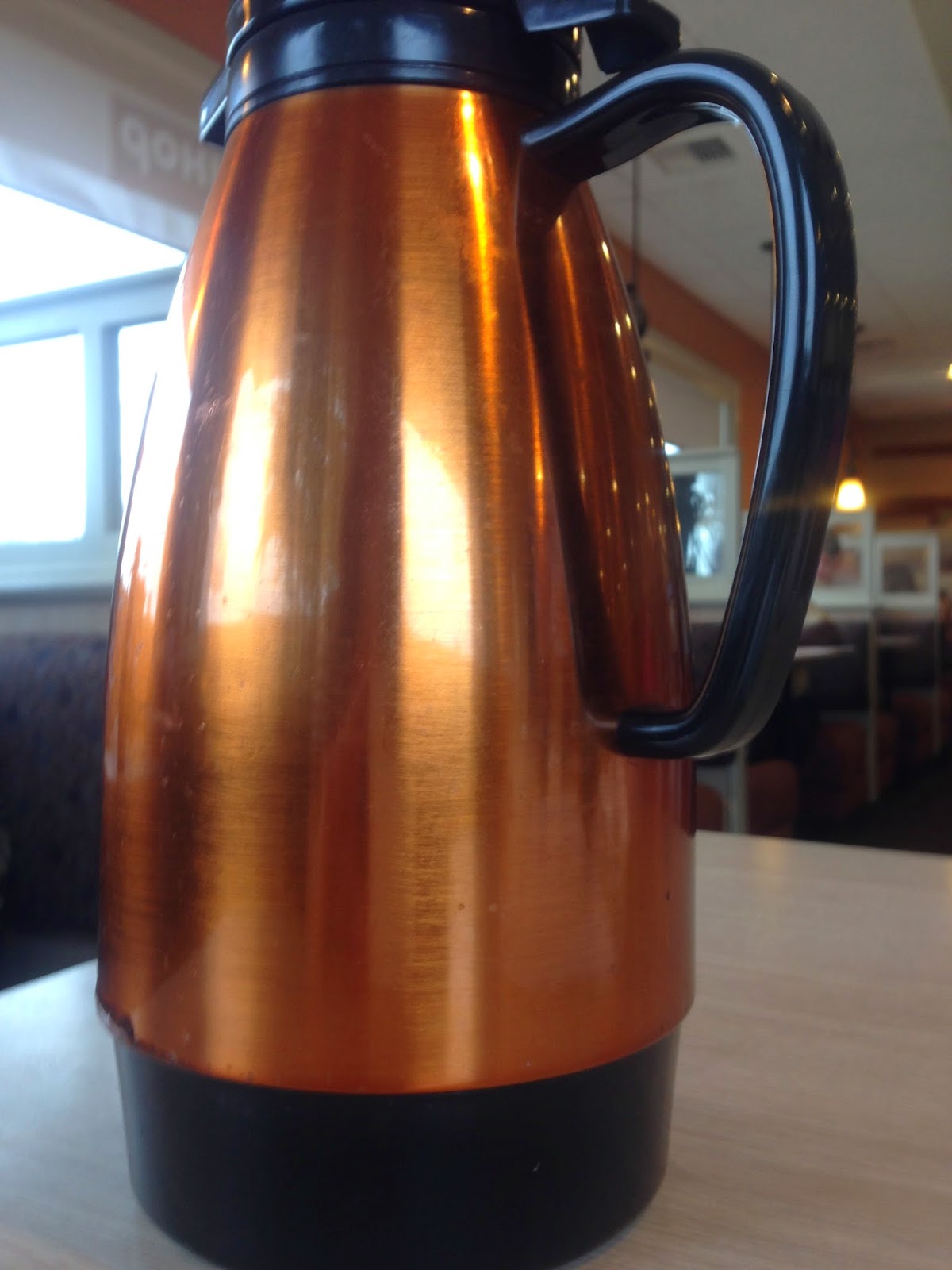 I sat, alone, in the middle of a crowded IHOP.  I sipped coffee (ha, sipped!  I drained that carafe).  I ate a vegetable omelet (it's better than it sounds, & what is also fabulous at the moment is the size of my waist).  I thought about the blue-shirted army I'd just left behind at the church building.  Many of them work full-time jobs, & yet they devoted their Saturday to VBS.  They were up with the sun (or not, really, because it was foggy & gloomy here Saturday, which makes an eight thirty start time even worse).  These people were not only at the building before nine in the morning, they were happy about it - - giddy, even! - - & they'd clearly spent a great deal of time preparing for the day based on the decorations I saw.  I watched a father of four who works many hours a week as a State Trooper lead the kids in songs, complete with appropriately ridiculous hand gestures.  I watched teenagers eagerly devote their Saturday to donning superhero costumes & entertaining the kids.  I watched a blue-shirted army of heroes in action. 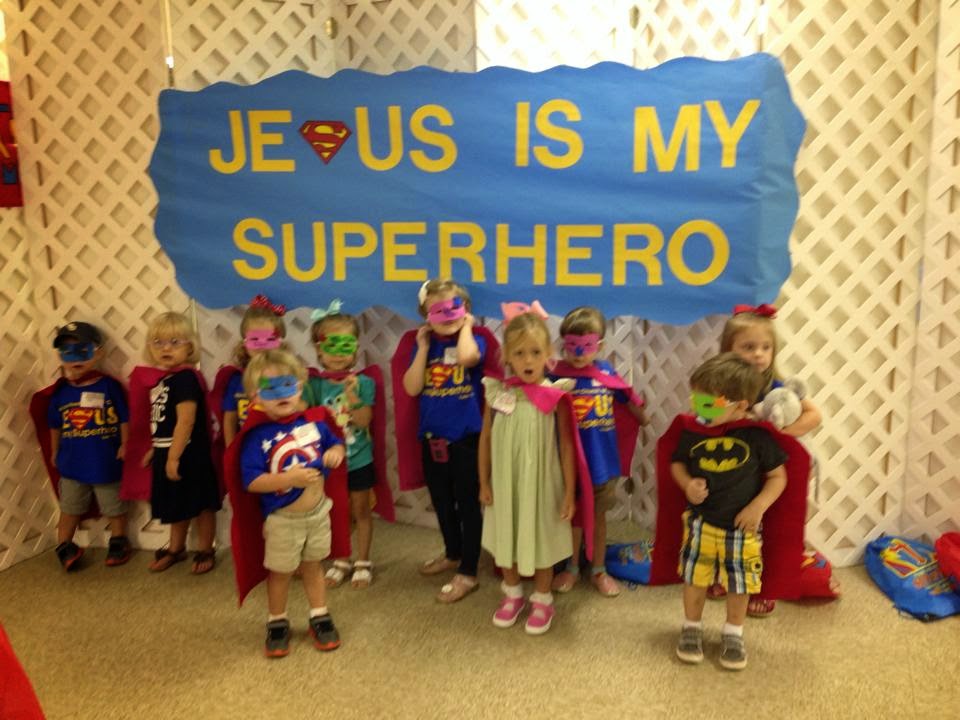 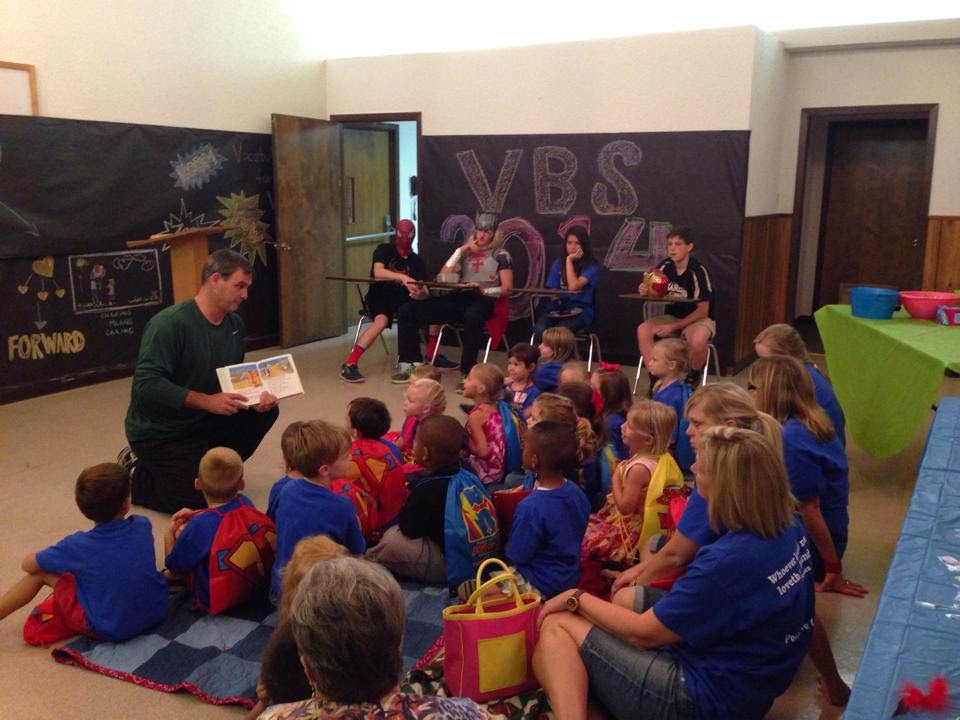 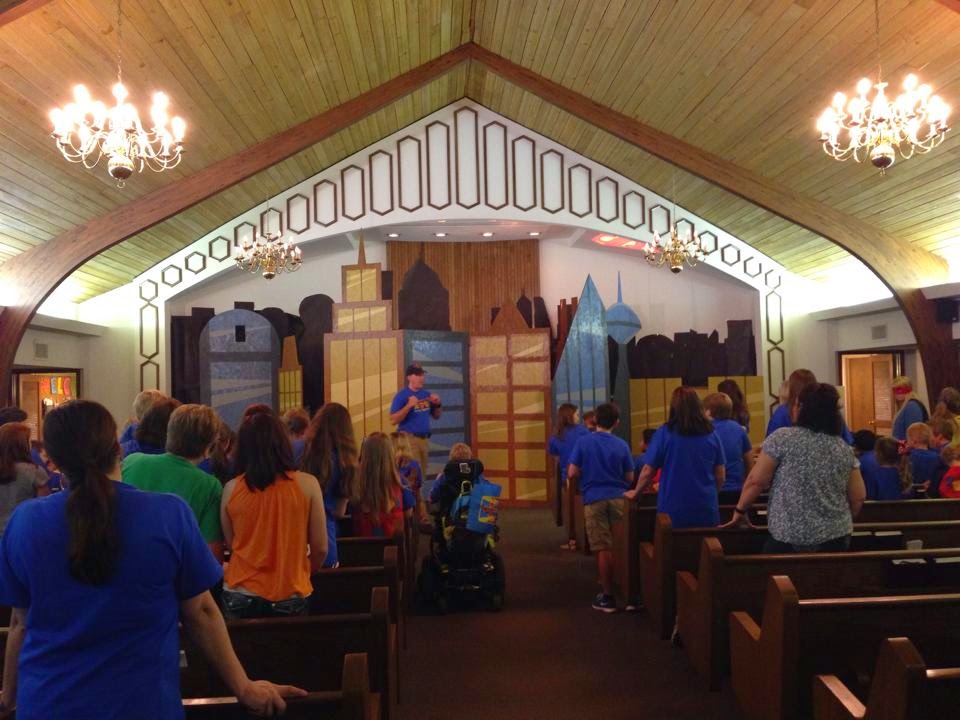 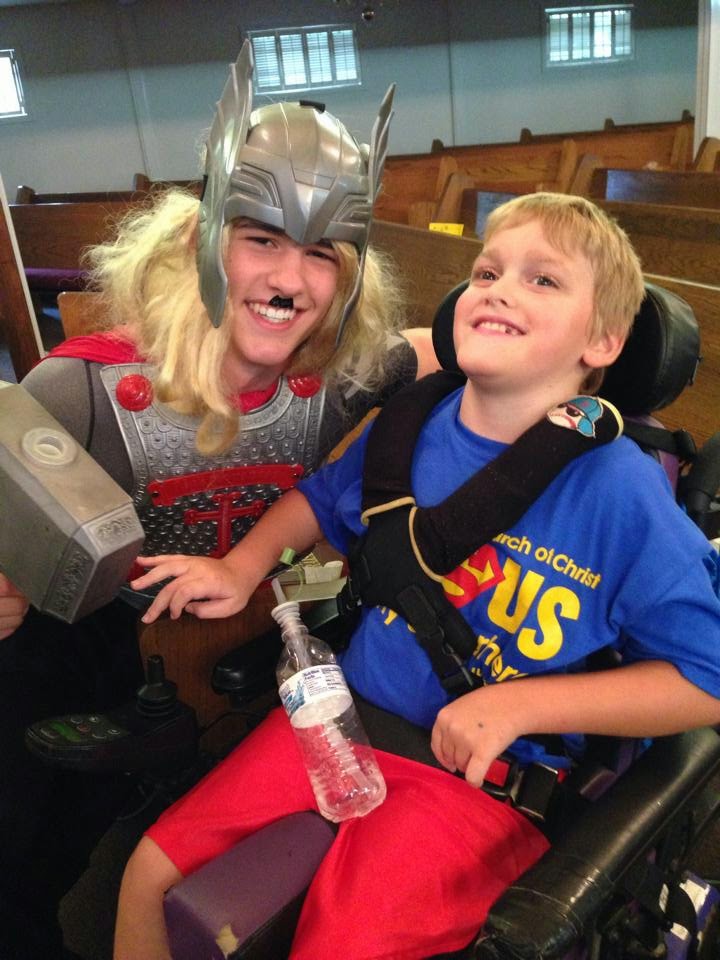 Reagan showed her daddy the cape & mask she made when we returned home: 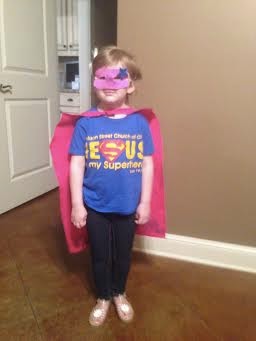 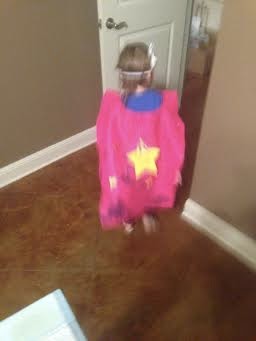 In a contemplative mood, I read a little at IHOP.  I pulled up a few news articles on my phone about a man named Kent Brantly.  You've likely heard the name, but if not, Dr. Brantly is an American who has until recently been leading efforts to combat the deadly Ebola outbreak in Africa.  In the past week, Dr. Brantly was airlifted to the United States where he will be treated for Ebola, having unfortunately contracted the disease himself.

Dr. Brantly's story pervades my thoughts.  I think there are a few reasons for my fixation on him.  He is my age.  He has two young children.  He is from neighboring Texas.  He is a brother in Christ.  He is the most glaring example of Jesus in the flesh that I can imagine.  Knowing the danger to his own health, he chose to continue his mission work.  He saw people in need - - in need physically & spiritually - - & he cast aside the long list of concerns any of us would have about a mission field in which Ebola is a factor, & he continued to provide care to those who need it most, in a place where it is hardest to find.  He said, "Not me, them," which is the loudest, clearest way to shout to a dying world, "Not me, You, Lord, You."

Dr. Brantly is now battling for his life, & while I am a praying individual, I am honestly surprised by how often & fervently I pray that he lives.  At the same time, I repeat Paul's words in Philippians for myself, "For to me, to live is Christ, to die is gain."  I don't know that I've ever so thoroughly comprehended those words.  Obviously no one wants to see this young husband & father lose his battle with Ebola.  The world desperately needs more Dr. Kent Brantlys, but if his physical body loses the war it's waging, to die is gain.  I've no doubt one day, Kent Brantly will meet his Savior, whose selflessness he has so beautifully emulated, face to face, & that will be a great day, whether it's soon, or not for another sixty or seventy years.  To expound on Paul's words, To live is to imitate Christ in every way I possibly can; to live is to do what Christ would do, even if the answer to that question, What would Jesus do?, is treat Africans stricken with a deadly infectious disease.  To die, if that is my fate, is to gain Heaven.  When the flesh fails me, I gain Christ.  This is what's sometimes referred to as a win-win.  I say that not to minimize the magnitude of the physical struggle in which Dr. Brantly is currently engaged, but to highlight what I hope he already knows, that if, like our Lord, he is only given thirty-three years in the flesh, few can say they did so much, & impacted so many, in such a short time.  If he dies, undoubtedly it will not seem victorious; his gain will not be evident to the world.  When Christ died, Satan rejoiced.  If Dr. Brantly dies, Satan will rejoice.  However, that's not the end of the story; the hero always returns, you know.  When Christ rose, Satan was silenced, & because Christ rose, Dr. Brantly will too, & again, the villain will be silenced.

Thank you for your example, Dr. Brantly, & may God bless you as richly as you have blessed others.  You are a hero.

Jesus is, indeed, a superhero.  He is the definitive superhero, for all the others  - - the blue-shirted army of volunteers & Dr. Brantly - - can do immense good, but they need a hero, too.  They are heroes for humbly pointing others to the superhero, Jesus Christ, who defeated what no other man has or will ever conquer, sin & the subsequent death that follows.

In her novel The Tenth Circle, author Jodi Picoult states that, "Superheroes were born in the minds of people desperate to be rescued."  Our culture's fascination with superheroes speaks to our innate understanding of our own frail, human condition.  We can't fly, we can't scale tall buildings, we can't cure cancer.  Or diabetes.  Or Ebola.  For all our technological & medicinal advances, deep down, we know we are slaves to our mortality.  Ms. Picoult's statement begs the question, Rescued from what?  Ebola?  Death?  Hell?  Yes.  Yes.  Yes.  A desire for a way out of this sin-sick world is not a desire born of desperation, in my opinion.  Those who seek a way out are wise; they listen intently to the voice of their Creator who calls to them in a thousand different ways.  There is only one way out, & praise be to God for people like the blue-shirted volunteers, & Dr. Brantly, who found the way, & are showing others as they await rescue.