Life & Death on June One

It does not matter how slowly you go as long as you do not stop.

It's June 1, which means, among other things, I have to remember to give Sophie her heartworm pill today (& then dutifully erase the reminder from my nifty Pottery Barn chalkboard, which was purchased when, in the middle of diabetes & nursing Henry, I once forgot to give Sophie her heartworm pill for almost three weeks . . . if you know me, you know that is just not who I am).

I know that on Monday, June 1, 1998, I attended a funeral, & then a burial, for my cousin, Elizabeth.  I know what I wore. I wore this dress (I don't have a better pic, but it's a long, sleeveless dress with the same all-over pattern you see here in this snippet): 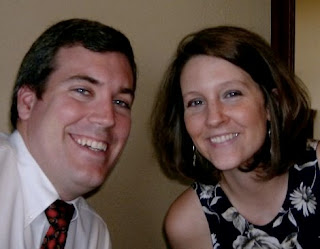 This picture was taken a few years later, but this is the dress. I still have it. I no longer have the huge, chunky dark brown sandals I wore with it to the funeral; I believe those went the way of Goodwill many years ago, & that was for the best. I didn't realize at seventeen that this dress needs a much lighter pair of shoes than the deep chestnut brown ones I routinely wore with it my senior year of high school. You grow, you learn.

I know this picture was taken a few years after the funeral because at the time of Elizabeth's death, Trey & I were not dating, though he was not a stranger to me; he was, in fact, a flirtatious non-stranger. When I pulled in the parking lot at the church that morning, I saw Trey's car, & my heart leapt a little, though intellectually I knew he likely wasn't there. I was right; he wasn't there. His mother had driven the hour north to attend the funeral, because she is, as all who know her know, a saint (who could have been spending the day with her mother, as it was her birthday).

We all went to my Aunt Donna's house after the burial. I remember lying on this amazingly soft leather couch Donna used to have in her living room. It was always the designated pass out spot for me & my sister when the family gathered at Donna & Bryan's house (I suspect it emitted opium or something). The leather covering of the couch was cold, & it felt amazing on that hot June day. I dozed awhile, hearing bits & pieces of conversations I wanted to hear, but also didn't want to hear, & then we all began to disperse.

I vividly remember driving back to my parents' house, my house at the time, given that I was ten days a high school graduate, in my new black Pontiac. I was alone, & I was listening to an Eagles CD (their greatest hits, Volume I . . . so much greatness). I remember my thought pattern as I drove was along the lines of Well, what now? We were scheduled to leave for Florida later that week, but it felt wrong to go, to be excited about, well, about living.


Flash forward fifteen years to Saturday, June 1, 2013. Trey & Reagan & I ate lunch & then birthday cake at his parents' house in celebration of his grandmother's birthday. I know it was June 1 not only because her birthday is June 1, but because I was days away from jettisoning this one . . . 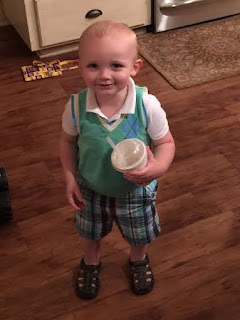 . . . who was born in the early hours of Thursday, June 6, 2013. I can't believe he's almost two, & I am sure that's a significant factor in this whimsical exploration of the ghosts of Junes past.

Here we are in our waning days as a family of three, having just enjoyed Mrs. Ray's birthday cake. I am aware of my considerable girth (on full display in that nice white shirt), but keep in mind that Henry was twenty-one inches long & weighed over eight pounds. Also worth noting is the socks & crocs combo Trey's sporting. 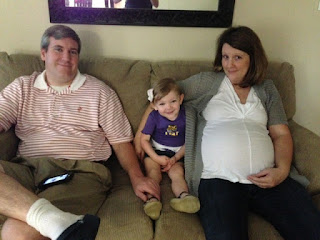 Since my drive home from my Aunt Donna's after Elizabeth's burial, seventeen years ago today, there have been a few times I've been plagued by similar feelings of uncertainty, of helplessness. There's no how-to for navigating life at any juncture, particularly those that truly change life as we've known it.  When someone leaves, or someone new comes along, emotions are high, & the underlying questions are basically the same, What now?  How do I do this? I felt this way on my drive home from burying the first person I ever lost, I felt this way when I brought Reagan home, & I felt this way when I brought Henry home, because while I had some experience caring for a newborn, I had no experience caring for a newborn while simultaneously caring for a two-year-old.

Whether saying a sad goodbye or a greatly anticipated hello, or dealing with the crippling panic I felt when we brought Reagan home from PICU after her diabetes diagnosis, the answer is the same: just keep going. Yes, it is okay to enjoy driving alone while listening to the Eagles. Yes, it is okay to go to the beach. Yes, you will laugh again. Yes, you will sleep again. Yes, you will wear pants that zip again. All the things that were true yesterday are still true today: Jesus is Lord, He loves you, & He is coming back for you.

Nothing changes truth, not death or new life or challenges that, in low moments, you think you cannot overcome.

I'll close with some of the final lines of Mockingjay.


I know this would have happened anyway. That what I need to survive is not Gale's fire, kindled with rage and hatred. I have plenty of fire myself. What I need is the dandelion in the spring. The bright yellow that means rebirth instead of destruction. The promise that life can go on, no matter how bad our losses. That it can be good again. And only Peeta can give me that. 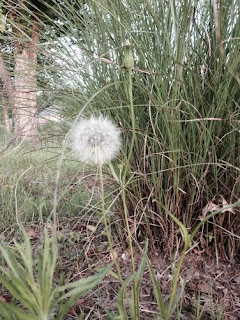 (I did not swipe this pic from the Internet;
I took it myself while I was walking Saturday)

You'd have to read the entire series to fully appreciate the visual of the dandelion, but suffice it to say, for Katniss, it's associated with Peeta & a time in her young life when starvation seemed inevitable.  If you've read Mockingjay, you know it's a bleak book (yes, bleaker than the first two books in which kids are thrown in an arena to fight to the death). The impending war with the Capitol that's foreshadowed in the first two books has come to fruition, & it is brutal. As I read the final novel in the series, I wondered constantly how Collins would end it all. Yes, naturally I was a bit frantic to know Peeta's fate; Collins is not afraid to kill a main character, & there are some gut-wrenching deaths in Mockingjay.

I love the way she ends it, with a flicker of hope for two young people who've suffered immensely, & who've finally returned home, with literally nothing but each other. It's only appropriate that the girl on fire has something left with which to stoke one last flame.


I am certain I will again find myself alone in the driver's seat as I was that Monday afternoon in June so many years ago, wondering what the next step is, seeking a new normal, curious if normal is again possible. In those moments, I pray I will, like Katniss, cling to the hope of rebirth, both the visual we see on display each spring, & more importantly, the glorious rebirth that's possible in Christ, whose love & faithfulness to His children is a certainty even when absolutely nothing else seems certain.