A Quilt for the Fourth

Intellectually, I am aware that people, a few people, read this blog (hi, Mom!).  I don't want to hurt any feelings, or step on any proverbial toes, & I love that you read, but I keep up the blog for my kids, who will reap the benefits of my wisdom (or at least have something tangible to show their therapist), & for, well, me.  I like to write, & I like organization, & blogger is an amazing tool that allows me to combine the two.

With that said, after blogging for over three years, I am quitting.


Ah, I kid.  I remain curiously flattered that people read, & am often flummoxed when blog content is mentioned in the real world.  It's usually a George Costanza, worlds are colliding moment for me.  These moments are occurring with some regularity lately, & several questions have come my way, & I'm going to delve into their answers below.

I didn't see all that many people last weekend, but was surprised by how many times I was asked about the outcome of last Friday's big book club meeting.  Overall, it was a success.  We ate cookies & drank coffee, & for two hours, there were no toys on my living room floor.

For those of you not fortunate enough to attend, a snap shot of book club: 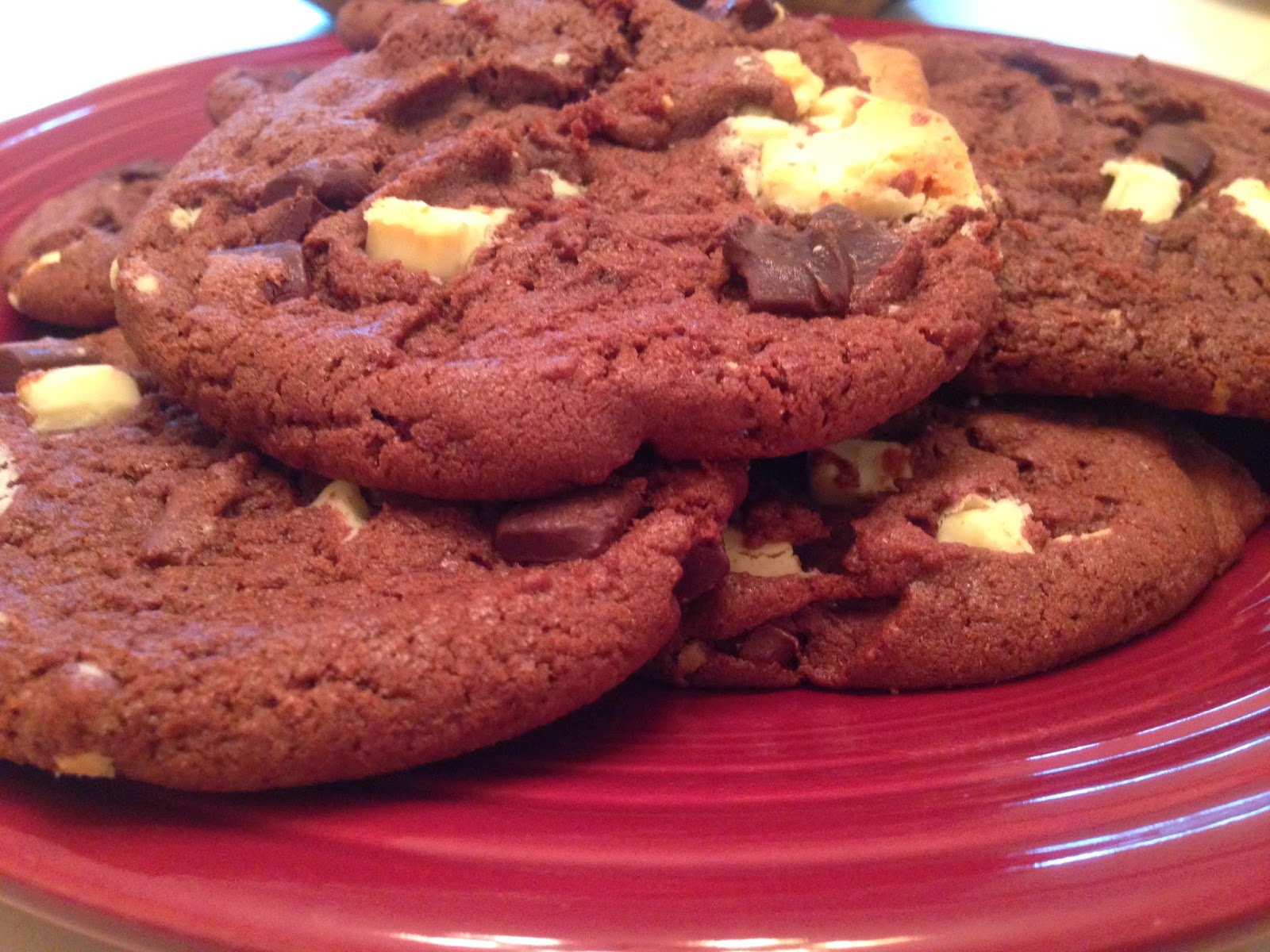 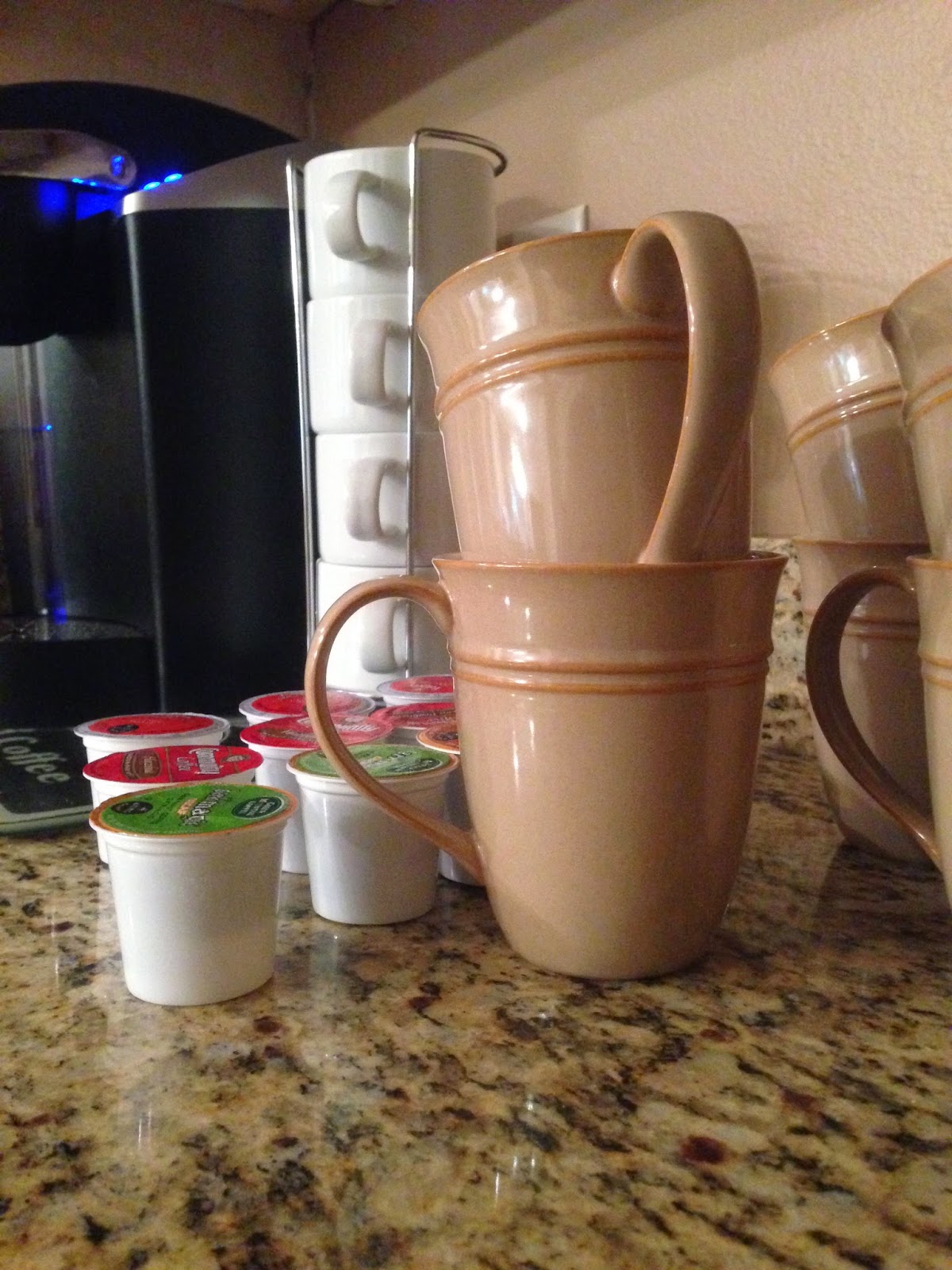 Below is my living room: 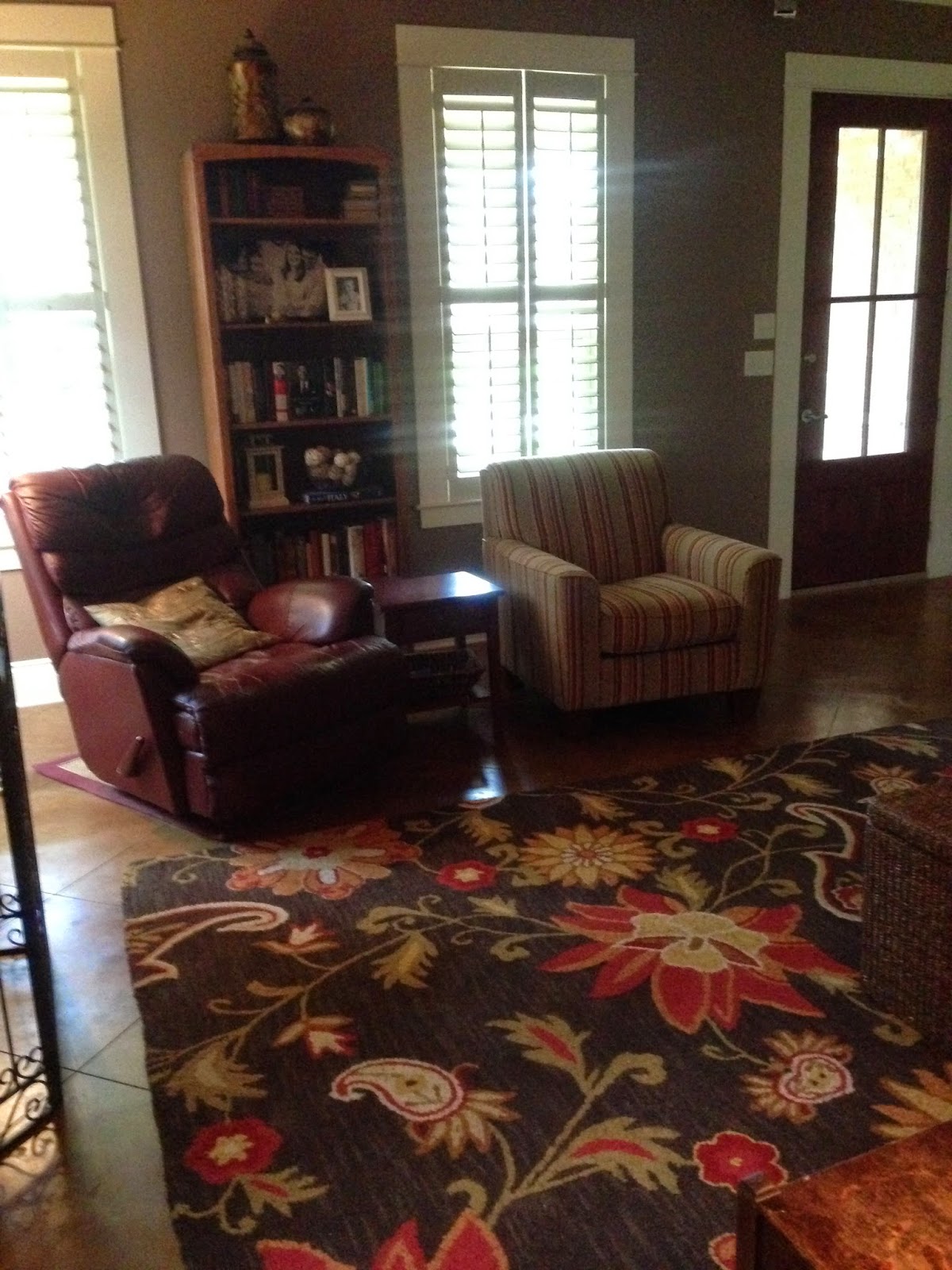 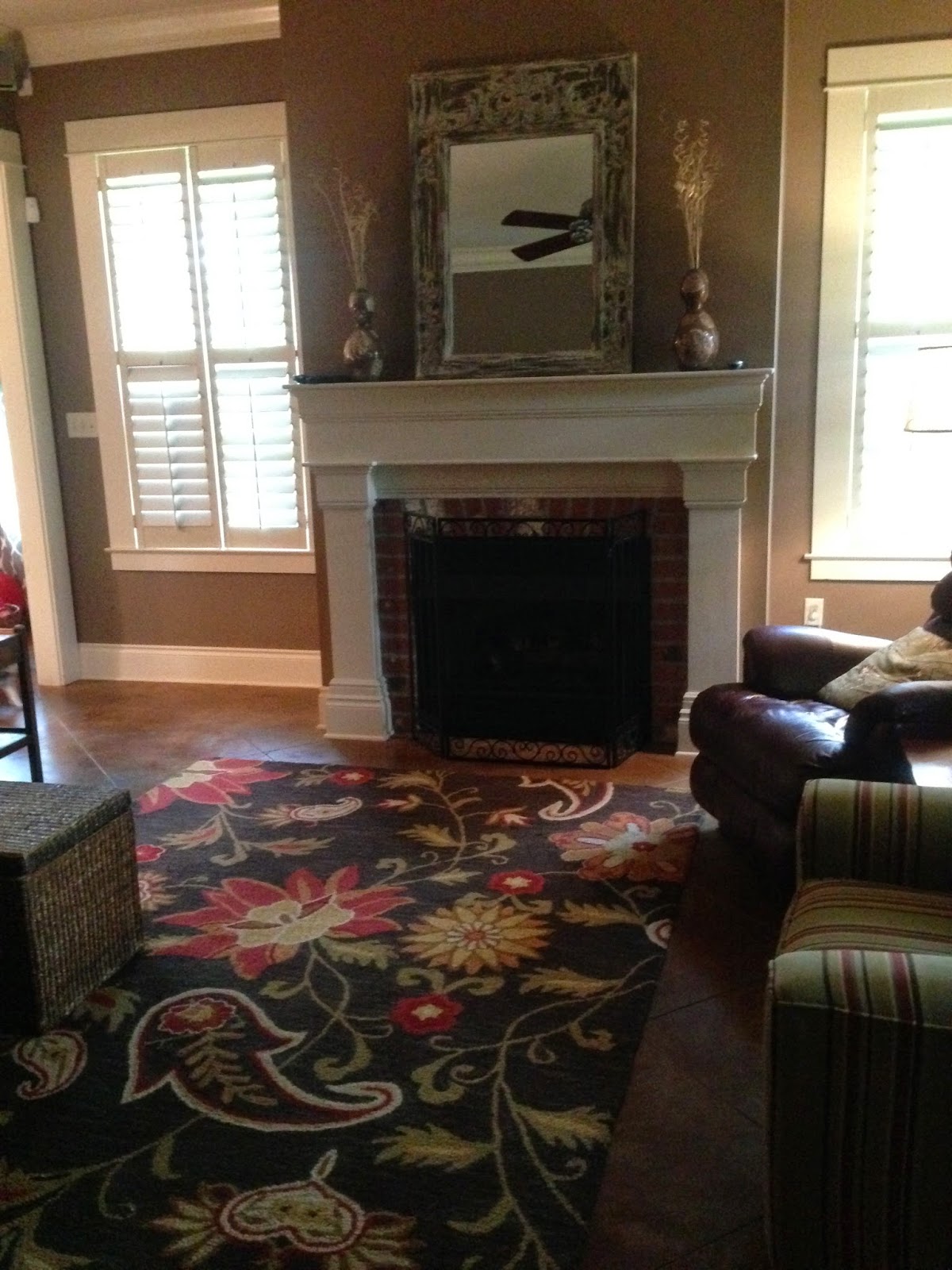 Do you see all those toys on the floor?


No one raved about A Farewell to Arms, but thoughtful comments were made.  The consensus, I'd say, was that they felt scholarly for having read Hemingway.  I'll take it.  As soon as I finished reading A Farewell to Arms, I headed to the Soviet Union, & that's where I remain, so the book club ladies were given a reprieve from a lecture lively soliloquy on why the novel is fantastic; I can only thoroughly obsess over one book at a time.  We did discuss my having not read Pride and Prejudice, & have decided to read it in December of this year.  Everyone knows married women with small kids want Mr. Darcy for Christmas, so we're gifting ourselves this year.

At the end of May, I posted this little manifesto that, in retrospect, highlights a short list of goals I set for myself, with the understanding that should I accomplish nothing on the list, I am still fabulous.

My manifesto contains a short-term reading list I generated, because lists make me feel warm inside (but not as warm as checking items off a list).  One thing I do love about the blog is the conversations about books it generates.  If you read the blog, you are well aware of what I am currently reading because I do not shut up about it.  In fact, I suspect some use the blog as a gauge indicating whether striking up a conversation with me is a good idea or not . . . She's reading another war novel . . . quick, turn and go out that back door.

Last Sunday morning I was with Henry in the nursery at church & was talking with a friend who told me she wanted to sit & write a rebuttal to my review of The Fault in Our Stars, which recently shifted from my 'to-read' list to my 'read' list on Goodreads.  Her desire to reply to my little rant about the book was like a shot of adrenaline for me.  If you're reading, kind friend, & you do find the time to sit & type it out, let me know because I will post it here & you can be my first guest blogger.  Won't we all feel fancy then?

So, I have read The Fault in Our Stars (check).  I reread A Farewell to Arms (check).  I have read The Bronze Horseman (check), as you well know.  I have not read Anna Karenina, & I'm not beating myself up over it, given that I am in the middle of a three-book series by a Russian author whose authorial goal is clearly to use as many words as possible.  I'm currently splitting time between American & Soviet soil in the second book, Tatiana and Alexander.  Every few thousand words, I fall a little deeper in love with Alexander, & curse the Soviets, & the Germans, & refill my coffee, & repeat the process.  My goal is to read the third & final book, The Summer Garden, before my teaching duties commence in August.  I usually try & slow myself down when reading the final book in a series because I know once I finish that last book, it's all over, my dalliance with the Soviets will end, & I'll have to tell Edward Peeta Alexander goodbye.

Still on the reading list are Ron Rash's Serena, & a recent suggestion, Emily Giffin's The One & Only.

Moving past the reading, twice in as many weeks I've been asked about a sequel to Dear Miss Moreau.  Yikes.  Alexander has temporarily usurped Dr. Foster's place in the addled space in my brain reserved for fictional men for whom I will labor into the wee hours of the morning.  I've written a little.  The word count hasn't ticked up significantly, however, I have worked out a few issues that were stumping me, so I'm sure you're ecstatic about that.  It's tricky when you keep writing for the same characters, & the conflict in their story is no longer their unexpressed, but deeply felt feelings for each other.  But, conflict comes in many shapes & sizes (don't worry; I am not sending anyone to war, or Russia).

Another item on the manifesto is weight loss.  I have lost weight; I have lost about ten pounds (check).  I can't very well preach self-discipline & then do nothing about the weight I wish to lose, right?  That would make me a liberal hypocrite.  I am happy with the loss thus far, but am not done shrinking myself.  It hasn't been incredibly difficult, but I think it will become so as I attempt to lose another ten pounds.  The first ten had been hanging around nonchalantly, very noncommittal, since Henry was born, & it wasn't all that stubborn about falling off.  The second ten has been with me longer, & I don't think it's going to be all that excited about its departure.  I exercise, & I eat less & better.  No fancy diet or anything.  I try to limit the amount of bread, pasta, potatoes, & sweets I eat.  If I eat carbs in excess, it's fruit.  My snacks are Reagan's snacks: carrots, cucumbers, almonds, cheese.  Knowing how many carbs are in things comes in handy; I often visualize the insulin I'd have to draw up were I feeding Reagan something, & that is an incredibly helpful tool, I've discovered.  Also helpful are these flavored Almonds. 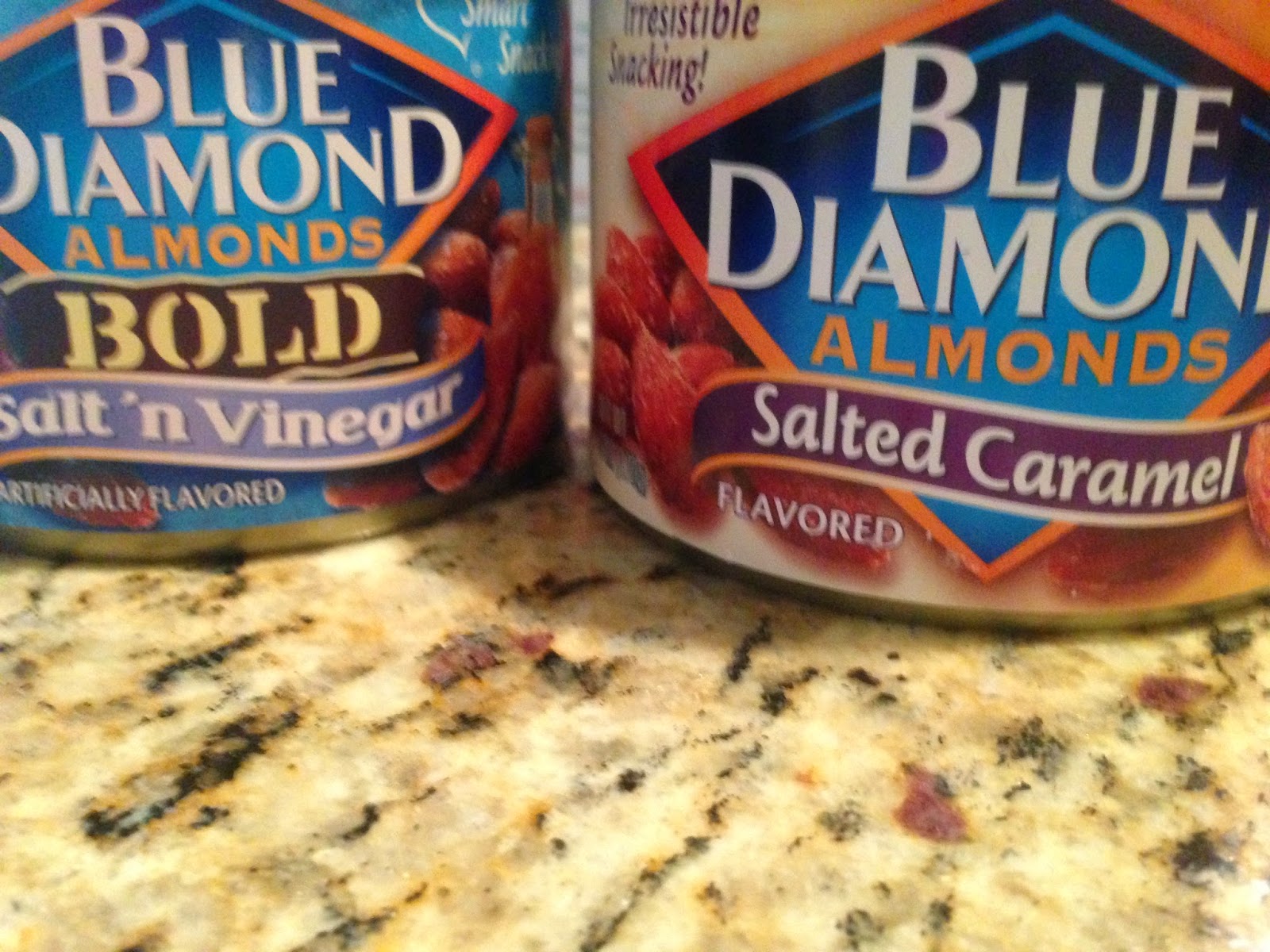 The salt & vinegar almonds are indeed BOLD as advertised, but they keep me away from my beloved salt & vinegar potato chips.  If you take nothing else away from this post, remember this: potatoes, in any form, are just not congruous with weight loss.  There's no way around this simple truth.

Trey is still not drinking Diet Coke.  We still have no cable.  Yoda would say, holding steady, we are.  As you might imagine, I wanted my FoxNews Monday morning when SCOTUS started rolling out the good news.  I've read so much about the 5-4 Hobby Lobby decision that I don't have much to say, other than, YAY!, & also I wish I didn't completely expect the lunacy coming from the left over this, but I very much expect it, & they continue to deliver.  I think if I hear or read the phrase War on Women one more time, I will pitch a fit Reagan would envy.

What SCOTUS said Monday is that an employer doesn't have to pay for certain contraceptive measures if those measures violate their faith.  No one is limiting your options, ladies (& I use the term ladies loosely), you just might have to pay for some of them yourself if they result in the death of an embryo (if only we could figure out how these pesky embryos end up in the womb in the first place!).  It is pathetic that we label some of these measures 'contraception' anyway, as if a condom, the birth control pill, the morning after pill, & an abortion are all equally wonderful forms of contraception.  Okay maybe I have a little to say.  So much of what we bicker about comes down to who is picking up the tab, because not only do many Americans want to indulge themselves & exercise their right to make terrible choices, they want someone else to pay for the consequences of those choices.  Isn't it ironic that liberals are furious over five men making this decision regarding who has to pay for contraception, but these same people think the federal government is the ideal body to oversee healthcare for everyone.  Last time I checked, the Supreme Court is a part of the federal government, & their hand was forced on this issue because of the federal overhaul of healthcare.  Unfortunately, liberals cannot appreciate this irony because of their blinding hypocritical rage.

You may've missed it among all the SCOTUS news Monday, but, despite his earlier statement that he was not going to seek reelection in the fall, Vance McAllister reversed himself Monday & announced he is indeed running in the fall.  Sigh.  Clearly he's not a blog reader; I think I specifically stated my desire for him not to seek reelection.  We can do better than Mr. McAllister, people of Louisiana's 5th congressional district.  I want my congressional district to make national news because we've done something awesome like sending Eric Cantor home in favor of Dave Brat, a political novice who spent $150,000 & managed to unseat a powerful Republican leader (whose actions were not those of a Republican, or a leader).  Let the kissing congressman stay home & kiss his wife.

Quick story: Trey bought a gun safe, which I'm guessing is as interesting to you as it is to me, however, it is noteworthy because the safe came in a big BIG box.  My mom was at the house Tuesday & worked some box-cutting magic, & Reagan's efforts to hoard toys/taunt Henry have been revitalized.  The box is deep, & as you can see, is equipped for surveillance.  I'll have to get some additional pics of Reagan's new fortress; she has announced she's going to paint it.  So, don't think about stealing Reagan's toys, & don't think about trying to steal all of our guns (because even Trey can't figure out the combination to the safe at the moment). 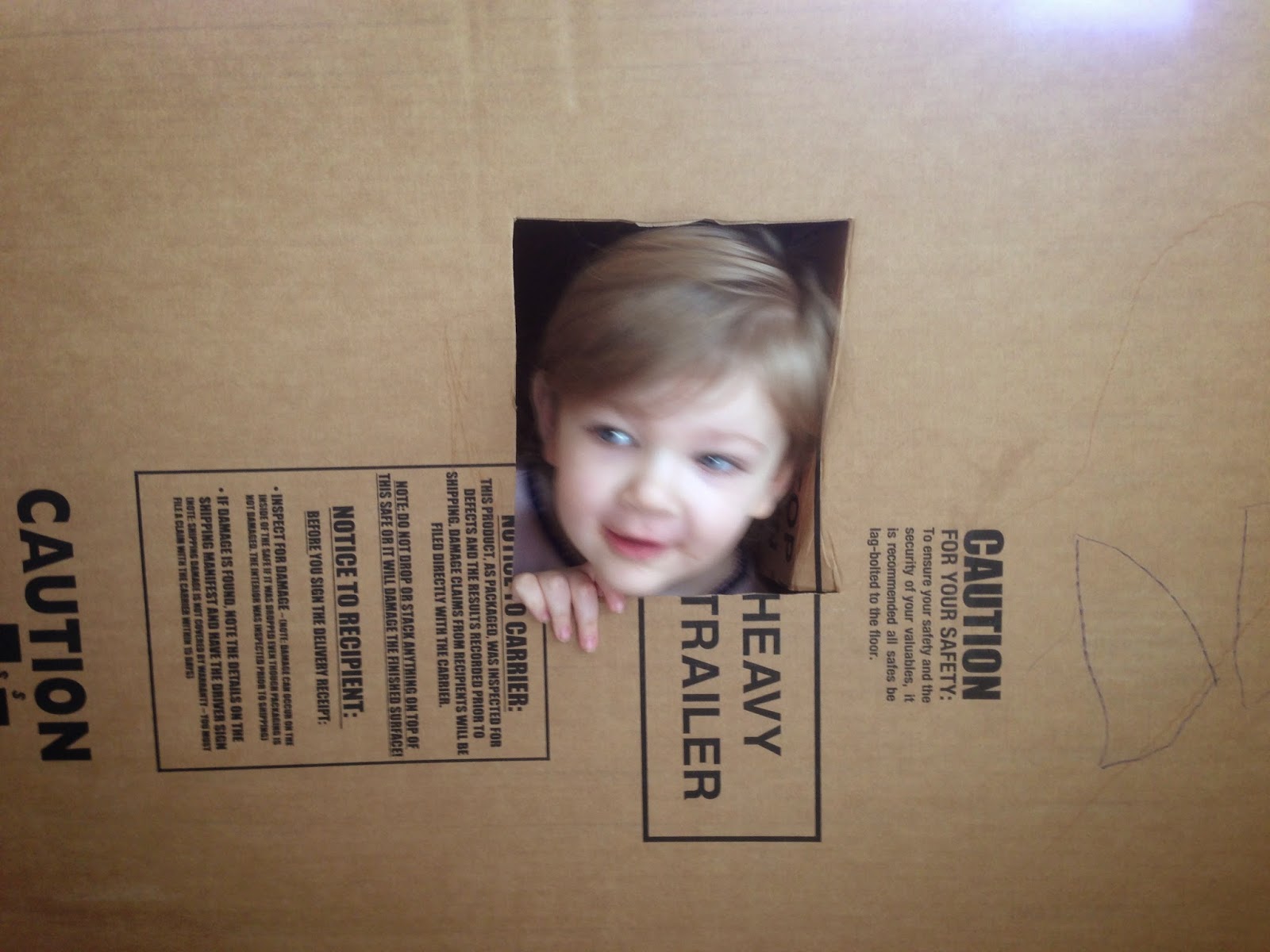 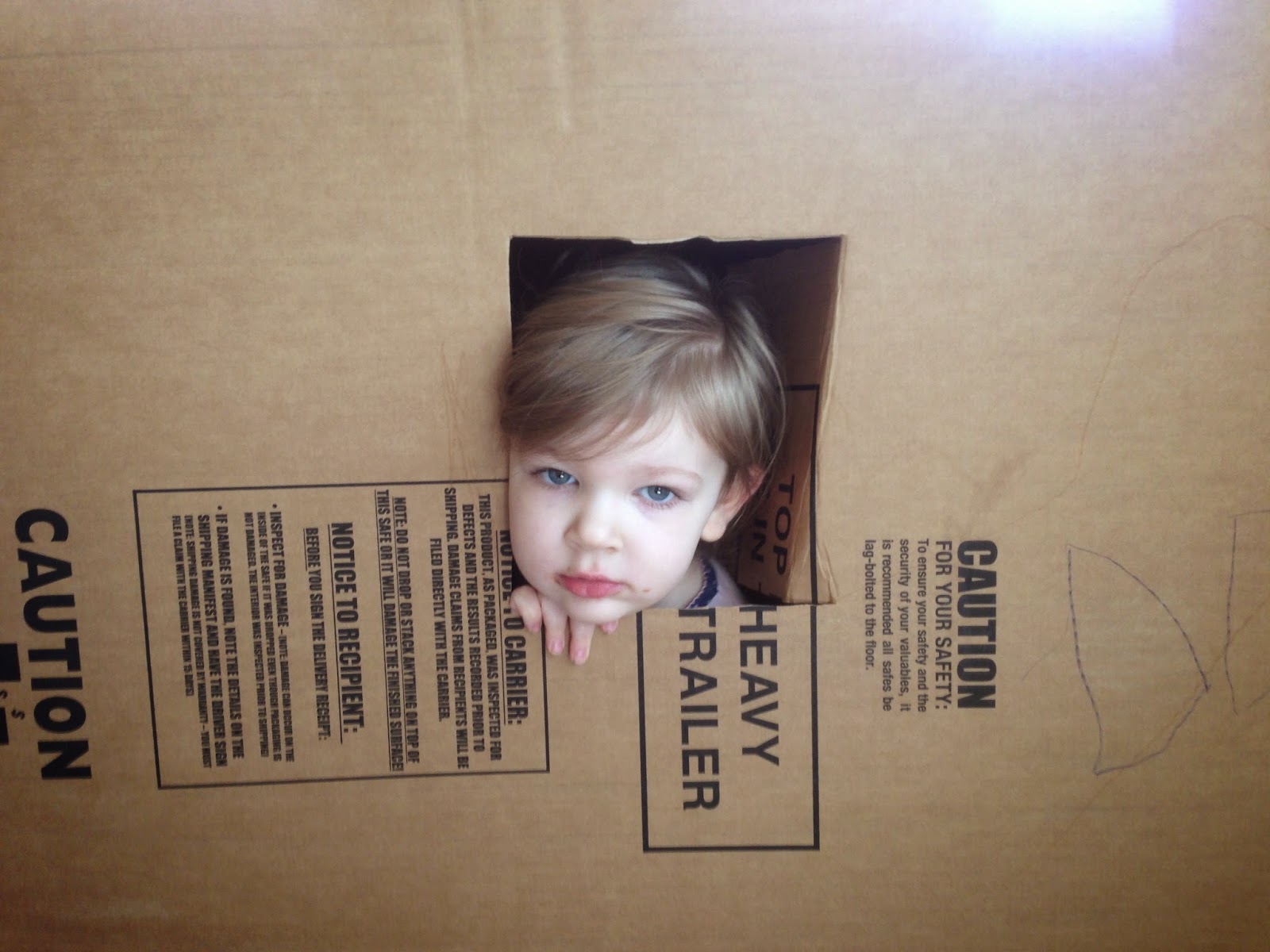 I hope you have a wonderful July 4th.

Here are my kids last July 4th.  Henry was not quite a month old.  His thighs have grown larger this past year, while mine have grown smaller: 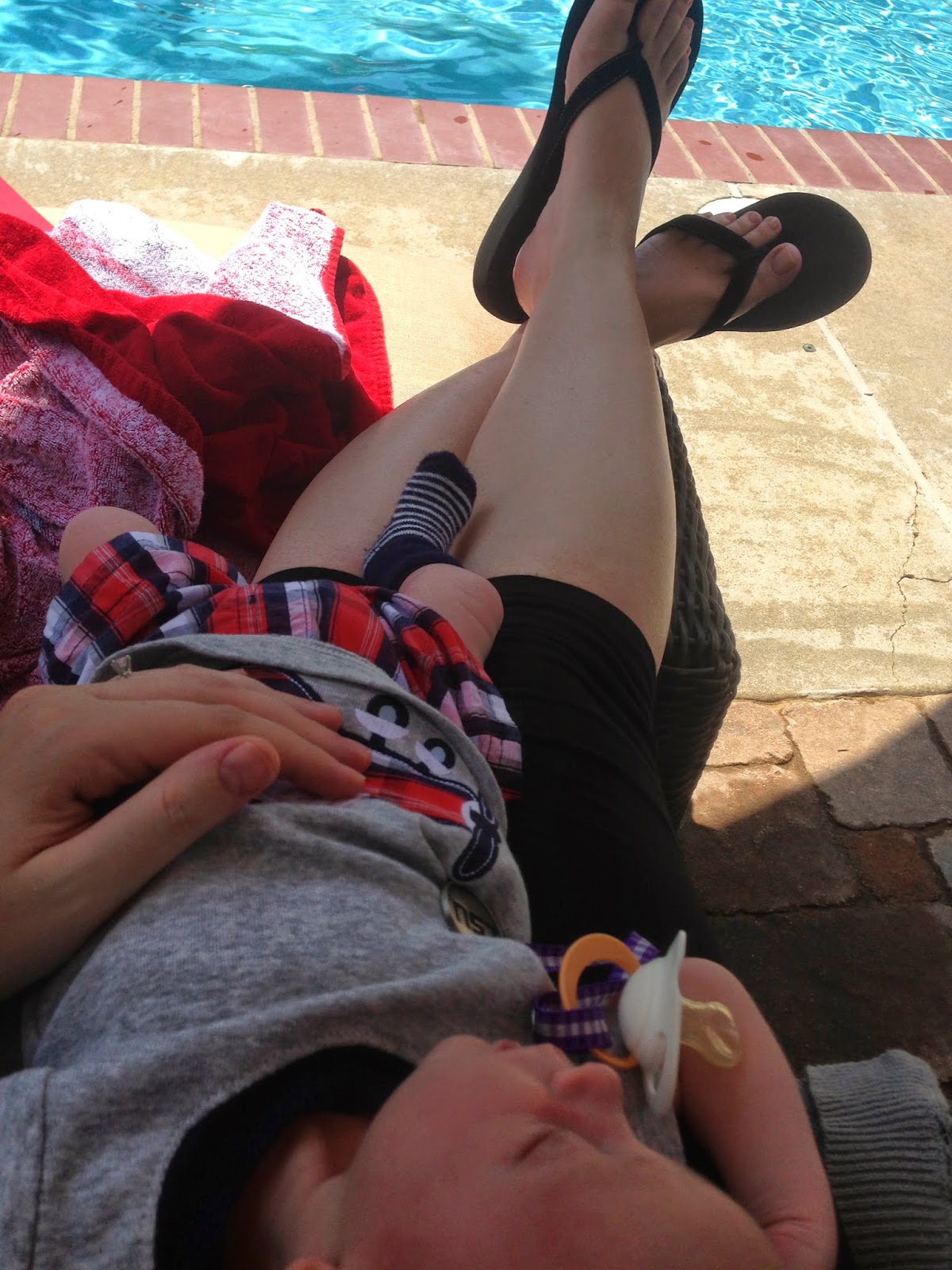 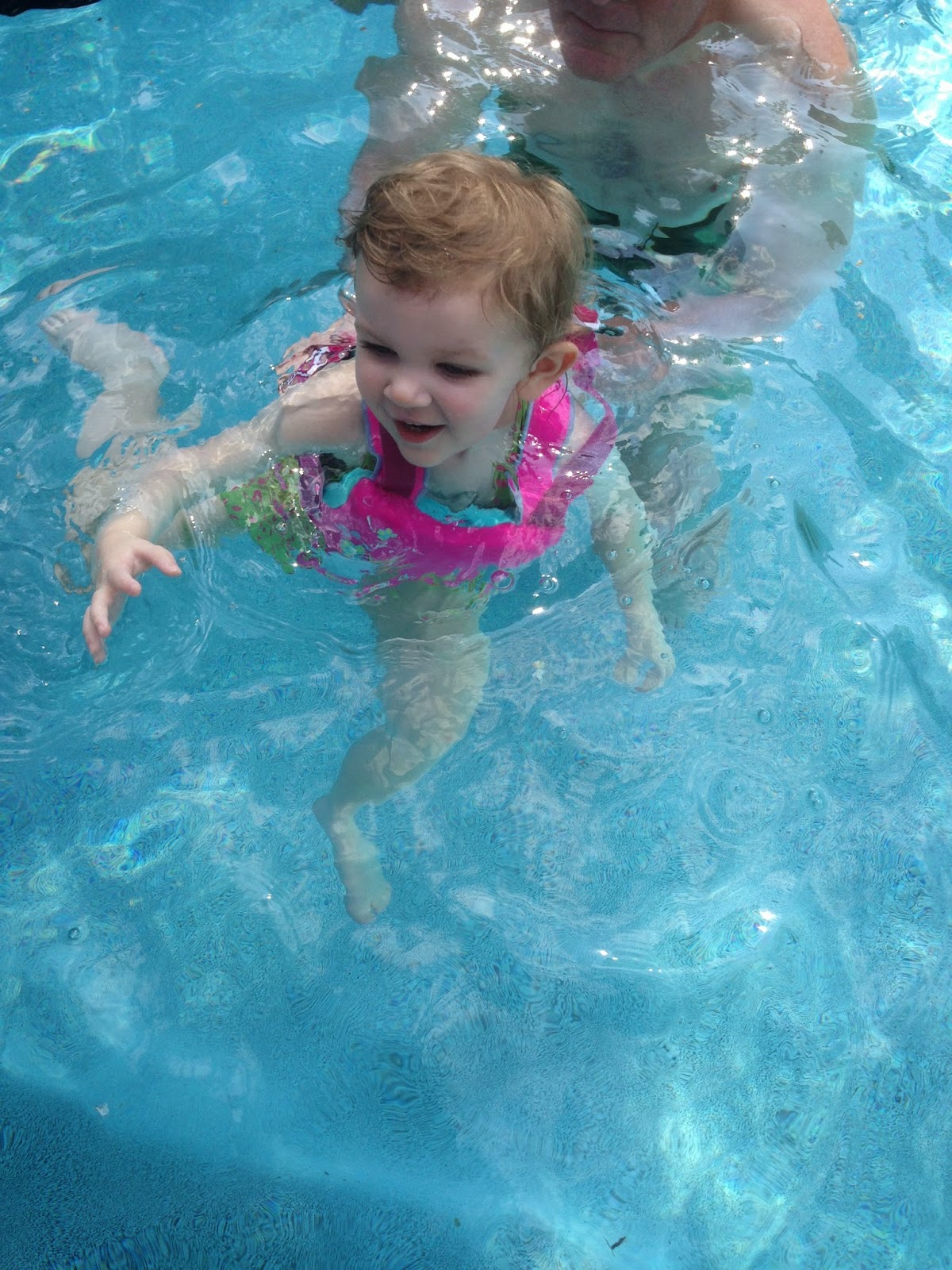 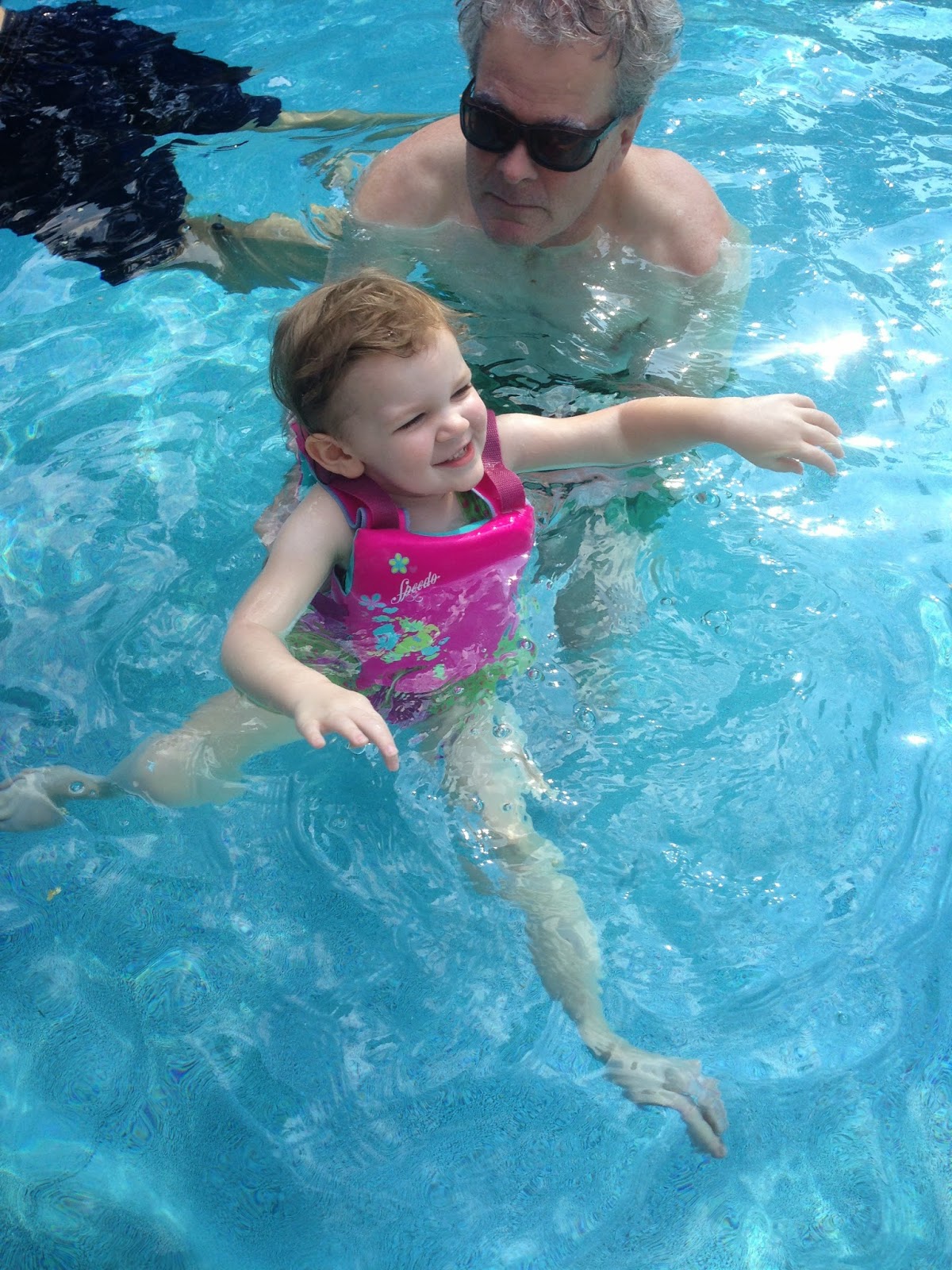 I hope you didn't think I had sewn some sort of patriotic quilt.  There's many a topic covered on this blog, but I think you know by now that sewing is not, nor will it ever be, a topic of interest for me.  I finished writing this, & it's such a patchwork of thoughts, & the post needed a title, so there you go.  Children grow, seasons change, but you can always be certain, I have not sewn a thing.