(Can you tell I worked on that opening line for a while to make it as gripping & poetic as possible?).

I'll start with the negative & gradually make my way to the more positive happenings.  Last week was a bum week for the state of Louisiana, & if you're an LSU fan who happens to live in Louisiana's 5th congressional district, your week went from bad to worse.  The week began with the Vance McAllister scandal breaking (see here for an emotional tirade re:the Vance McAllister scandal), &, while the political repercussions from this scandal are not yet known, our cozy little congressional district now has the distinct honor of being represented by a man the national media has dubbed the "kissing congressman."  Fabulous.  Go google "kissing congressman."  The week ended with the news that former LSU football player Tahj Jones was shot by Brandon Winey, also a former Tiger, over a woman.


Can we get it together, Louisiana?  We need some positive press before our gubernatorial election is in full swing & the ghosts of David Vitter's past come out to play.

On Thursday of last week, Kathleen Sebelius resigned as Health & Human Services Secretary.  I suppose she felt she'd done all she could do, & seeing as there are few possible remaining ways she can destroy the nation's healthcare system, she decided it was time to return to private life.  Thanks so much for your service, Kathleen.  Were he not dead, I think Jack Kevorkian would be a shoe-in as her successor; I mean he was honest about his intentions, which is far, far more than can be said of Ms. Sebelius & her former boss.


Amid the media's coverage of Sebelius's resignation, you may've missed another, equally important announcement at the end of last week.  Summit Entertainment made the official announcement that Allegiant, the final novel in Veronica Roth's Divergent trilogy, will be split into two films, the last of which will be released in March of 2017.  I am experiencing a bit of cognitive dissonance regarding this announcement.  On one hand, more Theo James.  Also giving me hope is that perhaps the Summit folks finally read the book &, after recoiling in horror, realized they've got their work cut out for them & it will require two films to correct Roth's countless errors in the conclusion to her series.  On the other hand, Summit might stick closely to the novel when they write the script, in which case the only light at the end of this two-film-Allegiant-tunnel is, of course, Theo James.

Friday was eventful, at least for me, though I hope yours was fabulous as well.  I posted the final chapters of the book on Friday.  This may be of particular interest to a handful of people who've told me they were not going to read any of it until it was all posted (you are my people! - I would do the same thing).  So, it's all there now.  It will remain posted indefinitely, as the only reason I'd pull it is if someone shows an interest in publishing it . . . so like I said, indefinitely.


Late last Friday afternoon, I began the process of transitioning me & the kids from our pajamas into 'real' clothes so we could meet Trey & the four grandparents for dinner at Genusa's.  This isn't earth shattering, I realize, but it was an accomplishment for me.  I was tired Friday.  After the night he had last Thursday, I expected Henry to wake up with about ten teeth Friday morning.  Despite too little sleep that was interrupted too many times to count, I drug myself out of bed Friday morning because, you know, insulin doesn't inject itself, & diapers do have a urine capacity, & the odds of one of my kids bringing me coffee in bed are extremely slim.  I did my morning chores, forged ahead & posted the final chapters of the book, did most of what needed to be done around the house (basic sanitary stuff, no deep cleaning), split time between the kids & the four cups of coffee the day required, & had decided the kids & I would stay in Friday night, & if we were lucky, Trey (or a set of grandparents) would bring us some take-out.  However, Reagan was in a great mood & wanting to get out of the house, so I dressed us all up, packed the three required bags that accompany us wherever we go, buckled us all in, & happily played Reagan's song requests on the way to dinner.  Truth be told, while I did change out of my pajamas, I didn't wear hardly a lick of make-up; I was banking heavily on the dim lighting in Genusa's.

I saved the first day of last week for last (isn't that a fun sentence?).  On Sunday, April 6, Henry rolled over into double digits & hit the ten month mark.  Here are the results from photo shoot No.1: 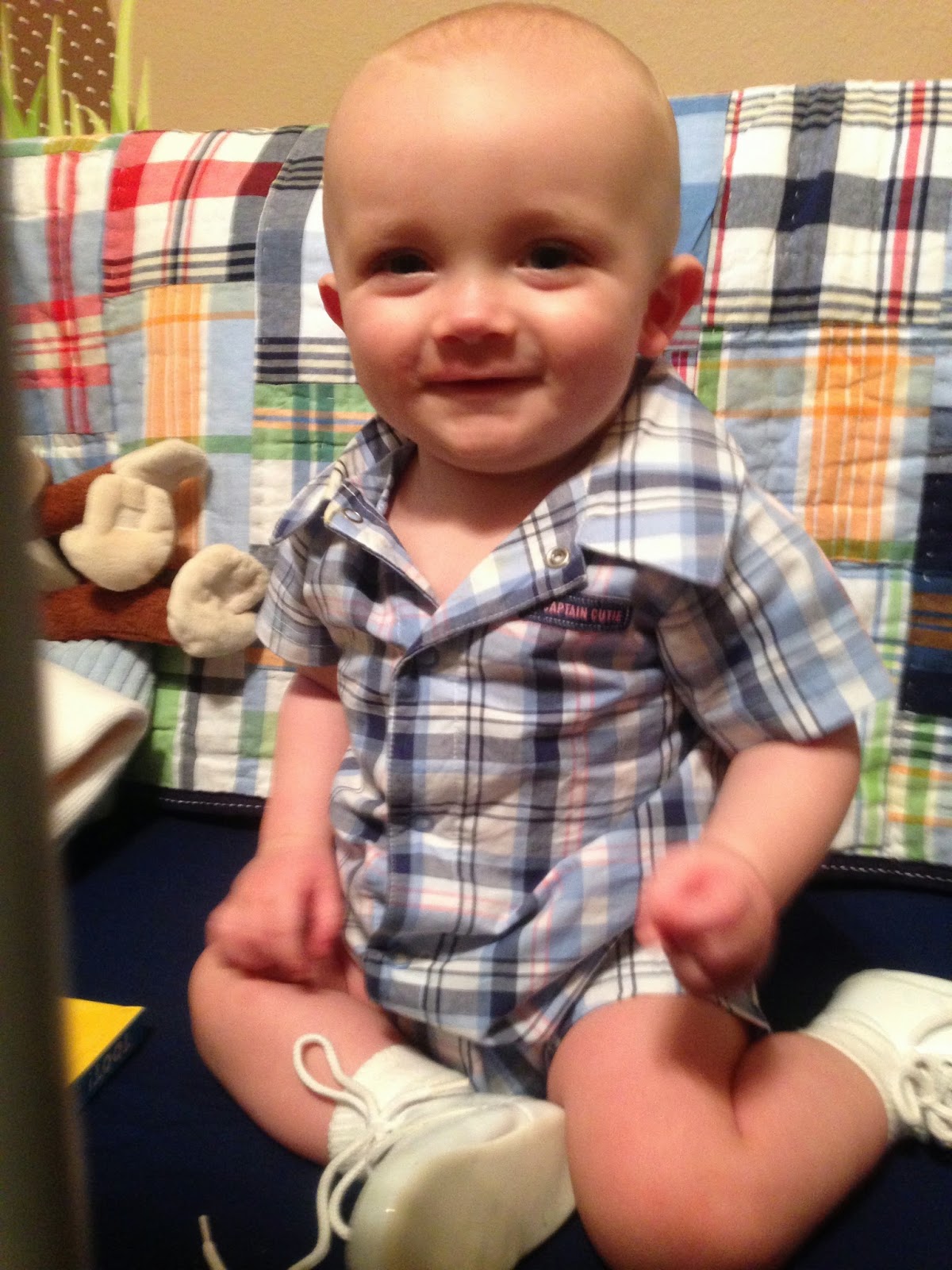 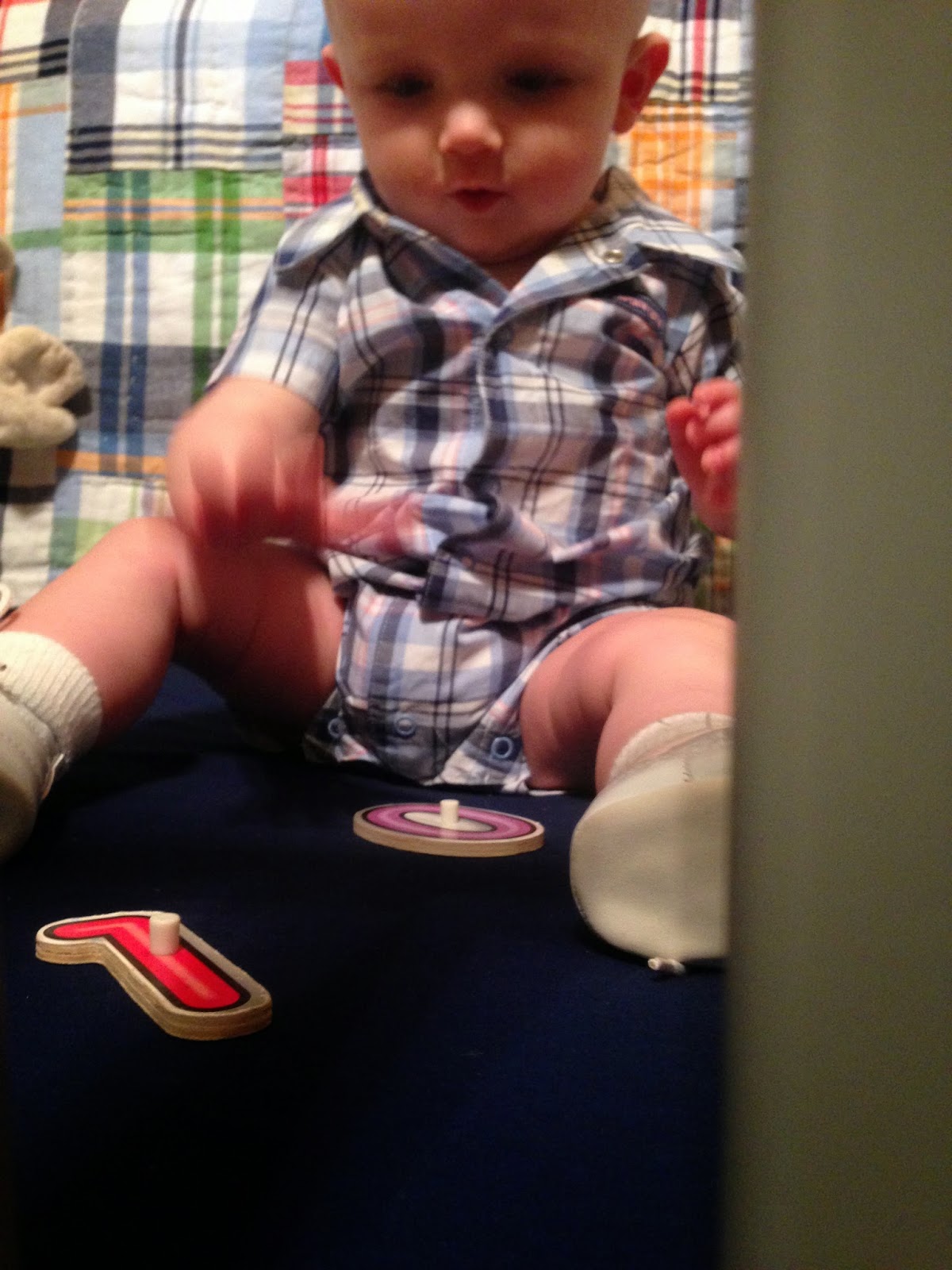 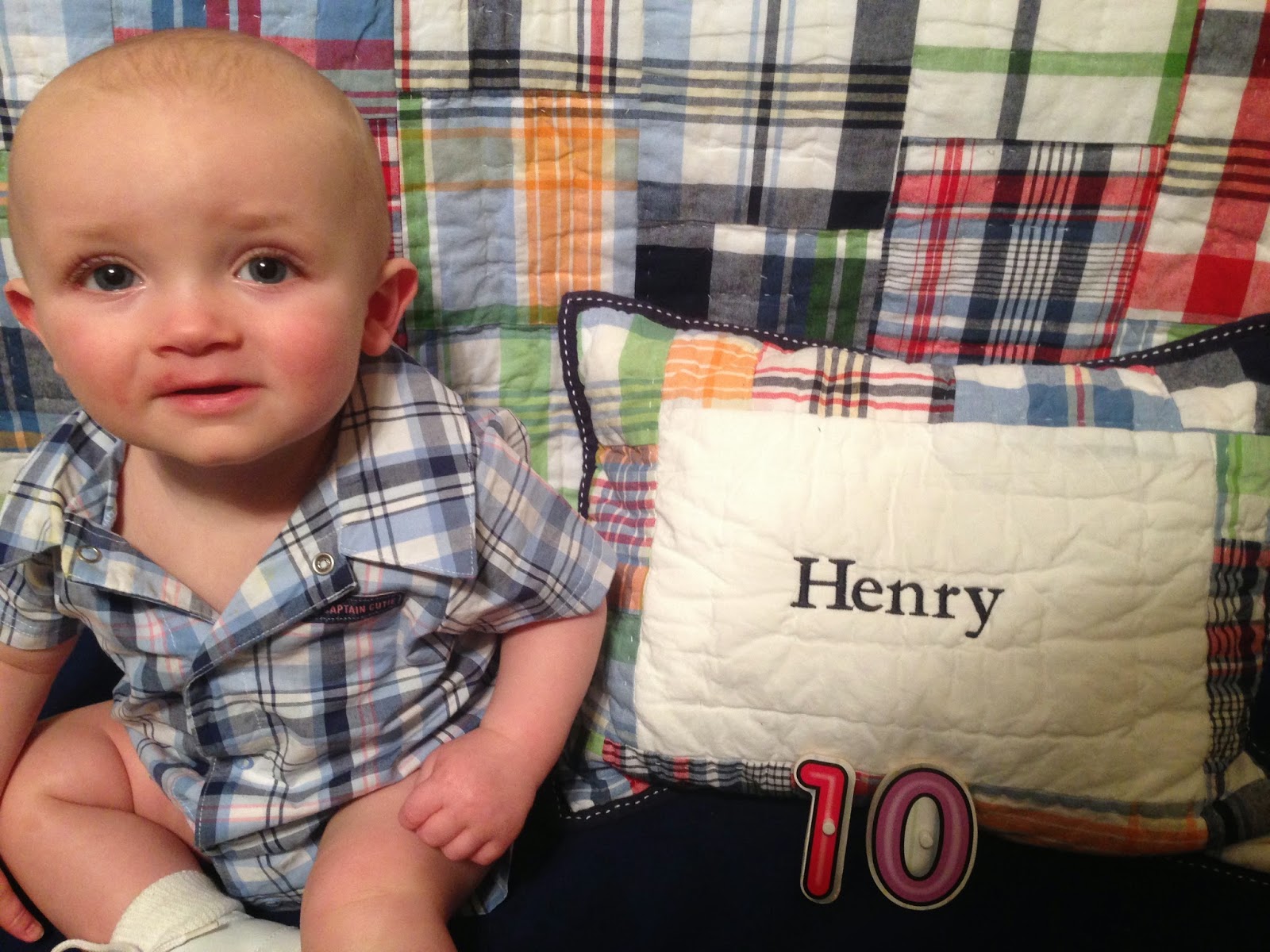 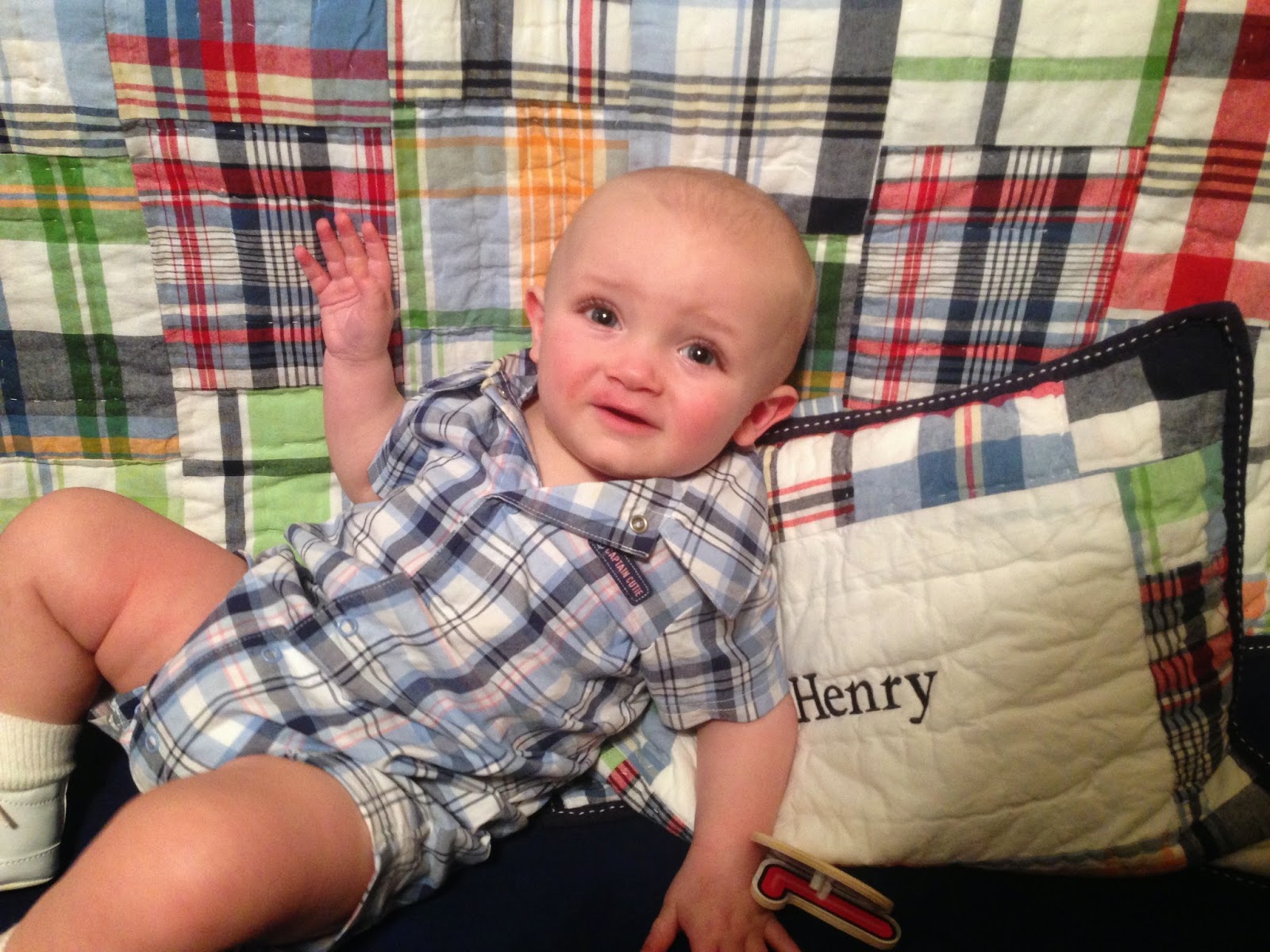 And photo shoot No.2, which yielded marginally better results: 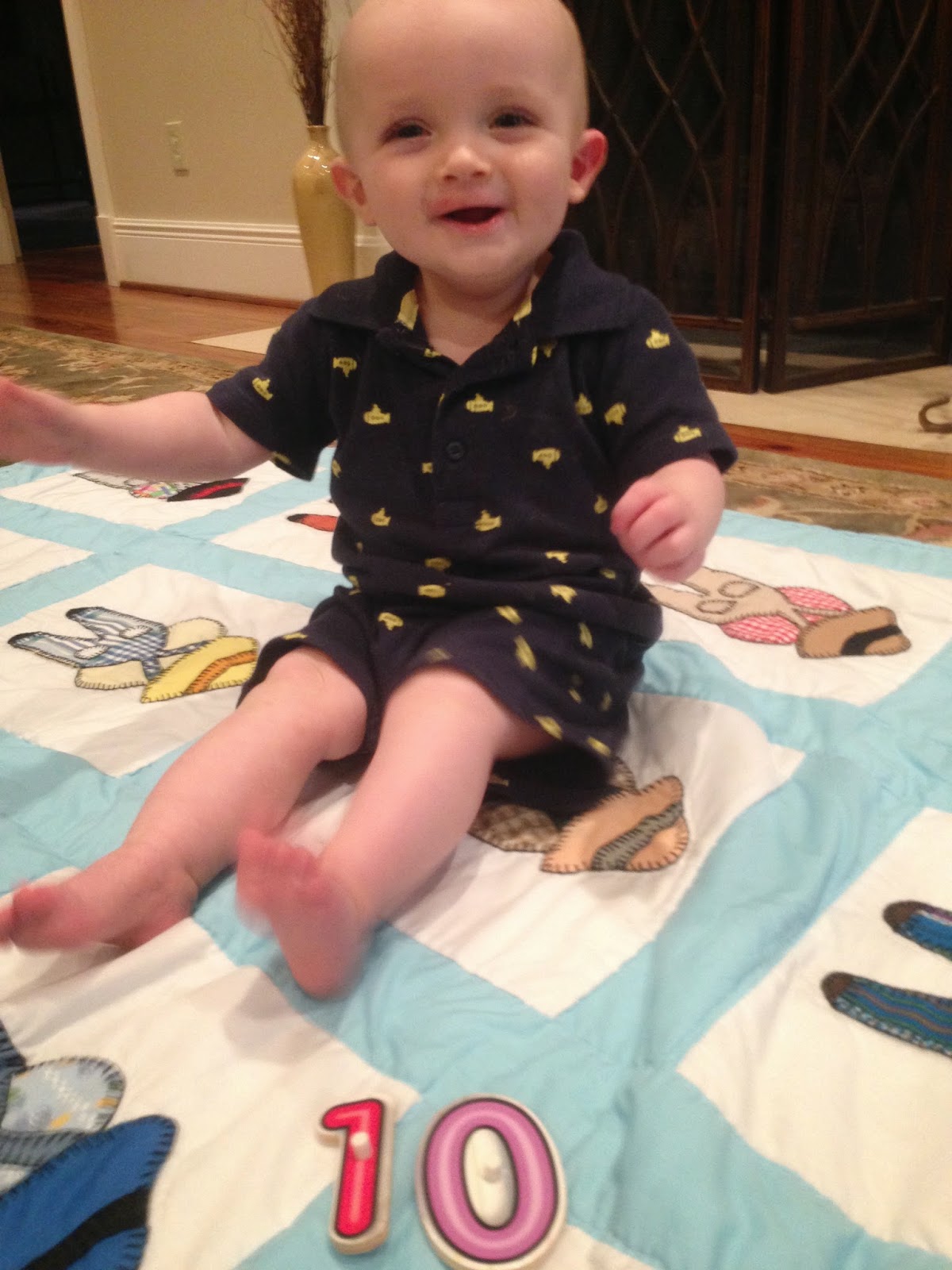 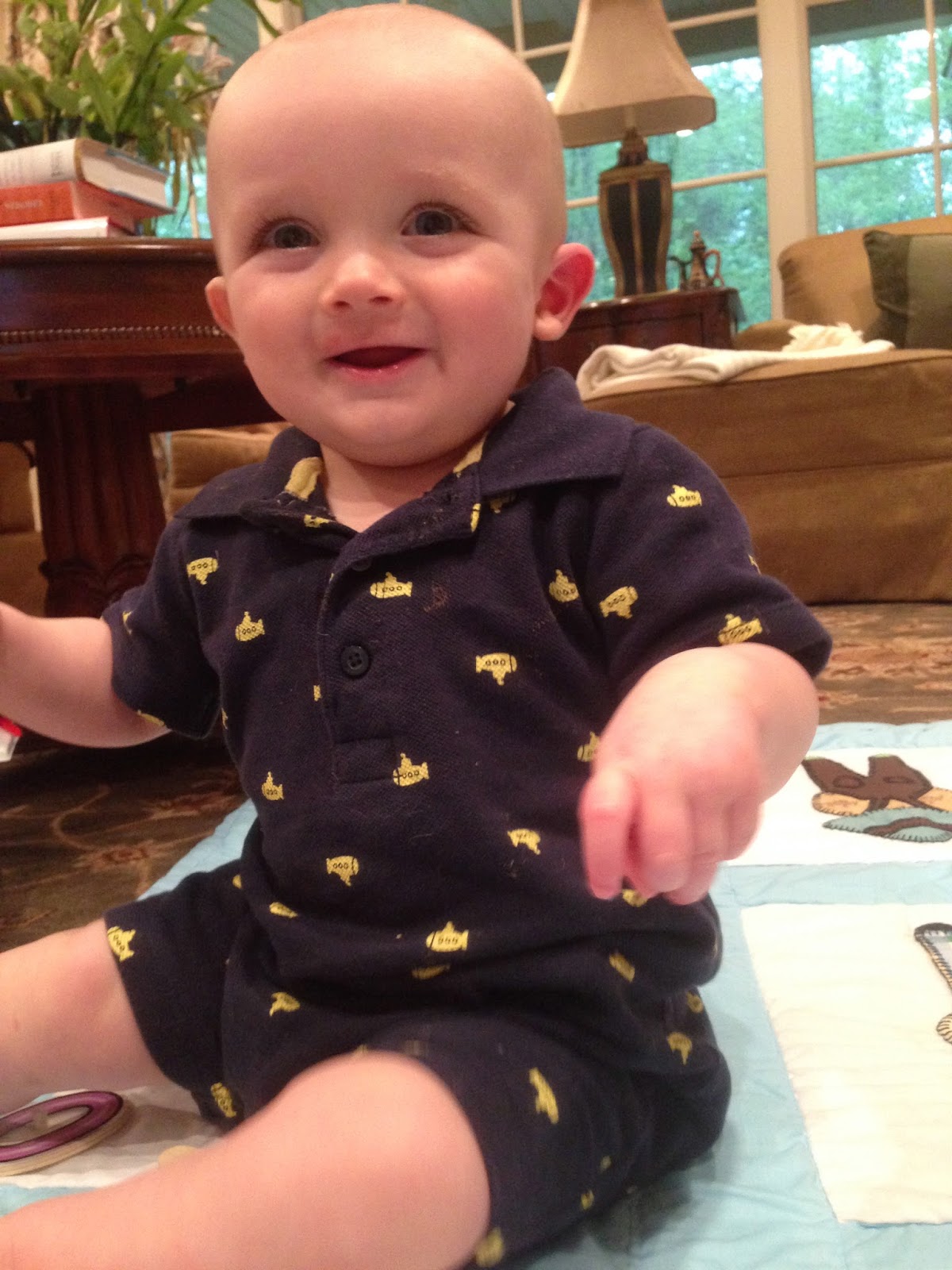 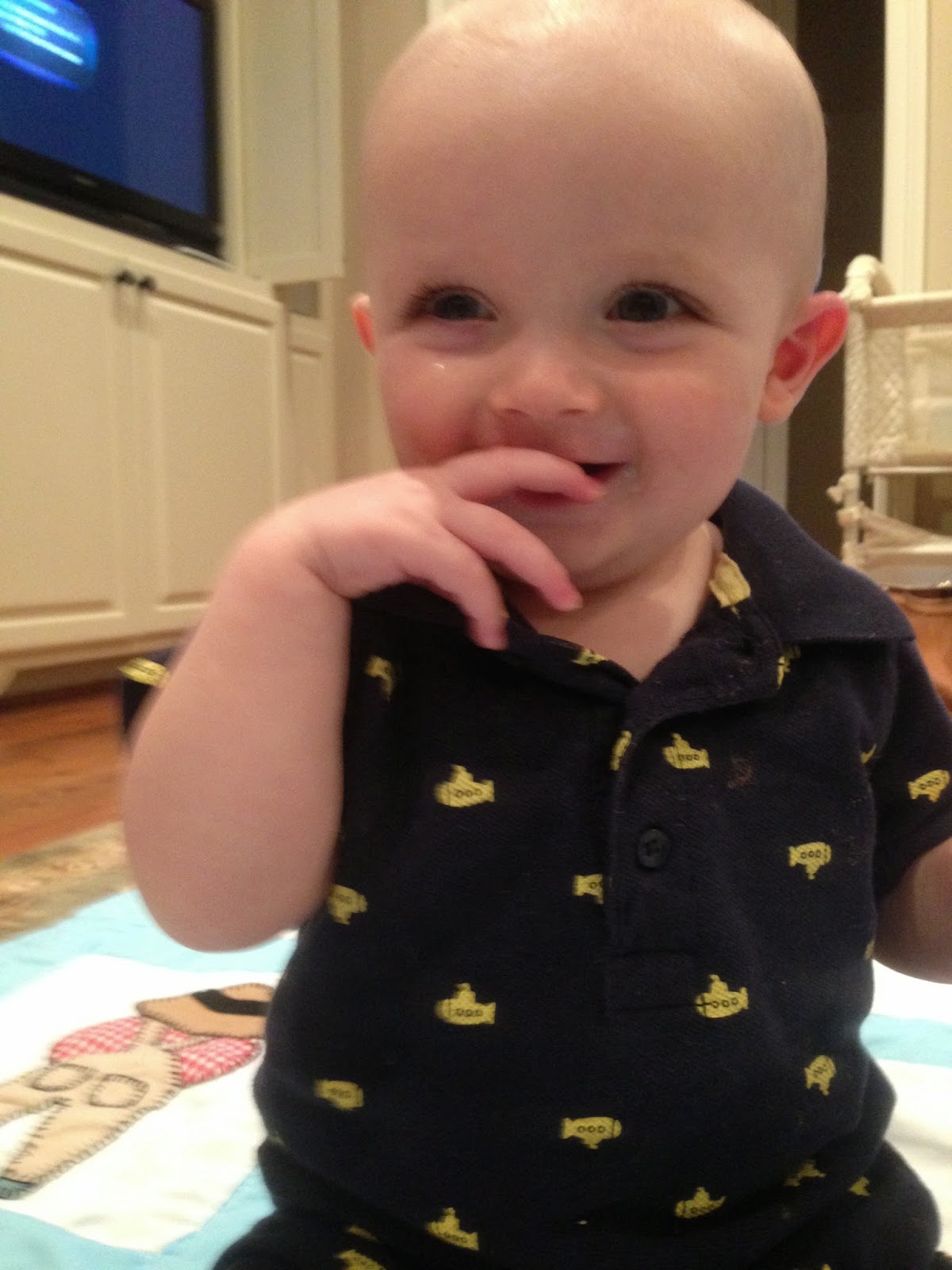 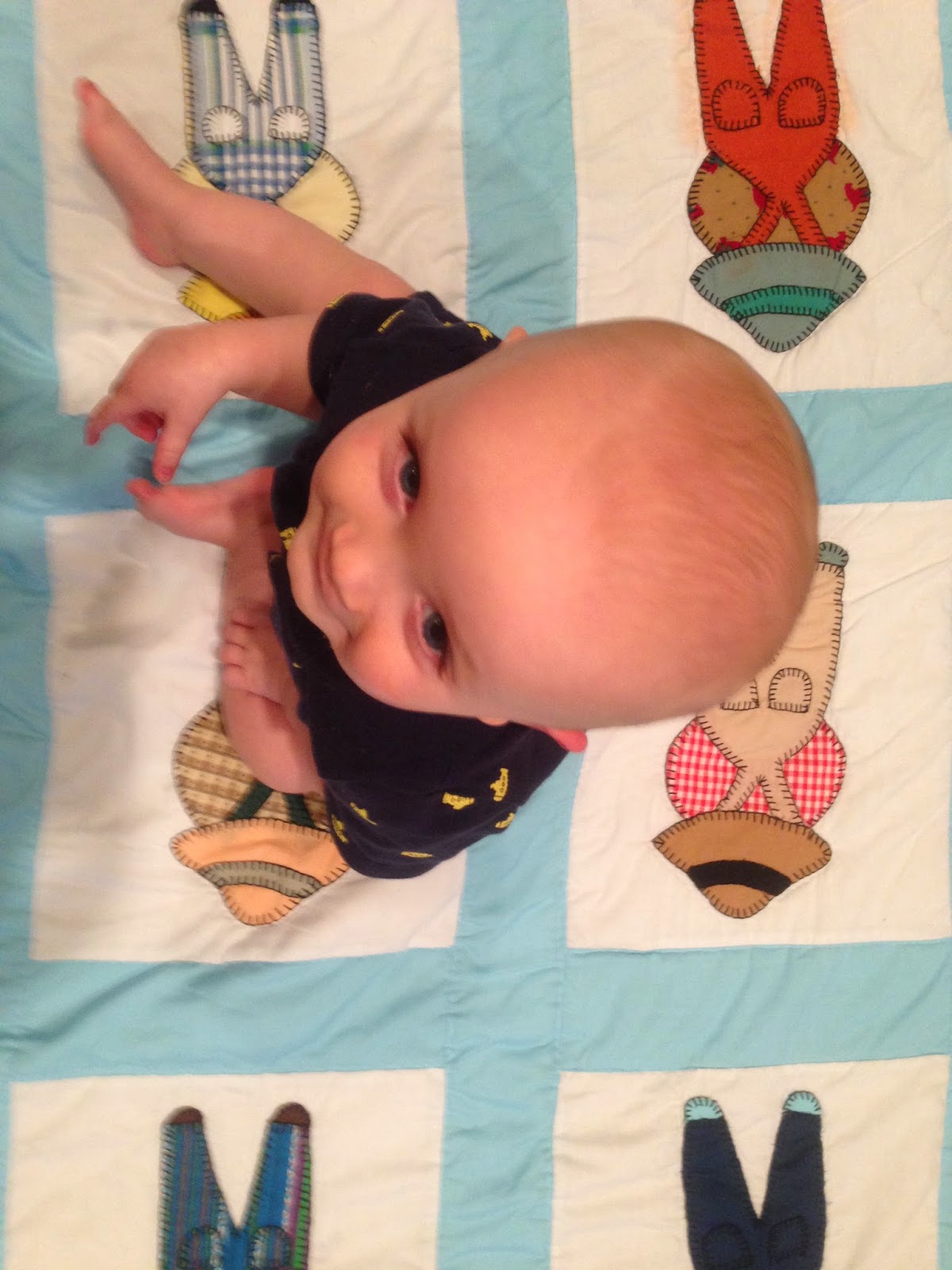 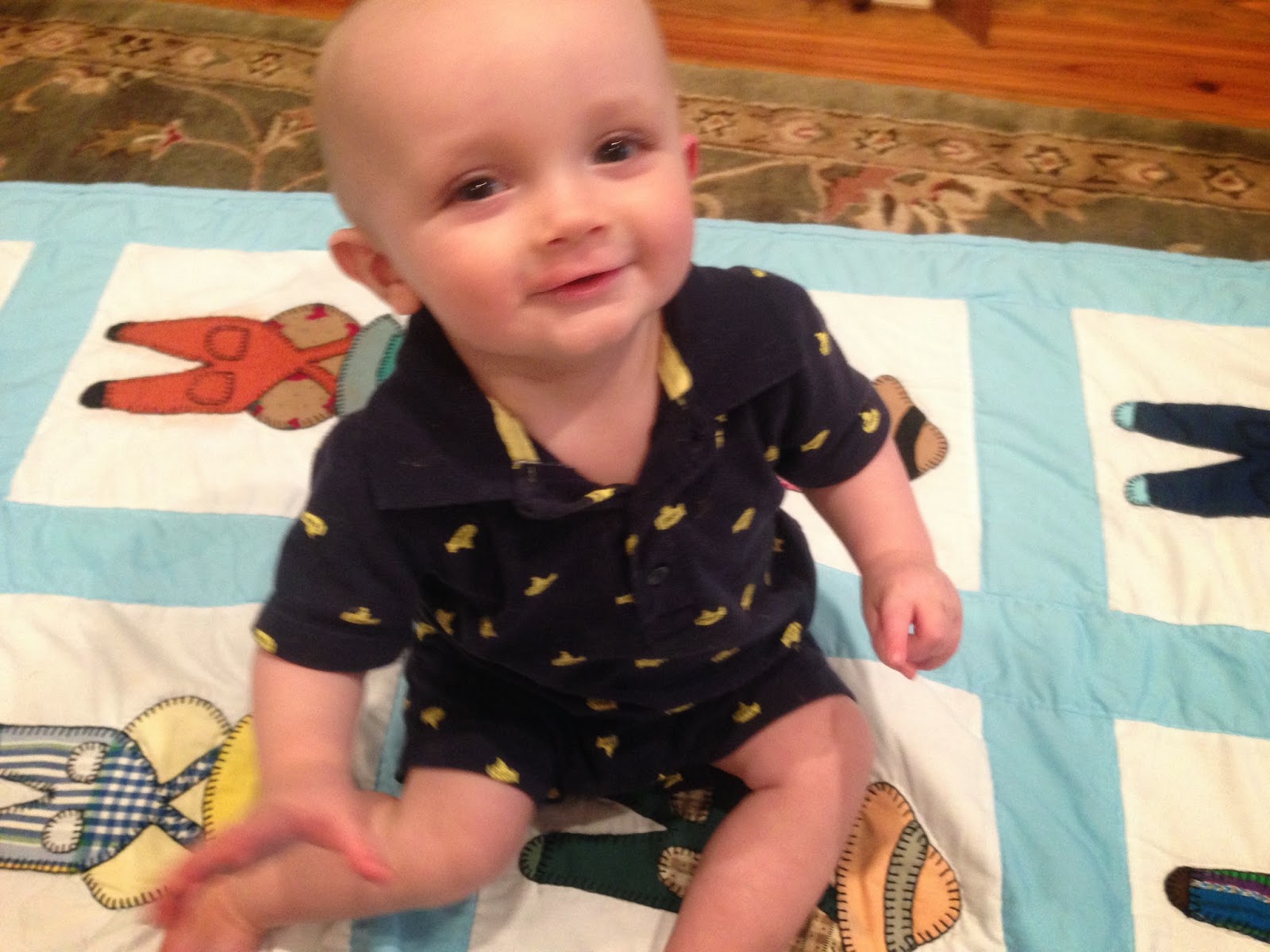 Finally, I've made a few personal strides I'd like to share.  Last week, I only ate Raisin Bran in bed late at night three times.  That means there were four nights I shunned the calorie-laden sugary raisiny goodness.  I can feel the fat melting away.  I've also given up Days of Our Lives.  Cold turkey.  The DVR still records it, but I haven't watched an episode in two weeks.  It takes forty minutes to watch an episode on the DVR (I can fast-forward all the commercials).  I just decided I want those forty minutes back.  I read a little more, I write a little more, & I am not at all stressed out about whether or not Abby is pregnant with EJ's baby (I totally think she's not . . . even though he seems to impregnate the women in Salem just by looking at them).  Either way though, I do not care.

I'd like to attempt a sequel to the book, & I was thinking & whining to myself (in my head . . . I try not to whine out loud (much) because we're trying to get Reagan to nix the whining) about how little time I have to sit & type.  It took me a year to write the first book, & I had one child then, & she had a functioning pancreas.  Now, three years (almost to the day) that I began Dear Miss Moreau, I am plus one child, & minus one functioning pancreas, & so I've no idea if I will ever write a second book (without child services becoming involved, that is).  I decided that one way I could carve out a little more time to write, or at least decompress enough to think about what I'd like to write, is to quit watching Days of Our Lives, & so I have.  Even if I don't write during those forty minutes, I can read, & if there is one thing that helps my writing, it is reading.  Reading is good for my writing, & necessary for my sanity, so it's a win-win.

One night last week when I was not watching that day's episode of Days of Our Lives (& not eating Raisin Bran in bed!) I opened a brand new word document.  The white void of a page was completely intimidating; remembering the process of watching nothing slowly evolve into thirty chapters, 97,000 plus words, made me want to pick up my remote & return to the mindless drama of Salem . . . but I didn't (see, strides!).   So here's a snippet of what I typed:

***  This is a spoiler alert for anyone who hasn't finished reading the book, but intends to do so ***

Edie felt small and young on the couch, tracing the outline of the imposing tree with her eyes now that they had fully adjusted to the darkened house.  Over a decade had passed since she last slept on the couch in her parents’ living room beneath a Christmas tree.  She smiled as she remembered her attempts to catch Santa, which were always thwarted by her father’s strong arms scooping her up, her body heavy with sleep, and carrying her upstairs to deposit her in her bed.

She was craving another pair of arms now.  Despite the blanket of familiar warmth that had cocooned her since her return to Louisiana, and the army of family and friends holding vigil to meet her every need during her convalescence, no one and nothing in the Bayou State could soothe the ache that commenced the day she boarded a plane, dragging her fractured left leg and nursing a fragile heart, and left Dr. James Foster behind in Boulder, Colorado.

Those paragraphs are excerpts from chapter one of the unnamed sequel.  Don't hold your breath for a chapter two sneak peak.  What I keep telling myself (in my head, of course, in a non-whiny voice) is that the reasons I finished the first book are (1) I wanted to tell a story, & (2) I had no idea what writing a book entailed, so I just wrote when I could.  So, I am attempting to forget what I now know about the process of writing a book & focus on the telling a story part.  I fear I may be driven back to the Raisin Bran . . . but fortunately, while I can read & eat Raisin Bran, I cannot type & eat Raisin Bran, so the future's looking bright for both the sequel & my thighs.