In case you've been eagerly waiting to read it, I am working on a short narrative relaying the events surrounding Henry's birth.  Some of the details are rather harrowing, & between a reticence to revisit the pain & a lack of alone time with my MacBook, it's been slow going.  Stay tuned.


Annnyway, when I was in college the country music singer Toby Keith released a song titled "I Wanna Talk About Me."  It is a truly horrible song; the greatest thing about it was listening to a close college friend do his impression of it.  I've thought of the song lately in the moments when I have the time to form contemplative thoughts.  It's bizarre, the ways children change your life.  Do you know this man? 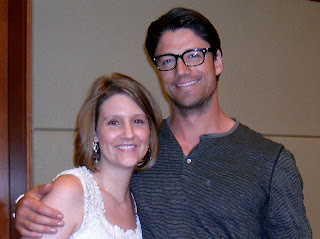 This is yours truly with Mr. James Scott, a British actor who has, since 2006, portrayed E.J. DiMera on the NBC soap opera Days of Our Lives.  I don't know if I've ever mentioned that I'm a Days watcher.  My interest in the show has waxed & waned over the years, but I am a fan of Mr. Scott (since, unlike most of his co-workers, he can actually act) & a fan of his on-air persona, the dastardly heir of the infamous Stefano DiMera.  Plus, he's kind of beautiful.  In early 2010, it came to my attention that several members of the Days cast would be in Dallas for a charity event &, since the above photo gives me away . . . yes, I went.  It wasn't that expensive & I decided I wanted to do something fun by myself before kids came along.    Obviously I met James Scott, as well as several other cast members, but I also had a lot of fun meeting other women & gay men who're fans of the show.  Additional fun was had singing in my car on the drive there & back.

If your opinion of me has plummeted after reading about my weekend with the stars, well, I can live with that.

The idea of driving to Dallas, alone, & spending a weekend with soap opera stars & fellow soap opera fans is completely foreign to me now.  I don't do anything alone now.  I usually have an audience when I pee, & when I shower.  Seriously.  Not only do I not do anything alone, anything I do outside our home requires a week's worth of planning & coordinating schedules.  Next week, I have an appointment with my OB on Monday, followed by a much needed appointment to have my hair cut on Tuesday.  What this means is that I have to figure out who keeps whom.  If you have kids, you don't simply go to the doctor (especially when the average wait time for your OB runs @ 3 hours), or run get a hair cut. Reagan is fine to hang with one of her grandmothers, however little Henry remains a more complicated matter since he's nursing.  I don't know if I am quite ready to give him a bottle yet.  I think he'd take it like a champ, but I am hesitant to blow a few ounces of the milk I've been pumping so I can get my hair cut.  I need a stockpile for when I start teaching again in about a month.  One of my greatest fears at the moment is a power outage that would render our freezer useless, leaving me frantically searching for a place to store the milk I've pumped.

On a completely unrelated note, I've opted not to have my hair colored . . . yet.  I quit highlighting it while pregnant, & now I can't decide if I want highlights, or to darken it some.  I'm not rushing to decide as I suspect I am still under the influence of pregnancy hormones.

So, as I figure out how I'll manage next week's appointments, I'm a tad nostalgic for the time when I could pack my bags (just my bags, not what's required for three people), hop in my car, & drive to Dallas to do something completely frivolous, reminding Trey to feed the dog on my way out the door.  I know, I know, in a few years I will bemoan my kid's advancing age & remember fondly the time when a day was considered "good" because I was able to wash my hair.  I know to savor the little moments now, even if I am covered in urine when they occur & it's been a few days since I washed my hair.  I am making a conscious effort to slow down during the day & enjoy all this time with my babies while they are home &, with few exceptions, we don't have to go anywhere & can stay in our pajamas all day.  I admit, I do sometimes daydream of driving alone & listening to something that hasn't been featured in a Disney film, but I know that I will one day reclaim my independence - in the shower, on the toilet, & in my car.

I was looking through old pictures of myself to find one I want to show my hairdresser next week, & when I saw the above photo, I paused for a moment.  I am, in so many ways, a completely different person than the twenty-nine year old smiling next to James Scott.  Your kids change everything.  There's the obvious - the physical changes, the jump in health insurance & grocery bills, etc., but, at least for a mother, the change is transformational.  When they are small, you are absorbed in their little worlds.  Right now, if asked what my favorite TV show is, I would, without hesitation, say, "Daniel Tiger's Neighborhood."  Last week I was driving to pick Reagan up at my parents' house & excitedly pointed out a school bus on the road before realizing only Henry was in the car with me.  Things you thought were incredibly important before you had kids (like meeting soap opera stars & always wearing make-up in public) are shoved aside & forgotten, maybe temporarily, maybe permanently.  I know they will grow & need me less, & this both saddens & excites me, honestly.  Since Henry's birth, I've realized how much Reagan can already do for herself.  I didn't even realize it until Henry, who is totally helpless, was placed in my arms.

Over the past year or so, I've been blessed to get to know a wonderful woman from church.  She has three young children, all under the age of four, & she is as fanatical about book club as I am, so we have a lot in common (she also does yoga & speaks fluent Spanish, so we're not exactly twins) .  More than once, she's referred to the "season of life" in which we find ourselves.  She's as bothered as I am by toys strewn all over the house, but once said, "it's just part of this season of our lives."  I love her use of this phrase & think of it often.  One day, I will buy two reading chairs to fill the space in my kitchen currently occupied by Reagan's child size table & a mountain of toys.  I walk by this space about fifty times a day, & often envision my future reading nook.  At some point in the future, when my kids demand much less of me than they currently do, I hope to spend a great deal of time sitting there reading & writing.  While this thought relaxes me now during a hectic, shower-less day, I know I will miss the pile of toys I so loathe at times now.

This season is not about me.  It's just not, & sometimes I have to remind myself of that.  What I have realized, perhaps a bit late in my Christian walk, is that no season is about me.  I think what has clarified this for me, more than anything else, is watching my mother & my mother-in-law run themselves ragged taking care of my children & their own parents.  Reagan & Henry, whether it's your own children, your parents, an elderly neighbor, or a friend in need, gravitate to those who need you - your time, your attention, your love, your patience - & give it to them in spades, even when it is hard to do so.  I'm not suggesting you forgo bathing & forsake any personal interests, but always consciously resist the allure of focusing too much on yourself.  I will, of course, reread this multiple times in the future to remind myself of this.