This post is a little difficult to begin, given that my last post centered on my epiphany that everything isn't about me . . . because now I'm going to proceed to go through a laundry list of awesome things that have happened . . . to me . . . since I last blogged.  However, my good spirits are of great benefit to those around me, so there you go.

Last year when I told Trey I was pregnant, the conversation went something like this: "I'm pregnant . . . I need a new car."  I'm paraphrasing a little (but not much).  Roughly six years ago when I was a single working gal, I bought myself a Honda Civic.  It's been a great car, but once that second child seat was added, the walls of the Civic began to close in on me.  It wasn't built with two small kids who require large car seats & a monstrous double stroller in mind.  Even before I knew I was pregnant, my search for a mom car began.  The one stipulation I was given was that we would not buy a GM vehicle, new or used, because of their shameful acceptance of taxpayer $.  Trey claims he suggested a Toyota Highlander, & since I've had such a great week & he just wrote a fat check, I'll concede that point despite having no memory of any such suggestion.  However it happened, I decided I wanted a Toyota Highlander.  We agreed we wanted a used one, because truly if I had all the money in the world, I might still buy used cars.  Reagan & Henry, let someone else take the depreciation hit that marks a vehicle the moment it's driven off the car lot.  It's not a piece of real estate that potentially will increase in value over time, & given that its purpose is to hurl you down the road, sometimes at high speeds, alongside others engaged in the same activity, often recklessly, there's rarely a reason to buy a brand spanking new car.  *Lesson concluded.* 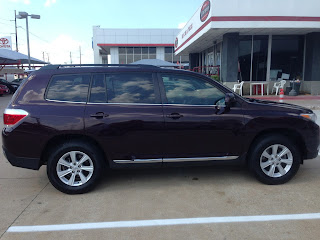 I don't know the "official" Toyota name of the color.  In our garage, it has a deep red tint, but in the sunlight it looks more purpleish.  I call it Eggplant.  Anyway, it's wonderful & much larger than a Civic & it's been pleasurable hauling my kids around in it these past few days.  I'm happy, & while I bet it hurt to write that check, I know Trey is pleased that my car whining has come to an end.

On Sunday the four of us took our first family ride in the new car.  My intent was to have my mom take a pic of the four of us in front of the car, but photo ops never go as planned when small kids are involved, so I settled for the one below, taken right after lunch.  It's the first pic of the four of us together.  Shameful, I know, given that Henry is almost two months old.  What is worse is that I appear to be about five months pregnant, but since I love my family, I'll set aside my vanity & post the picture: 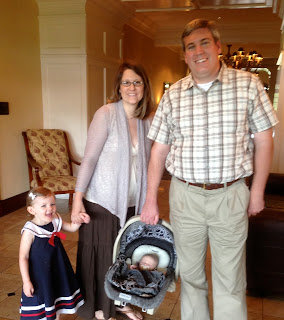 Monday I made it to my final Henry-related doctor appointment.  I should say my mother, Henry, & I made it to the appointment.  My mom, saint that she is, is currently serving as my nurse maid, accompanying me to my various appointments so that I can nurse Henry when needed.  The wait wasn't that bad (which means we were there 2 hours, as opposed to the usual 3-4), & my doc & I had a productive conversation about various ways to ensure I never again utter the words, "Trey, I'm pregnant."  She cheerily concluded the appointment by telling me I could exercise all I wanted, which is totally what the mother of a seven week old infant is waiting to hear.

Tuesday, I had about three inches of my hair chopped off.  I let things get completely out of control toward the end of my pregnancy & during the first weeks of Henry's life.  Further compounding the issue is that when pregnant, most women cease to shed hair, & if you nurse, this continues.  I've no idea why, but regardless of the reason for my body's hair hoarding, it adds considerable time to the already lengthy time it takes me to dry my hair.  I inherited my father's thick hair (which, during his high school & college years could accurately have been described using the term 'fro), & I benefit greatly from the shedding of the typical handful of hair I exit the shower with daily.  For real.  So, Paige, the woman who's cut my hair since I was around twelve, cut several inches off & gave me some layers in an attempt to thin things out.  This paragraph may be boring you to tears, but having several inches of hair lopped off during July in Louisiana is such a wonderful feeling, I thought it deserved at least a mention.  I just realized I do not have a picture of the new hair, & I'm not going to attempt to take one of myself, so that'll have to wait.  After all, I've got to keep my readers on the hook.


The excitement of the doctor visit & the new haircut wore Henry out apparently, because Tuesday night he pulled his first five hour stretch.  He slept from midnight until 5am.  For the first time in almost two months, I slept more than four consecutive hours.  That alone is enough to earn this week the title "Best. Week. EVER."

The awesomeness continued yesterday.  If you recall, my father-in-law (who'll be referred to as my FIL for the remainder of this paragraph) lost his father in February of this year.  I realize this is not awesome . . . but I'm getting to that part.  My FIL & his brother are preparing their father's house to put on the market, & have hired a painter.  In addition to bugging Trey about a car, I've also dropped a few hints about wanting to paint our master bath & kitchen.  Since changing the color of walls in our home is at the bottom of Trey's list of "things on which I want to spend my money," no real progress has been made toward this end since we moved in over a year ago.  That's a long time for a woman to look at bathroom walls that make her angry, so I took some initiative & contacted the painter my FIL hired.  Those of you who know my FIL know that he accepts nothing but excellence, be it from a painter or a waiter, so I figured if this guy is good enough for him, he's good enough for me.  If you've dealt with a painter in the past, you know that this can be a lengthy, often frustrating process (no offense to any organized painters who immediately respond to calls & always show when promised).  So, yesterday I called the man & was pleasantly surprised when he said he could come by last night to give us an estimate.  The pleasantness continued when his estimate was much, much lower than Trey'd anticipated, & then, THEN, he said he could come Sunday morning & would have both rooms painted that day.  If all goes as planned, this Sunday will indeed be a fine Lord's Day.


Since I was given the go-ahead to exercise, I've been strategizing about how exactly to make that happen.  There is the option of loading both kids in the double stroller.  The flaw in that plan is that Reagan sleeps until around ten, & by that point it's incredibly hot outside.  I'm also unsure of how ready I am to push forty pounds of my offspring while I walk.  So, right now my best option is walking early, while Trey is getting ready for work & Reagan is still sleeping.  I had all this worked out in my head Monday, but today was the first day I actually donned my tennis shoes & loaded Henry up.  Please understand that I am not, NOT, a morning person.  My peak hours begin about 10pm & end around 2am, but, as has been mentioned, children change your life in ways that were once unimaginable.  So today, I cheerily left my house at 7am to take a walk with my son.  The sun was peaking through tall pines that line the golf course, & two bunny rabbits scampered away as I emerged from our garage.  Seriously, it was a like Disney movie.  I quickly realized that no one plays golf at seven in the morning, so Henry & I had the cart paths all to ourselves. 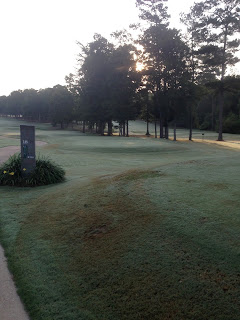 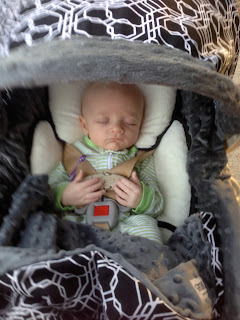 In addition to cart paths that are free & clear of flying golf balls, another perk of my morning exercising is that while Henry sleeps in his stroller, I listen to my iPod, & I listen to whatever I want, which may or may not include gems like Paula Abdul's "Straight Up," Whitney Houston's "I Wanna Dance with Somebody," & Cher's "If I Could Turn Back Time."  I have a friend who has four young children, & every now & then I receive a text from her early in the morning.  As in 5:45 early.  Of course, I always think someone has died, & then am relieved when I roll over in bed & see it's just a text from her.  I've asked her before why in the world she's always up so early, & she explained that it's when she spends time alone.  You won't catch me strolling the cart paths at 5:45, but I finally understand now why she's up planning & texting in the wee hours of the morning.  Oh & also, when you get yourself & your infant up & out the door to exercise at 7am, it makes you think twice before plunging that spoon into the Nutella jar.

In the future, when I sit down to begin a post titled, "Worst. Week. EVER.," I'll return to this & revisit the many victories of these past few days.  As I cruise in my mom car & giddily await the painter's arrival Sunday morning, I am reminded of the words of Lady Thatcher:

I am extraordinarily patient, provided I get my own way in the end.