Meanwhile . . . back at the ranch I had just started writing this blog & had been bitten by the writing bug.  Hard.  There was a great deal of rumbling in my mind, but I was teaching & mothering a 6 month old & cleaning a disgusting oven, so nothing made it further than my mind for awhile.  At last, the spring semester ended, I eventually scrubbed the last flake of gunk off the oven's interior (with instructions to Trey not to touch it until we'd sold the house), & I watched as the skin on my hand tried mightily to heal itself.  It was a bad cut, & while it didn't leave the scar I'd expected, it did leave a mark, of sorts.  These, at present, are the opening lines of the book I've written:

Edie looked at the scratch on the back of her left hand.  It was red and angry and stung a little as the hot water cascaded over it.  The oven had won round one, but she would be back; she was determined it would shine.


No, it's not a novel about a thirty-something woman sprucing up her house; these lines conclude the autobiographical portion of the book.  I don't know what to do with it now that it's done.  I say 'done,' though there are portions I'm not thrilled with & fiddle with when the mood strikes.  I began writing it as I initially did this blog, with the assumption that my mom & I, & maybe one day my kids, would comprise my readership.  I've been spending a fair amount of time researching literary agents lately. It's a huge no-no to even think about contacting a publisher.  That's apparently rule No. 1 in the publishing industry.  Rule No. 2 seems to be that in a bad economy, agents aren't always eager to try & sell the work of an unpublished author to a publishing house.  On the upside, there's no shortage of agents out there, & finding them is pretty simple thanks to the Internet.  The trick is to compile a list of agents currently accepting submissions & whose interests seem to somewhat align with what you've written.  Many agents explicitly state that while they are accepting submissions, they're super incredibly busy with their current roster of clients, & I can't blame them for that since their established clients' work is what pays their bills.  It's free to submit your work to an agent, & even if they love, love, love it, they then have to sell it to a publisher before anyone sees any money.  When I say submit  'your work,' what most ask for is the first chapter, for a work of fiction.  Some initially want only a query letter (a brief summary of what you've written), which I am finding harder to compose than the book itself.  I don't do brevity.  Honestly, if I were single & free as a bird, I'd be looking into becoming a literary agent.  A great many of them hold English degrees & are easily excited by the written word & seem pretty obsessive about books they love.  Yeah.  If nothing else, I've learned a lot about the publishing industry & the lengthy process that occurs before a book lands on a shelf at Barnes & Noble, & it's been fascinating.

I've no idea who reads this blog, other than my mom & the few kind folks at church who comment on Reagan's photos or tell me they loved my most recent political rant.  If you're reading, & you know someone who knows someone at a literary agency, do a pregnant woman a favor & introduce us.  Apparently rule No. 3 is that a recommendation bumps you to the top of the submissions pile.

On the homefront, my belly is growing by leaps & bounds, serving as a constant reminder to me to get off the couch & get busy doing things I continually put off . . . like boxing up Reagan's old clothes, cleaning out baby boy's room (that's right, still no official name), & finding a few interesting agents to email.

Reagan is busy as ever.  She's either getting faster, or I'm getting slower.  Aunt Jessica was in town last week to house/dog sit for our parents, & Reagan & I spent Wednesday on the town with her.  Reagan now assumes that any trip to town includes a ride on the merry-go-round at the mall: 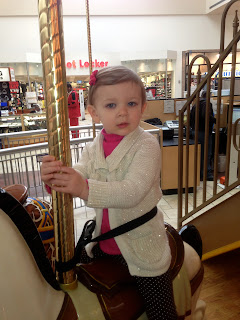 Which is followed by a drive in the pink ice cream truck: 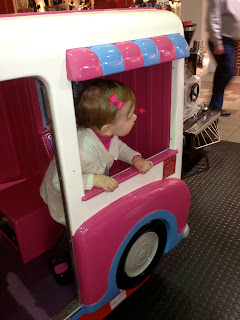 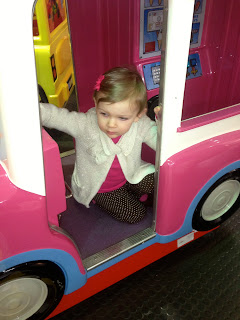 The three of us then headed to Kohl's, where I bought baby boy a few things . . . I got several cute 3 months outfits, hoping that with adorable things to dress him in, I might attempt to leave the house with both kids by the time he's 3 months old. 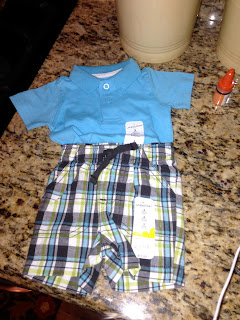 In lieu of a Toyota Highlander, my mom car of choice, Trey came home with this on Valentine's Day: 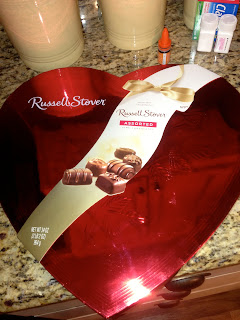 By Saturday afternoon, I'd eaten about half of it (with Reagan's help) before the blaze in my chest reminded me that chocolate can cause heartburn.  Apparently, the quality of the chocolate is directly related to the severity of the heartburn, & Russell Stover makes some good chocolate.  I let Trey, Reagan, & my mom finish off the uneaten pieces. 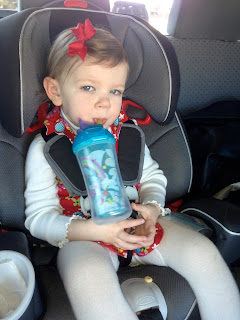 Ready for bed in her new Ariel shirt: 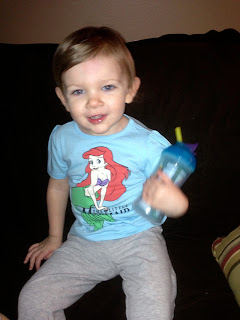 On her trip to ToysRUs with her daddy while I was in deep discussion with my book club at Olive Garden: 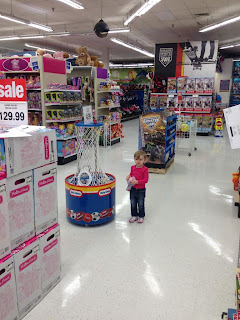 Her finds . . . wouldn't you think her collection's complete? 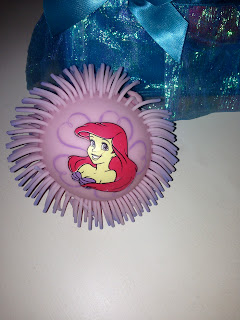 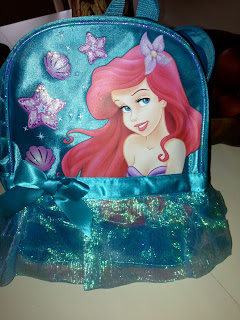 In the mid-nineties, Richard Dreyfuss made a movie titled Mr. Holland's Opus.  It's a good film in which Dreyfuss portrays the title character, a high school music teacher who dreams of composing classical music that will bring him fame, perhaps riches.  Originally considered a temporary job, at the film's conclusion an aged Mr. Holland finds himself retiring from decades of teaching high school students music.  The final scenes are an emotional farewell to Mr. Holland during which scores of his former students return to their alma mater to pay tribute to their beloved music teacher, a high school teacher unknown outside his small town who is being forced into retirement by budget cuts.  Before handing Mr. Holland his baton one final time, a former student explains to him, & a packed auditorium, "We are  the melodies and the notes of your opus.  We are the music of your life."

*Don't worry . . . I am not relaying all this to tell you we're considering naming the baby Opus.*

There are portions of my book that I don't love; there are whispers of a sequel in the recesses of my mind, places only accessed when the house is dark & quiet, but these are unlikely to find a home on my laptop anytime soon.  I almost fear a positive response from an agent, because then I'll reveal to the kind individual willing to take a chance on my work that I have two small kids who aren't all that keen on mommy spending copious amounts of time editing a manuscript.  I've gained an immense respect for those who write for a living, because it's a time consuming job that many authors juggle while holding other jobs, & it requires considerable self-discipline.  I've also learned that nothing I write will ever be as beneficial to Reagan as my time.  Though the text is slowly taking shape, she is my masterpiece.  My kids are as pure, & as intimidating, as a blank page, & I'm determined to pen as much as possible before they begin making editorial decisions.

I hadn't written a thing in years until I began writing this blog a few months after Reagan's birth, which I felt compelled to do as I watched her grow & searched for an effective way to catalogue our ups & downs, moments that are, to borrow a line from an Aida song, ephemeral & fleeting. Fitting, I suppose, that my inspiration for writing is the reason I don't sit & write nearly as often as I feel the urge to do so.  It's the reason I chose the Thoreau quote that headlines this blog; I started blogging in an attempt to capture the intangible the best way I know how, with words.

To my kids, my masterpieces, volumes I & II: Let me suggest to you to determine what your measure of success is, & fix in your mind what a successful harvest looks like long before reaping time, so that you can prioritize along the journey.  I love you, & I pray that I always express that as completely with my actions as I do with my words.