I was blessed with nearly twenty-seven years with all four of my grandparents & logged many miles to & from Bastrop visiting them. Below, Jessica & I with our grandparents (note that two of them are holding coffee cups; it's in the genes!): 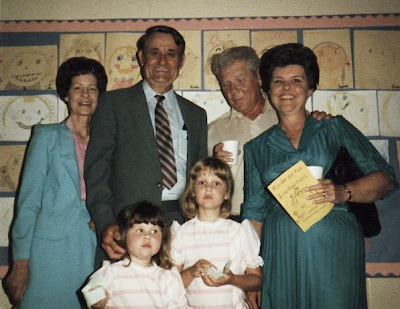 My paternal grandfather, Jesse James, Jr., passed away Wednesday, August 1, 2007. Yes, his name was Jesse James. His middle name was Arvin &—get this—his father, Jesse Arvin James, Sr., purposefully changed his middle name to Arvin (I know what you're thinking, from WHAT?, but sorry, I don't know). My dad had an older brother who survived only a few days, otherwise Gordon would be known as Jesse Arvin James, III (or maybe Trey! haha).


I am my paternal grandparents first grandchild, & Reagan is their first great grandchild. 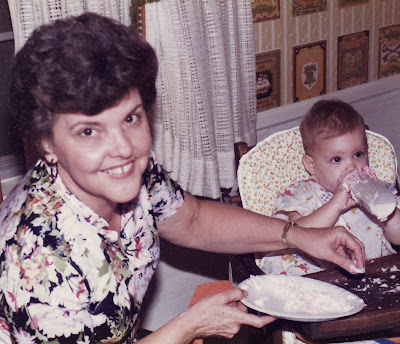 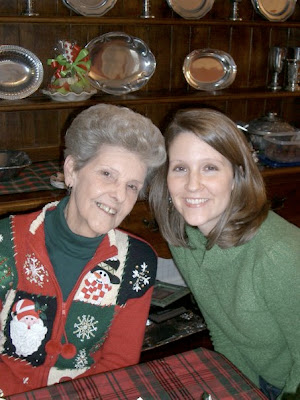 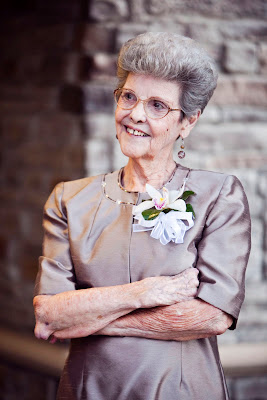 With her grandsons Erich & Adam: 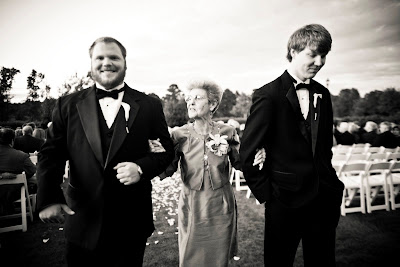 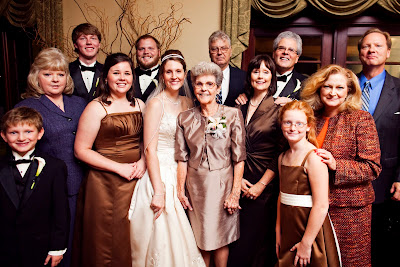 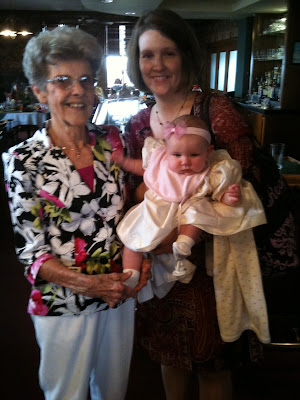 As their first grandchild, I had the privilege of naming my grandfather. I assume he took one look at me and knew I could come up with a name for him far better than the traditional 'Grandpa' or 'Papaw,' so at some point after I figured out 'Dada,' I, being brilliant even as a small child, took a great phonetic leap and named him 'Dadoo.' It stuck, & eventually there were six of us using Dadoo as part of our adult vocabulary as if it were something more than the garbled rambling of a two year old.

Mamaw & Dadoo fished; they fished a lot. Jessica & I didn't much care for fishing, but we were more than willing to fill our tackle boxes with food & stuff our faces while they fished, giving preferential treatment to anything made by Little Debbie. I also remember eating a lot of vienna sausages & thinking they were fantastic; this haunts me now & makes me wonder why some adult didn't intervene.

I likely took my first sip of coffee at Mamaw & Dadoo's kitchen table. They drank copious amounts of coffee. I suspected I wasn't supposed to have any coffee, it being the mysterious dark drink that fueled (fuels) my mother, so naturally I wanted it. Mamaw loaded it with so much milk & sugar that it was more like a milkshake than coffee, but I loved it & it went well with the pancakes floating in syrup they always made me & Jessica when we spent the night.


Believe it or not, I was a little bossy when I was younger. I thought the purpose of family gatherings was to provide me with enough pupils for my classroom so that I could "teach" them. Dadoo always acted up, speaking out of turn quite frequently, & thus he spent a great deal of time in the corner. The geniuses are always misfits in school.


Dadoo's mother was German, so in addition to my English degree & my endearing habit of correcting people's grammar, he's also probably responsible for my OCD tendencies & my lifelong dream of having zoning laws enacted in West Monroe, although it's probably about fifty years too late for that.

At my high school graduation: 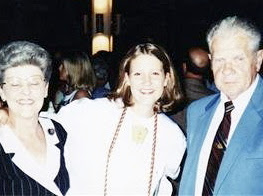 Dadoo often wrote letters to me & Jessica (& also to the editors of The News Star & the Bastrop Daily Enterprise). I have all the letters he sent me while I was away at college, but about a month ago, my mom opened an old book that was read to me & Jessica as children, & pressed between the pages was a letter he'd written to us on August 24, 1988. In the letter, Dadoo discusses at length an owl he had been observing while sitting on their back porch at dusk. He describes his first encounter with the bird, and then concludes with this:


I have seen him most evenings since then, when I remembered to go outside at dusk and watch for him. To me, it is fascinating to watch, and comforting, too, a form of permanence, because I love the outdoors and nature and I know that this will go on, owls hunting at dusk, long after I have gone on to Heaven.

I am sure that at seven years old, this passage meant nothing to me, assuming I read the letter in its entirety. Needless to say, its value has increased with the passage of time.

Prior to his death, he requested that someone read William Cullen Bryant's poem "Thanatopsis" to him. I volunteered. This is the last stanza of the poem:


So live, that when thy summons comes to join
The innumerable caravan which moves
To that mysterious realm where each shall take
His chamber in the silent halls of death,
Thou go not, like the quarry-slave at night,
Scourged by his dungeon; but, sustain'd and soothed
By an unfaltering trust, approach thy grave,
Like one who wraps the drapery of his couch
About him, and lies down to pleasant dreams.


He had a healthy understanding of life & death. He didn't want a gravesite; he donated his body to science. I last saw him resting in his bedroom, at peace, & I have to say I prefer it to funeral homes, caskets, & graveyards. Those are props we, the living, hold onto when a loved one dies because we like structure & formality, & there is nothing wrong with that, but the pomp & circumstance seemed impractical to Dadoo. He knew he was simply folding up his earthly tent, to borrow Paul's metaphor, & joining the innumerable caravan that awaits us all, barring the Lord's return.