My Reagan is eager to celebrate her first 4th.  She has a new outfit (complete w/matching bow) to debut on Monday.

This Harvard study  found that "July 4th parades energize only Republicans, turn kids into Republicans, and help to boost the GOP turnout of adults on election day."

The 3 key findings regarding those attending July 4th celebrations:

*When done before age 18, it increases the likelihood of a youth identifying as a Republican by at least 2%

Likely befuddling the Harvard researchers, "the political right has been more successful in appropriating American patriotism and its symbols during the 20th century."

The study also found that Democrats gain nothing from 4th of July parades, and suggests Democratic politicians are wasting their time marching in them.  Perhaps organizing tax parades should be next on the Dems agenda?  Instead of an American flag, they can carry witty signs about other people's money.

So get off the computer & get your children to a 4th of July parade; their future may depend on it. 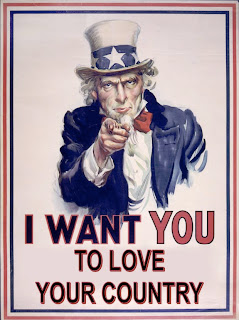