The Chains We Choose 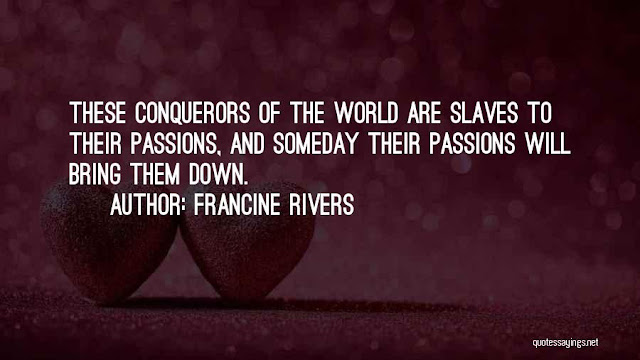 Last week I bombarded you with pictures, so today there will be no pictures, & there will only be a few short words. It's too hot to think deeply, y'all. The post-July 4th slog until college football returns is the longest slog of the year. It's hot in June in Louisiana, but usually the real hot heat, the upper-nineties, Amazon-rainforest-humidity heat arrives in July. June flirts with ninety-three, ninety-four. July sees June's ninety-four & raises it to ninety-seven, & when you get back in your car after buying groceries the temp gauge on the dash reads 120.

It's hot, & the news is insufferable right now. I admit my perception of things (people, events, everything) is perhaps somewhat skewed at the moment by what I'm reading. I told you last week I was reading A Voice in the Wind by Francine Rivers. I finished that book in time to meet with the book club ladies last Tuesday night. We had the best time. Summer book club meetings are wonderful because we're all a little more relaxed given that the majority of us either have school-age kids or teach school or both, so collectively we are a jolly, well-rested bunch in the summer. We went strong for about four hours last Tuesday night, & while we ate & discussed non-book related matters, we also had a rousing discussion of Ms. Rivers's book.

I am now reading the second book in the Mark of the Lion series, An Echo in the Darkness, & I remain riveted. It is due to my continued immersion in Ms. Rivers's historical fiction that I believe I might be judging people & the world in general a little harshly (or hey, it is quite possible everyone deserves my harshness). I can't tell if people are actually as awful & selfish as they seem, or if, in light of the story of Hadassah, many people seem more awful than they actually are.

At the moment my thoughts are centered on this recent crop of American athletes whose selfishness is astounding. I wrote a thing that might be published elsewhere, so I am not at liberty to share it in its entirety right now. One day last week I'd had my fill of Colin Kaepernick & his absolute idiocy when it comes to the history of this nation (as well as his duplicity for insisting for months his kneeling during our anthem had nothing to do with the anthem or the flag).

Here are a few snippets:


It is July again in America, and as is the case seemingly every year the occasion of America’s Independence Day did not pass without an inane controversy . . .

When former NFL player Colin Kaepernick led a movement among athletes to kneel during the national anthem, a great many people were sympathetic to Kaepernick’s claim he wasn't kneeling to disrespect our flag or our anthem or our military, but rather he was kneeling during the anthem to protest police brutality. That narrative has unraveled spectacularly over the past week as Kaepernick, a Nike spokesperson, demanded Nike halt the planned release of sneakers displaying an early American flag sewn by Betsy Ross. The implications of Nike’s decision say far more about the need some have to feel aggrieved than they do about Betsy Ross or her famous flag.

Nike is a successful and typically well-run company, but they dropped the ball on deferring to Kaepernick and pulling these sneakers days prior to July 4th. A simple Google search reveals the overwhelmingly positive history and use of Ross’s flag. It was a prominent part of Obama’s inaugural festivities and has routinely been used as an uncontroversial salute to America’s perilous but inspiring early days as a republic.


Like Kaepernick, American soccer player Megan Rapione is quite adept at garnering headlines. Sadly both these individuals play(ed) a team sport, but history will likely not remember them as team players. Me. Me. Me. That's what I think of when I think of these two. My name, my grievance of the day, be it with the president or the cops or whomever or whatever I decide is offensive.

When I was in college the country singer Toby Keith released an objectively terrible song titled "I Wanna Talk About Me." It's about a man who has grown weary of his girlfriend's incessant chatter about herself.

A sample of the lyrics:

It is a terrible song in every way a song can be terrible. One of my great joys in college was listening to a handful of friends mock this song. Anyway, the lyrics to this song have been on my mind lately as I watch these athletes thumb their nose at the nation that gives young men & women like them a chance to see their dreams realized. I am sad for them, as I suspect there is a gaping hole in their lives that no paycheck & no trophy can fill. An emotionally healthy individual doesn't behave the way they have on a worldwide stage.


For those of you who've read Ms. Rivers's novels, if you notice I sound like Hadassah, well, good. That's my new goal. I don't like the example these athletes set for my young children & millions of young children who're watching them, but beyond that I am truly sad for them. What I've learned thus far from Hadassah (or what I've been reminded of, rather) is that one of the mightiest ways a Christian can preach the gospel is by abandoning self. I have to get myself out of the way. It's so crucial to genuinely care about the welfare of others, even those who curse & revile you, even those you find terribly selfish who set a bad example for your kids. Even them.

Most of the people on the world stage are lost souls, y'all. Often they've emerged on the world stage because they're a slave to some passion that will eventually eat them alive. We should turn our children's eyes from them, determined to surround our kids with people we do want our children to emulate (we should be people we want our kids to emulate!). We should also pray for these people who wrestle with demons on a very public stage. We should pray for them because they will spend eternity somewhere, & we should pray for the softening & turning of their heart because they could be such forces for good.


I am thinking of Marcus Valerian, Hadassah's love interest, as I type all this. He is the son of a wealthy Roman citizen. He dabbles in worldly pleasures, but gradually, due in large part to Hadassah's steady, selfless presence in his life, he realizes he is miserable despite being surrounded by every pleasure the world has to offer. The second book in the series focuses heavily on Marcus, & I am reading that now.

If asked what my passions are, I'd probably immediately give some answer about coffee & books. Hadassah's story has reminded me of what it means to truly live for Christ, to have every step, every thought directed by Him. The most obvious outward sign that a person is living for Christ is that they have stepped aside, their selfish desires are in check, & people see not Anna, not Hadassah, but Christ.

The world encourages & applauds selfishness. The world is actively encouraging our children to focus on themselves, to pursue their worldly passions at any cost. It's so hard not to be selfish. We are by nature selfish creatures. When we're tiny infants it's for survival purposes that we pitch a fit the moment we have a need that's not being met, but in many ways the world encourages kids to continue this practice into adulthood.

Too few people encourage kids (or adults) to be content in their circumstances, to be thankful for what they have rather than aggrieved for perceived slights. Maybe it sounds harsh, but I actively try & teach my kids that no one owes them anything, but rather they owe Christ everything. I don't always do a superb job of living my life to reflect this message. I think it's fortuitous I've come to Hadassah's story at this juncture in my life. Her story is, among other things, an excellent reminder of the power of a good example, a quiet, faithful, example. She berates herself at times because she is too timid to stand on a rooftop & preach the gospel, but she doesn't realize the impact her daily example has on others. It's a powerful reminder of Paul's words, to live is Christ, to die is gain.

I hope you're currently reading something that is inspiring you as fully as Ms. Rivers's series continues to inspire me. We have a somewhat low key week ahead of us, though every week seems low key after you spend two weeks in June touring every theme park in California. I pray you have a great week.