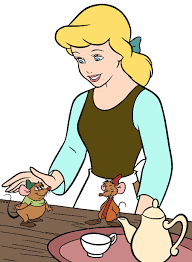 I begin with some photos I took last Monday when the kids & I went to register them for the upcoming school year. 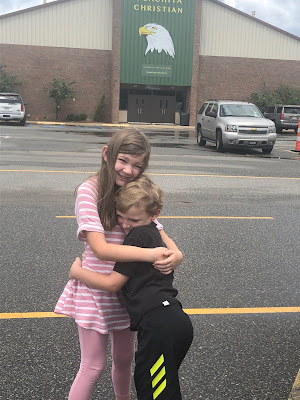 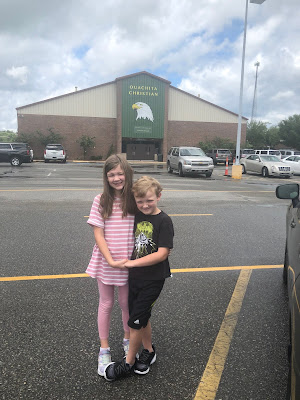 For comparison, I took these three years ago circa July of 2016 on the day I registered Reagan for kindergarten: 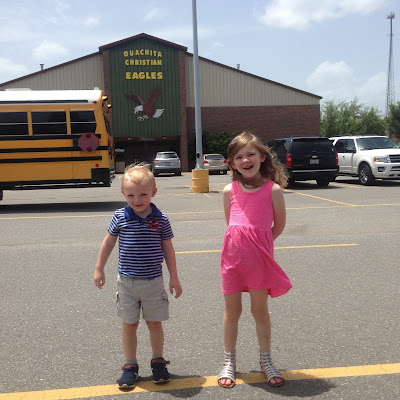 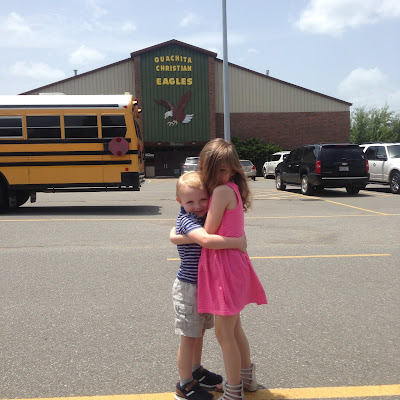 Life sometimes unfolds in a curious way. Last week I shared the harrowing tale of the July day we spent without a functioning air conditioner. Something else unsettling happened that same Tuesday, & it is the subject of today's post.

Once the air conditioner was finally working that fateful Tuesday I took a quick shower & hastily dressed myself. I had plans to meet a handful of my former students for dinner. Once we were all dressed, I loaded the kids in the car. The plan was to drop them at Trey's office & then head to my destination. En route to Trey's office Henry told me he saw a mouse in the car. He calmly said it darted under my seat. You can imagine the control it took for me to continue barreling down the Interstate after Henry made this announcement.

Once it was feasible for me to stop the car I did so. I looked & looked. I got a stick & poked & prodded everywhere, but there was no mouse to be found. That was the end of that matter, or so I thought. We'd all spent a long, hot day in the house waiting & hoping the air conditioner repair man could fix our air conditioner, so I figured Henry was just tired & saw some toy or something that rolled under my seat.

Fast forward a week or so to this past Friday. I stepped outside Friday afternoon to load a few things in the car. The kids & I had plans to spend the afternoon & evening at my parents' house. Without going into too many disgusting details, I'll just say I noticed evidence indicating Henry may have actually seen a mouse in my car. I didn't see a mouse, but I saw evidence of a mouse.

I took a few minutes to lose it while I was alone in the garage. I then went in the house & put on some gloves & grabbed a container of Clorox wipes. Any idiot knows mice can carry diseases, but due to my obsession with Forensic Files I am familiar with all of the rare but awful diseases mice can introduce into an environment.

I scrubbed down the inside of the car quickly. I couldn't assess the situation as completely as I wanted to at that time because we were already late leaving to get to my parents' house. I decided not to tell the kids of my suspicions. I did later share my suspicions with Trey (I was not calm). I told him the options were to have the car thoroughly cleaned on Saturday & to then put out some traps, *or* I could accidentally roll the car into a lake & we could use the insurance money to buy a new car that wasn't doubling as home to a mouse.

Saturday was a long day of addressing the mouse-in-car situation. I had an appointment to get my hair cut at ten Saturday morning. Immediately after that I had the car cleaned at a local car wash, but I knew their efforts weren't enough. Armed with Clorox wipes, soap & water, & toothpicks, I spent several hours in the sauna-like garage Saturday afternoon.

Around four o'clock Saturday afternoon I found myself sitting in my driveway cleaning Reagan's booster seat. There was scrubbing involved, & it was also necessary to use several toothpicks & an old toothbrush. I was sweating profusely. The heat index was likely hovering somewhere around 100, & the humidity was crushing my soul. I was inwardly cursing the mouse.

It was quiet outside while I worked until my neighbor came out to sit on her porch. She's been our neighbor for less than a year, & I've talked with her a handful of times. She's a widow. I don't know if her cell service is better outside on her porch or if she just enjoys sitting outside talking on the phone while her new puppy (Daisy) plays in the yard, but regardless of her reason(s) for doing so she carries on a great many of her phone conversations outdoors. This means, as you might guess, that I occasionally overhear bits & of pieces of her business, & this was certainly the case Saturday.

During this mouse ordeal I've thought often of Cinderella. I had to explain to the children that mice are not, in fact, our friends. We think of Cinderella as being fictional because of the fairy godmother & the handsome prince who rescues her & all that jazz, but the fact that mice are her friends is something we don't discuss much with children. Mice are disgusting vermin. They are not cute fluff balls we welcome into our homes (or cars). They carry diseases, & we lose sleep & our sanity until they're caught.

I admit in the mouse-centric drama that's dominated my life the past few days I am of course Cinderella. I felt like Cinderella Saturday afternoon while sitting in my driveway scrubbing grit from Reagan's booster seat in the hopes of denying a rogue mouse his food supply while listening to my neighbor discuss in detail the wardrobe she plans to pack for her upcoming vacation. 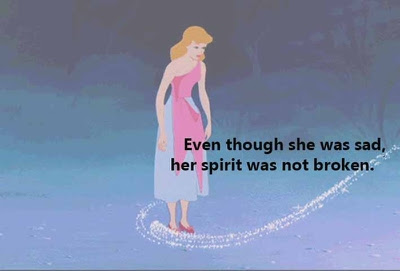 I've also felt like Cinderella, who famously encourages us to have courage & be kind, because it takes a great deal of courage to continue to climb in my car & drive it knowing there may well be a mouse lurking somewhere inside.

If you're curious, & I guess you must be if you're still reading at this point, I believe I've figured out how & where the mouse came to live in my car. I have never once seen a mouse or evidence of a mouse since we moved into our current home. Trey has traps in the attic that are always bereft of mice, & there are a handful of healthy-looking cats I frequently see roaming our street. My theory is that while my car was parked at the local airport during the ten days we spent in California a mouse was attracted to my vehicle & the sea of crumbs my children left there. I think it's a pretty good theory.

I will of course keep you updated on the mouse situation. Aside from being tormented by a vermin I am in good spirits. I am, as I mentioned last week, rereading Twilight in order to fulfill July's book club duties. I've come to the end of the book, & guess what? I still love it. In fact, the only thing that saved you from a Twilight-themed blog today is my mouse friend. The book club is meeting this Friday. Our assignment is to read Twilight, but I think a handful of the ladies barreled through the entire series (a reread for most of them I believe). The decision I now face is whether or not I will reread the subsequent three novels.

I have admittedly been lured back into the world of Twilight. I know this shocks you. It's been ten years since I first read the series. In November of 2009 I was newly married & had no kids. I raced through those books. It was glorious. I was reading fiction again after having not done so for several years, & I remembered how much I love to read fiction.

In the summer of 2010 I was pregnant with Reagan when I saw Eclipse in the theater (all fives times). I left her asleep at home with Trey when I left under the cover of darkness to see Breaking Dawn I & II at midnight when those films released.

Now Reagan is almost nine, & I am a decade older than I was when I first met Edward. On Saturday I thought about carefree Anna racing through the Twilight series as I listened to my neighbor excitedly discuss her vacation plans. There are a variety of places I'd like to go on vacation. I'd like to go to Joanna's Silos in Waco. I'd like to go to Key West one day & see Hemingway's home there. Right now I can't imagine having a lengthy phone conversation about anything in the middle of the day while the kids are awake, much less discuss in detail the wardrobe I'll pack for my upcoming solo vacation & what might be best for each planned activity (I was not trying to listen to her conversation, but she was loud).

All of this was churning in my head Saturday afternoon as I toiled in the driveway, scrubbing Reagan's seat & listening to my neighbor excitedly make her vacation plans. At the end of the day I went inside the house I share with my family & my two puppies I love so much (I love my family, too, not just the dogs). I know there are trade-offs. I know my neighbor is able to make plans & travel with only her own schedule to consider because her children are grown & she is widowed. It's quite possible she's jealous of the activity she witnesses at our house (it's also possible the kids are loud outside & she despises us).

When I crawled in bed Saturday night I returned to Forks (my prince charming having already dozed off in his recliner in the living room). I always encourage people of all ages to read, but if you are a mom of young people, if you find yourself a wee bit envious listening to others make their vacation plans while you scrub carseats in order to try & rid your life of vermin, you need to read fiction. Satisfied that I'd scrubbed every inch of the inside of my car, that evening I snuggled under the covers, & suddenly I was again in my twenties, carefree & immersed in the little world Stephenie Meyer created.

To sum up, have courage. Be kind. Read. And don't let your kids eat in your car because it is an open invitation to Satan's little minions.

I leave you with this link to Robert Burns's poem "To a Mouse."  Have a wonderful week.