Worse Than Words Can Paint 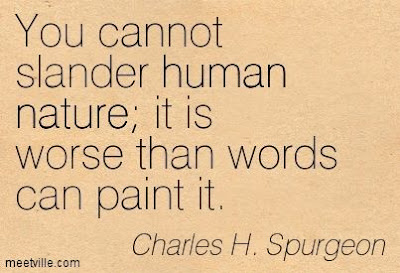 Forgive me for that peppy title obviously taken from the equally peppy Charles Spurgeon quote about which I'll momentarily share a few thoughts. And I do mean a few. I don't want to dwell on today's subject too long. I don't want to expend many words on it.

Considering today's topic (which is, spoiler!, human depravity), last week I somewhat ironically shared with you a few things that were lifting my spirits. I knew from my social media feeds a great many of you were consumed by anger & frustration over the infamous no-call pass interference at the conclusion of the Saints final game of the season. You can read last week's peppy post  - - - > here if you missed it.

Shortly after my attempt to encourage you all to keep your chins up, the New York State Legislature passed legislation that threw me into a pit of despair from which I have not fully emerged. Unless you live in a cave you're aware of the recent changes made to abortion laws in the state of New York. This recent legislation is by far the nation's most permissive abortion law, & I suspect & hope it will soon be challenged in court. The 1973 Roe decision recognizes that at some point (& I believe Roe names the third trimester) the life & rights of the baby eclipse any right the mother supposedly has to abort the baby. Even in 1973, without the knowledge & the amazing images science & technology afford us today, those men knew there is something sinister & evil about killing a baby so large & developed he or she could most likely survive outside the mother's womb. So, I hope there is a legal challenge, & I hope the higher courts strike the law & deliver a verbal lashing to the state of New York in the process.

You know what broke my heart, though, what brought tears to my eyes & sent a shiver down my spine? I knew the legislation was coming. I'd read a few articles about it in the lead-up to its passage. What I didn't expect were the uproarious cheers from lawmakers after the law was passed. You've probably seen pictures or video of what I am referencing. I am not going to share any of the photos or link to any videos here. Their laughter, their arms raised in the air in triumph over the passage of this barbaric law, is perhaps the clearest visual of Satan roaming the earth I have ever seen. A variety of Bible verses & C.S. Lewis quotes flash in my mind whenever I again see those haunting images of men & women applauding, patting themselves on the back for amending what were already inhumane laws.

I have watched the abortion debate evolve in my lifetime. Those who label themselves pro-choice used to claim they wanted abortion to be, "safe, legal, & rare." They claimed they were champions of adoption, but that abortion must remain legal so that in rare instances when it is absolutely necessary it is an available option to a woman.

It is 2019. I can't recall the last time I heard a politician use the "safe, legal, & rare" claim in regard to abortion. It is no longer a procedure they reference as a necessary evil; it is an occurrence they literally celebrate.

In The Screwtape Letters Lewis says this via his narrator, the demon Screwtape: 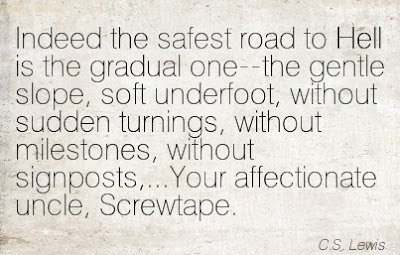 The march toward last week's legislation has been slow but steady. It's been a linguistic battle for sure. The media has been wholly complicit. The outcry over last week's legislation (along with nearly every nationwide poll on the topic of abortion) tells me most Americans are uncomfortable with abortion. Certainly most Americans were repulsed & angered & deeply saddened by the cheers that erupted in New York last week. The media & many on the left have tried hard. Their efforts have been truly remarkable, & there is considerable legislation in their favor at the moment, but despite decades of spewing slogans about My Body! & using terms like fetus instead of baby, most Americans, & I believe many, many young Americans, know that what is aborted is a life that deserves the same protections under the law afforded me & you.

Honestly I believe even most of those cheering last week know an abortion kills a child; they just do not care. They have to use words like fetus to keep up appearances. For years they kept up appearances well, but the mask is slipping. The mask fell completely off last week, & ultimately I think they did their cause great harm by allowing all of America to watch in horror as they not only signed this abominable legislation but heartily cheered it.

In addition to The Screwtape Letters, Lord of the Flies came to mind when I saw & heard the cheering last week. Lord of the Flies is a masterpiece & is a staple in high school classrooms because it is such an excellent exploration of human nature. The sad reality is as Spurgeon stated, that human nature is worse than words can paint. If a picture is worth a thousand words, the image of legislators cheering the passage of a law that allows a baby to be injected with poison & killed is a picture of human depravity more vivid than any author could pen.

The lesson (or one lesson) in Lord of the Flies is that before humans begin killing one another it is necessary for them to dehumanize one another. Read the book again. Note the slow but steady process Jack & Roger undergo as they begin to see Ralph & Piggy & many of the other boys not as their classmates, not as fellow human beings, but as, to quote the novel, "a bag of fat." Prior to hurling the boulder that sends Piggy to his death, it is stated that Roger assesses him & sees, "a bag of fat." A bag of fat. A fetus. Dehumanize, & thus grant yourself the permission to kill without your pesky conscience bothering you.

At the end of the novel Ralph is described as weeping, ". . . for the end of innocence, for the darkness of man's heart." Ralph realizes what Simon knows from the beginning: "Maybe there is a beast . . . maybe it's only us."

I apologize for the bleakness of this post. I will end with this. There is hope. We are autonomous beings with the free will to resist the darkness that pulls at us. Is human nature frightening? Yes, it absolutely is; that was on full display in New York last week. Is Simon right? Are we the beast we should fear? I think that question was answered with certainty last week in New York. Is our only option to succumb to the darkness? No. Thanks be to God for His Son who lived as one of us, who took on flesh & its sinful, dark nature, yet did not sin. The darkness will claw at us at times. The world will implore we join in as they cheer infanticide. We must not only refuse to join the mob, we must speak up &, with our words & our actions, fight the darkness in our own soul & light the way for others.

As long as I live I will not forget the sight of those cheering legislators. May their cheers ever be a reminder to us that evil is real, none of us are immune to it, & it takes daily, constant, cognizant effort, along with the help of the Father, to blot out the darkness with light.

Email ThisBlogThis!Share to TwitterShare to FacebookShare to Pinterest
Labels: Abortion