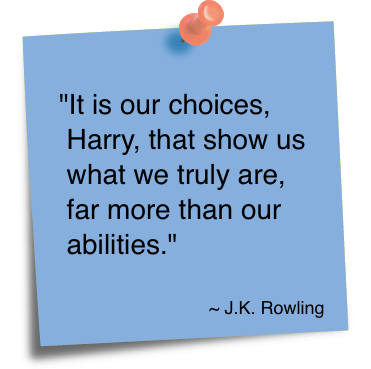 It is Bama week. 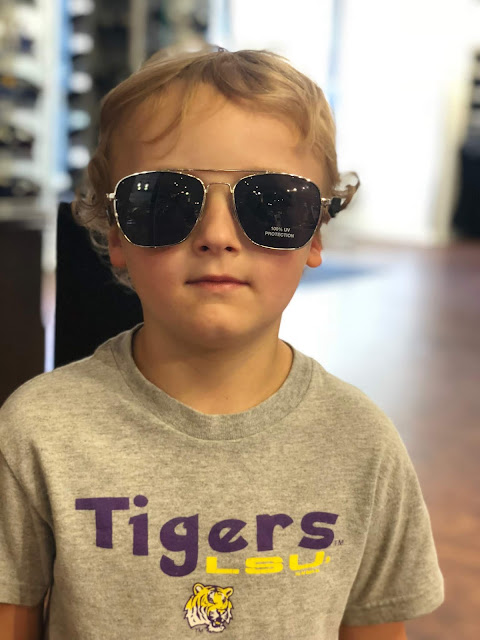 My mind is scattered with a CAPITAL T this morning. Forgive my caps lock moment. When I type test directions I always ask that students, "Use a CAPITAL letter to indicate the best answer to each question." I've always thought this a clever & helpful way to remind students that their CAPITAL letters are much easier to read/grade than their often similar-looking lowercase letters, but without fail two or three people inevitably submit a test paper filled with lowercase letters; I write them a note intended to make them feel great shame.

So, anyway, scattered. I won't bore you with the details of this morning's to-do list, but it's just a mess of school-related & mom-related & housewife-related things that, when viewed in isolation, don't look daunting, but when compiled in a list (I have compiled them in a list, of course) leave me turning circles & wringing my hands over what to do first. Naturally I've decided to sit down with my first cup of coffee & blog.

I was close to taking a rain check today, but here I am, so let's see if I can make this worth our time.

Last Monday I brought you up to speed on October happenings in our corner of the world. The October merriment continued to dominate life for my children the remainder of the week.

Henry's class was supposed to visit a local pumpkin patch last Thursday, but it rained all day. His crafty teachers created a lovely pumpkin patch in their classroom. Despite the soggy weather, Henry was still able to select a pumpkin he then artfully painted with all manner of colors. I believe they also had a picnic lunch in their classroom & watched a Charlie Brown film that is somehow pumpkin-related. Henry was excited about the day's theme & wore this shirt that is a size 5-T & doesn't really fit him all that well anymore, but hey, the boy loves a good theme like his mama. 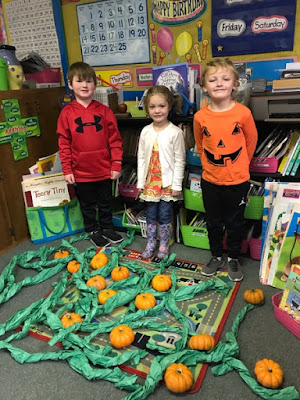 Reagan's week was not without fanfare. Her class was in charge of elementary chapel last week, & they did not disappoint with their lively version of the Creation story. As you may've guessed, Reagan was the moon. She is pictured here with her moon & her good friends the sun & the stars. 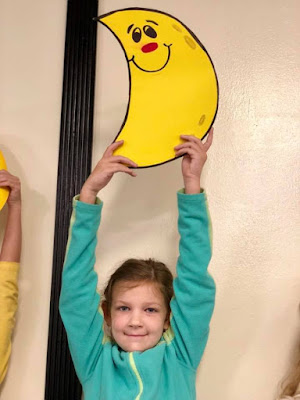 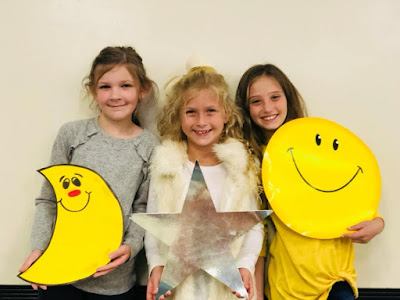 The week ended as many of our weeks do . . . with a birthday party. This one was incredibly pleasant. We celebrated two of Reagan's friends (twins!) at Kiroli Park. The weather was fantastic, & the kids left with a goody bag AND some face art. 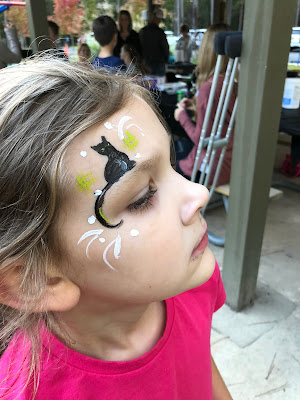 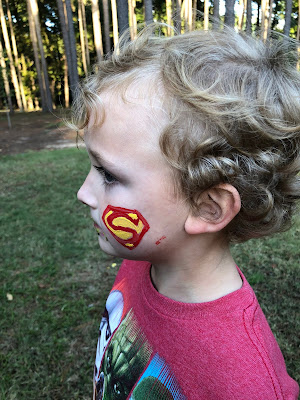 Yesterday our church held its trunk-or-treat. Despite my aversion to standing outside in the heat & my aversion to tons of candy, I figured I better let the kids go because it looks like it will be raining here on Halloween night; I don't know how much traditional trick-or-treating will be happening for us.

Reagan wanted to be a witch this year. Henry would like everyone to know his preferred costume is Mario, with whom he's currently obsessed, but the costume Trey ordered has not yet arrived, & so he opted to go as a train conductor yesterday. 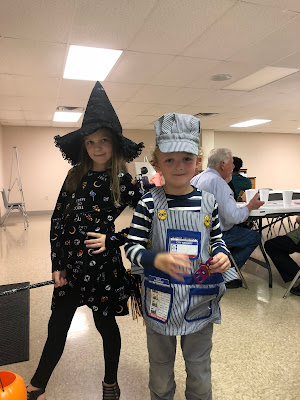 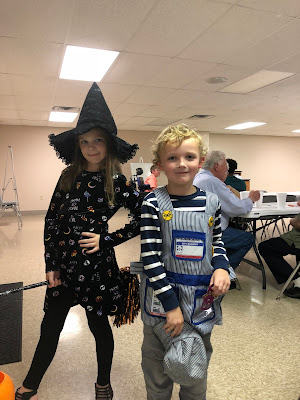 I note that this is not the first year Reagan has donned a witch outfit. 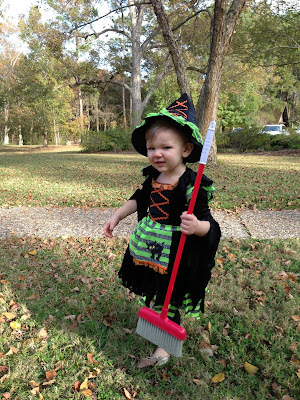 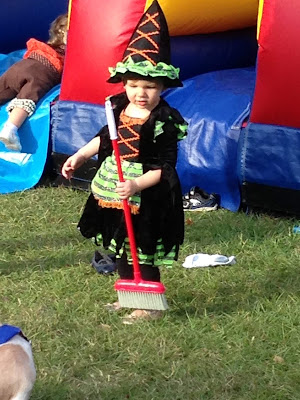 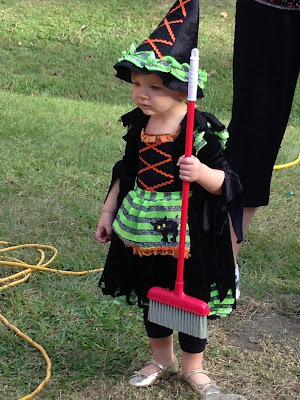 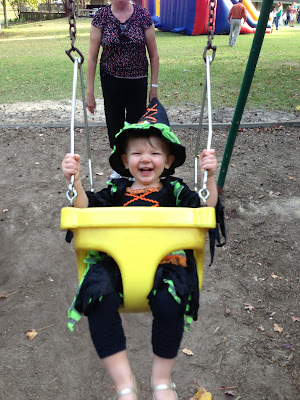 The above pictures are from Halloween 2012. She is adorable, obviously, but I was a few weeks pregnant with Henry at the time these were taken, & just seeing these photos makes me a little queasy. I don't know that PTSD is an accurate way to describe remembering with horror how nauseated you were while pregnant, but you get the idea. I am so, so thankful I am not nauseated now. Remember how I didn't want to drink coffee, & I felt lost & confused for months & months? Man, that was rough.

Without any further ado, here are this year's school photos. Not too shabby. 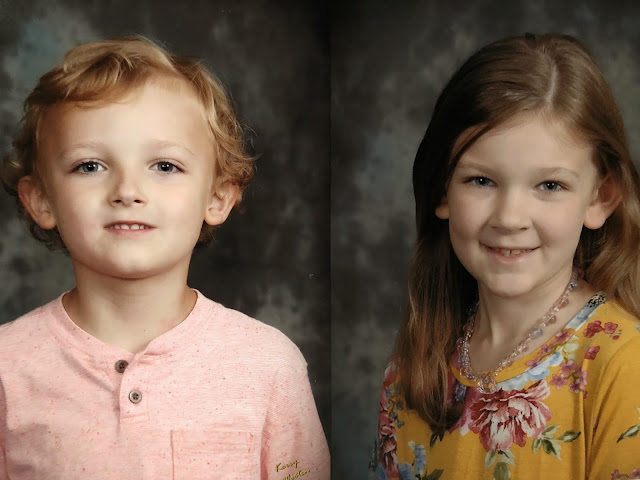 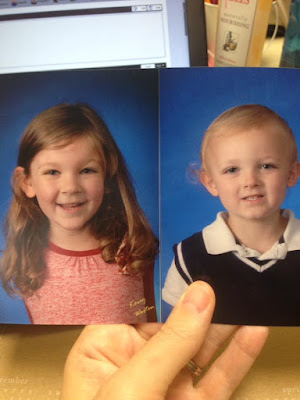 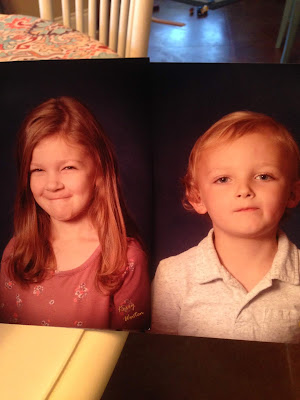 So all that is well & good. The children have had a lovely October, & November looks busy, full of fun, & promising as well. With that said, let me tell you what I did last Tuesday night. I mentioned last week that my sister & I had some potentially big plans for her birthday, which was Tuesday. I actually invited my sister as well as our entire book club to join me at the movie Tuesday night for a special it's-been-ten-years-since-the-film-was-released showing of Twilight. As it turns out, I am the only member of my book club with my priorities aligned, but that is okay. None of them joined me, but nonetheless I had an amazing time. I was surrounded by other women who laughed & clapped & sighed at all the appropriate times.

When it was originally released I did not see Twilight in the theater because in 2008 I was a naive fool & had not yet read the series. I thought I'd go Tuesday night & have a ho-hum time. It's always nice to sit in a movie & eat popcorn.

I ended up enjoying the movie a lot. It is a campy film that was made on a small budget, but ten years out, knowing how the franchise exploded & how much money was eventually spent on later films, I have to say director Catherine Hardwicke did a really nice job with Twilight. Her casting of Anna Kendrick (of Pitch Perfect fame) as Bella's friend Jessica Stanley is in & of itself a stellar move for which Hardwicke deserves praise.

I know Hardwicke did a good job with the source material because I walked away from the film awash in thoughts about what originally made me love this series. Some of Edward's lines about his monstrous nature, about the decisions he makes constantly, are noteworthy (they are!). Edward repeatedly tells Bella he is a monster, & she should stay away from him. Bella doesn't believe him; she *spoiler* doesn't stay away. This book, this series, has been maligned by literature snobs & feminists & everyone in between, but I will continue to defend it & continue to explain why Meyer's Edward Cullen is far from the worst book boyfriend a young female can have. I was reminded of all this last Tuesday night.

This business about Edward is nothing I haven't mentioned on the blog before, & in fact there is a conversation about Edward's nature in Dear Miss Moreau. Edie has an exchange with Dr. Foster in one of the later chapters of the book. They're hashing out her thesis, & he is forcing her to figure out what exactly it is she's trying to say about the fictional characters about whom she's writing. He asks her what it is that draws readers to Edward Cullen, why, of all the fictional characters in all the books in the world, does Edward leap off the page & grab the attention of so many female readers?

Edie tells Dr. Foster she believes a large part of Edward's appeal is his self-control.

To quote, well, me from Chapter 22 of Dear Miss Moreau:

"Setting Bella aside, what do you admire most about Edward?"

"If I have to pick just one, I would say his self-control."

"I think it's one of his more appealing qualities and why Meyer's female readers are so enamored with him. Their lives are inundated with men—the boys in their classes, the men they date, the men they marry, and sadly, sometimes their own fathers—who exercise little to no self-control, often to the detriment of those they claim to love."

"So it's not that he can leap tall buildings or that he sparkles?"

"Those are endearing qualities to be sure. But, no, I think his ability to control his urges—especially his most carnal urge to prey on humans—is his most attractive quality. He is dangerous, as he repeatedly warns Bella, but if he's in control of himself, by his side is the safest place she can be. It drives the girls wild. Whether they realize this is why they love him or not, it is. This is my humble opinion, of course."

"So, temperance is the new sexy?"

"Yes, I suppose it is. Restraint, guardedness, however you phrase it, despite uncivilized, even animalistic urges."

So what is happening here is not simply Edie discussing her thoughts on Edward with Dr. Foster. No, no, no. What is happening in this scene is Edie giving Dr. Foster instructions as to how to proceed with her. Ah, ah! Yes. See what I did there?

I do believe there is truth in what I wrote. Self-control is a lost art. This is evident everywhere you look, from the rising obesity rates to the alarming rise in STDs. Ladies, stop dating & marrying & reproducing yourself with men who lack self-control. That is the end of today's sermon as I've got to move along to some tedious school-related matters.

If you've never read my book I promise it is not simply about a graduate student who's a Twilight fan. The actual Twilight discussion in the book is minimal. I will shamelessly tell you the paperback is now $13.99 & can be found here. If you have read it but have not left a glowing review for me on Amazon, do that post haste.

So anyway, seeing & hearing many of Edward's lines—lines I believe are actually noteworthy to anyone desiring to understand why so many crazy women of all ages were & continue to be drawn to this series—on the big screen awakened the somewhat dormant Twilight fan in me. Isn't it nice to be reminded of why you initially felt such fervor for something? Not only did I leave the theater with a brand new poster courtesy of Cinemark . . . 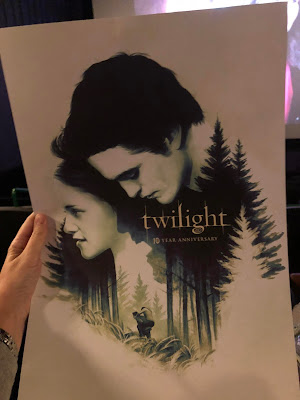 . . . I left with a bellyful of popcorn & a nice reminder of why I'll always stand up for Meyer's books  (despite their flaws) & recommend them to females of all ages. There is no chance your young daughter is going to meet & fall in love with a vampire. There is a great chance she might meet & think she's fallen in love with a man who lacks self-control, which will prove detrimental to her future; I promise you the least dangerous thing she can do is spend time reading about Edward Cullen, & in so doing she may even unknowingly pick up some helpful dating tips.

Edward chooses to war against his nature. And don't we all? Or rather, shouldn't we all? We all have monstrous, sinful tendencies lurking inside of us. We do. We have to choose not to nurture & feed the monsters. Edward's greatest fear is that he'll lose control of himself & harm those he loves most; does that sound familiar, moms of little people? It is for us as it is for Edward: it always comes down to choice. As Dumbledore tells Harry, "It is our choices, Harry, that show what we truly are, far more than our abilities."

Make excellent choices this week, y'all. They're yours to make, but their repercussions span far & wide.

Today I choose to believe I will return to you in November with celebratory greetings regarding LSU's improvement to 8-1. GEAUX TIGERS. 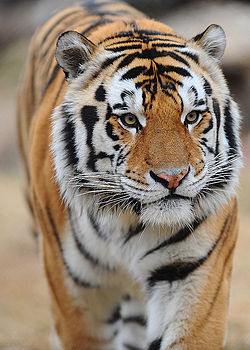 Email ThisBlogThis!Share to TwitterShare to FacebookShare to Pinterest
Labels: Twilight