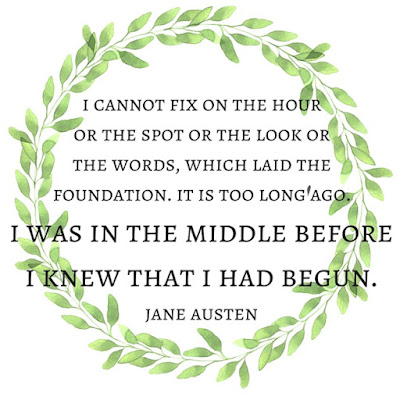 I'm officially on break & have been since around eleven Friday morning. It hasn't felt like much of a break yet because, you know, the kids are also on break & everyone wants Christmas presents & green bean casserole & their essay graded.

It's actually the ungraded essays that prompted the few thoughts I'll share this evening. Well, the ungraded essays as well as Jane Austen's birthday, which was yesterday. Jane Austen was born on December 16, 1775. I was reading through some of her best stuff yesterday during my ten minutes of downtime, & I came across the above quote from Pride and Prejudice. Miss Austen has six novels to her name & wrote many excellent & memorable characters, but Pride and Prejudice is, I believe, her best. The above lines are of course Mr. Darcy's.

Today is the day Trey proposed to me; it was December 17, 2008, to be exact. I am certain he does not know that, & that's okay because were he too much like me we'd probably hate each other. One of my former students recently became engaged. I was discussing her engagement with a few current students last week, & one of them asked me about how Trey proposed. I told her & the other young ladies the romantic tale of the revolver he bought me, & how he cleverly tucked the ring inside the lovely silver case that held the revolver. I still have the ring & the revolver, & I often travel with both.

Last week we celebrated Reagan's seventh birthday. Seven, y'all. On Friday, I flew home from giving my last midterm to join Trey, the kids, & all four grandparents for a quick trip to Palestine, Texas where we surprised the kids with tickets to the Polar Express. Courtesy of the Texas State Railroad, this is quite a production & something you ought to consider before your kids are too old to appreciate the magic. You need to reserve tickets well in advance; you can learn more by clicking here.

Last week was an absolute whirlwind. Reagan turned seven. We surprised her with her much-coveted American Girl doll. 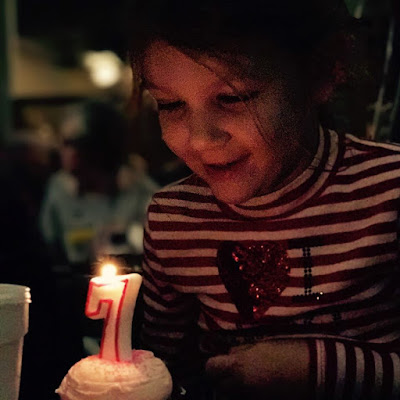 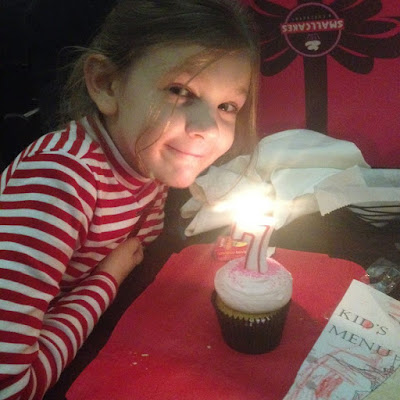 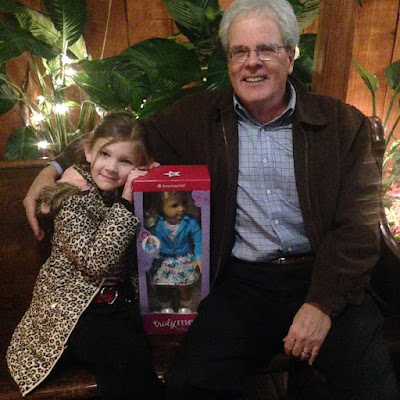 On Wednesday of last week, Reagan & her fellow first graders were responsible for chapel. 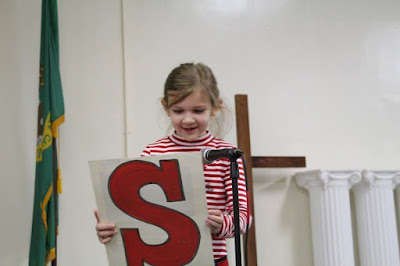 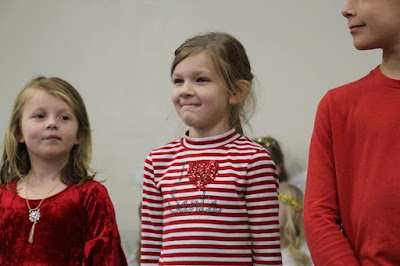 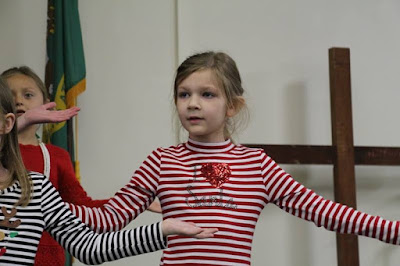 I spent the first twenty-four hours of my much-coveted Christmas Break driving to & from Palestine, Texas to ride the Polar Express. 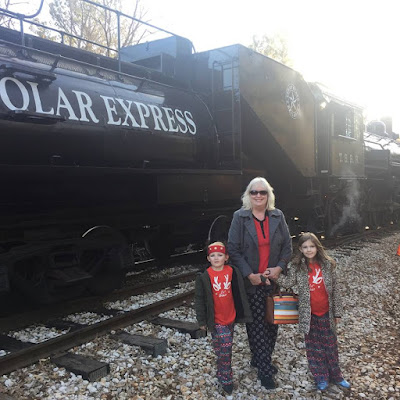 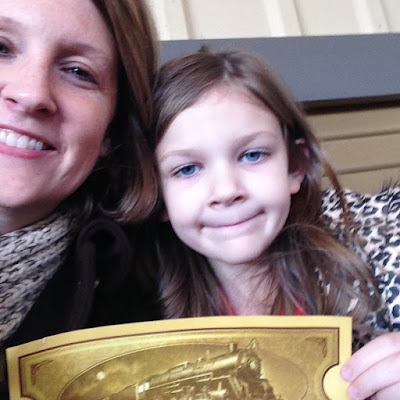 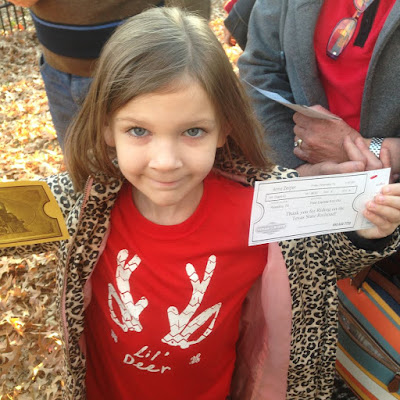 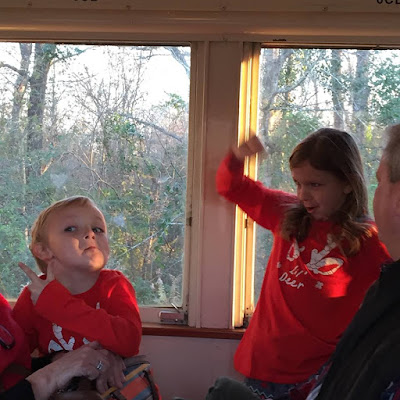 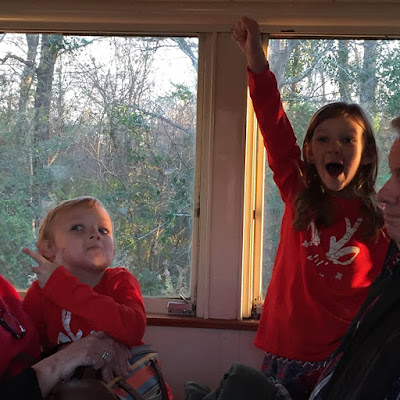 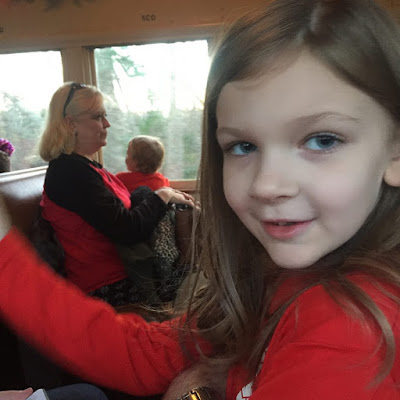 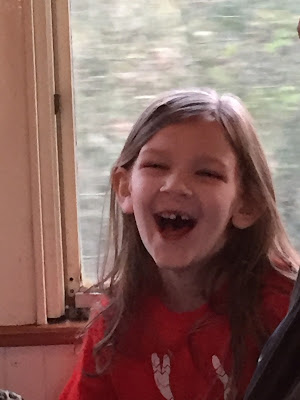 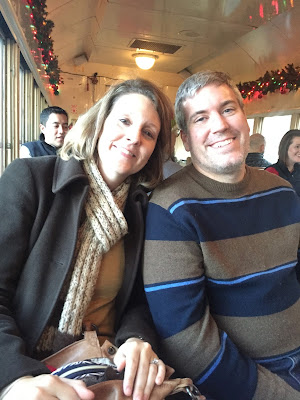 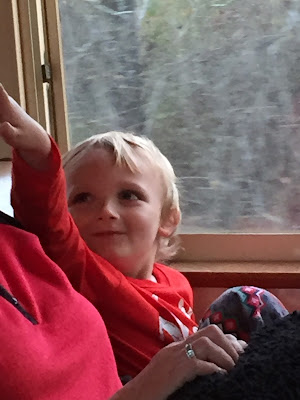 We boarded the train at five in the evening. It was still daylight outside. I sat, thrilled to be sitting, & watched a relatively uninteresting stretch of Texas pass outside the train's large picture window as we churned toward the "North Pole." I took some pictures of the kids. My mom took a few of me & Trey. I scrolled through everyone's pictures in between musical numbers & the oral reading of The Polar Express.

I haven't ridden on many trains, but it's an experience I'd be willing to repeat. There is something soothing, hypnotic even, about the sound & the forward motion & the sway of the car. For a brief moment, while the kids' faces were turned to watch the landscape outside their window (& before Reagan's sugar dropped to thirty-three, likely because she didn't drink her hot chocolate & she was incredibly excited about the train ride), I did what people always suggest: I sat & enjoyed the moment.

I told you the ungraded, languishing essays inspired this evening's thoughts. The thing is, I could put a grade on an essay in five minutes. One quick read-through & I have a basic idea of the grade the author has earned. What takes time is explaining my thoughts to the author, diving into the details of the grade. I didn't want to sit & write a blog today anymore than I want to grade essays, but in the end, when it's all said & done, I am glad I took the time to share my thoughts, to share the details. Details blur with time, whether it's a week that passes in between the time I read an essay & the time a student questions me about the grade, or the many, many years that have lapsed since Trey's sister & my sister were teammates on a Dixie Ponytails softball team, which led to our parents' friendship, which led to, well, the train ride I found myself on Friday evening.


Trey turned thirty-nine this year; we have two kids, one of whom is seven years old. My sister has two kids. Trey's sister has a baby boy on the way. I am responsible for making green bean casserole to take to my aunt's house for next Monday's Christmas dinner. When did this happen?

In a week's time Christmas Eve will be upon us. This will be our fifth Christmas as a family of four. This past year I published a book that for years existed only in my head & on my computer. Life moves. It moves so incredibly quickly. You're constantly laying foundations upon which you might possibly build the rest of your life, upon which your kids will build their lives, & sometimes you've no idea this is happening until you find yourself asked to make Christmas merry & bright for two small people and also please bring a corn casserole & a green bean casserole.

Years & years ago I met Trey. Seriously y'all, Bill Clinton had just been elected to his first term. He was for several years on the periphery of my life (Trey, not Bill Clinton), until he shifted to the center, & there he has remained for a long time now. He is a good foundation for our family. He will help me tremendously this next week, having been tasked with resolving some last minute gift issues (all the gifts are last minute). He has volunteered to make the corn casserole. He's a good husband & a good father, & I am thankful he weirdly shoved my engagement ring in a revolver case nine years ago.

I'll probably have a few things to say next week, a brief Christmas Eve message laden with some pictures of how our break is progressing. I might also be unavailable for comment because I'm making a green bean casserole.