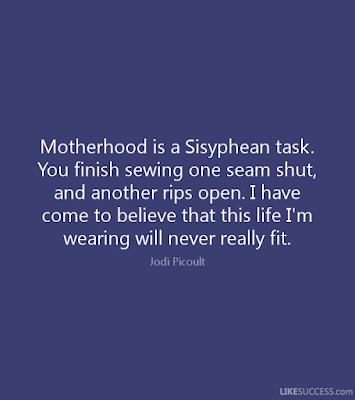 
It's early. If you're aware that the children & I are on Spring Break this week, you might've expected a late post what with all the sleeping late & lounging around we're doing, right? No. We are headed to the endocrinologist today & so I rose & showered & put on all the make-up as I do most every Monday morning. I did sleep about an hour later than school mornings allow, & I will hopefully be able to get some reading done on the drive over & back, & so I'm still looking at a pretty promising Monday. I am admittedly sweating today's A1C news due to a couple of hairy weeks about a month ago during which time Reagan ran high numbers that I could not get a handle on, so I won't make an official call regarding the pleasantness of Monday until I hear that A1C number.

Tomorrow the kids & I will again have to shed our pajamas & don the trappings of civilization because we are all getting a haircut. Reagan's getting a haircut, I am getting a haircut, Henry is getting his first haircut, & Sophie the dog is getting a much needed haircut. When you're in high school & college Spring Break is as advertised, a break during the spring. When you're an overseer of small people & a small dog, Spring Break is a week during which your presence at school/work isn't required, & so you do all the things you don't have the time or energy for when school is in session . . . like visit the endocrinologist, get everyone a haircut, & finally finish grading all the essays.

Beyond tomorrow's haircuts we've no real plans the rest of the week. I am hopeful that means essays will be graded, notes will be typed up, & I can devote some time to pouring over the analysis of a prose passage my fifteen AP students wrote just before break. As I mentally organize the week, concocting (implausible but dreamy) scenarios in which I accomplish a lot while the children entertain themselves with fun but educational games & toys while not fighting with each other or making epic messes, I can't help but continue to nurse my ire over the events of last Wednesday.

Last Wednesday, March 8, was International Women's Day. I'm unsure of when this became an official day & don't care enough to research & find out. In anticipation of this day, a handful of women (I assume women in the Western world who bask in privilege & have the time to do things like this), decided to organize A Day Without Women, the idea being that women would sit home on March 8 & show the rest of the world (men & children, I assume) how desperately they need women. As you can imagine this led like night into day to a plethora of (absolutely hilarious) jokes & memes about the roads being safer.

Obviously my first & predominant thought regarding A Day Without Women was that it was silly & stupid & would only serve to perpetuate the stereotype that women are vapid, emotional creatures. This thought tumbled naturally into some deep ruminating over a variety of Days Without in which I would wholeheartedly participate.

As we head to Jackson this morning, which we do four times a year as part of our persistent effort to manage Reagan's chronic disease, I continue to bristle at anyone, man or woman, who would take the time to organize A Day Without Women. If you have that kind of time on your hands, if this is how you expend your mental energy, you likely sat home last Wednesday without throwing anyone's world into chaos.

I had to pull the above quote from Jodi Picoult's House Rules if for no other reason than her masterful use of Sisyphean as an adjective, referring of course to the Greek myth about Sisyphus, a sinner condemned to an eternity of repeatedly rolling a boulder uphill only to watch it roll down the hill again.

Motherhood is a Sisyphean task. You finish sewing one seam shut, and another rips open. I have come to believe that this life I'm wearing will never really fit.


Like Sisyphus, many women rise early every day to again expend physical & emotional energy in an attempt to inch the boulder up the hill. You wash clothes, dishes, & tiny people, all of which will almost immediately return to a state of filth. You wipe a dirty nose only to be alerted to a dirty bottom. You finally get the dog to the groomer only to remember she needs her teeth cleaned (so says the vet). You finally lower blood sugar only to watch it inexplicably spike again. You stand at the top of the hill, muscles sore & aching, & watch the boulder tumble downward; sometimes you laugh as it slips away, sometimes you cry & decide you can't watch its descent so you leave the house & drive around listening to Whitney or Adele while ingesting something high in calories.

Ironically most of the women who desperately needed to sit home & do nothing last Wednesday probably were not even aware March 8 was designated A Day Without Women, a day on which women were encouraged to neglect their duties in order to make some sort of vague statement about how consequential women are to the world. These women who could genuinely use a day off are too busy mending ripped seams, anticipating the next tear, standing by with needle & thread in hand. They're not on Twitter posting nonsensical catchphrases or in the streets waving signs; they are standing at the top of the hill shouldering a boulder.

There are a few dates on the calendar I am eyeing with anticipation. I am planning to attend the high school's upcoming Jr/Sr Banquet at the end of this month. There are a variety of reasons for this. I do want to see these young men & women of whom I've grown so fond all dressed up. I'll tell you a little secret; I am pretty jazzed about putting on a dress (a dress that snags easily & thus sees little action because: KIDS!), sitting down at a table, & eating a meal in what I assume will be relative peace. I assume I'll have to check no one's blood sugar, nor will I be asked to cut up anyone's food, nor will I have to escort anyone to the restroom while my food cools on the table. I can be both caring, invested teacher & mom who needs to feel pretty & be alone all in one make-up job. That is winning, folks.

Additionally, Trey & his parents & my parents are planning to take the kids to a concert (the symphony, maybe?) in Jackson in April. I don't usually do math in my head, but I've done the addition & when you factor in drive-time to & from, the concert run-time, & assume the seven of them will eat dinner somewhere, I think I might finally make my way to the couch &, oh, do whatever I want. Read. Watch Gilmore Girls. Sit quietly. The possibilities are endless. And - get this - I won't get off the couch unless I want to get off the couch. Unless I need more milk alcohol coffee. No one's bladder will dictate the evening but my own.

Even on the aforementioned days, however, the weight of the boulder won't be lifted completely. There will be texts or calls regarding what Reagan is eating, what her blood sugar is, etc. You can organize all you want, & raise as many signs of protest as you please, but once you bring a child into the world, there are no more Days Without. There is no Day Without Motherhood. Ever. Even if you're on the other side of the world, you worry. When I use or read the word irrevocably I always (always) think of Bella's line in Twilight that she is, " . . . unconditionally, irrevocably in love with," Edward. Bella's irrevocable love is another subject for another day, but perhaps the best use of the word irrevocable is as it applies to motherhood.

I was about to say that I'd rather be at home today. I'd rather be in my pajamas, downing cup after cup of coffee. I don't know if that's even true, though. I have a daughter who needs to see her endocrinologist, & so to Jackson we go. She's mine; she is the irrevocable in my world, & I am on board for whatever that entails. I decided what I'd be doing today, on the first day of Spring Break, when I decided I wanted to be a mother.

I don't know if there will ever be a Day Without Diabetes for Reagan. A student recently sent me some promising information about trials that are yielding encouraging results for diabetics. Sometimes I read the details of these studies, & sometimes I don't. I am always going to assume, & want Reagan to assume, that her diabetes is a permanent part of her life until there is a concrete reason to believe differently. I don't want her spending her life waiting for a cure. I want her to live her life rather than anticipating A Day Without that may never come; I don't want her to suspend her happiness, realizing with regret one day that she has done exactly that.

When I sat down to write I had only one goal & that was to vent for a few minutes about the asinine Day Without Women. This has meandered into other corners of my mind, which is often an ancillary effect of writing. For obvious reasons I hesitate to compare motherhood to diabetes; I didn't sit to write with that intent, but it seems I've written myself into that corner somewhat & so I'll briefly address this. I do know a good bit about both. Both motherhood & diabetes are game changers for sure; both can turn on a dime. Both demand more of you than you ever thought you had in you to give. I don't want to further indulge this line of thought, other than to say - & I think this how I've stumbled into this analogous mess - the things that push us to our extremes, that reveal character, usually are not things from which we can simply walk away, not even for one day. The goal, ladies, is not to walk away from it all & watch the world burn in your absence. The goal is to shoulder the boulder, sew the seams, check the blood sugar, & get up & do it again tomorrow, thankful for the opportunity to do so, understanding that there are women who envy the dirty diapers, who envy the mess, who envy the stress.

We're closing in on six years together, oh ye faithful blog readers. You've likely picked up on the fact that I struggle mightily with my attitude at times. This one is more for me than for you, but as always, thanks for reading.

Email ThisBlogThis!Share to TwitterShare to FacebookShare to Pinterest
Labels: Diabetes