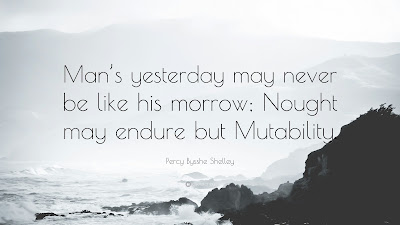 Good Monday morning. I'm glad you returned to me after last week's tirade about Christian Fiction. You can relax; there'll be no tirade today. Today is the final Monday in February. On Wednesday, we welcome March. March. The word has perhaps never connoted so much for me.

Last week, no longer able to ignore the steady forward march of the calendar, I handed each of my fifteen Advanced Placement seniors a manila folder on which I'd lovingly written their name with a Sharpie. The objective is to use the folder as a catch-all for handouts, notes, & other paraphernalia related to their upcoming AP Literature & Language Exam in early May. Understand that when I type the phrase early May my heart constricts. A rolling, collective whine rippled through the classroom as the folders & a few handouts hit the desks. I overheard phrases like, not yet, it's too soon. And it does feel too soon. It does. I then reminded them of their upcoming Spring Break, & of Easter Break, & of the two days they'll not be in school due to their junior/senior banquet (which is an Indian phrase that translates dances with no one), & the fact that a handful of them are regularly pulled from class for various field trips & service projects.

I remember. I remember well being a teenager & thinking the spring stretch standing between me & the summer was an eternity. It of course is not an eternity, & when you factor in the days we'll not be in class, & the weekends, we have precious few days left in class. We have precious few days left together, & that makes me want to squall. Ugly, ugly squall. And there will be squalling ahead; it is absolutely inevitable.

There's a line from Fitzgerald's This Side of Paradise that's been rolling around in my head for about month or so:

They slipped briskly into an intimacy from which they never recovered.

I've never read This Side of Paradise. I need to do so. I want to read it. Obviously The Great Gatsby is the novel most often attached to Fitzgerald's name, but I've read some glowing reviews of This Side of Paradise & it is on my list. Anyway, the line is one of my favorites. I love it. I think it's not a terrible descriptor of a shift that's occurred, that is occurring, between me & some of my students, a shift that, while I cannot pinpoint the moment it began, is, I think, a subconscious acknowledgement of & response to the ticking of the clock. And it must be acknowledged that they are seniors, & it's almost March, & whatever barriers of rigidity & formality may have once existed are now just tumbling down.

Between second & third hour high school students have a twenty minute break during which they can eat, drink, & be merry. They eat a late lunch, thus the mid-morning break. There are a handful of seniors who spend their break in my room fairly regularly. They've gravitated toward my desk of late, & we just sit & talk. They complain about their homework; they complain about their upcoming tests & projects. They complain about their job & their boss, if they have a job & a boss. They sometimes complain about their parents. I like sitting & listening to them. Sometimes I offer a word of encouragement or advice; sometimes I laugh until I cry because they are so funny. I feel a little like Jim & Cindy Walsh (of the original 90210 fame), happy I've created an environment to which teens feel comfortable fleeing & hoping Brenda doesn't turn up pregnant. On Friday one young man asked me what I was going to do with myself when they leave. Are you going to miss us? Are you going to cry? Yes & yes. A thousand times, yes.


Last August, Friday the nineteenth to be exact, I met many of these students for the first time; that is amazing to me now. The following Monday we trudged through our first full day of school together. There were awkward moments in those early weeks as we adjusted to the newness of it all. What's unfolded in the months since that hot Friday in August is not unlike the first of year of a baby's life, particularly your first baby. The year has been dominated by a lack of sleep, whining, & crying, but overshadowing it all is a pretty intense love you'd read about it, but didn't fully understand or even believe possible until you experienced it for yourself.

While this is not my first year teaching, it is, aside from a brief stint doing some student teaching circa 2003, my first time in the high school classroom. I was in a college classroom for a decade or so prior to last August. As an adjunct instructor I drove to work, walked in & taught my classes, & left. If teaching in the high school setting is akin to parenting, adjunct teaching is akin to babysitting in terms of what's asked of you - your time, your energy, your emotions.

Adjunct teaching got me out of the house, kept my mind active, padded my wallet with a little extra when I wanted something I knew would make Trey scoff, & it worked well for our family for several years. It was, in retrospect, a pretty easy gig. After the first semester or two of teaching Public Speaking, I was on autopilot, rarely needing to alter my notes & only feeling the pressure of time when I had speeches to grade. I could give my lectures in my sleep, & I often did in the months after Reagan was born & then again in the months when Henry was still nursing & Reagan was a newly diagnosed diabetic. Adjunct teaching required little of me, & with two small kids at home, I gave little, & I got little in return. I can assure you I never cried when a semester ended.

I taught in a variety of classrooms as an adjunct; they were all equally impersonal. The high school classroom is, like a newborn, an amazing blank slate (quite literally white walls on which I hung pictures of Ernest Hemingway). While students don't come to me free of baggage, free of preconceived notions about English class (or about me), I largely dictate the atmosphere in my classroom, beginning even with the curtains I searched for online & then hung back in August. I want them to feel at home there; I want their memories of that room, of their time with me, to be positive.

The fact that most of the memories I'll make with these seniors are just that, now memories, brings me to tears if I think about it too long. I never knew I wanted a classroom of my own in which I could hang curtains & pictures of Hemingway & quotes I love; I never knew I wanted to spend time with teenagers. There are a thousand things I didn't know in August. I had no idea how hard it would be, how much of myself - my time, my energy, my emotions - I would give, & perhaps most surprisingly, how willing I'd be to let those things go, & how much I'd get in return. Last week alone was payment in full for every hour of sleep lost, every moment of frustration, every emotionally draining day. I won't recount the whole week for you, but it was a good one, a satisfying one, ending with an emotional roller coaster involving scholarship news & the general agony of making decisions about college. Unless they're asking about comma placement, I don't always have an answer for them, but it's immensely rewarding to me that they ask, that they share their news with me, especially considering a handful of months ago I'd never had a conversation with most of them. That's the power of the high school classroom.

I don't handle change well (ask anyone who saw me in the recently reorganized local Target Saturday morning). I don't yet know if the end of every school year will be this emotional for me, or if this is because this group of seniors is my first. I suppose time will tell. While I hope for class after class of wonderful, special students, a part of me hopes saying goodbye isn't always this hard. I can't handle this year after year.

I've been thinking about how to tell my seniors goodbye. Obviously saying something in person is out of the question; I'd not get past the first sentence. I could write them a poem. I could video myself singing Whitney's "I Will Always Love You." I'm weighing my options. We aren't done yet; it is still February. What I am trying to do today & every school day that is left to us is to keep ever before my mind the sound of a peppermint being unwrapped. There's a dear man named George with whom my family has attended church for years. Back in the fall, right about the time I began my stint in the high school classroom, George's health took a turn for the worse. For years I'd listened to the sound of George unwrapping his peppermint in church, often piercing the otherwise quiet auditorium during a crucial moment of worship. During George's lengthy hospital stay I sniffed through more than one church service because the silence behind me was deafening. George is doing well now, & the sound of him unwrapping his peppermint is akin to Beethoven's Fifth; it is glorious, & when I hear it I thank God for George's recovery.

I love silence. I cherish it. I need it desperately at times. I need to be alone in my classroom & get work done at times, but soon the desks will empty for good, & the voices that have become so much a part of my life will grow silent.

Seniors, enjoy the time you have left with one another. It is fleeting. You'll miss people you cannot imagine now that you will miss, I promise. I'm so excited about what will unfold the next few months. I want so much to see you all dressed up in your dresses & your tuxes that I am conducting an extensive online search for a dress that falls somewhere between grandmother & teacher-having-mid-life-crisis, which are the primary dress options for a woman my age from what I can tell.

I leave you with Percy Shelley's "Mutability," which is on tap for the seniors this week.

I love you all, you restless bunch of gleaming clouds.

We are as clouds that veil the midnight moon;
How restlessly they speed and gleam and quiver,
Streaking the darkness radiantly!-yet soon
Night closes round, and they are lost for ever.


Or like forgotten lyres whose dissonant strings
Give various response to each varying blast,
To whose frail frame no second motion brings
One mood or modulation like the last.

We rest—a dream has power to poison sleep;
We rise—one wandering thought pollutes the day;
We feel, conceive or reason, laugh or weep,
Embrace fond woe, or cast our cares away;

It is the same!—For, be it joy or sorrow,
The path of its departure still is free:
Man's yesterday may ne'er be like his morrow;
Nought may endure but Mutability.