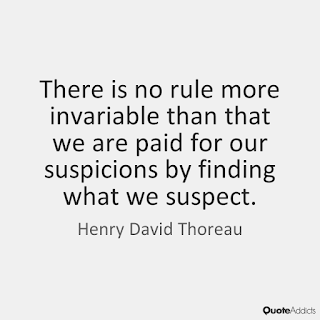 It is still July. Sigh.

Last week I used more brainpower than I likely ever before have in the month of July. 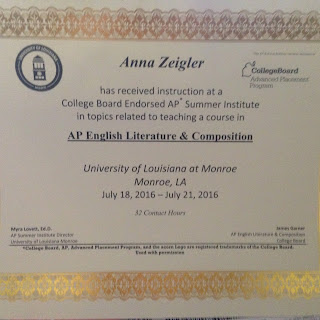 Buckle up, AP students. Buckle. up.

As I sit to type there's really no guesswork as to the focus of today's thoughts. I did one thing last week, & I think I did it well & with gusto. Last Monday morning I told you I was broadcasting live from inside my AP Literature seminar. I spent a grueling four days inside a frigid classroom with five other English teachers. It was so cold in the room that each time I exited the building a full minute lapsed before I began mentally cursing the July heat.

For four days, I rose early, showered, put on make-up, & did all manner of other things that just don't often happen in July, particularly not for four consecutive days. The purpose of all the early rising & the long days sitting in a hard desk, shivering, was to soak up all I need to know to successfully teach AP (which, if you've forgotten, stands for Advanced Placement) English.

I admit prior to attending I was skeptical about the seminar. Actually, they don't call it a seminar, it is an Institute. My skepticism about the Institute was unfounded, however. It was pretty amazing, & I don't often say that about anything that requires me to roll out of bed around five forty-five on successive warm July mornings.

I could not have been more impressed with the instructor. Not only has he taught AP English for years, every May he joins hundreds of other teachers to do the honors of reading & grading the AP Literature & Composition Exams. I know, right?! How cool. He knows so, so much.

He began the week with an inspiring (I'm not being sarcastic) spiel about stressing to students (& their parents!) that there is more to an AP course than the test score. Whether students earn college credit based on their exam score or not, they learn so much that will translate to better grades in college. I can personally attest to this.

Each day was dedicated to one of the four parts of the exam. Essentially he trained us in the same way the real graders are trained. Monday we focused on the one section that consists of multiple choice questions. Students are given a passage of either poetry or prose to read & have an hour to answer a handful of multiple choice questions. I still stink at analyzing poetry, by the way. I nailed the questions about the prose passages we read, but oh, the poetry killed my ego.

The remaining three days were dedicated to the three written sections of the exam. AP students have two hours to read a poem & respond to a prompt about the poem, read a prose passage & answer a given prompt, & finally they answer an open question. The open question is something like, "Often deception plays a significant role in works of literature. Choose a work from the list below (or another of equal literary merit) & explain how the author uses deception to further both plot and character development." The list includes obvious examples of epic deception, such as The Great Gatsby & Jane Eyre, but one of the changes on the exam since I took it is that students are not limited to the novels & plays on the list. They can address the open prompt using any work they choose, basically, as long as they deem it to be of "equal literary merit." We had some long, fun discussions about how to teach students what is, & what is not, of "equal literary merit."

The grading scale for each of the writing sections is 0-9. Along with four other English teachers, I was given a prompt (an actual prompt from a former exam) & then given a booklet of answers (actual answers from former students) to read & grade. I am serious as I can be when I say it was so fun to read the essays, assign them a score, & then see how the other teachers' scores compared to mine.

After we all shared our assigned score for an essay & justified it, the actual score the essay had been assigned by the AP readers was revealed.

After four days of this, we were all scoring nearly every essay within a point of its original score. It was as close as I'll come to a moment like this: 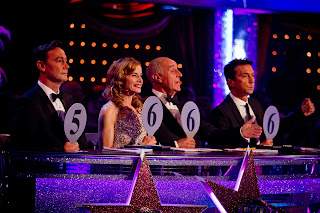 I learned so much in four short days. I learned to think like an AP reader, & perhaps more importantly, I learned to grade like an AP reader. These students write their answers longhand, & they are under some pretty serious time constraints, & thus you don't nitpick their essays to death. You just put a number at the top, & move along. Yes, atrocious spelling & grammar can be considered when grading, but the work is considered holistically, meaning (1) does the student answer the question(s) in the prompt, &, if so, (2) is the answer plausible, reasonable, or persuasive. Plausible answers fall in the five-six range, reasonable answers in the seven range, & the beauties, the ones that make you want to stand up & clap, the persuasive answers  land you in the eight-nine range.

Most of the nines we read were amazing, especially considering they were written by high school students under some pretty serious time pressure. I can write when the mood strikes, but I don't flourish under the pressure of time, especially when the topic is of someone else's choosing. I made it through college because most of my English courses were structured such that half (or more) of the grade was derived from a lengthy essay on a topic of my choosing that I took all semester to research & write. You pressure me, & things get ugly.

Mr. Garner (sorry, I don't think I've introduced you to him by name yet, but that's his name) encouraged us to adopt holistic grading across the board, in both AP & non-AP classes. Here's the beauty of holistic grading: I don't end up with a sore hand & dried out red pens. Whether an AP student or not, I was finally convinced last week that a senior in high school ought to be able to take a C paper & do some digging & soul searching & determine the reasons for the C. Sure, I might circle a word the first time it's misspelled, but not the subsequent ten times that follow. I'll show you one comma splice, but not rewrite the sentence for you every time you commit a comma sin. This topic of holistic grading was covered in the online class I took in June. I wrote one of my required  Journal Responses about how skeptical I was of my ability to let go of my desire to correct every error in my path, especially those on a student's paper.

During Mr. Garner's speech about holistic grading I thought of the above Thoreau quote. He (that's Mr. Garner, not Thoreau) was not, & I certainly am not, advocating chucking the grammar rules. As if. He did make two key points that have stuck with me. First, many teachers miss good writing because they're blinded by errors. When you attack a paper with your error-glasses on, the errors are sometimes all you see. The assumption that good writers also have a mastery of spelling & grammar is not always true. Second, once a student knows the rule, has been made aware of the error, & shown how to correct the error, there is no point in making the same correction repeatedly, or even calling each subsequent error to the student's attention. This saves me time & teaches the student that I am not going to clean up his room for him, no matter how much the mess drives me crazy! Another argument for holistic grading is that it mimics the grading practices of the majority of professors students will encounter in college. These people didn't earn their PhDs so they could sit up nights highlighting & correcting grammatical errors.

Interspersed among the AP exam grading drills we discussed effective ways to teach a novel, a play, a short story, & poetry. I desperately needed to hear the discussion on teaching poetry, & on teaching students how to effectively analyze poetry. Mr. Garner discussed the language of poetry, terms like diction, tone, anaphora, ballad, enjambment, assonance, etc., & explained how, as with any other language, students will not excel until they learn the language necessary to express their thoughts (at this point we segued into a lengthy discussion of language & 1984 which of course was amazing . . . you've no idea how exhilarating it is to be in a room with people who are intimately familiar with any possible literary reference you might make).

Are you still awake? There was no variety to my week last week. I didn't buy anything online. I didn't read much (fiction, that is). I didn't watch much of the RNC (& I think you'd likely prefer this dissertation on grading to my reaction to the RNC). I didn't even see the kids much until Friday (which was, of course, spent dozing & drinking coffee).

I know you may not be riveted by my revelations re: grading essays. I'll say this & leave you to your morning. Whether you're grading essays or dealing with students or people in general, it is worth remembering that we are paid for our suspicions by finding what we suspect. Grading essays is so incredibly subjective. There are so many rabbit holes you can jump down, & then, in the dark, you don't see what the student has done well. Plastered & highlighted at the top of the grading rubric on the written portions of the AP Literature & Composition Exam is the sentence: Give the student credit for what they do well. You can substitute a variety of nouns for student in that sentence, depending on your station in life. Don't crucify people over comma slices; don't miss beauty because you're too busy correcting spelling to see it.

And with that extended & perhaps convoluted metaphor, I bid you farewell until August.