The universe is wider than our views of it.

I suppose the best way to begin this morning, & to sum up the events of this past week, is to tell you that my mole & I are still one (my sister & her baby boy are still one as well, so an Ides of March birth remains a possibility).

You may recall last week's packed schedule. I droned on about it for quite a few paragraphs. It's good that I stressed over it, since, rather than executing my flawlessly designed plan for the week, the kids & I were at home Wednesday, Thursday, & Friday of last week; we did leave the house Saturday to meet my parents to see a movie because we had to get out of the house.

Monday did go as planned, which, in retrospect, was nice even if the plan was to be in Jackson at the doctor's office most of the day. Henry stayed with his grandparents & Trey & I took Reagan for her quarterly endocrinologist's appointment, which went well. Her A1C was a 7.7, which is down from last time.

Posey also had an appointment Monday. 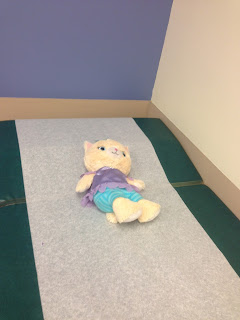 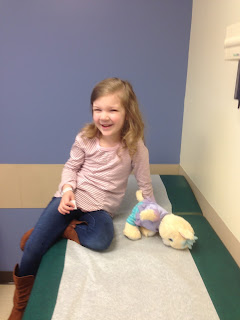 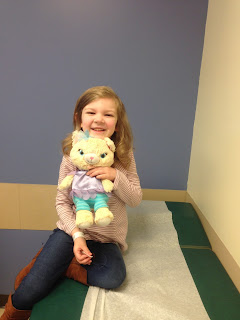 They did not do a blood draw as I expected. The appointment lasted nearly two hours, due in part to some troubles they had with the computer software that downloads information from Reagan's pump so the doctor can analyze highs & lows & trends & then make recommendations. Between you & me, the doctor didn't realize it's been a year since Reagan's last blood draw. As we were leaving I asked her about it; she checked Reagan's chart & confirmed that, yes, it has indeed been a year since the last blood draw but she said we could put it off until our June visit given we were all about an hour into lunch hunger pains.

I'm sure when June rolls around I'll hate that we delayed the blood draw, but I was happy to do it Monday. We were all so ready get out of there, particularly Reagan, knowing what awaited her. 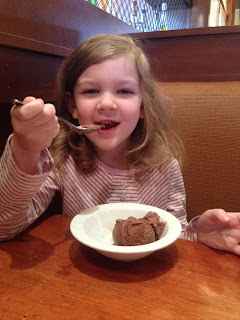 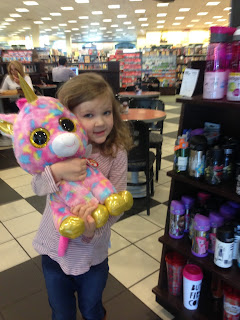 Tuesday was a typical Tuesday, right up until the end. Reagan went to school. I went to school. I got my hair cut. Ho-hum. I took my raincoat with me when I left the house Tuesday morning because everyone kept saying rain was on the way. I never mind rain, you know. It's relaxing. I love to sit & read or write when it's raining.


At some point Tuesday evening, the foretold rain began to fall. It was an insistent, perpetual rain. It actually seemed a little ominous, demanding your attention rather than softly caressing your window. I was dreading Wednesday morning because Trey was unable to take Reagan to school or do Cookie Wednesday duty, which meant I'd be dragging Henry along for these various activities in what everyone said was going to be steady, pouring rain.

A few minutes before six Wednesday morning, I got a text message from Reagan's WEE School teacher letting me know school was cancelled. In the fog of sleep, I thoughtlessly turned off my alarm & snuggled under the covers, thrilled my harrowing morning in the rain had been called off & looking forward to another hour or so of sleep, followed by several unhurried cups of morning coffee.

A few hours later, I rolled over in bed & reread my text message. It finally occurred to me that school had been cancelled because of rain. I mean sure, when the temps drop around here if there's one drop of moisture on the ground we call everything off, but rain? Rain, when it's seventy degrees?

My unhurried cups of coffee were not as relaxing as I'd planned. As I sipped coffee, I watched, via social media, as my hometown was plunged, literally, into chaos. School was cancelled Wednesday. And Thursday. And Friday. My appointment to have my mole removed was cancelled. Friday's scheduled conference was not called off, but only a handful of teachers attended as many were, & remain, busy salvaging belongings & cleaning the muck that's left when water recedes. I stayed home with the kids Friday.


The kids & I got dressed & left the house Saturday, meanwhile, Trey spent several hours Saturday helping a friend remove furniture from her flooded home. God bless him for trying to help others, but Trey's Saturday was a comedy of errors. While wading through someone's front yard, he stepped on a nail & had to suspend his rescue efforts to go get a Tetanus shot. He didn't tell me about the nail incident until later, but did call that afternoon to see if his wallet was at the house, as he couldn't find it (it was not at the house). I was rushing the kids out the door during the all too familiar Where's my wallet? phone call because we were headed to the theater.

On the way to the theater, I got a call from our kind home security folks who were eager to let me know the house alarm had been triggered. I gave the nice lady our password, assured her I was myself & not under duress, & begged her for five minutes to call my husband before they sent the cops to our house.

I was 100% certain Trey had triggered the alarm, considering the numerous times he's done so in the past, & also his general luck on Saturday. I was correct. He'd come home, wallet in hand, shielded from Tetanus, & decided to go up in the attic & check for water. You know the rest of this story. Open attic door before entering the house, trigger alarm, suffer heated conversation with wife, The End.

With Trey safely at home & the alarm situation diffused, my parents & the kids & I ate a lot of popcorn & some Junior Mints while watching Zootopia. We ended up in a 3D showing at a later time than we'd planned because people from far & wide were also tired of sitting at home with the kids on flood watch.

Here we are, looking as cool as you'd imagine. I'm likely texting Trey telling him not to attempt to climb the stairs while he's home alone. 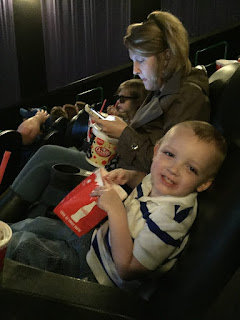 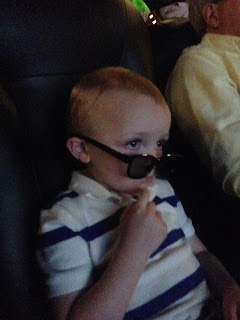 Zootopia is a pretty good movie. The star of the show is this tiny (animated) rabbit whose dream in life is to be a cop, a profession not traditionally occupied by rabbits in her hometown, Zootopia, a metropolis occupied by animals who speak & wear clothes.

It was fitting to end the week watching Judy, the tiny but ambitious rabbit. Despite all the time indoors last week, I didn't accomplish much during the days our regular routine was cancelled. I did read some. I wrote a little bit. I spent much of the time in my house watching the news & scrolling Facebook, which was constantly updated with photos & videos that often made me gasp, & always made me feel small.

Last week my ego was pounded into the ground with the rain. I essentially reenacted Thoreau's time at Walden Pond in my house, in my pajamas. With coffee. And my MacBook. I stared out the window some. I watched a little lake form on the flat of the green on the golf course behind the house. I thought about how green & vibrant our Daylilies will soon be. I contemplated life & my own insignificance. I laughed about man's futile attempts to control his environment.

My editor & I did arrive at a book blurb we find satisfactory. We had a brief discussion over the addition of the word for. I am serious. We exchanged a few emails, decided we'd nailed it down, & I sat back & thought, I have found my people. People who grapple over a preposition. She's right; it is needed exactly where she suggested its insertion. This is what I know, what I love. Words, control, precision.

The world outside of my word processor is sometimes quite scary. I often live under the illusion that I have some measure of control over it, but alas, I do not. The universe is indeed wider than our views of it; Thoreau & I reached the same conclusion after our meditative experiences. Every now & then the day to day comes to a standstill. You look at all the items carefully written on your Pottery Barn chalkboard & you turn & look outside at the ceaseless rain that so many would've given anything to stop, & you say, Oh. Oh that's right. I walk around conducting the show, directing traffic, making lists, buying groceries, checking blood sugar, teaching, & reading, & writing, & trying to make a mark somehow. You know what will make all of that seem silly & insignificant? Twenty inches of rain. The frightening swell of water over which you have no control.

Man's efforts to tame nature are absolutely everywhere in literature. I like to read this sort of thing. I like to analyze it. It's quite a different feeling when it leaps off the page & you watch friends try to save their homes, their belongings. Melville wrote about a giant whale, but I wonder if he ever considered a scene in which men hastily fill bags with sand & build a fortress around their homes, their possessions, while Mother Nature quite literally pounds them on the back, mocking their efforts.

It was with all this on my mind that I sat & watched Judy on Saturday. Judy is a tiny rabbit. She's expected to follow her ancestors' footsteps & work in the agriculture industry, but she wants to be a cop. Judy is, at times, daunted by the grand scale of her world, but she keeps plugging away, even when she's given a lame parking attendant assignment after (spoiler!) finally earning her police rabbit badge. You've seen these movies, & so you've likely got a good idea how this story unfolds. Judy can't do it all. Judy needs some help, but she makes friends along the way & proves herself to be an indispensable member of the Zootopia police force.

Take a lesson from Thoreau. Recognize your limitations; spending time in nature is certainly one way to do this. In the confines of our own homes, our cars, & the familiar  spaces in which we often find ourselves, we can seem large. Important. Step outside. Watch Mother Nature roar next time you need a dose of humility.

Take a lesson from Judy. She is given a healthy dose of humility her entire life. Nature gave her a dose of humility. She can't take a step without someone telling her how small she is, how silly her dreams of being a cop are. She knows her limitations. She doesn't despair, though. She knows she's a small cog in a monstrous machine, but she doesn't let the machine eat her; she keeps plugging away, & the machine is better for her efforts.

Alas, this is where I find myself, somewhere between the lesson of Thoreau (I am small, the world is wide & powerful), & the lesson of Judy. I almost wrote nothing today. Seriously. I am mentally flummoxed, & also physically tired, too, given the hour I lost & am powerless to recover. As of now, I am scheduled to return to the classroom tomorrow morning. My mole, which was given a reprieve last week, is scheduled to be sliced off Thursday afternoon, & I guess I should say, the Lord willing.