It may be raining,
but there's a rainbow above you.


One of the first things Trey ever bought me was The Eagles Greatest Hits: Volume II. This was in the late nineties; I believe I owned the album on tape & he bought me the CD. The cassette tape became problematic when I began driving a car that only played discs. We were not dating at the time, but Trey insisted we go to Wal-Mart & buy the CD so I wouldn't have to face a traffic jam sans the ability to listen to "Hotel California" at will. I'd like to think he insisted on the Wal-Mart trip because he thought I was stunning & was seeking ways to spend more time in my presence, but he has always loved the Eagles & there was a genuine evangelistic zeal on his part.

I'm trying hard not to drone on about all the things about which I'm bitter on this cold Monday morning. To give you a sense of my mood: I had some furniture delivered Friday & I haven't even loaded the pictures I've taken on the computer so that I can share them with you & tell you about my living room makeover.

The book club meets tonight & after that I will set The Screwtape Letters aside. I've read it & then reread certain letters, & while it is useful, it is probably wise to limit time spent reading letters penned from the perspective of a minion of Satan, especially when other things in life get you down, like Glenn Frey's passing, Donald Trump, & a few students who, two weeks into the semester, have already revealed themselves to be constant emailers.

Mrs. Zeigler,
Do u have our speeches graded yet? I thought maybe u graded them in the hour since I last emailed.


Dear Student,
No, I don't, because instead of grading, I am answering emails & pondering the demise of the English language.

I feel like there's an ominous tinge to the world, a filter I want to attack with Windex & a roll of paper towels. I often wonder if there has always been so much sadness, so much tragedy, so much cancer, or am I simply exposed to more of the bad news, to people's personal stories, because of the Internet? If you spend too much time on Facebook you begin to think no child (& no dog) is safely at home; have there always been so many missing people, missing animals? Lost, lost, lost.

Before I had kids I watched several television shows I no longer watch. These include Forensic Files & Law & Order: SVU. For practical reasons I just don't watch much television right now, but even if I had the time, I can't stomach the legal dramas & missing persons shows, whether based on true stories or not, because it is too much reality for me. It is your child's face, every time, once you have kids, & it's just not possible to watch anymore. Give me Stars Hollow, give me Friday night dinner with Emily & Richard, give me coffee at Luke's, please & thank you.

Last week I was gutted by the story of young Noah Chamberlin, the toddler who disappeared in woods near his Tennessee home & was found, deceased, a week later. I finally quit reading news updates because attached to each one was a picture of his face. I just had to cut myself off.


Yesterday my mother & her sisters drove to Texas to say goodbye to a cousin who is dying of cancer. I could list other heartaches, other things on my prayer list, that I learned about via social media just in this last week. All of the above was on my mind Friday night while I watched approximately fifteen episodes of Gilmore Girls. 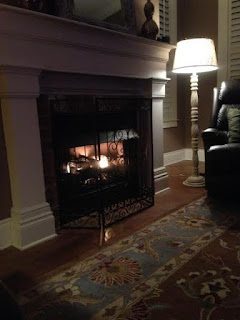 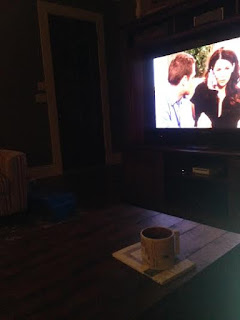 It was still on my mind Saturday morning when I awoke, alone, in my freezing house. Trey & the kids slept at his parents' house Friday night while I stayed home & looked at my new living room.

Saturday morning I shuffled into the living room with my coffee &, after I'd thawed a little in front of the (remote controlled) fire, I reread the sections of the The Screwtape Letters I'd fallen asleep reading the night prior.

Here's what I read.

The truth is that the Enemy, having oddly destined these mere animals to life in His own eternal world, has guarded them pretty effectively from the danger of feeling at home anywhere else. That is why we must often wish long life to our patients; seventy years is not a day too much for the difficult task of unravelling their souls from Heaven and building up a firm attachment to Earth.

This, indeed, is probably one of the Enemy's motives for creating a dangerous world - a world in which moral issues really come to the point. He sees as well as you do that courage is not simply one of the virtues, but the form of every virtue at the testing point, which means, at the point of highest reality. A charity or honesty or mercy which yields to danger will be chaste or honest or merciful only on conditions. Pilate was merciful until it became risky.

Ah. Someone is trying to unravel my soul from Heaven. I knew this. I too often forget that God is guarding me from feeling at home anywhere other than Heaven. The Lord doesn't want us to be too comfortable here. Often those of us who live exceedingly comfortable lives need reminders that, despite what Belinda Carlisle claims, & despite the (failed) experiments of dictators & politicians & scientists, we'll never make Heaven a place on Earth; by definition it is not possible because Satan roams the Earth.

I listened to the Eagles all last week (the kids were thrilled). I've quoted it above, but "Desperado" isn't my favorite. It's not a bad song, but it's no "Best of My Love" or "Lyin' Eyes." As a quick aside I'll tell you that I think "Lyin' Eyes" is one of the best songs ever written; it tells a story some authors would need four-hundred pages to tell. How can you not love a song that begins, City girls  just seem to find out early / How to open doors with just a smile.

Anyway, "Desperado" is said to be the first song Henley & Frey wrote together, & the line above struck a chord with me last week as I had so many unanswered questions about the sadness & tragedy that unfolded with the week.

Thursday morning I drove to school in a heavy downpour. I was not upset that it was raining. It fit my mood, but more importantly, I knew it would serve an altogether different purpose as my students were slated to give their first speech of the semester. I found out Thursday who was not going to be deterred by the driving rain & dropping temps.

I don't doubt that God sends the rain for the same reason I was not unhappy it was falling in sheets Thursday morning. We know from Abraham's & Job's stories that the Lord can & will put people's feet to the fire. As is expressed in Lewis's letter quoted above, God has His reasons for subjecting us to "the highest reality."

The last few weeks brought with them heaping doses of reality I didn't want to swallow, seemingly in successive, unrelenting waves.  They left a bitter taste in my mouth, but you know what? I've prayed more & my awareness of how sweet Heaven will be has been renewed. They were, & remain, stumbling blocks in my sometimes cushy path, reminding me that I am a foreigner in a foreign land.

Remember Pilate, who withered under the pressure when it mattered most, & let his failure inspire you. Remember Abraham, who stood firm in the face of the unimaginable, raising a dagger to slay the son he'd waited years to love. Remember Job, whose own wife advised him to curse God & die. When you feel a little lost, remember that you are not meant to feel at home here, the discomfort serves a mighty purpose, because this is not your home, & the Lord is continually working on your behalf to ensure you are not unravelled from Heaven. That is an awesome thought.

Goodness, this is heavy. I don't even have any pictures of the kids (they remain awesome, of course). We'll do something fun next week, like talk about my new furniture or Trump or something. The book club is reading Under the Never Sky in February. I've not read it yet, but am told it's the first book in a young adult dystopian series. The friend who recommended it to the book club says the male lead is one of her, "favorite book boyfriends," so I am eager to begin the series. I say all that to let you know it's unlikely this book will inspire the serious & sometimes somber thoughts I've laid on you these past two weeks.

Here's to February, a new book series, & a book boyfriend I'll soon meet who has considerable competition from a blonde baker named Peeta, a teenage vampire named Edward, & a Russian soldier named Alexander if he is to land a spot on my "favorite book boyfriends" list.