Late Nights with Yeti and Nietzsche

When we are tired,
we are attacked by ideas we conquered long ago.

I share a birthday with Friedrich Nietzsche. This fact eluded me for thirty-five years, but I stumbled on it last Thursday when someone I follow on Twitter was tweeting Nietzsche quotes in honor of his birth on October 15, 1844.

Nietzsche was a German philosopher whom I admire, but do not fangirl over. I suppose I have a healthy but distant respect for him. He was a smart man, but he was too deeply entrenched in the "there is no absolute truth" camp for my taste.

I took a philosophy class as an undergraduate & my professor adored Nietzsche. I suspected then, & still do, that he simply loved saying the name Nietzsche, & that was at least in part a reason for his proclivity to throw Nietzsche's name out any chance he plausibly could.

If you missed my farewell to thirty-four, it can be found here. I'm settling in to thirty-five. This is going to be a quick update on a few goings on about which you may or may not already be in the know.

To begin, I received a pair of Yetis for my birthday. I know it sounds like I'm about to try & breed something, but I assure you, my breeding days are over. 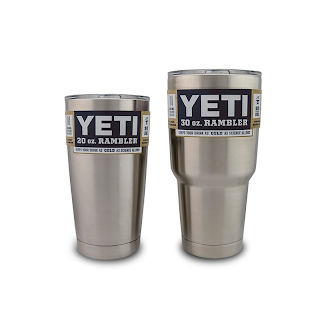 At some point last week a lengthy conversation developed on my Facebook page, & while I don't recall the original topic, the conversation concluded with several people recommending I purchase a Yeti to more fully enable my coffee-drinking habit. A Yeti is a beverage container that purports to keep hot beverages hot & cold beverages cold for long periods of time.

Taking their cue, my mother & mother-in-law both got me a Yeti for my birthday, so now I can leave the house with fifty ounces of steaming hot coffee that stays hot for a long, long time. And it really does. I can already tell the Yeti is skewing my sense of the passage of time.

In addition to the two Yetis, I received some gift cards from Trey, one of which is a Pottery Barn gift card. His timing is perfect, as my mother & the kids & I are scheduled to depart for Dallas, home of a handful of Pottery Barns, later this week. I'd much rather use the card in person, otherwise Pottery Barn's astronomical shipping charges will eat up nearly the entire gift card amount, & I'd end up spending a ton of money to use the gift card, which I know is their plan.

So, here I sit, officially thirty-five, the owner of two Yetis & one Pottery Barn gift card, & I think, what's next? For starters, I suppose it's about time to officially announce on the blog what will likely be anticlimactic news as I think many of you already know, but I am going to be an aunt again; my sister is pregnant. One of the reasons for our upcoming trek to Dallas is to attend a gender reveal party for my niece or nephew, who's scheduled to arrive sometime in March of next year.

Also on the agenda for Dallas: attending my niece's second birthday party. Maisie will turn two tomorrow, & on Friday her mama will turn thirty-three. In the short time we'll be in Dallas, we're going to celebrate the birthday girls, find out baby Griffin's gender, & blow my Pottery Barn gift card in grand style. And yes, both my Yetis will be making the trip with us.

I'm trying to prep for the trip now, but basically that's consisted of trying to dry up the endless flow of  - - forgive me - - sinus drainage that's plagued me for about a week now. 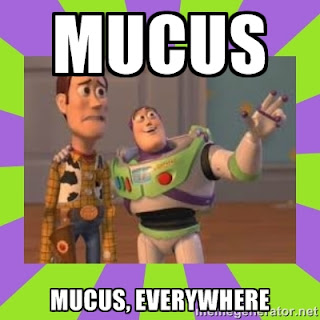 I spent my birthday as a mute. Last Tuesday when I was teaching I could tell my voice was going. By Thursday morning, it was gone. Had I been able to rest it completely on Wednesday I may've been able to plow through Thursday in class, but alas, there's no such thing as vocal rest (or any rest of any sort at all) when you have two young children.

I staggered through my first class Thursday, doing my best Ariel impression. 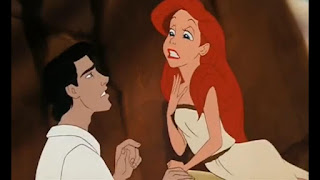 I'd typed out some instructions prior to class that morning & posted the document on the overhead screen for them to read. They watched a couple of speeches, & then had an assignment that likely made many of them wish I could speak so they could passively sit & pretend to listen to me.

After my first class I went & nonverbally begged my supervisor to have someone else give my second class the assignment. He was sympathetic to my inability to communicate verbally, but I think   my back-to-back-to-back-to-back sneezes convinced him of the seriousness of my condition, & he graciously dismissed me.

On Friday, my second day as a thirty-five-year-old, despite my continued sinus troubles, I showered & dressed & put on all the make-up because I'd been promised dinner at a fancy restaurant. Trey & I celebrated six years of marriage on Saturday, October 17. I warned him early last week that if he wanted to go out to dinner for my birthday &/or our anniversary we were going Friday night because I wasn't going to be anywhere other than parked in front of a TV Saturday night. What can I say? Romance is great, but so is an undefeated LSU team that is running AND passing the ball with success (& what's he got to complain about? I am shaving my legs constantly despite the falling temps!).

Over dinner we discussed what the book club's reading, which is always a fun discussion to have with Trey. Like my father, Trey always has suggestions as to what the book club ought to read next, assuming of course you set aside the fact that we're a group of women with a median age around thirty. Thankfully my voice was returning to me in increments & I was able to actively participate in the conversation. Trey never asks what the book club's reading when the book of the month is a lengthy war novel, but he never fails to stick his nose in the book club's business when we're reading something that's unlikely to be found on a college syllabus, as is the case this month.

Last October we read The Selection series by Kiera Cass. It's a young adult series, & it is pure fluff. I'm going to tell you straight up that sometimes you need to read fluff. I rather enjoyed these three novels & am now reading the fourth book in the series, The Heir, which is the book club's October book. We had a heavy reading load this summer (all seven Harry Potter books . . . & some of them are really long!), & then we read Winter Garden, which is a tearjerker. What's on the other side of The Heir is perhaps the true reason we need a light October read, & that is the final Mockingjay movie we'll go see together in November. Cue the feelings.

After gumbo & steak & vegetables & potatoes & a thorough book debate, we were too stuffed to eat dessert, or further bicker over books. We decided we wanted lattes. We sipped our lattes & felt very fancy as we slowly drove toward home & the energetic young ones awaiting us.

All last week I took a variety of medication for my sinus predicament. I usually try & stay away from straight-up expectorants, as they often make me cough & gag uncontrollably & also make me feel weird. I thought my chest was beginning to feel tight Friday night, & so against my better expectorant judgment, I took some Mucinex.

A few hours later, I was in bed feeling predictably weird. Everyone was asleep but me. I piddled on Facebook (which I am sure you know translates to scrolling through people's pictures). I browsed Twitter & found it to be predictably droll. I read a little Nietzsche. Also, I continued to feel weird.

Eventually I queued up Netflix & turned on Bridget Jones's Diary for background noise & started to write. In a relatively short while, I was 1,500 words deep in a book that's been niggling me forever. I've put it to bed repeatedly. I've purposely refused to name the characters, because oh, once they have names, they are off to the races.

I was fifteen the first time I saw Daniel Dean.

And the closing line of chapter one reads:

Ooooh now you're totally intrigued! Or not.

So, Mr. Amazing Romantic Hero's name is Daniel, & for now his last name is Dean because alliteration is awesome. He is not an American literature professor & I am not sure but I doubt he'll be wearing many argyle patterned sweater vests either. I'm getting to know him & my narrator, who you may've noticed is speaking in the first person. They say first person is the easiest perspective from which to write, the most intimate, but we shall see. The only other novel I've written is told in third person. The drawback to first person, as I see it, is that there's no way to get inside Mr. Daniel Dean's head. We can only know what he's thinking via his words & actions . . . & brooding stares, inquisitive looks, etc. Maybe Daniel will share his intimate thoughts with Miss First Person Narrator via a Hallmark card to which the reader is privy. The possibilities are endless.

I've no idea what came over me Friday night. I'd just read the above Nietzsche quote prior to my writing sprint. Maybe it was losing my voice, or exhaustion from constant coughing, or the constant stream of hot decaf from the Yeti, or the Mucinex, but I enjoyed writing more than I have in a long time. Maybe some part of my subconscious was freed when I turned thirty-five. And plus, the Mucinex.

This is another bit of Nietzsche wisdom I ran across:

No one can construct for you the bridge upon which precisely you must cross the stream of life, no one but you yourself alone.

If you want to try & write a book one day, kids, do it. You may never finish it, & that's okay. Just try. You can think about it & outline it & beat the idea up over & over in your head, but at some point quit doing that & sit down & write & see what happens. Start reading the book you've put off reading because you think it's too long or you won't be able to understand it. Read the first sentence, & then the next.

Sometimes when you are at a low point, be it physically or emotionally, you are, yes, more vulnerable, but also unwilling or unable to hold on to the mental blocks & excuses you've used to put off doing whatever it is that scares you, that you think you don't have the time or the skill to accomplish.

You may've noticed I didn't take any pictures last week. I was busy trying to communicate with scowls & hand gestures, or blowing my nose. Do not worry, though. Pictures will no doubt be taken in Dallas, & if I feel as I normally do after traveling with the children, pictures may be all you get next Monday, unless of course I take some more Mucinex & am again inspired to write, well, a novel.