To take a photograph is to participate in another person's
mortality, vulnerability, mutability.
Precisely by slicing out this moment and freezing it,
all photographs testify to time's relentless melt.


You've no idea how close you came to not reading this.  Something significant is happening in my life.  It is time consuming, it is wrenching all the feelings from me, & I was this close to not even sitting & blogging, so reluctant was I - - am I - - to tear myself away from my newfound love.

A few kind, Christian friends have been gently nudging me in a certain direction for a few months.  I have now caved & given in to their pleadings, & am addicted to a potent form of crack known on the street as Gilmore Girls, which is currently streaming on my enabler, Netflix, who offers me one forty minute fix after another forty minute fix . . . I mean I don't even have to pick up the remote & push a button.  If Bella is Edward's brand of heroin, then Luke Danes is my crack.  You know what I mean.


Alas, something perhaps more beautiful than Luke Danes has me sitting here, typing away.  I cannot let another day lapse without putting something on the permanent record in regard to last week's house arrest weather.  In four years of blogging, I cannot recall ever thinking, I simply must sit & write about the weather.  And you know, it's good that there is such an obvious topic about which I need to write, because between Gilmore Girls, last week's book club meeting during which Karen Kingsbury's Redemption was discussed, & my permanent mental residence in an underground silo as I continue to plow through Hugh Howey's Wool trilogy, I would not have been able to arrive at a topic, at least not one that was coherent, had the weather not presented itself in such grand fashion.  In all likelihood, one day, a blog will come your way re:the Kingsbury book, & one day, I will be ready to openly discuss my time underground, courtesy of Mr. Howey.  Today, however, is not that day.


Today is also not the day I will deal with my rage over the government takeover of the Internet, although perhaps I ought to get on that soon, because once they begin regulating everything in that special way the Feds have of regulating everything, they may well come after me.  Mark it down: Thursday, February 26, 2015, the day the Internet began its slow, tortuous, writhing death at the hands of three out of five loons on an unelected panel.

As Ronald Reagan once warned, "Government's view of the economy could be summed up in a few short phrases: If it moves, tax it.  If it keeps moving, regulate it.  If it stops moving, subsidize it."  The Feds are on step two at present re:the Internet.  One day in the future, when your Internet is slow as molasses because the Feds are doling out bandwidth like they dole out healthcare, you'll complain . . . but then you'll be forced to subsidize slow Internet for those who cannot afford their own slow Internet, & you'll long for the days when you only had to pay for your own slow Internet.  You think I am kidding.

Now that you've been fully apprised of what is not on today's agenda, we'll move ahead with the business at hand.  I came across the above Susan Sontag quote a month or so ago.  I may've made some deep, throaty hmmm sounds when I read it.  When I stumbled on it, I didn't know I'd soon be having endless conversations with my four-year-old daughter about the various forms of precipitation, & holding her little hand as we watched her snowman slowly fade away.  Do you want to build a snowman? is such a fun lyric, such a fun concept, right?  Do you want to watch it slowly, agonizingly trickle to nothing right outside the kitchen window over the course of four or five sad, sad days? is noticeably absent from the Disney song that inquires about the erection of a snowman.


As we've watched Time take its toll on our snow friend, Ms. Sontag's words have come to mind again & again as the inevitable melting process unfolds, tiny rivulets making their way to the soggy ground, carrying with them memories of a rare Louisiana day spent in the snow.  Here's what remains, the moments I sliced out & froze . . . many, many moments: 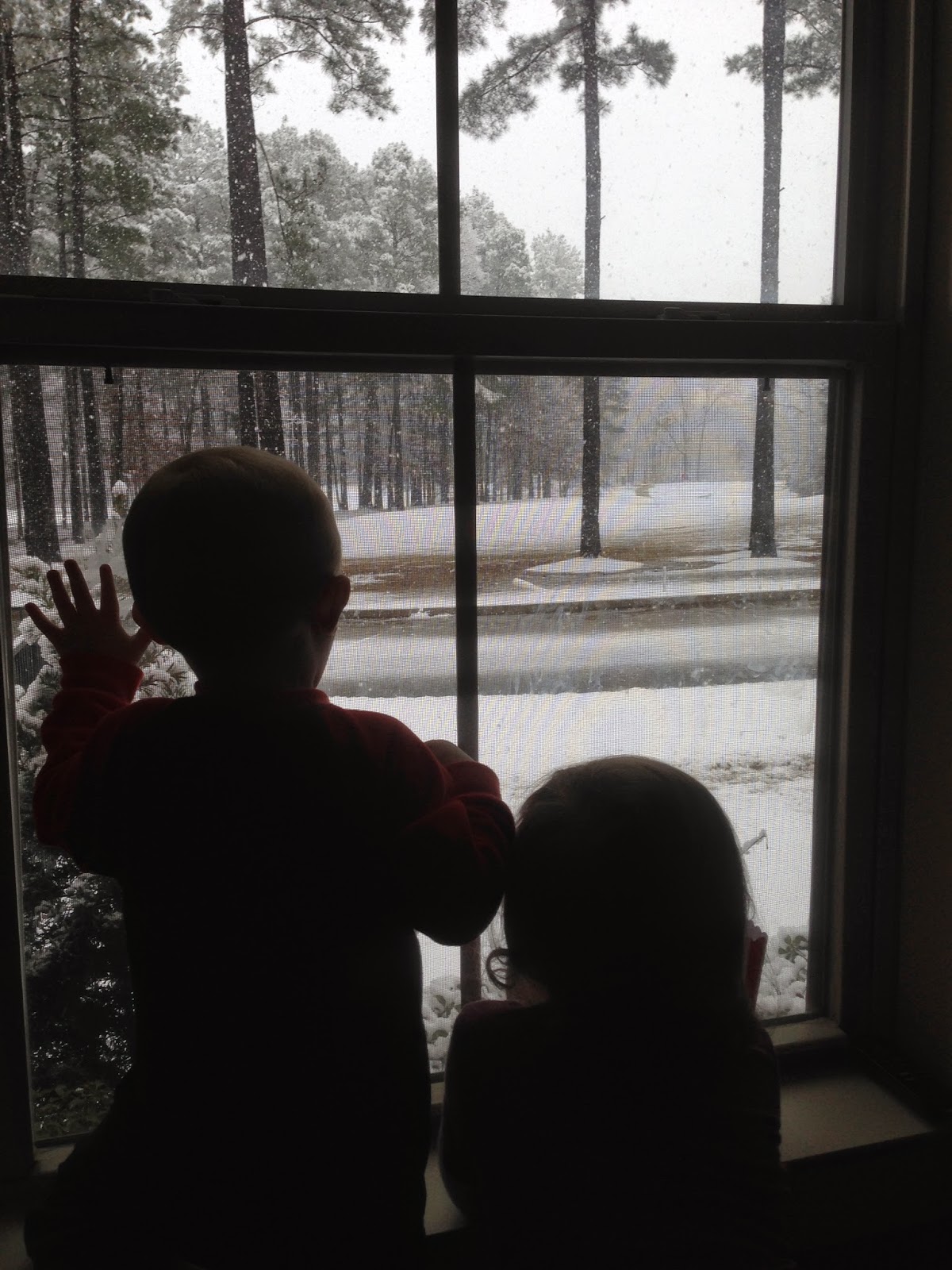 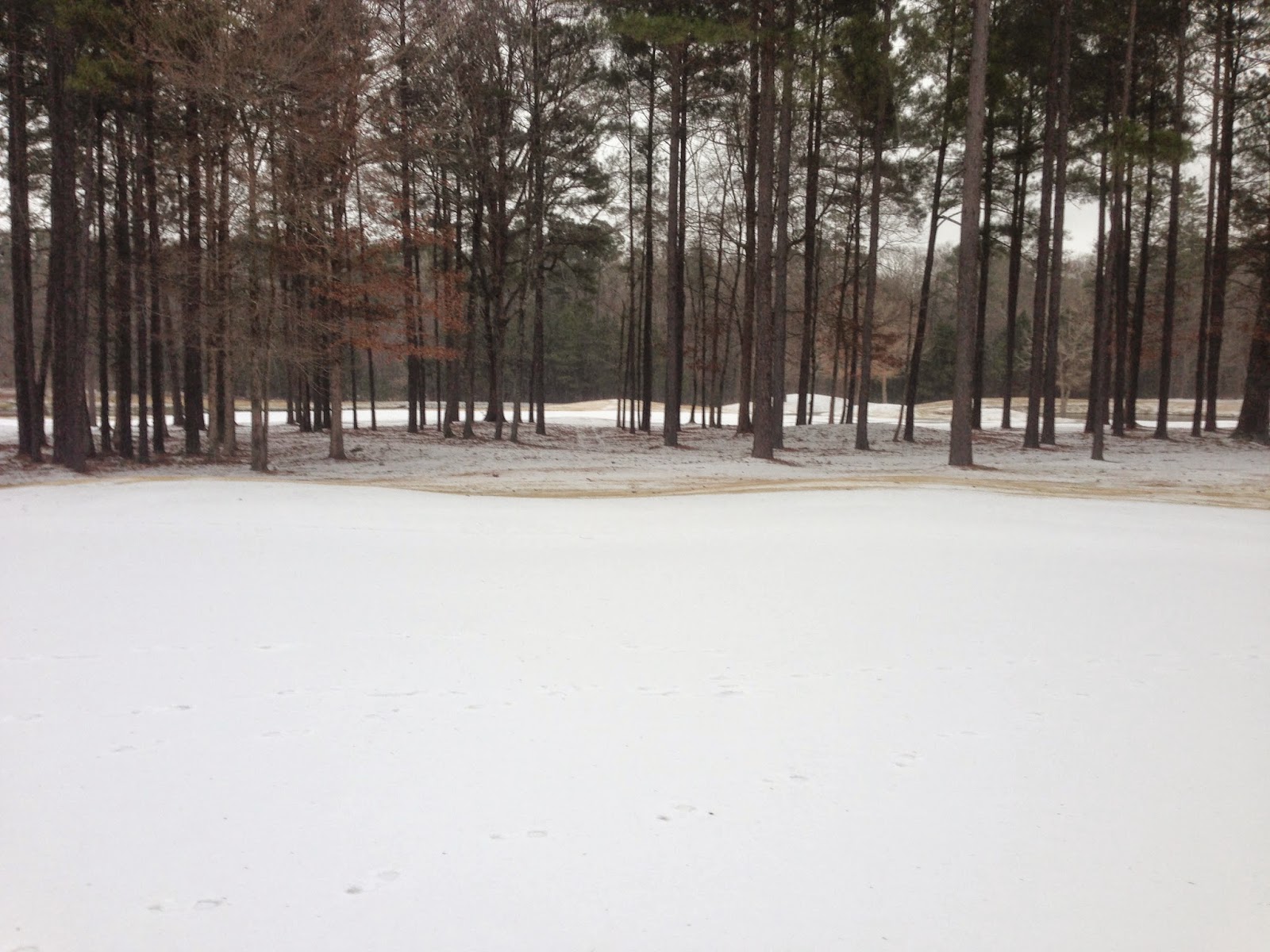 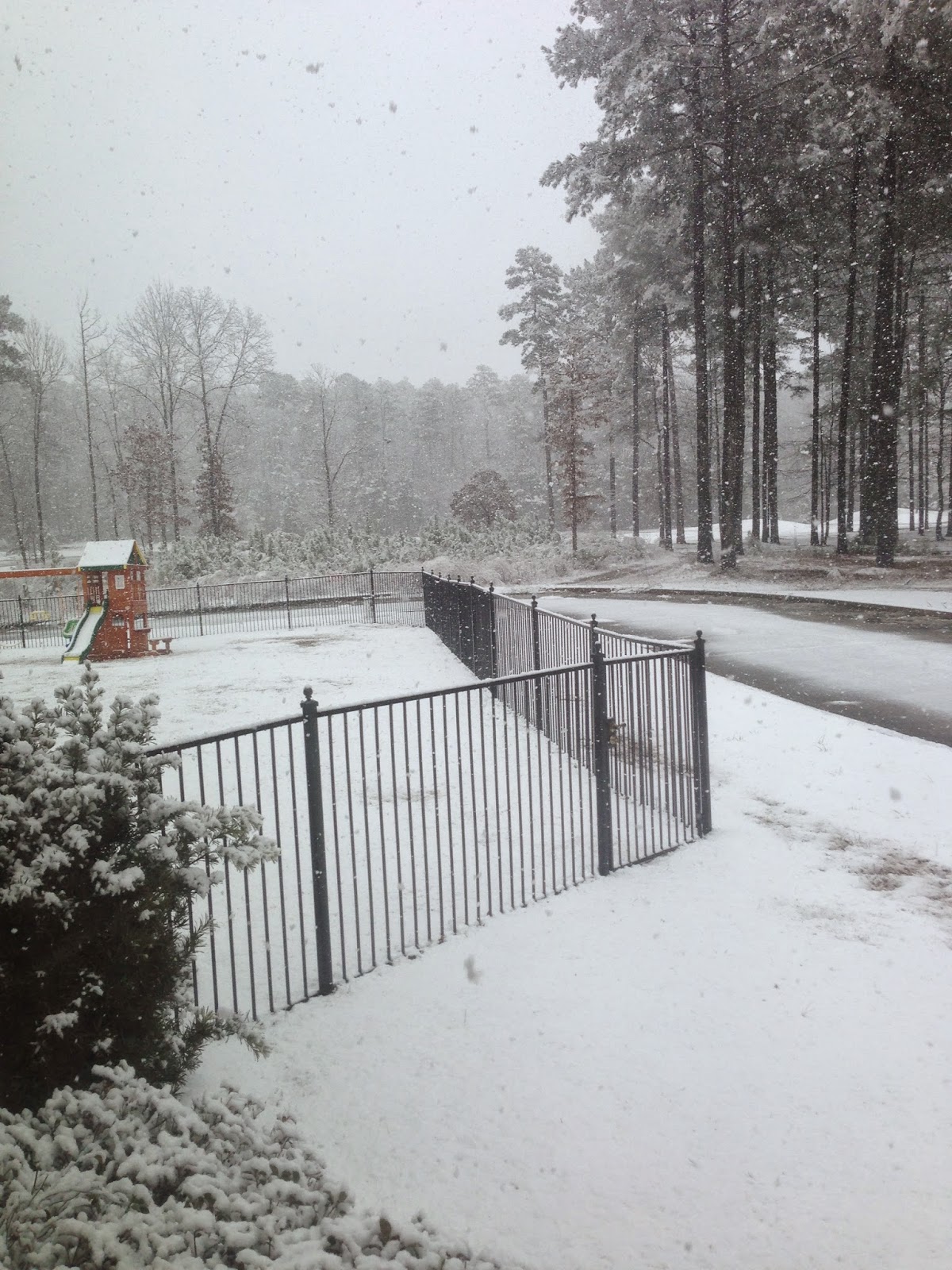 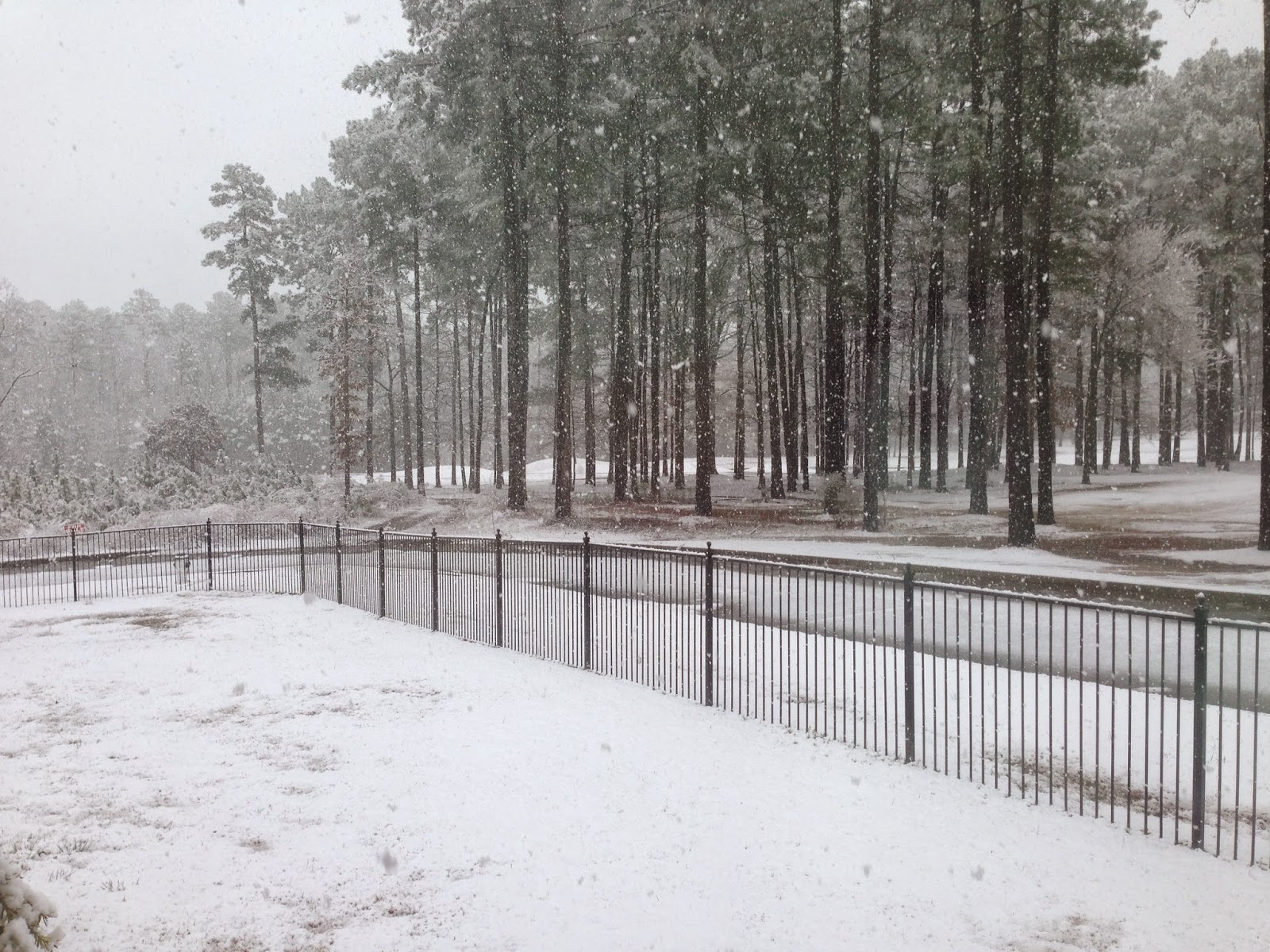 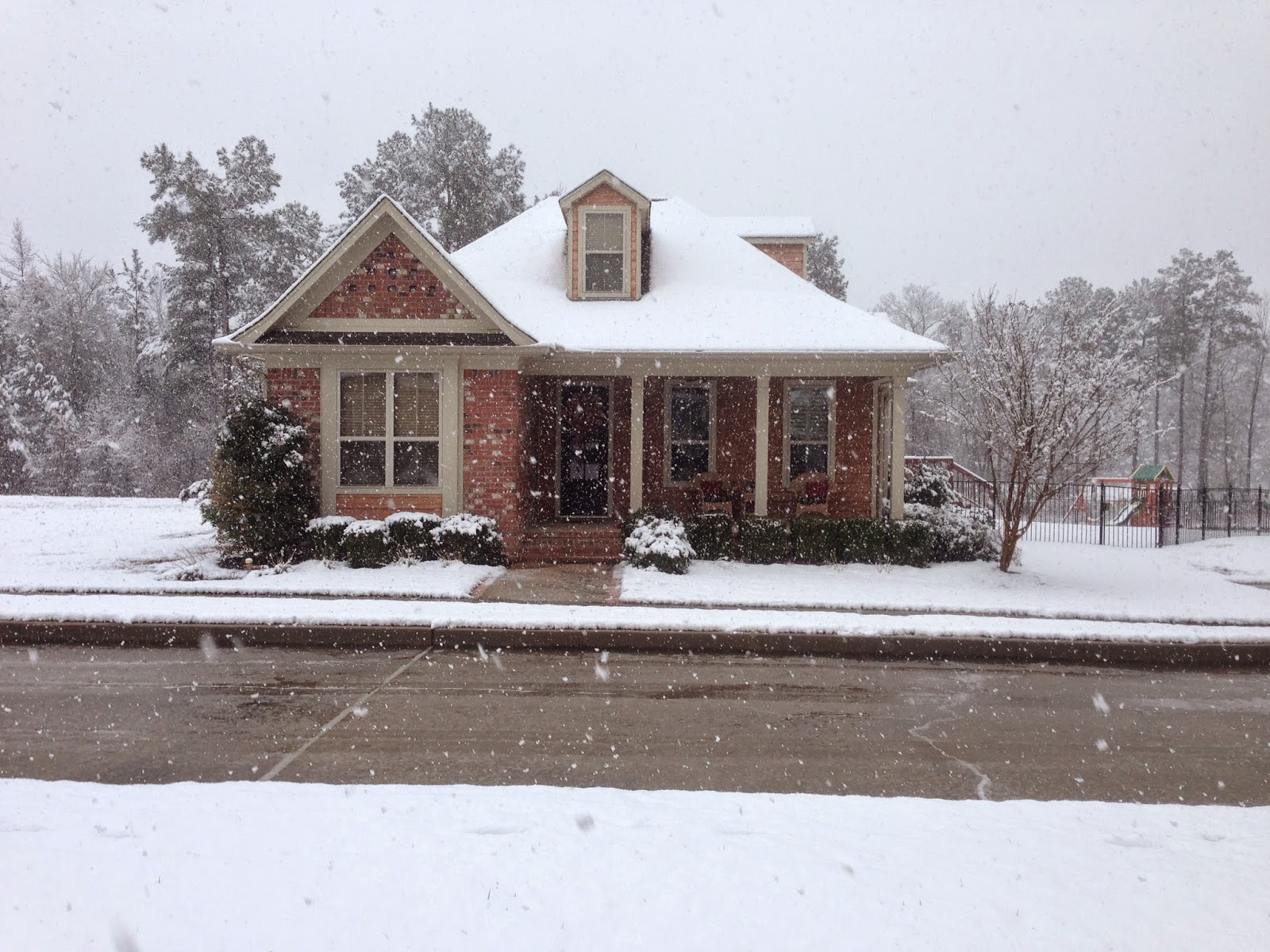 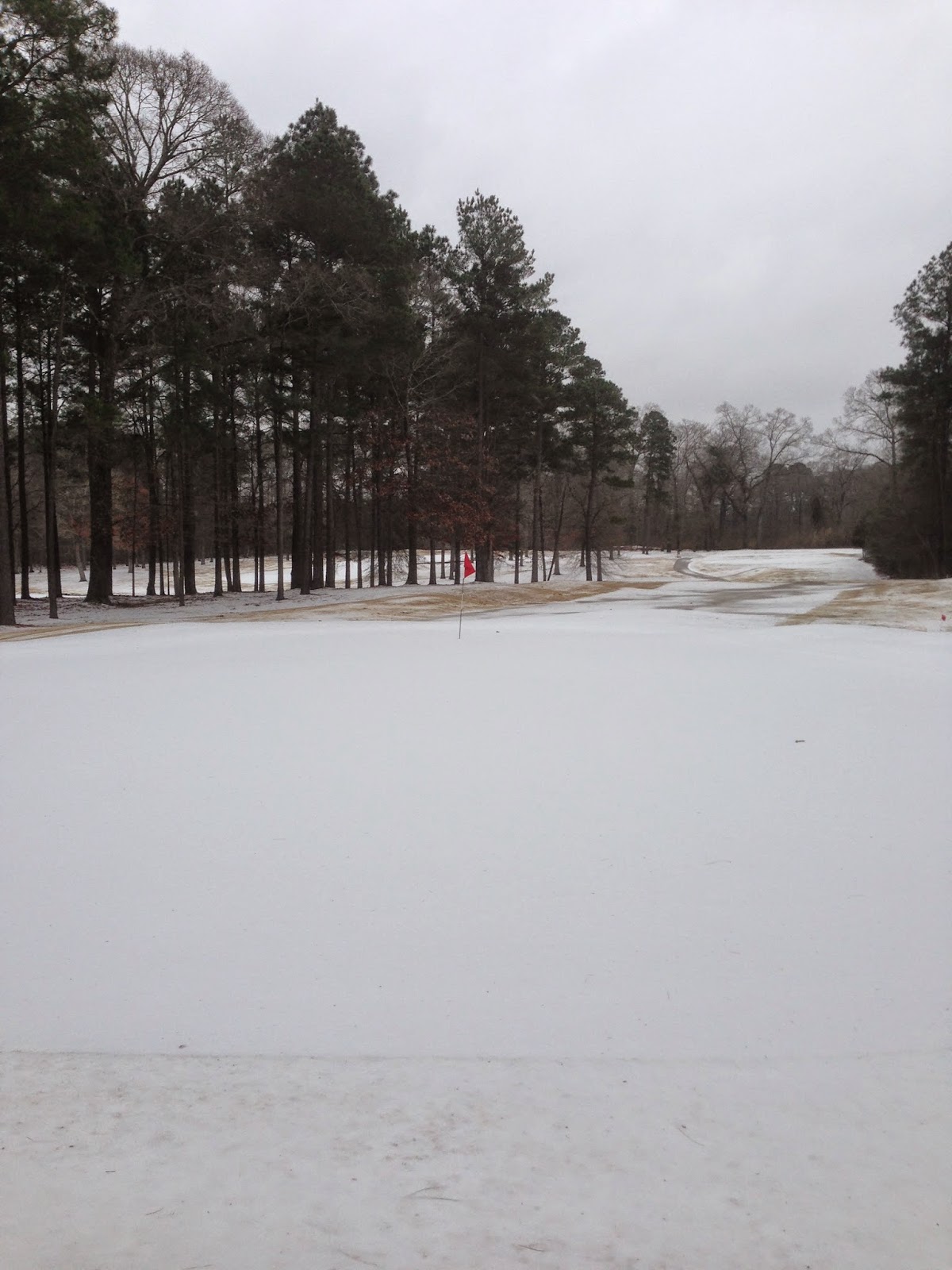 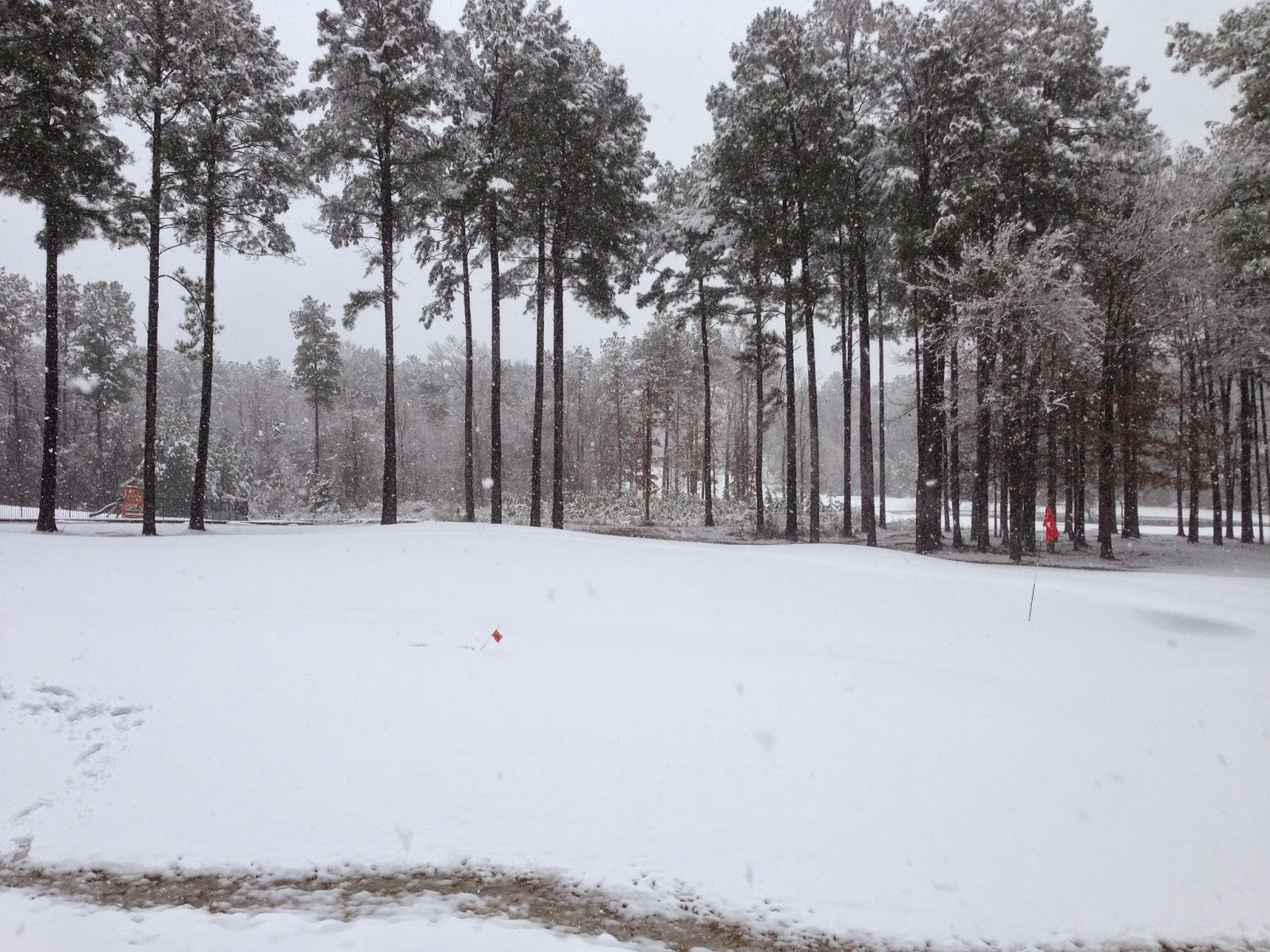 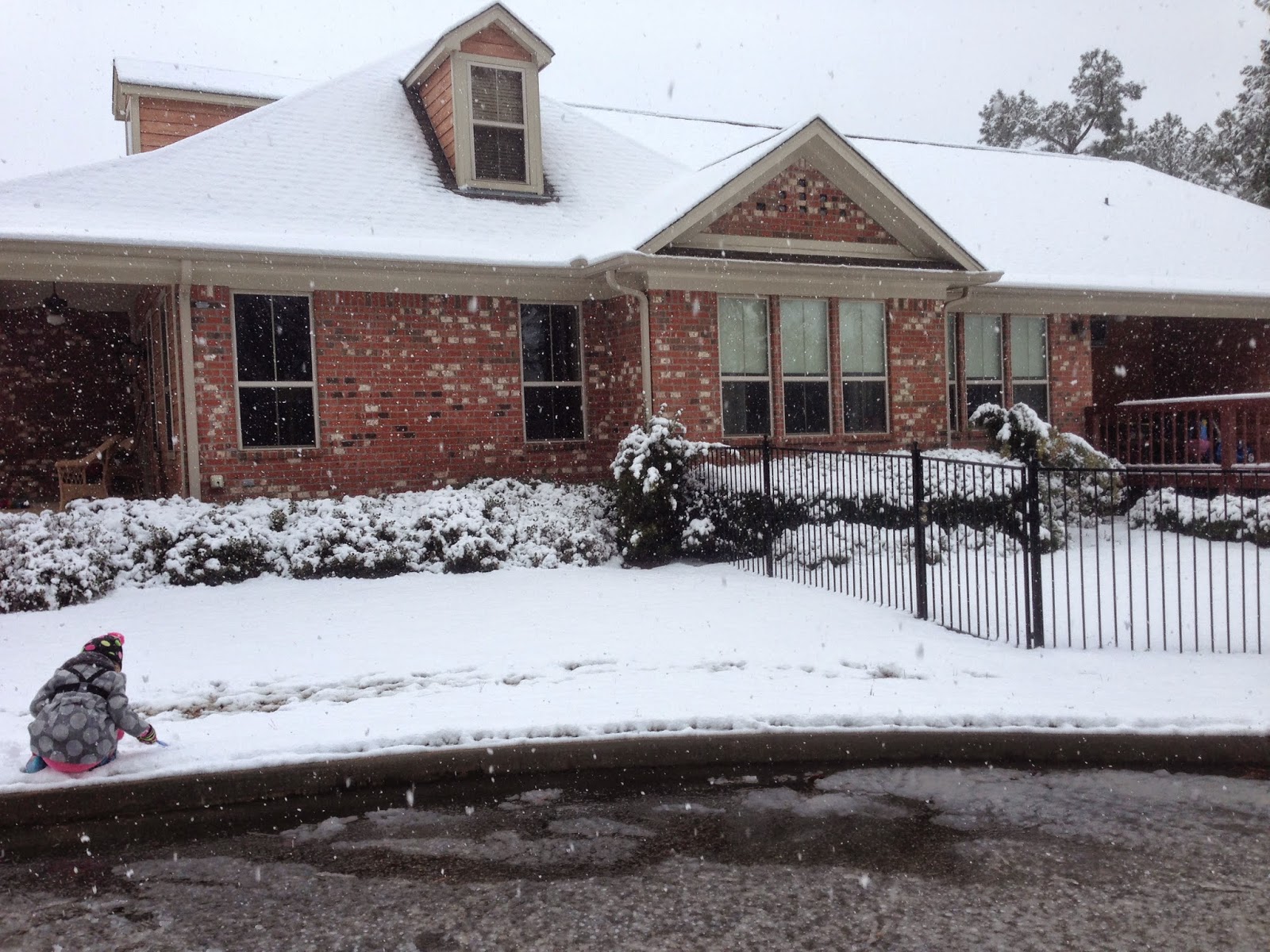 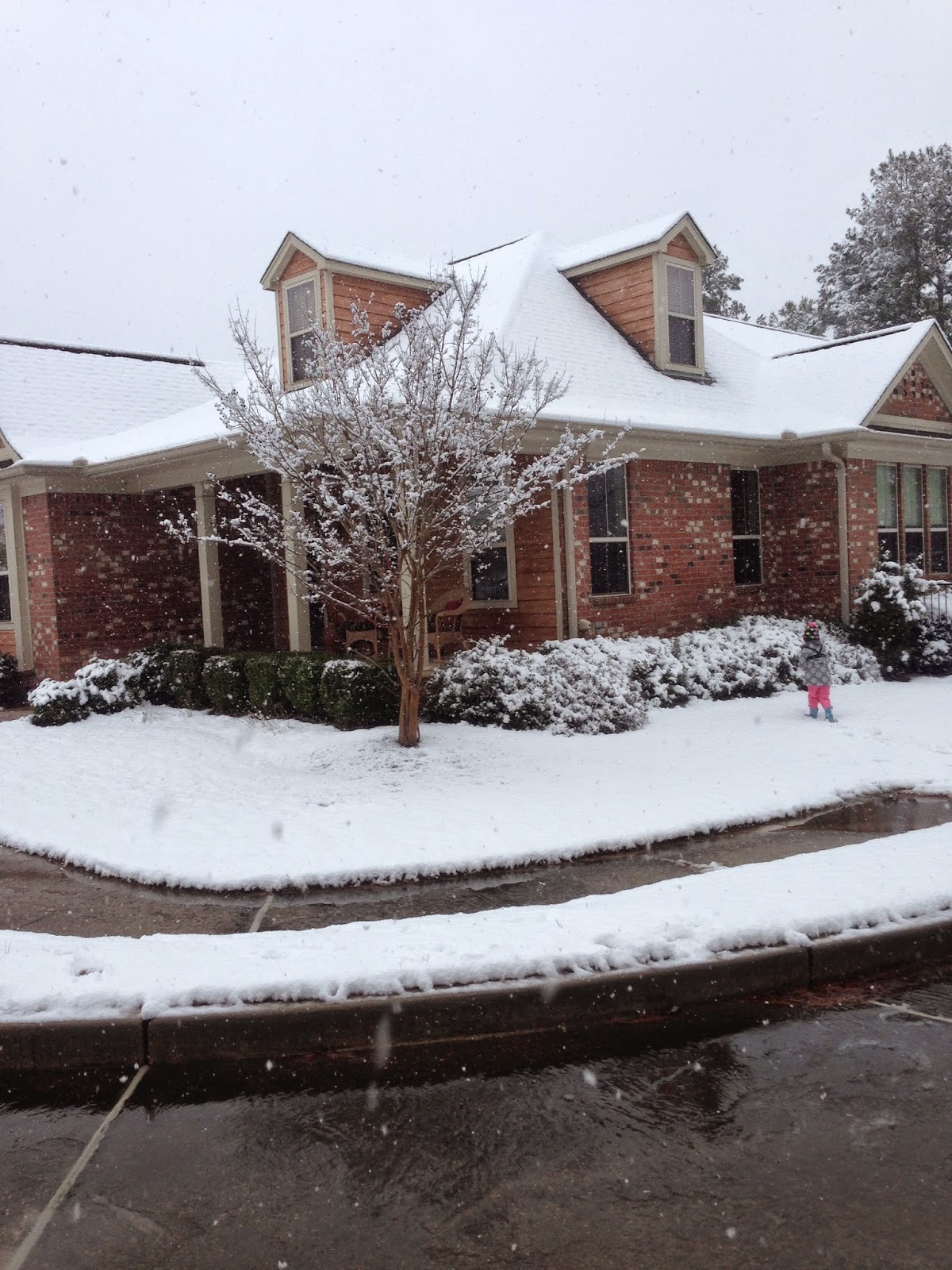 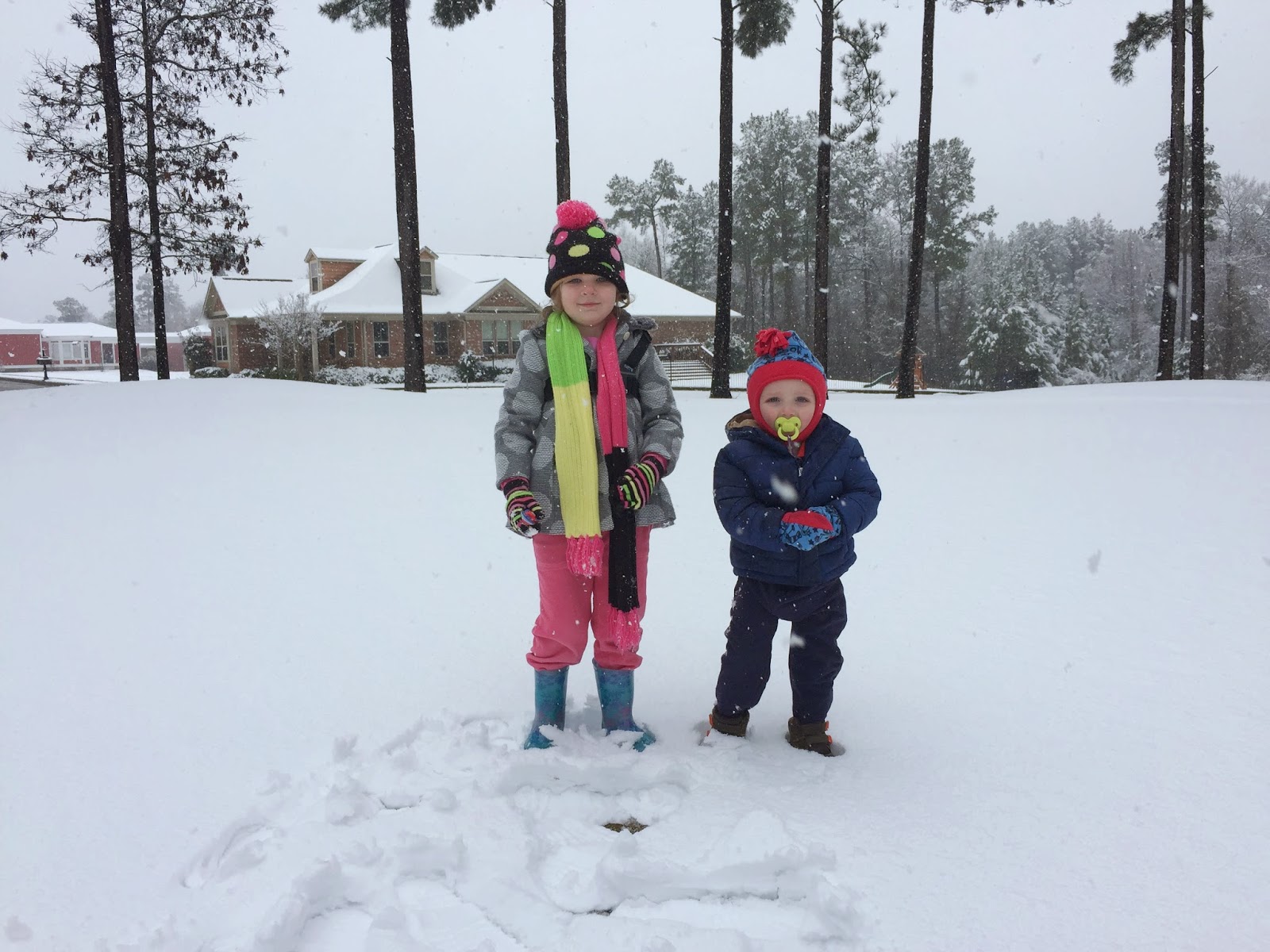 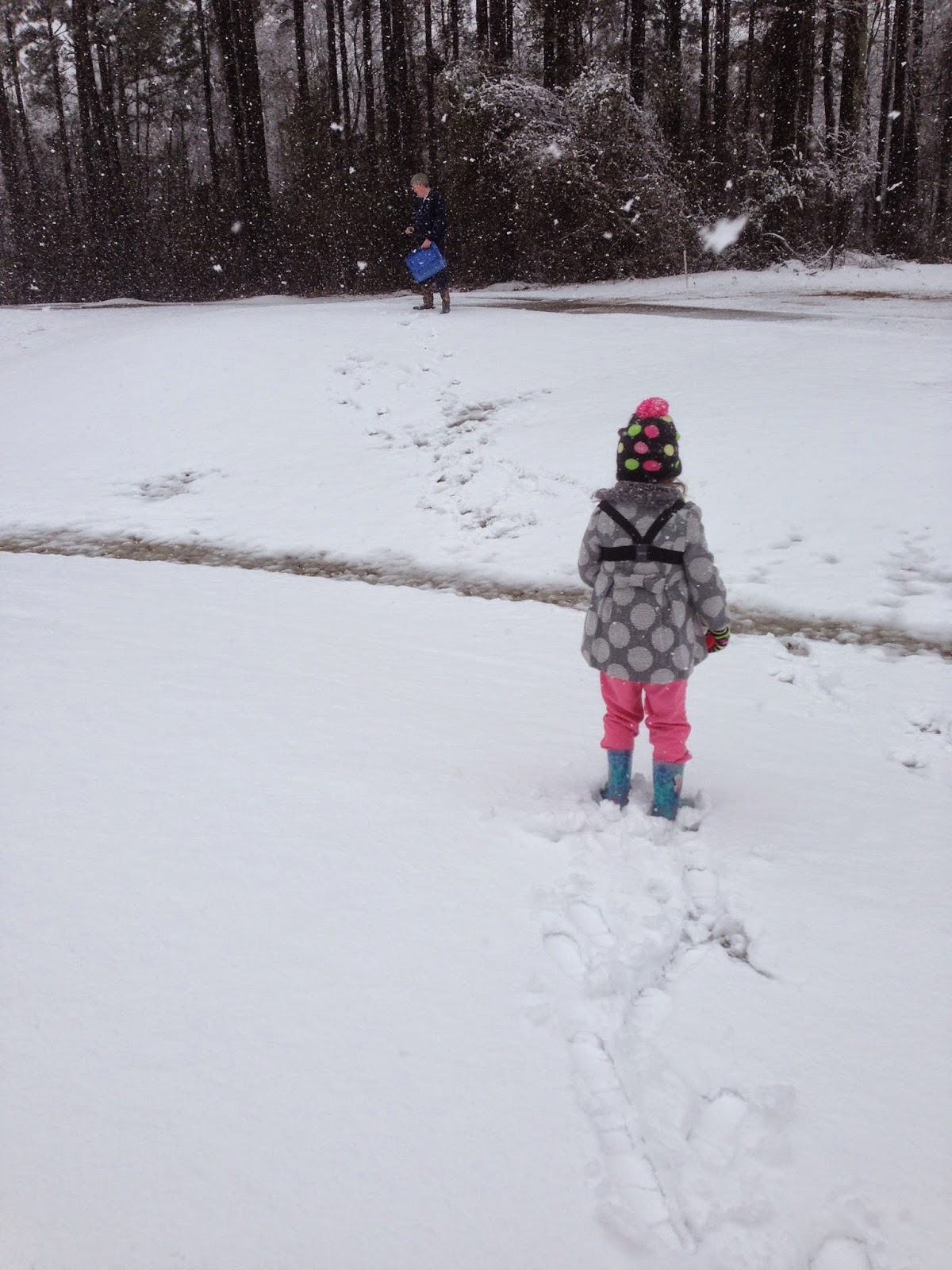 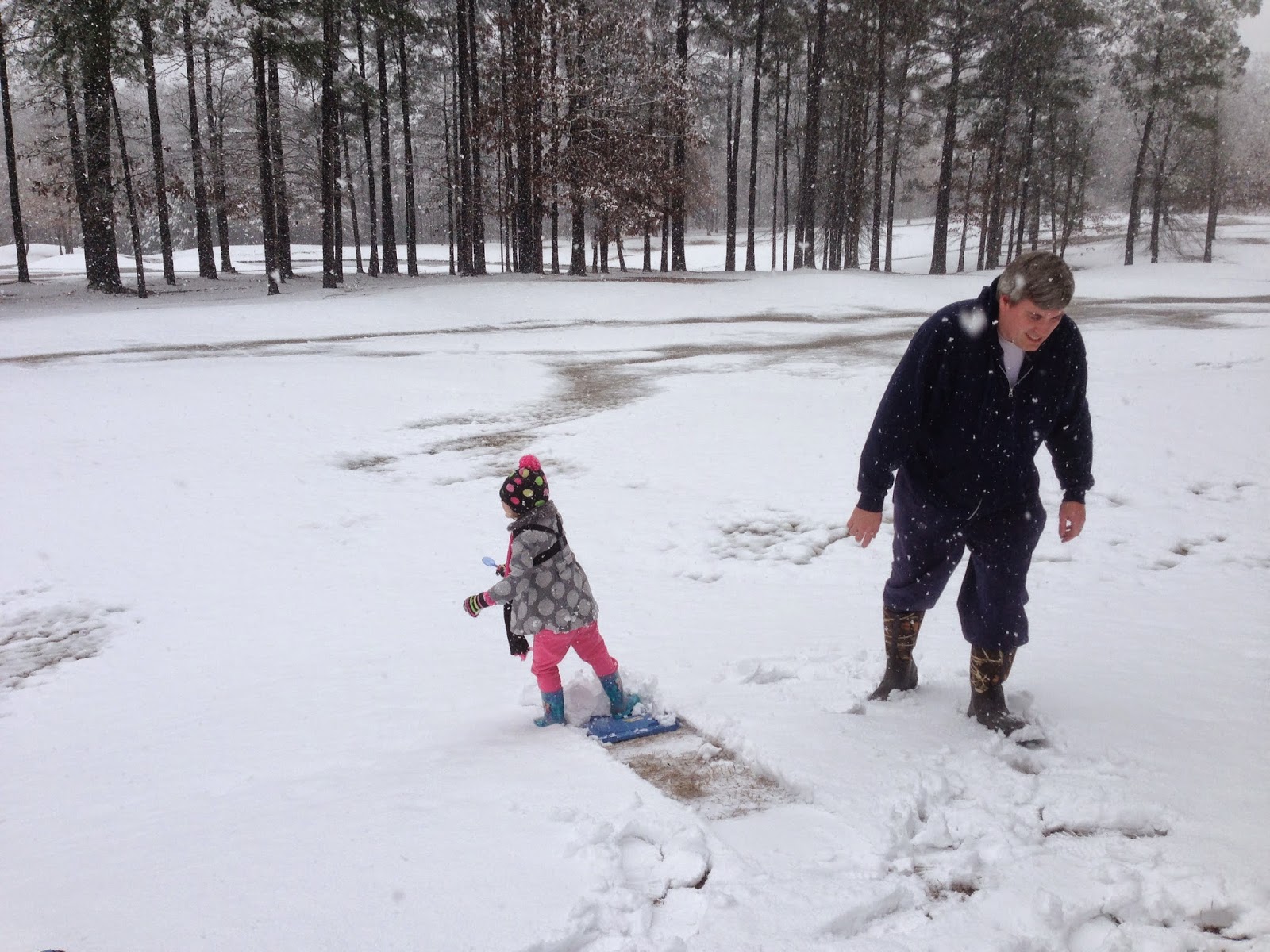 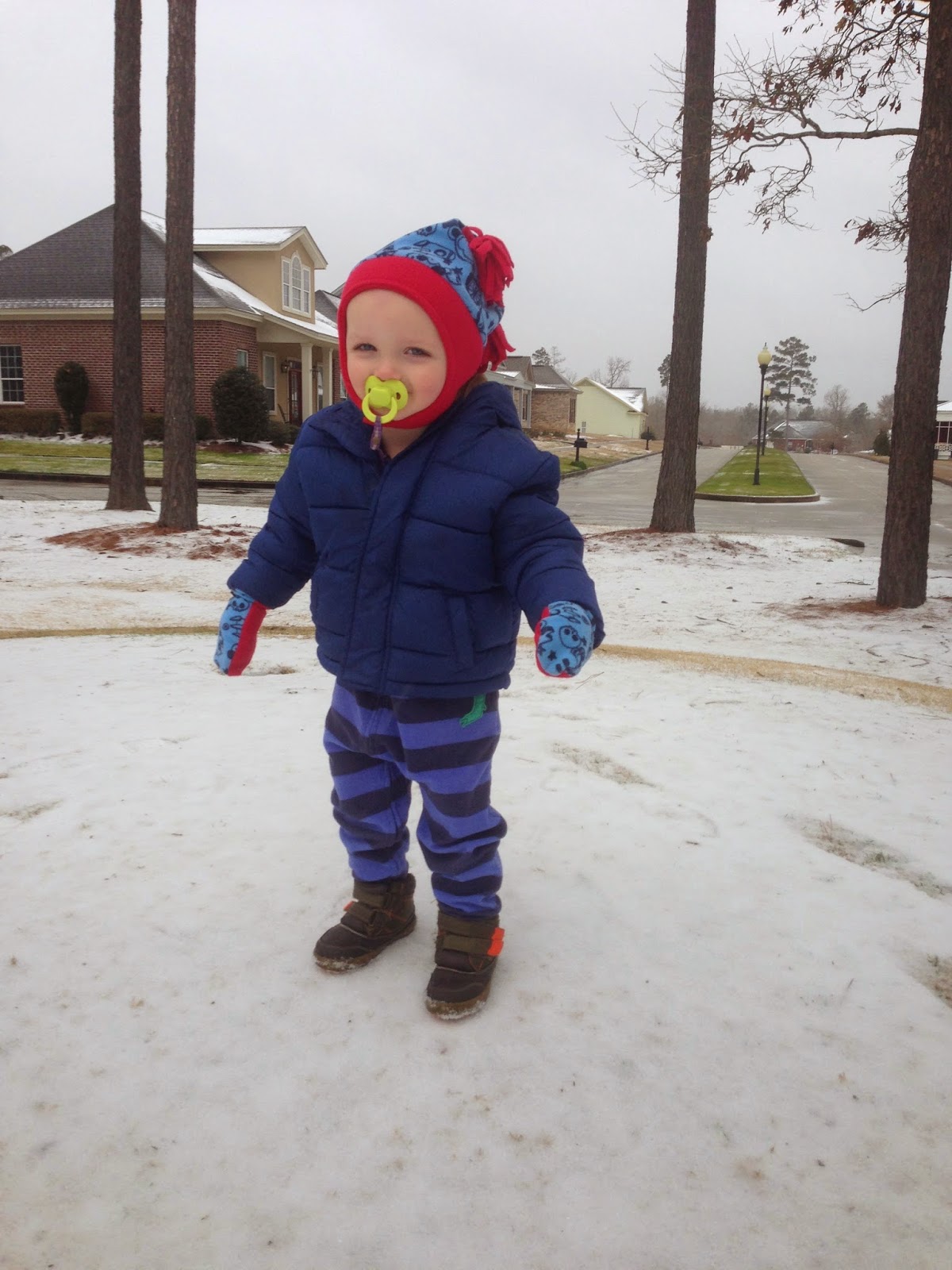 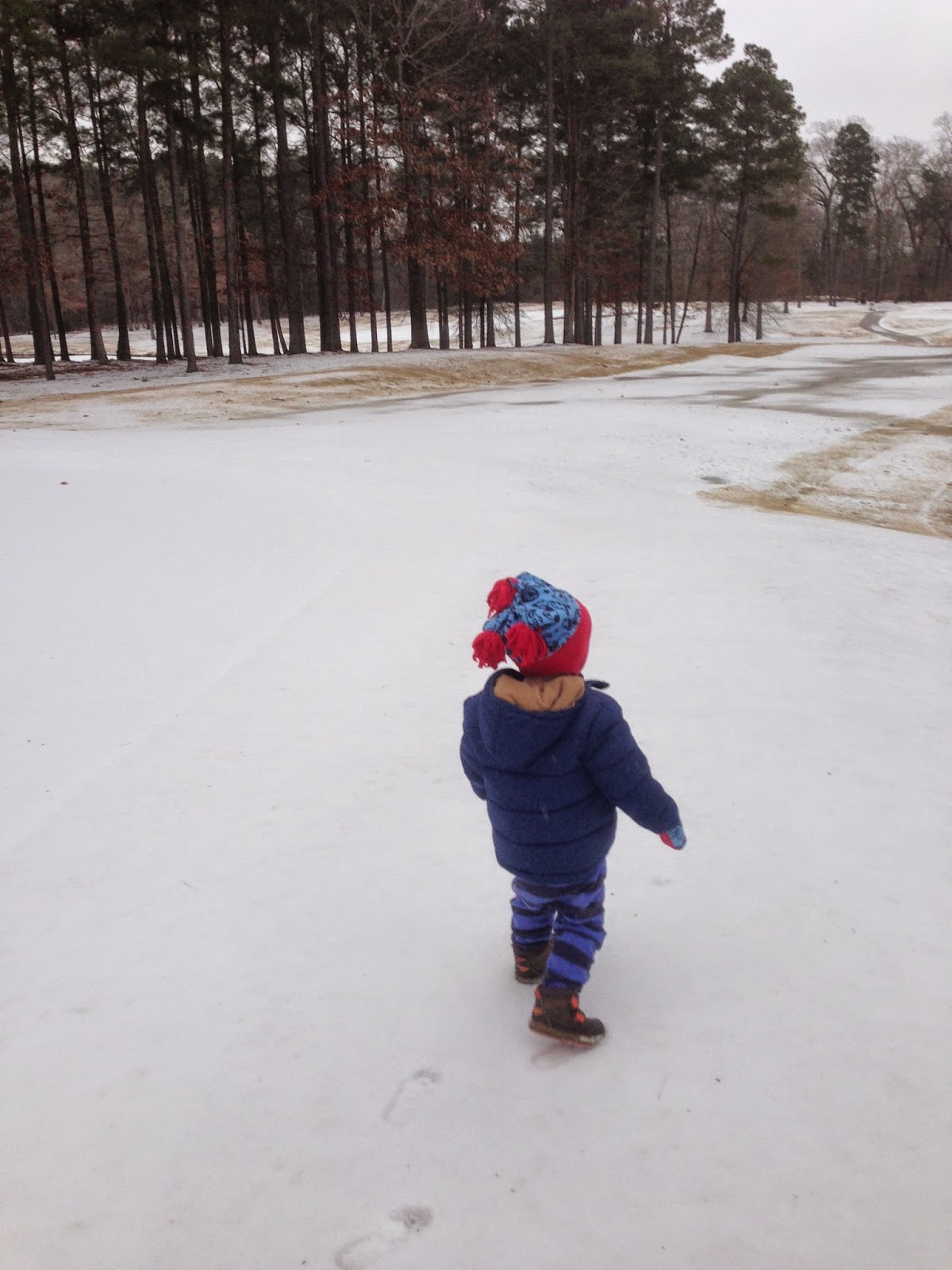 One day, I'll post a picture of myself on here & I'll be wearing make-up & sporting bouncy, freshly washed & styled hair.  That day will certainly come after I've finished watching every season of Gilmore Girls. 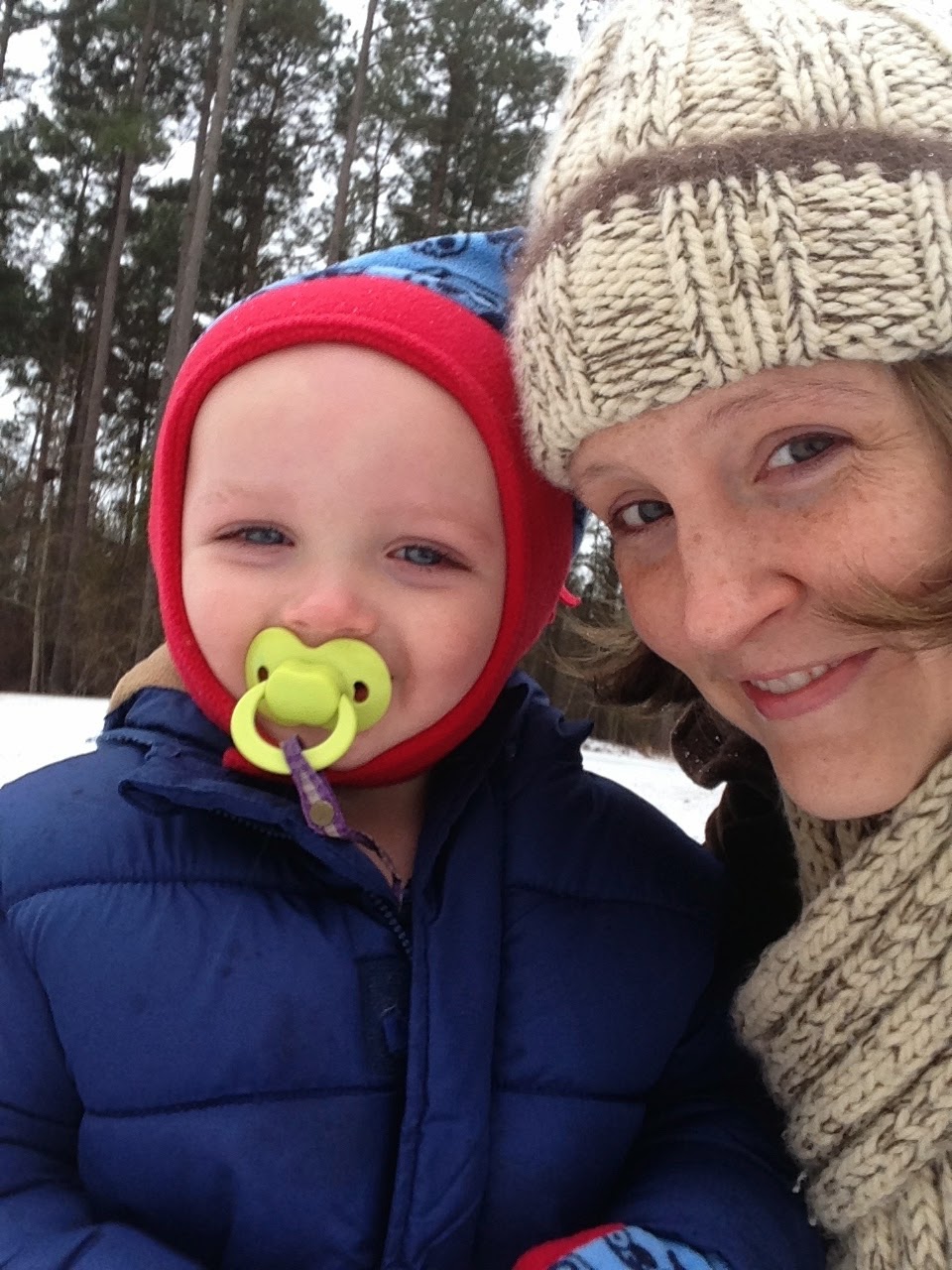 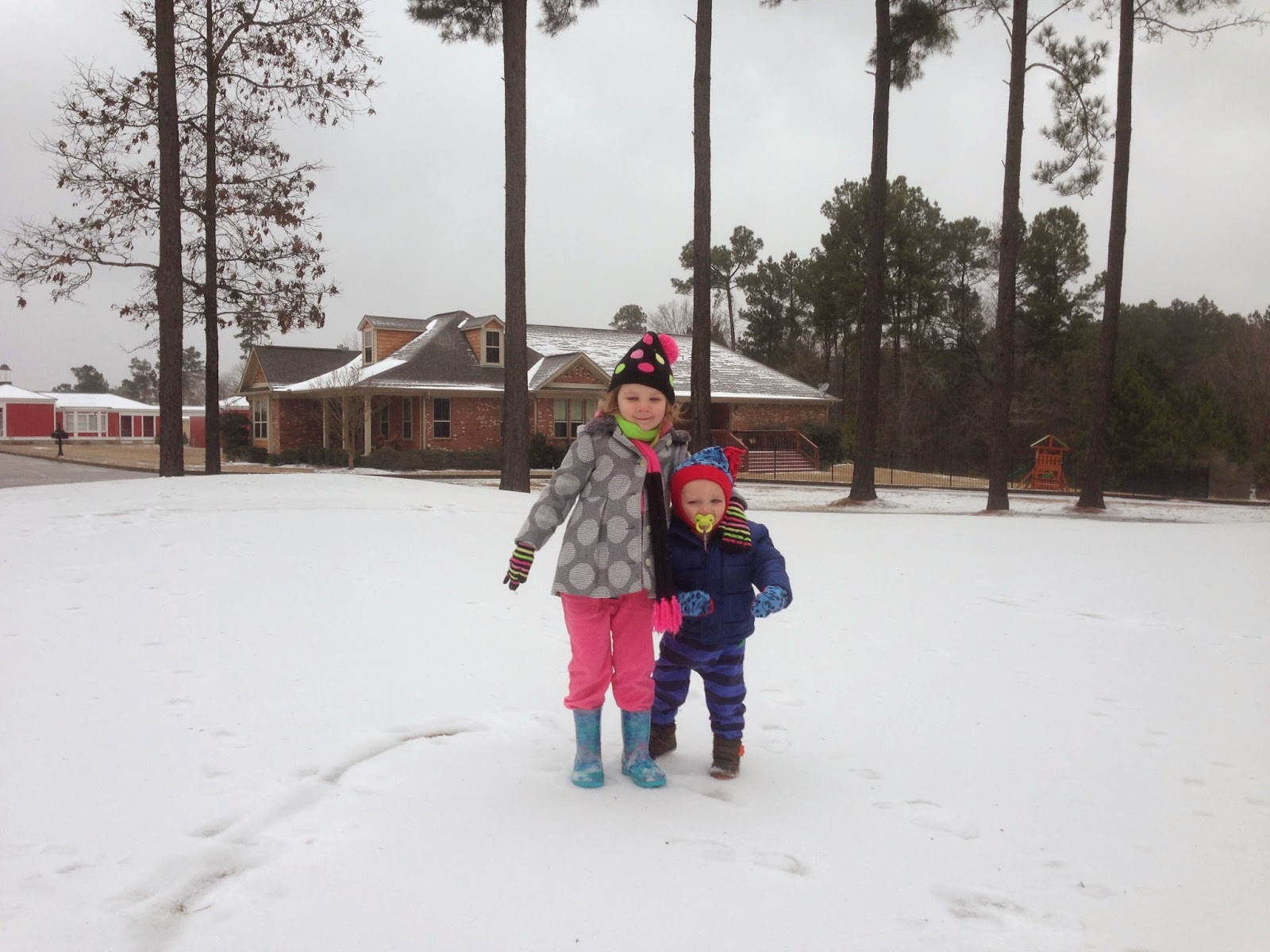 I even let the dog out: 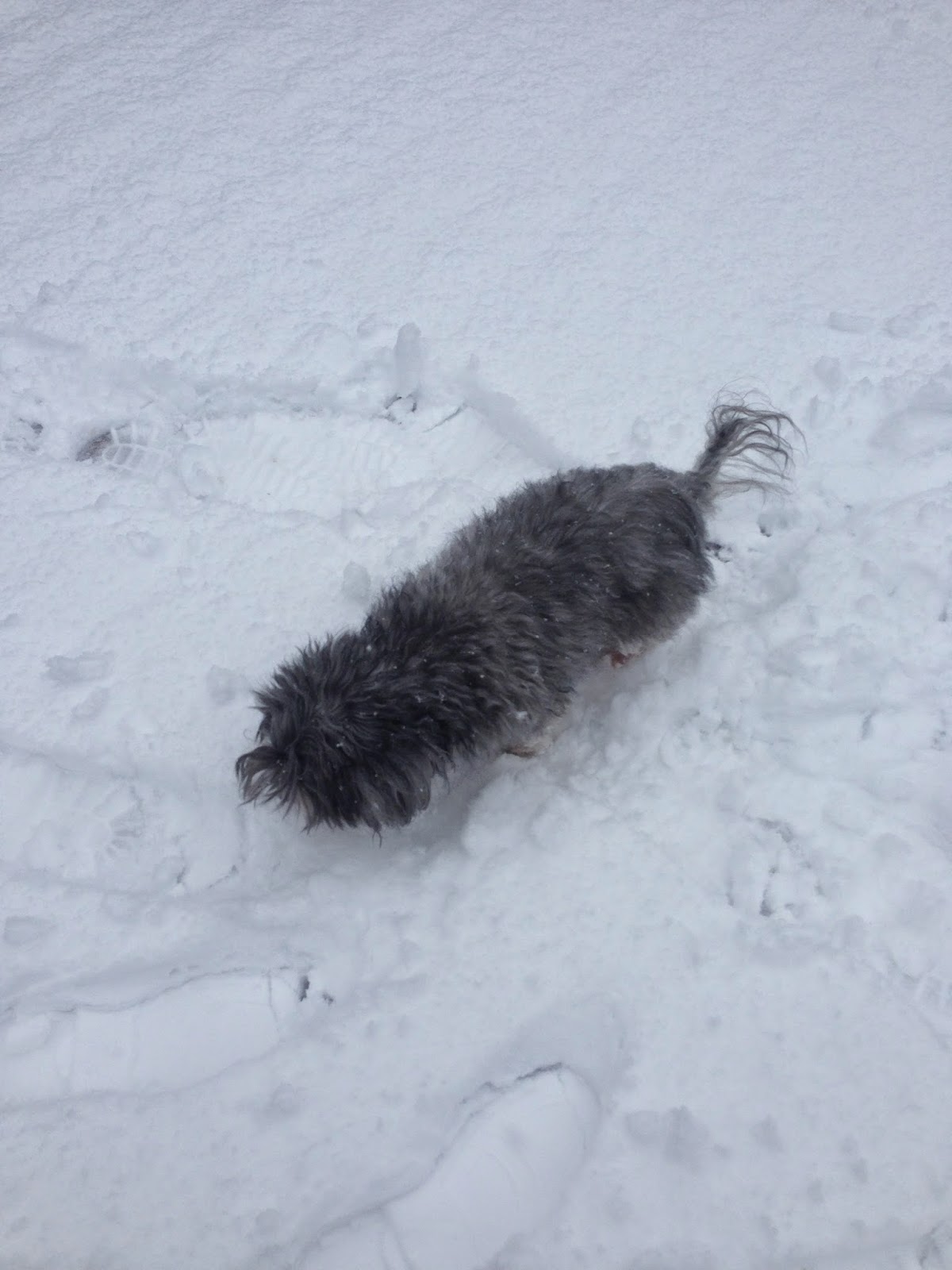 And here's the snowman: 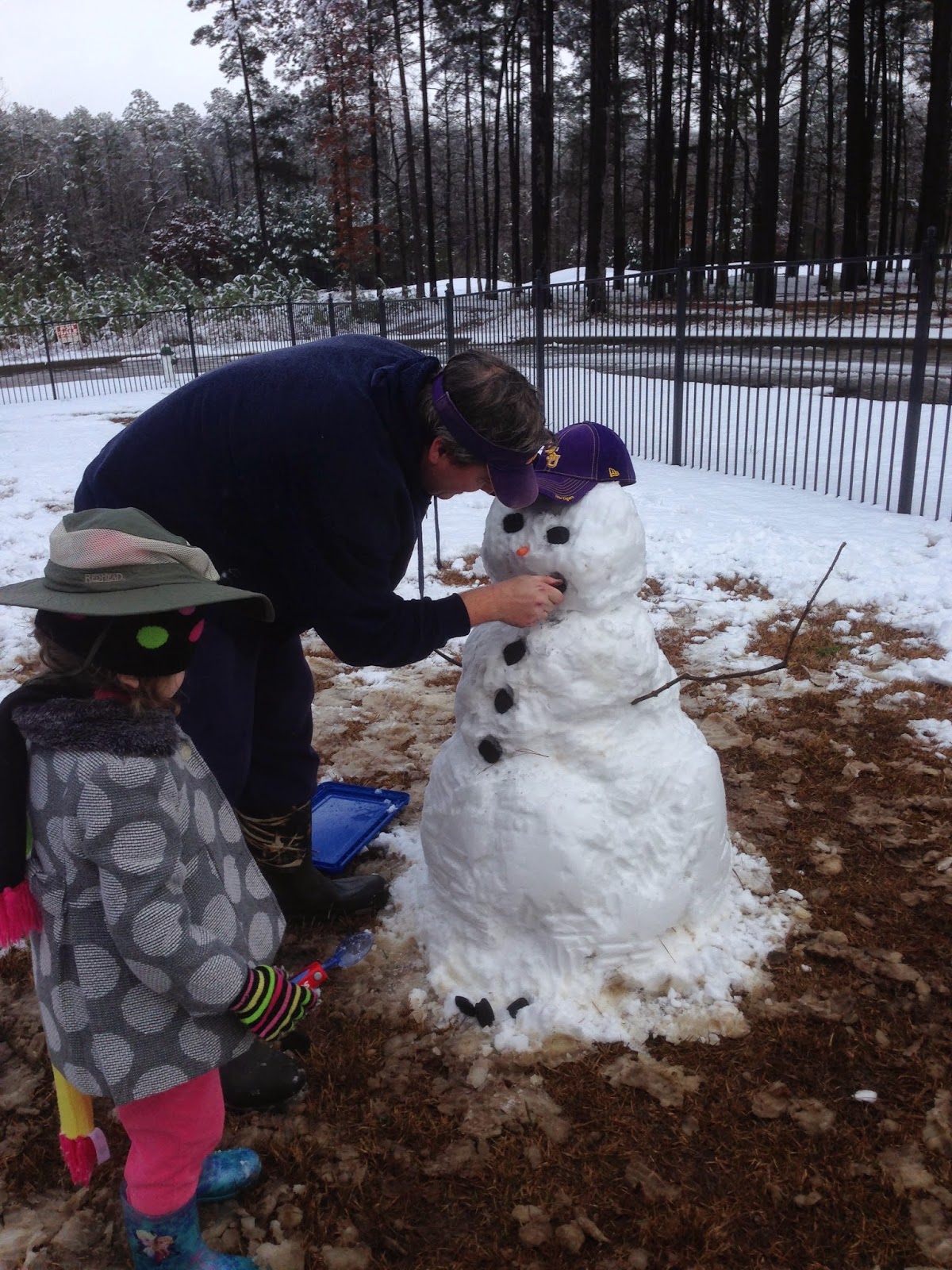 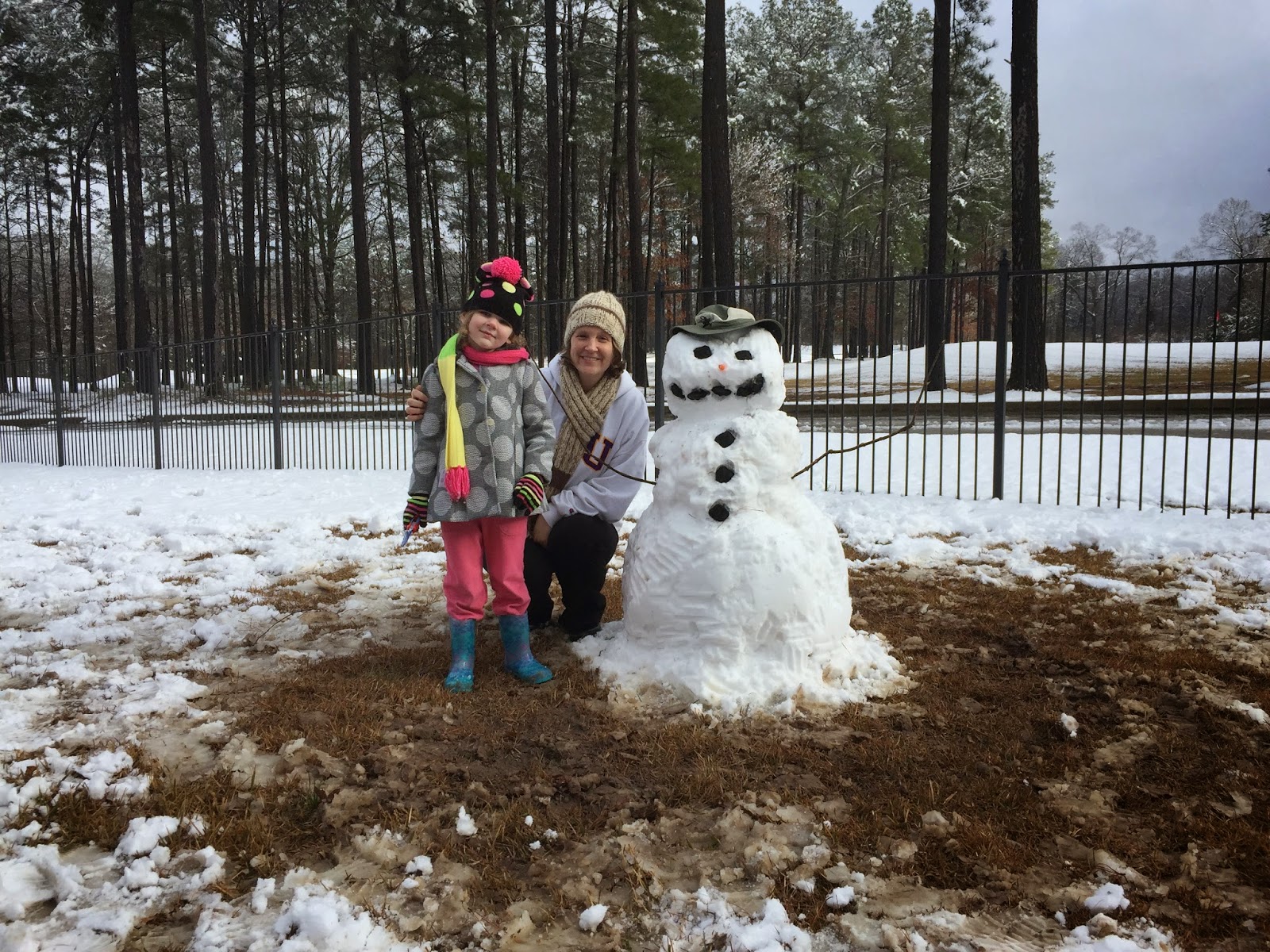 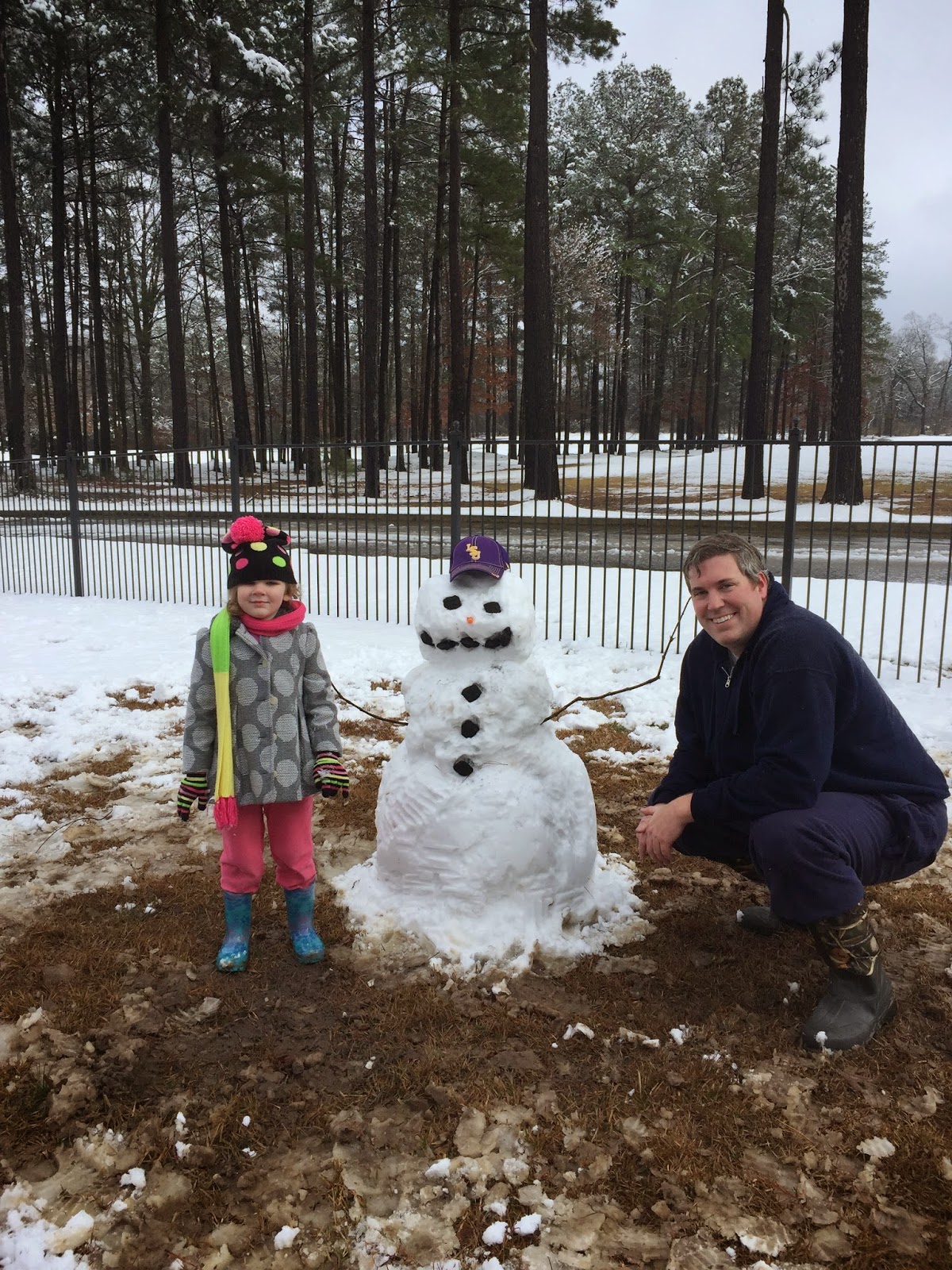 Henry wasn't all that interested in building the snowman.  I tried to tell him the roads were treacherous. 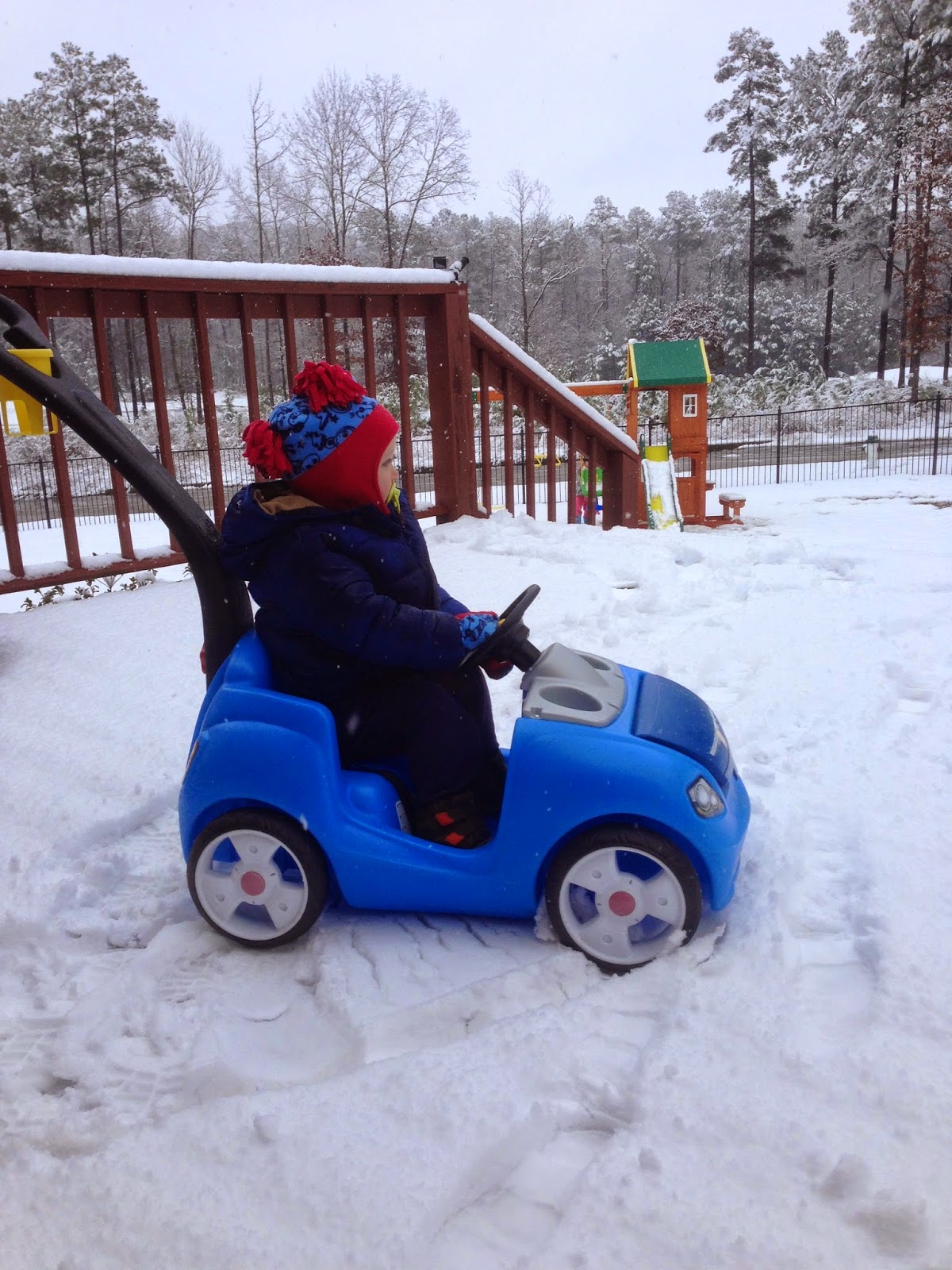 I promise to never post that many pics again, particularly of our house, our fence, or the trees surrounding the house & the fence, unless we again see three plus inches of snow, which is unlikely, what with global warming climate change.

I've seen plenty of snow in my life, though admittedly most of it was on the Colorado mountains.  I've seen snow in Louisiana a handful of times, but rarely does it accumulate.  So many things crossed my mind on Wednesday.  I thought about basically everything Robert Frost wrote.  After four days without one, I wondered how much longer I'd have to wait for a cup of Chick-fil-A coffee.  Probably most gripping were the scriptures that came to mind:


"Come now and let us reason together," says the Lord, "though your sins are like scarlet, they shall be white as snow; though they are red like crimson, they shall be as wool."

In addition to its ability to alter a landscape, to blanket the dead, brown grass, transforming it into an inviting canvas, snow is also a preservative.  The snow has to melt for Time to do its thing, for the grass to reawaken, the flowers to bloom, the seasons to march onward.  The phrase "frozen in time" has taken on new significance for me as I've read Hugh Howey's Wool series, the premise of which - - & it pains me to give you such a short summary - - is that a handful of powerful people decide the world needs to be cleansed, that humanity needs a reset, & since they're not God & they can't flood the earth to initiate the reset, they destroy the world with nuclear weapons & only a handful of people survive, thanks to underground silos that have been prepared for them.

In the second book, Shift, you learn that many of the women & children who were ushered underground when the nuclear holocaust began have been frozen.  The plan is to preserve them for hundreds of years, until it's determined that it's once again time for men (& women & children) to inhabit the world outside the underground silos.  And yes, after rereading Isaiah 1:18 that's quoted above, I assume Howey intended a Biblical reference in his use of Wool as his title, which is used in Isaiah as a descriptor of those who've been cleansed by Christ's blood.  If he didn't intend any Biblical reference, well, he missed a huge chance to be literarily cool.  I can't tell you how the series ends as I'm reading Dust, the final book, right now (slow going on the reading at the moment, what with my distracting crack addiction).

That the world seemingly stops spinning when it snows here is so appropriate.  We plan, we schedule, we run around in circles, so busy & important & focused.  Then, on a random Wednesday in February, God said Stop.  Be still.  With large, stunningly white flakes, He made Himself known for a few hours, whispering to us, forcing the busy to sit down, to watch, to listen.  He carved out a day or two of togetherness for many families who otherwise spend weekdays apart.  He said, I am, & with schools & roads & Chick-fil-A closed, even the busiest among us paused & unwittingly etched out for ourselves & our children a handful of memories to preserve.

I am thankful the God I serve counts Time as nothing.  God is a God of restoration, & one day, when every knee bows, the Father will scoff at Father Time as surely as He will claim the final victory over Satan.  Christ's sacrifice covers our filth, & makes possible a restoration of all that Time has stripped from us.  I can face each day because He lives, but also because He will one day eradicate the cruelties Time leaves in its wake, & nothing, not Time, not sin, not death, will be able to separate me from Him.  His blood envelops me in a blanket that is, like snow, stunningly pure, white, & a guarantee that one day, no matter the ravages that befall me, I will be whole & perfect & live forever in a place where Time is a foreign concept.

I close with Happy Birthday wishes to my mom, who turns xxxxx today.  Time continues to be extremely kind to her.  I would say I hope I look as good as she does when I hit xxxxx, but considering my hips & thighs have eclipsed hers in circumference since the moment I hit puberty, & given the many hours I spent in the sun as an imprudent (but incredibly tanned) teen, I know that would be a foolish hope to harbor.

Happy Birthday to my mom, our Nana, whose grandmotherly efforts keep me sane.  You rise to the top of the grandmother crop when you learn how to check blood sugar & dose insulin.  Just saying. 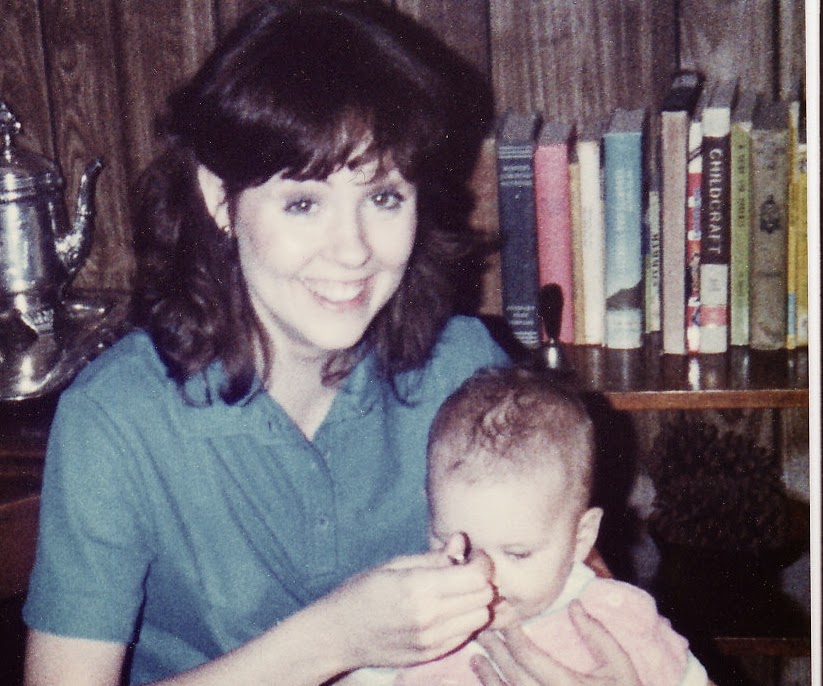 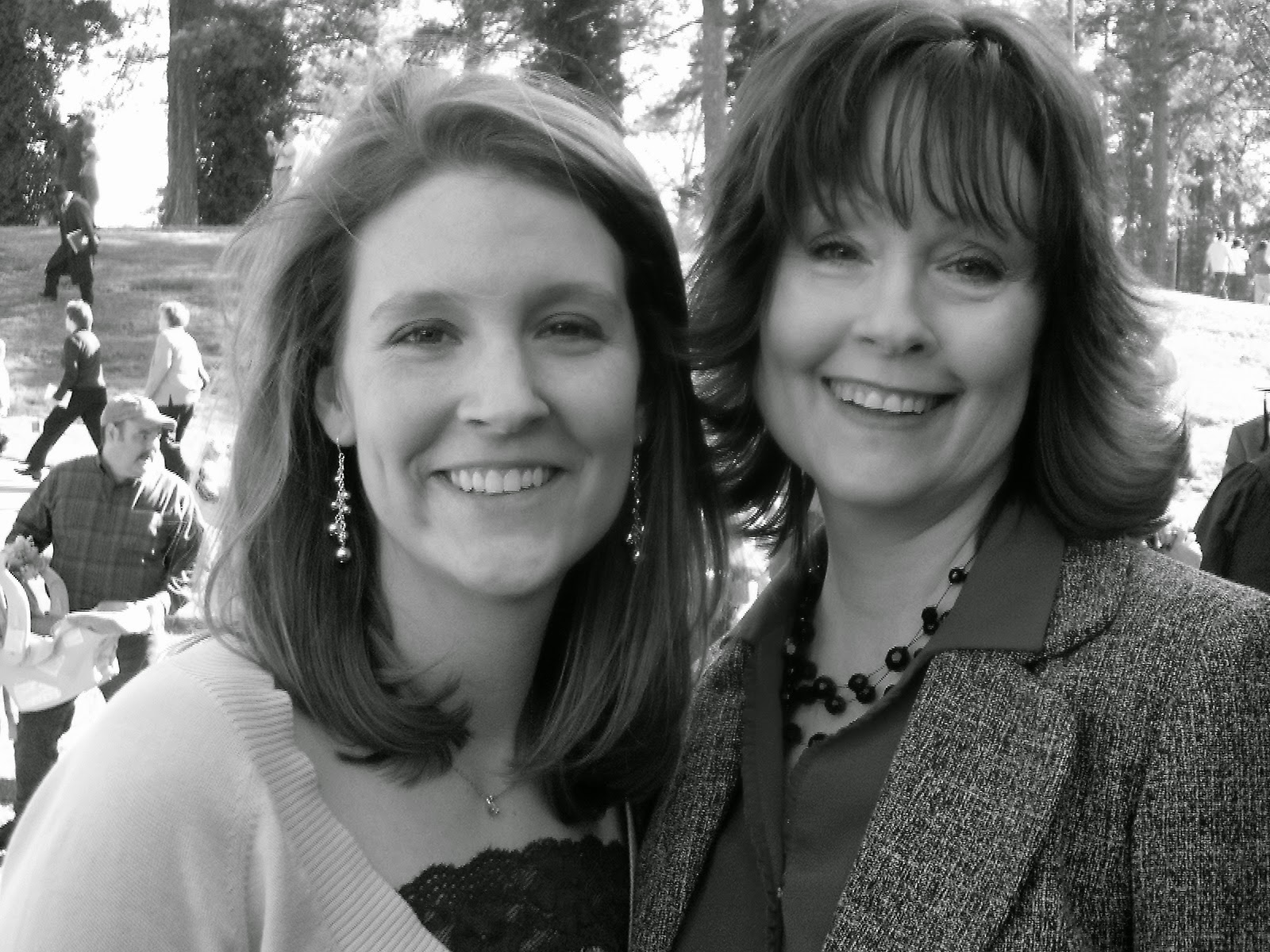 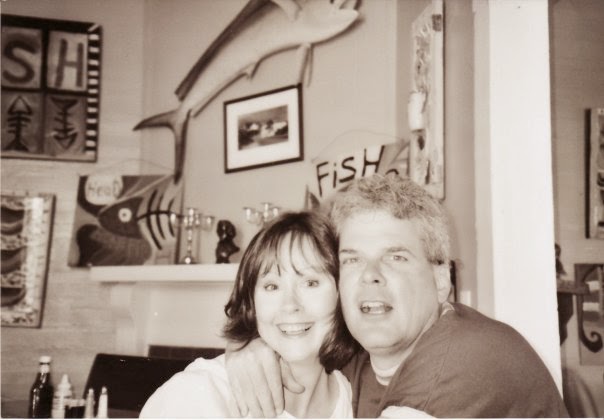 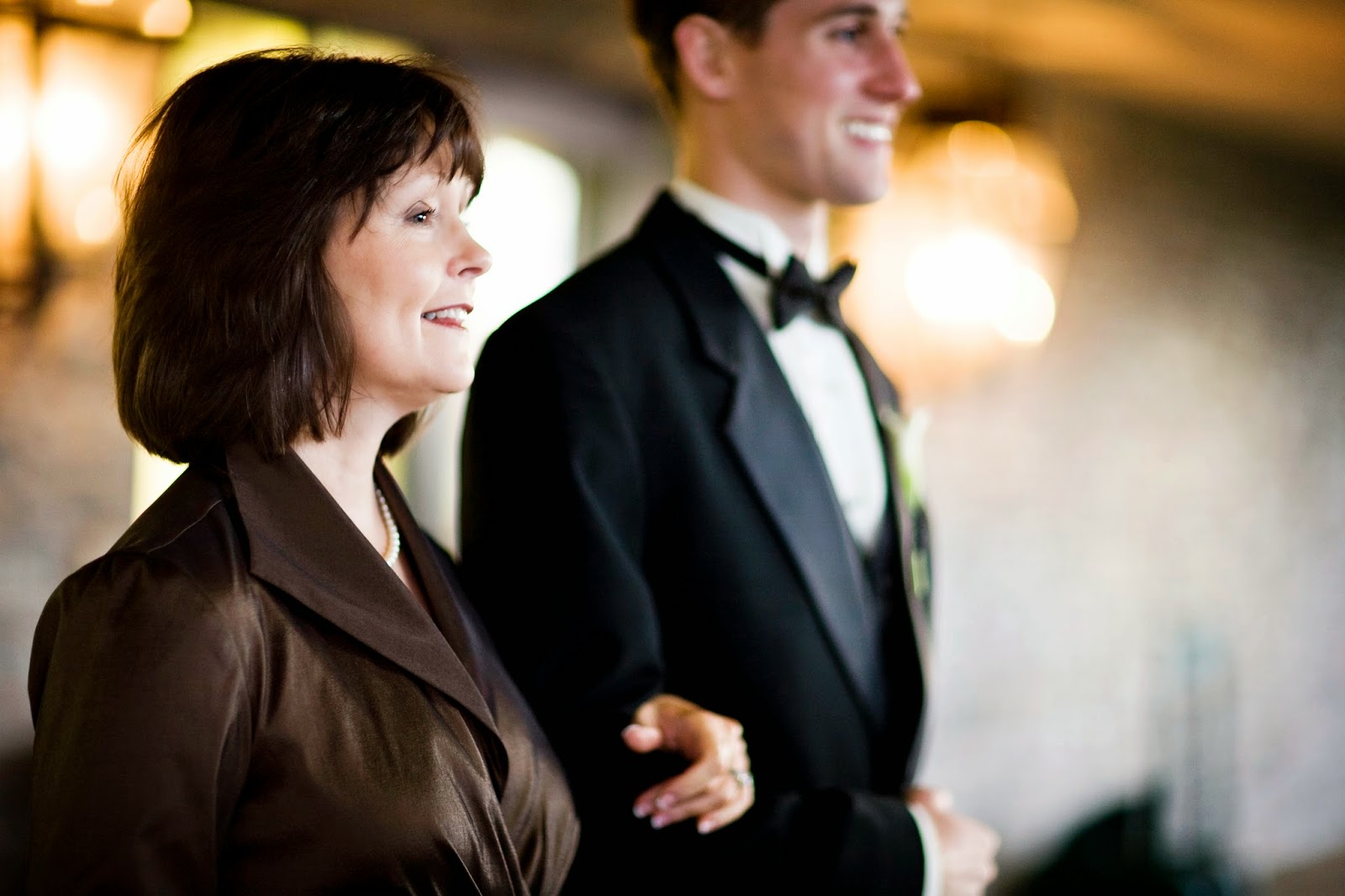 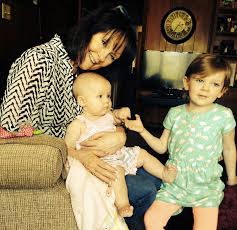 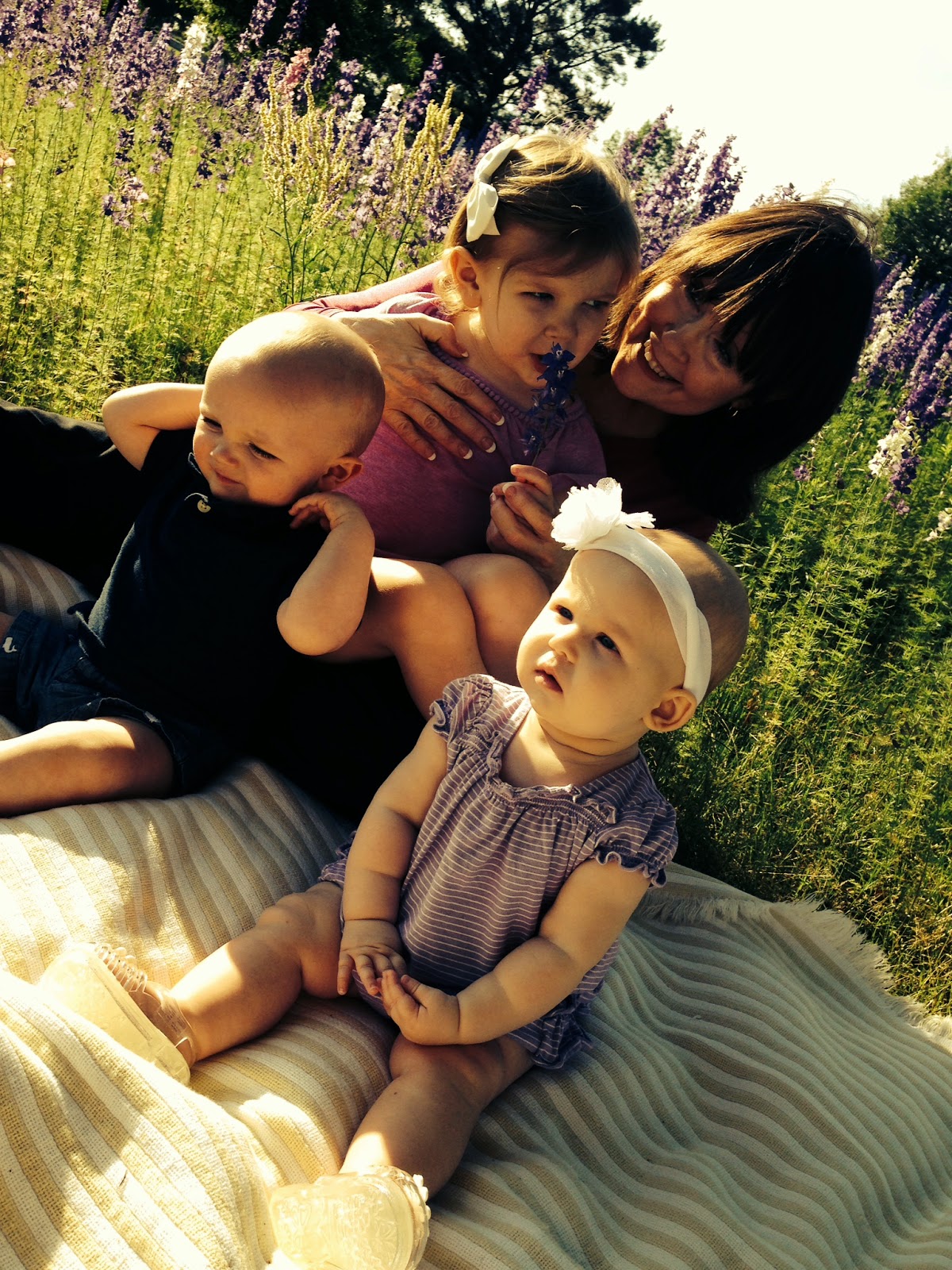