Later today I will teach my speech classes & we will take time to discuss the events of September 11, 2001.  We're going to watch a few of George W. Bush's speeches relevant to the terror attacks of September 11, & also watch some of the live news coverage from that Tuesday morning thirteen years ago.

Last night I was on the computer planning out today's lesson, & I was distracted by the influx of news articles covering (& copious Twitter complaints about) Obama's speech re:Islamic terrorists who kidnap & behead Americans.

Thirteen years have passed since Islamic terrorists attacked this nation, & we still refuse to name the enemy.  ISIS, Obama declared just last night, is not Islamic.  Maybe next year, on the eve of the fourteenth anniversary of the September 11 terrorist attacks, Obama will go spit on Ground Zero.

Three years ago on the tenth anniversary of September 11, 2001, I posted a blog that I am going to repost today.  I was digging through the blog archives last night attempting to find it because, honestly, I could not remember a thing about what I'd written, & was beginning to question my memory of even having written it, when I finally found it.  I read it, & oh my goodness, it was a bit eery to read given the president's speech last night.

On Tuesday, September 11, 2001, I was twenty years old & a senior at Louisiana College.  Trey was twenty-two & in his first semester of law school at LSU.  It was going to be a great week.  You're aware of my affinity for September, & this week I was in an especially affable mood because my friends & I had tickets to see Matchbox 20 in Shreveport Tuesday night, & we were planning to travel south to Baton Rouge to watch LSU play Auburn on Saturday.

Like many Americans, my cell rang repeatedly that morning & I, having no early Tuesday/Thursday classes that semester, didn't answer it for awhile.  After hearing it ring over & over, in my sleepy haze it occurred to me that something might be wrong, so I answered it & had the first of many conversations with my parents that day.

Ten years later, my day to day concerns are much different, but I wonder if we've learned anything as a nation.  Our current president's poll numbers are sinking like a stone among all groups, with one noted exception: Muslims, who approve of the job he's doing to the tune of around 70%.  Until we elect leaders who are willing to call a spade a spade and abandon rhetoric that sugarcoats the realities of Islam, referring to it as a "religion of peace," we can expect more of the same and we should not be in any way surprised.  We are at war with Islam and we have been for decades.  Someone have the courage to say it; Islam is not a religion of peace.  Muslims do not respect those who allow people to practice their religion of choice unmolested.  They are not in search of a place they can practice their religion freely, for if that was their goal, they would embrace America rather than try to topple her.

Our political correctness is perhaps Islam's greatest ally.  We don't want to hurt anyone's feelings, so we frisk elderly women and disabled children in airports despite the blatantly obvious characteristics of those most likely to use a plane full of innocents as a weapon.  We refuse to name our enemy, preferring to pretend those who seek our destruction are a fringe group, rather than a fanatical religious organization with its tentacles so deeply intwined in our society I am reminded of the Red Scare following WWII.  At least during the Red Scare it was acceptable to say openly that Communism is evil, & those accused of being Communists vehemently denied it.  Islam & Communism differ in some significant ways, but they're both ideologies that cannot flourish in America as their founders intended them, and for the same reason: Christianity is an affront to them.

Those who so mercilessly attacked our nation a decade ago knew well what Ronald Reagan said during his first inaugural address:

Three thousand dead Americans was just a bonus to them; their goal was millions more cowering in fear.  Their intent was to instill fear & to squelch the will & moral courage of free men & women.  On more than one occasion my preacher, Don Delukie, has spoken eloquently of the many parallels between freedom from tyranny and freedom from sin.  Blessed beyond measure are those who live free from both.  Man yearns to be free, & this principle shaped & guided the revolution that gave birth to this nation.  I don't live in fear, not because I am certain this nation won't be attacked again, but because I know, as Paul did, that to live is Christ, to die is gain.  Our enemy hates that many Americans love and trust and worship the one true God; they seethe with rage that this nation allows Christians to live freely and worship as they please.  I imagine our enemy takes great delight in the attacks on Christianity that are leveled by other Americans.

My preacher rarely gets into political matters from the pulpit, but he recently pointed out a passage I had never before noticed.  Ecclesiastes 2:10 reads, A wise man's heart is at his right hand, but a fool's heart at his left.  Take from that what you will.  There are those who point their finger at "radical Islamists," & then march right back to Capitol Hill and make decisions that chip away at the freedoms we cherish.  Their actions are not as obviously treacherous as crashing a plane into a building, but our freedoms are under attack from all sides, and the enemy knows who their allies within are; if you don't believe me, look at the polls.  Praise God that the freedom from sin He offers us cannot be put to a Congressional vote or stolen from us by those who deny Christ.

I don't know how I originally stumbled on this image.  It may have been forwarded to me in an email.  It was drawn by man named D.T. Devereaux.  Many of his drawings are controversial.  It's a gripping image. 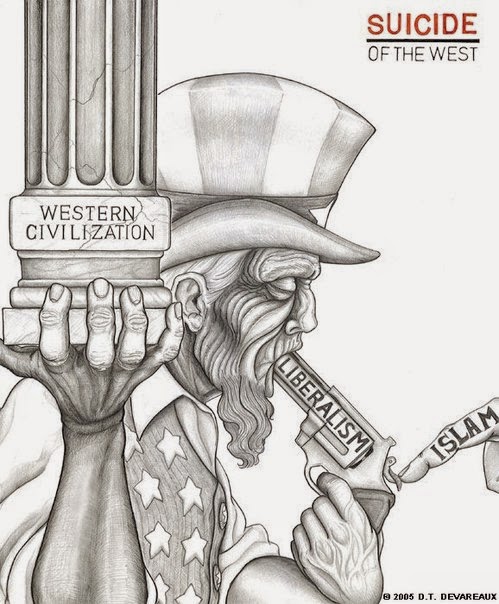 LSU didn't play Auburn that Saturday.  The game was played in December, pushing the SEC title game back a week.  LSU defeated Auburn & went on to defeat Tennessee for the 2001 SEC title.  I still have 4 tickets to see Matchbox 20 dated September 11, 2001.  Being the most responsible member of my group of friends, I was nominated to keep up with the tickets & make sure they made it to Shreveport that evening, but of course, we all spent that evening glued to our televisions.  There was a way to get a refund for the cancelled concert, but we never bothered.  Who knows, maybe one day the tickets will be worth something.  I will give them to Reagan when she's older, & she'll ask me who Matchbox 20 was.  I hope she doesn't ask me why the date is significant.

My life has changed in many ways since I originally wrote the above post, but unfortunately our nation continues to plod along, a rudderless, sinking ship with a captain who insists there is no water.

I pray that today God gives peace to those who've grieved a loved one for thirteen years, & that soon, they might find some solace in the words of an American president who is willing to state harsh truths about the reality of the threats we face.