Discipline (of the self variety) 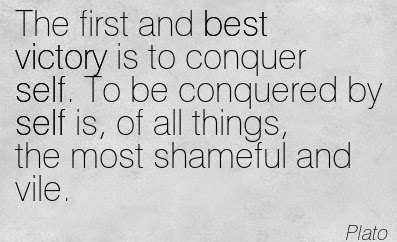 I've been thinking a lot about the idea of disease.  Disease is, at least for me, laden with negative connotations.  You don't want a disease of any kind, right?  You certainly don't want your child to have a disease.

This article came to my attention recently.  It was posted on a friend's Facebook page.  Written by Dr. Keith Ablow, a psychiatrist, it is titled, "Obesity is not a disease - and neither is alcoholism," & was written a year ago in response to the American Medical Association's decision to classify obesity as a disease.  What Dr. Ablow argues, & I agree with him, is that by labeling obesity & alcoholism diseases, we're giving alcoholics & the obese a pass, an excuse, & we're also placing the financial burden of their often costly healthcare on the taxpayers (& the taxpayers are BURNED OUT, y'all!).

This irresponsible use of the term disease is one more example of the pervasiveness of the "It's not my fault" culture in which we live.  So here goes.  Yes, yes, sometimes things are your fault, & if you make bad choices repeatedly, & those choices become destructive habits, & you find yourself grossly overweight, or drinking in a closet rather than spending time with your kids, it is your fault.  IT. IS. YOUR. FAULT.  Slapping the disease label on something that is the direct result of poor decision making is a blame shifting game that is detrimental to those who, more than anything else, need a heavy dose of self-control, & it is also financially unsustainable for our debt-crippled nation.

Diabetes is a disease.  Type 1 diabetes is, at present, an incurable disease.  My three year old has an incurable disease.  Three years in, one of her organs bailed on her.  She absolutely must receive insulin on a daily basis or her physical condition will rapidly deteriorate; conversely, if she has too much insulin in her system, things can get ugly very quickly.  Google hypoglycemia sometime.  Diabetes can be managed, but it is a serious disease, & it is ridiculous to me that alcoholism & obesity are also classified as diseases.  A lack of self-disipline is not a disease.  Laziness is not a disease.  Unfortunately, our government encourages laziness.  We heavily tax industrious business owners, & mail checks to those who don't work.  We pay the (often excessive) medical bills of those whose maladies are the result of years of terrible, self-indulgent choices.

We've got it all backwards.  We pass laws attempting to dictate what people can & cannot eat, drink, smoke, etc., but yet, when they make unhealthy choices, we're right there to pick up the tab.  We tell them they have a disease, & nothing is their fault, & Uncle Sam will make sure their medicine, & their surgery, & their rehab are paid in full.

Once upon a time, this was America, land of the free.  You were free to eat yourself into an early grave, & free to drink your life away, with the understanding that you would pay your own medical bills, & your rehab bills when they started rolling in, because everyone, including Uncle Sam, knew that what you had was a self-discipline problem, not a disease.  Freedom means not only the freedom to do as you please, but the understanding that you will accept the consequences of the decisions you make.

We clean up the messes our children make when they are small because they are too young to understand the consequences of their messy, messy behavior.  I watch Henry throw food & smile & laugh, & then I clean it all up, because he has no concept of consequences yet.  I also dictate basically every facet of Henry's life; where he goes, what he eats, drinks, wears, etc.  He is a child, & I am his parent, & this is how our relationship should function until he ages & gradually is given more freedom, & then a little more freedom, with the understanding that with freedom comes responsibility.  If I continue to clean up his messes, I do him no favors, & I do society no favors by unleashing yet another self-indulgent, undisciplined adult into a culture that is full to the brim with undisciplined adults.  I use the term adult loosely.

Children who know their parents will make them face the consequences of their actions often think long & hard about what they do.  I did.  My parents never blamed a teacher, or a principal, or a coach.  If they had an issue with someone who'd disciplined me, they didn't discuss it in my presence.  I knew trouble at school meant trouble at home, & the trouble at home was typically much more severe than the punishment the school doled out.  I was so, so, so incredibly angry at my parents at times, & I know this likely pained them, but they stood their ground.  I see their wisdom now.  It is a disservice to raise a child who believes nothing is his or her fault; it is a disservice to the child, & a disservice to the people who will have to deal with their entitlement minded attitude.

I believe that if people knew they did not have someone else's money to rely on when the medical bills pile up, some of them would make better decisions.  I would rather my tax dollars be spent on an insulin pump for a young child with type 1 diabetes, a disease that nothing in the world will prevent or cure at present, than be used to pay the medical bills of an individual who refuses to do what is necessary to prevent the maladies that afflict the obese.  I would rather my tax dollars be spent on diabetes research than rehab for an alcoholic; curing diabetes should be a priority since it is quite obvious how to end the perils of alcoholism.  My daughter can't make her own insulin, but you can stop drinking, & you can change your eating habits, & you can get off your couch for an hour or two a day.  Is it hard?  Of course.  But it is possible.  As Dr. Ablow states,

We have gone way too far down the road of suggesting that addictions, in general, are beyond the control of individuals.  When an alcoholic chooses alcohol over being available to his or her family and friends, that person is making a decision.  When a heroin addict chooses heroin over financial stability and performing well at work, that person is making a choice, too.  And the choice is not beyond that person's control.  It is a measure of how much discomfort that person is willing to endure, in service to himself, and others.

When Reagan was first diagnosed in January of this year, I missed a few days teaching to be with her in the PICU.  When I returned to work & stood before my classes, I briefly explained my absence.  One student, upon hearing that Reagan had been diagnosed as diabetic, said, "Oh, you can get a check for that!"  I didn't respond.  I didn't even look up for a few seconds, pretending to be occupied with my roster or text or something.  I just moved on with class, resisting the urge to explain that no, no I cannot get a check for that.  The only time the government sends a check to my address is if we've paid too much in taxes (as if we don't always pay too much in taxes).  That student's statement stuck with me, & likely always will.  "Oh, you can get a check for that!" as if, rather than learning we were dealing with an incurable disease, my child & I had just won some sort of lottery.  This is the state of our nation, folks, & it is dismal.

Soon after Reagan's diagnosis, Trey must've been doing a little googling because one day he rattled off a list of type 1 diabetics, & included on that list was Sonia Sotomayor.  She is, for those who aren't cool & can't name all nine members of the U.S. Supreme Court, a sitting Supreme Court Justice.

Justice Sotomayor was diagnosed at seven.  She has lived with diabetes for over fifty years now.  In the prologue of her memoir, My Beloved World, she recalls a morning fight between her parents over who was responsible for injecting her with the daily insulin she needs.  Without a word, seven year old Sonia walked to the stove to begin to boil the water needed to sterilize the needle & glass syringe required for her injection.  Disposable needles were not yet available at that time.  From that morning on, she took on the responsibility of managing her diabetes.  She goes on to discuss the discipline required to manage her diabetes, & how it has helped her in other areas of her life.  Justice Sotomayor's  advice to the parents of children with type 1 diabetes: "Don't stand in the way of their dreams, don't stand in the way of their activities, don't stand in the way of them taking control of their own lives.  Teach them; don't do it for them."  The chasm between Justice Sotomayor's political ideology & mine is deep & wide, but, knowing what it takes to manage type 1 diabetes, I have to admire the tenacity of a child who shouldered that responsibility at seven years old.  Knowing that she was able to keep herself not only alive, but healthy, with little help from her parents, it is not at all a surprise that she now sits on the nation's highest bench.

Reagan, dear, it grieves my heart that you will deal with your disease for the rest of your life.  It grieves my heart that there is nothing you or I can do, or stop doing, to eliminate your diabetes.  I am hopeful & prayerful that a genuine cure will be found in your lifetime, but for the foreseeable future, I, & then you, will be responsible for performing the many important functions of a pancreas.  It is not an easy job, but it is certainly doable.  It takes tremendous discipline.  Caring for you these past few months has made me a more disciplined person in numerous areas of my life.  I know that you have enough of my anal retentiveness in you that you are going to excel at caring for yourself; you are going to want the numbers as perfect as I do.

Reagan, I want you to reject the disease label.  Nothing about you speaks to disease.  You are vibrant & beautiful.  You need insulin.  Guess what?  Everybody needs insulin.  Yours is delivered a little unconventionally.  Be whatever in the world you want to be.  Be a Supreme Court Justice (a conservative Supreme Court Justice).  Be a doctor.  Research diabetes (relying on your father's math skills).  Become the president of the United States, assuming that's an option when you're old enough & the Chinese don't own us.  Don't be defined by your diabetes; let the self-disicpline required to manage diabetes seep into every other area of your life.  Be defined by your self-disipline, because, as Plato said, "the first and best victory is to conquer self."  Whatever it is that you want, if it's worth having, attaining it will require self-discipline, whether it is beautiful blood sugar numbers, an English degree, a thriving Christian marriage, or a seat on the Supreme Court; you are certainly capable of achieving all four.