A Recipe for Cake


I think I've slept enough now to fill you in on Henry's birthday party, at least what I remember of it.

Where to begin?  I suppose I'll start with last Friday, which was Henry's birthday.  Friday went swimmingly, which, in hindsight, should've been a clue that things would take a turn for the worse come party day.  Henry spent his morning lounging in his new anywhere chair.  The chair is upholstered in Pottery Barn Kids madras plaid, & it matches the quilt, monogrammed pillow, & curtain panels in Henry's room.  He's thrilled with all the coordination. 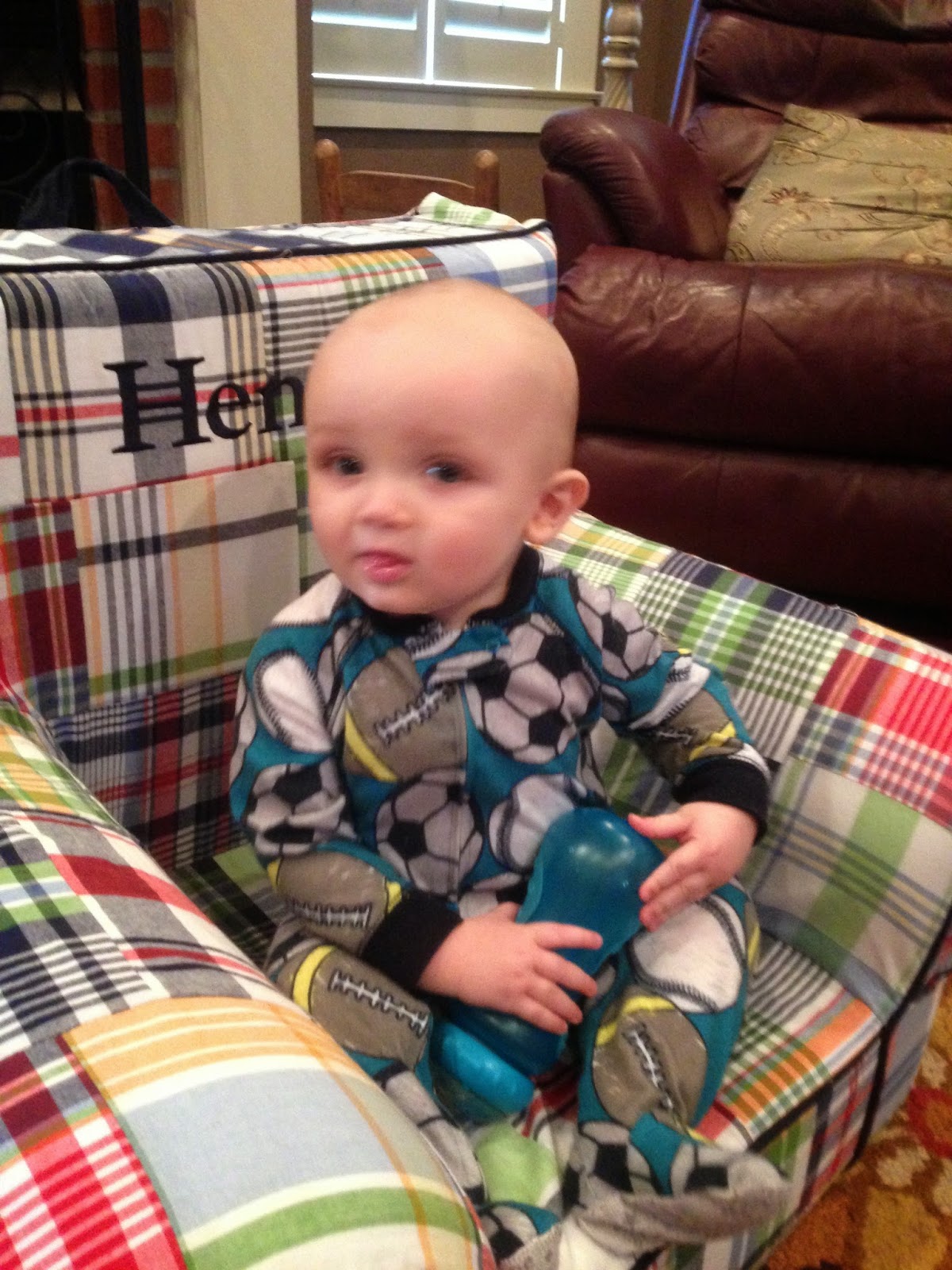 In this pic I believe he was throwing his sippy cup at me: 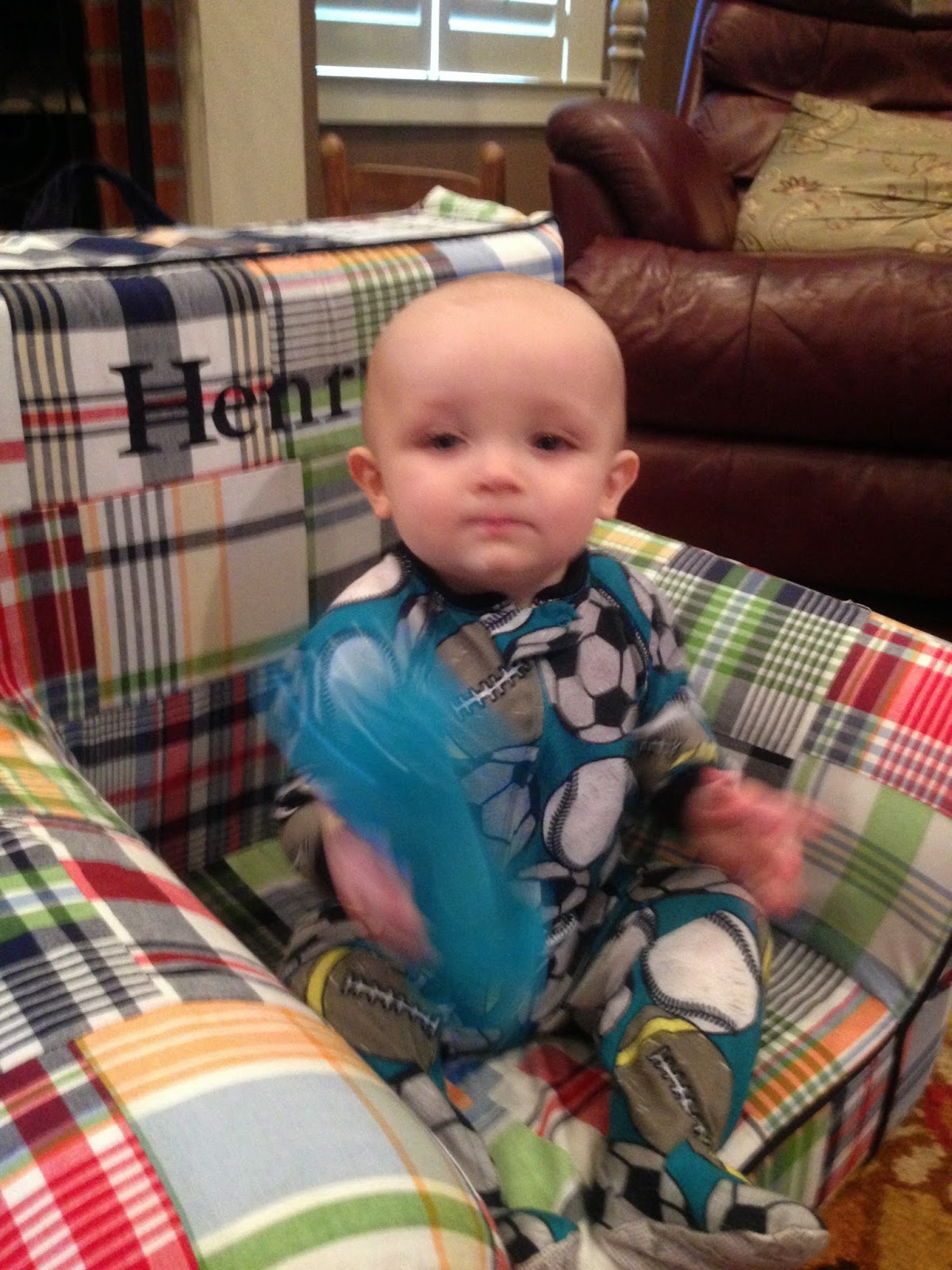 This is Reagan with her anywhere chair, which she received on her first birthday. 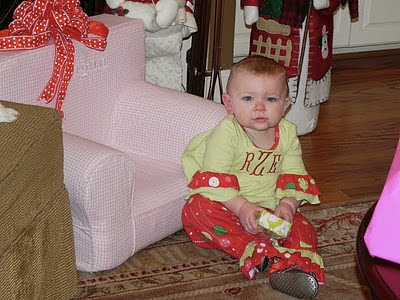 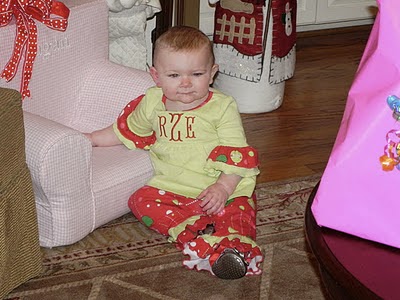 The kids & I had a nice day at home Friday.  Henry took a long nap that morning, which meant I took a long shower & was able to put on clothes & dry my hair with only minimal interruption from Reagan, who asked me questions every five minutes about when exactly she was going to get to eat cake & open Henry's birthday gifts.

Friday evening we all went to dinner at The Warehouse. 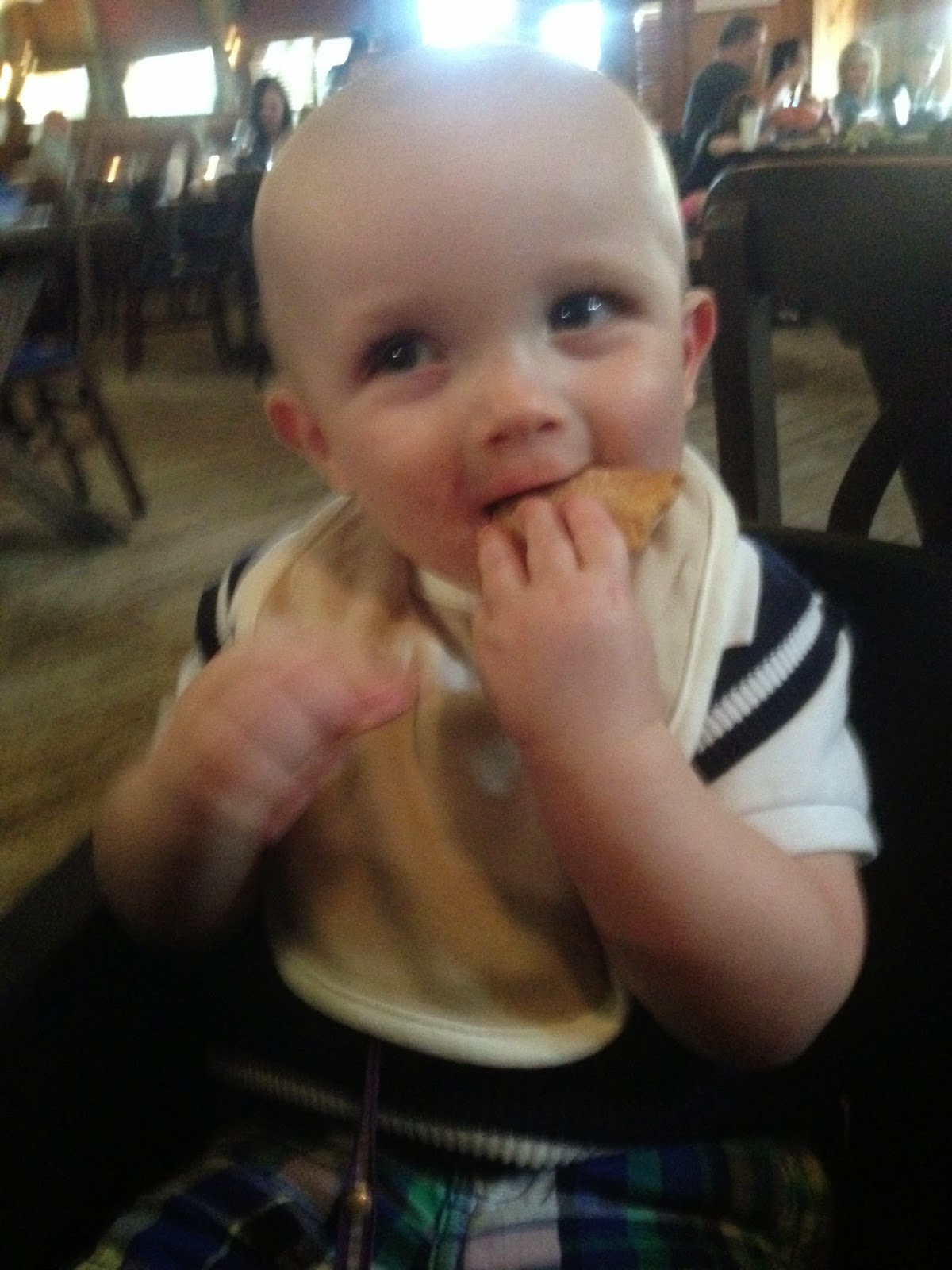 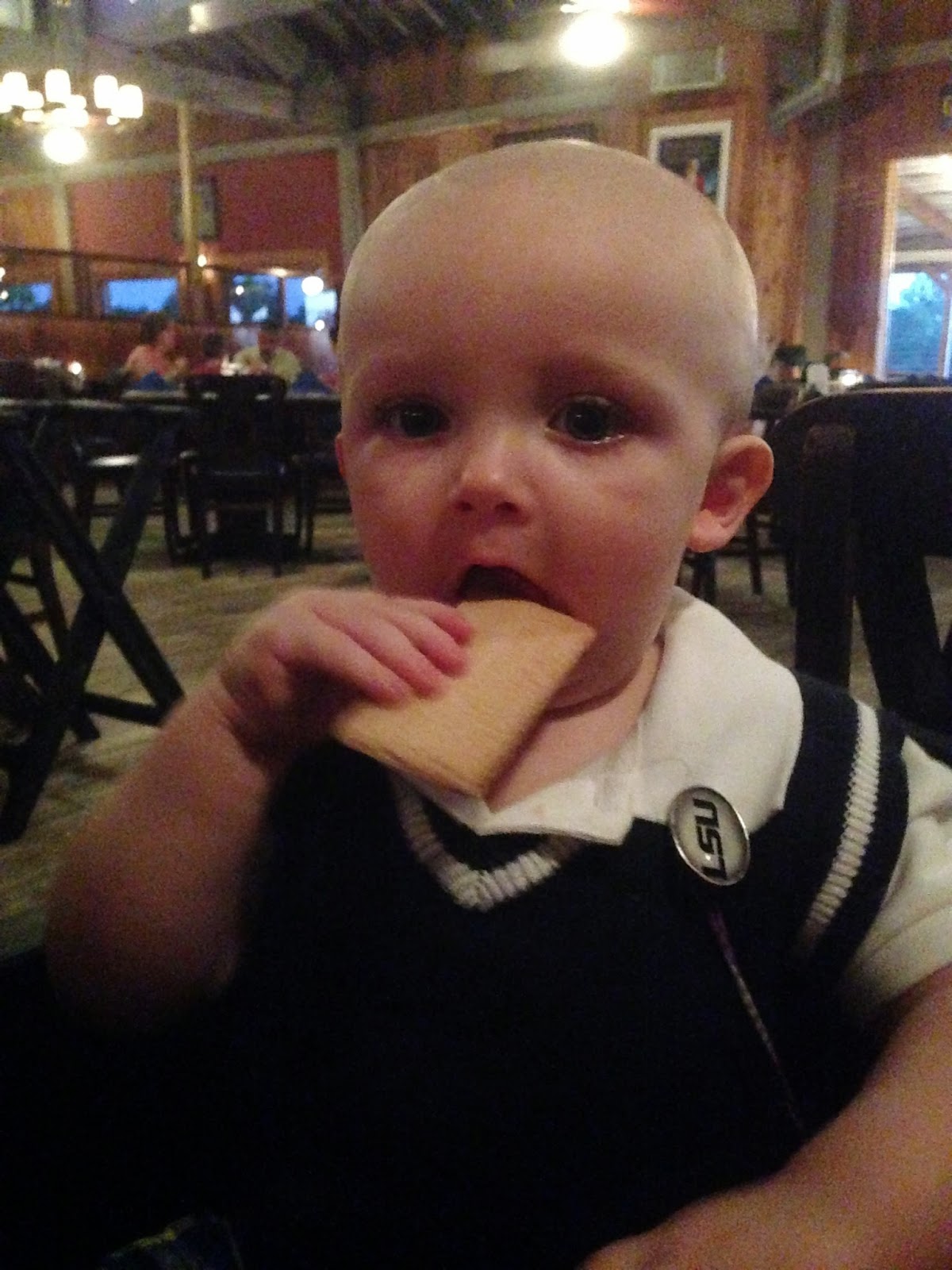 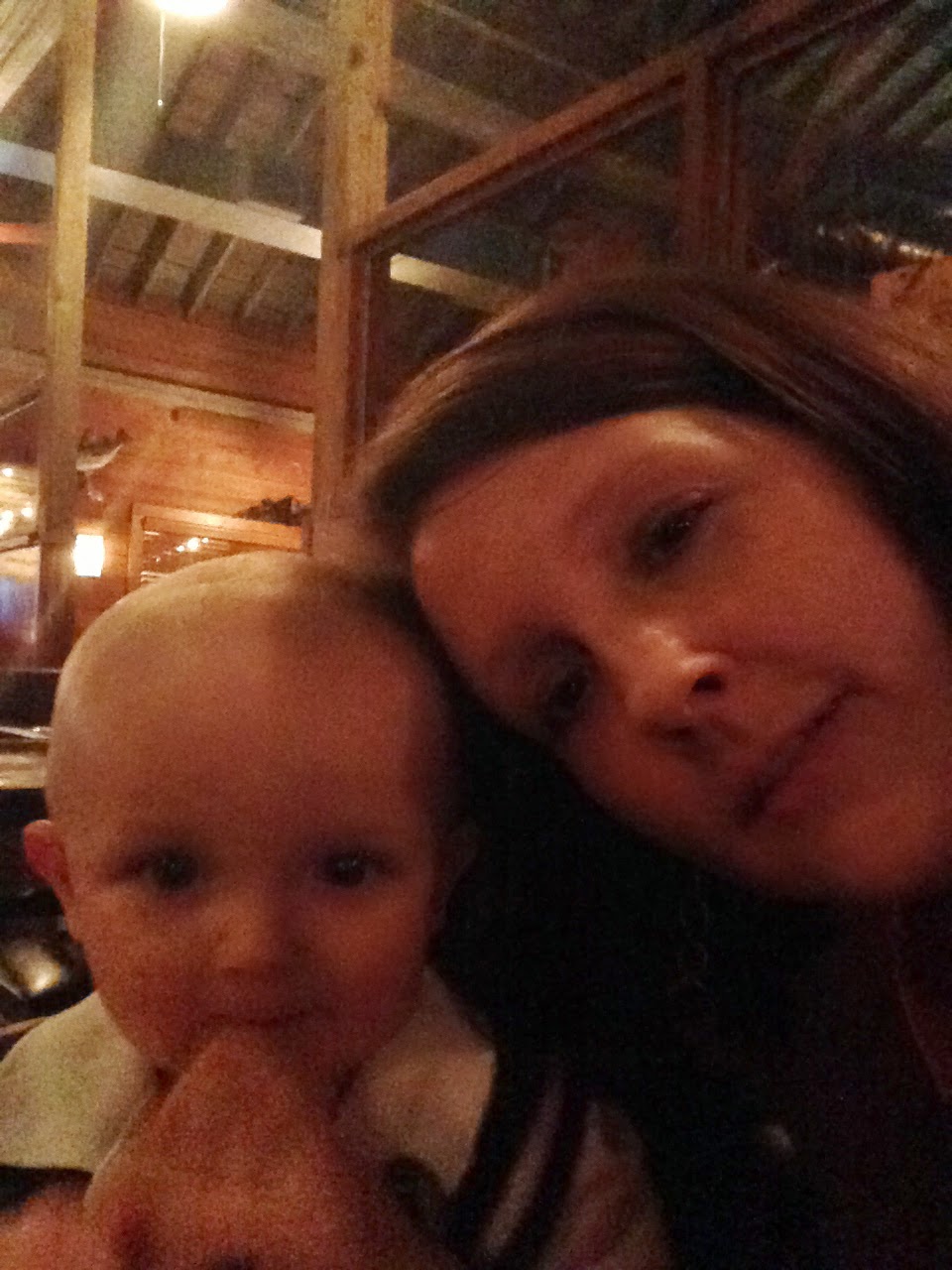 A little sibling time during dessert.  And by sibling time, I mean Reagan leaving her chair to confiscate the new toy Henry's Grandmama brought him: 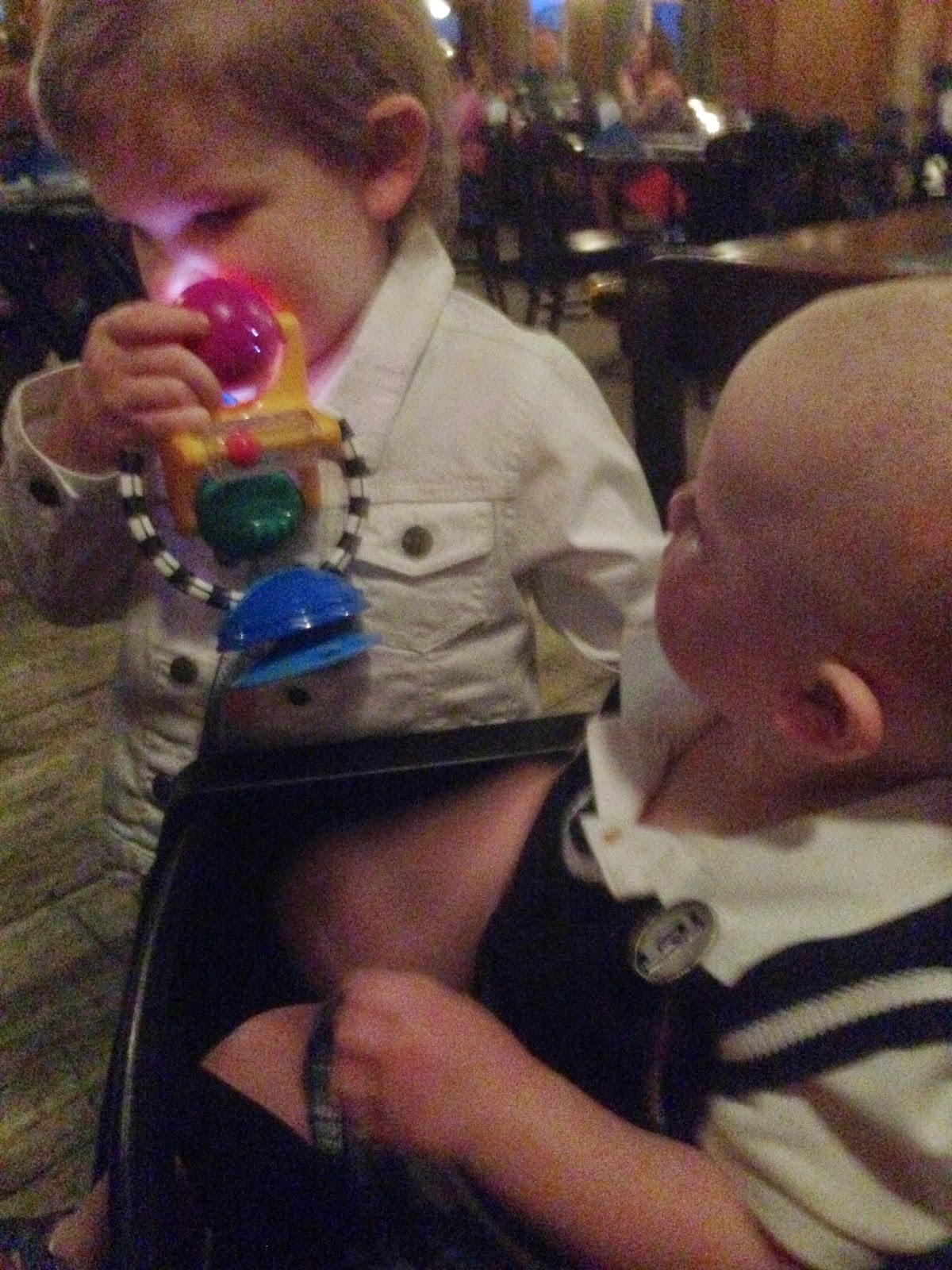 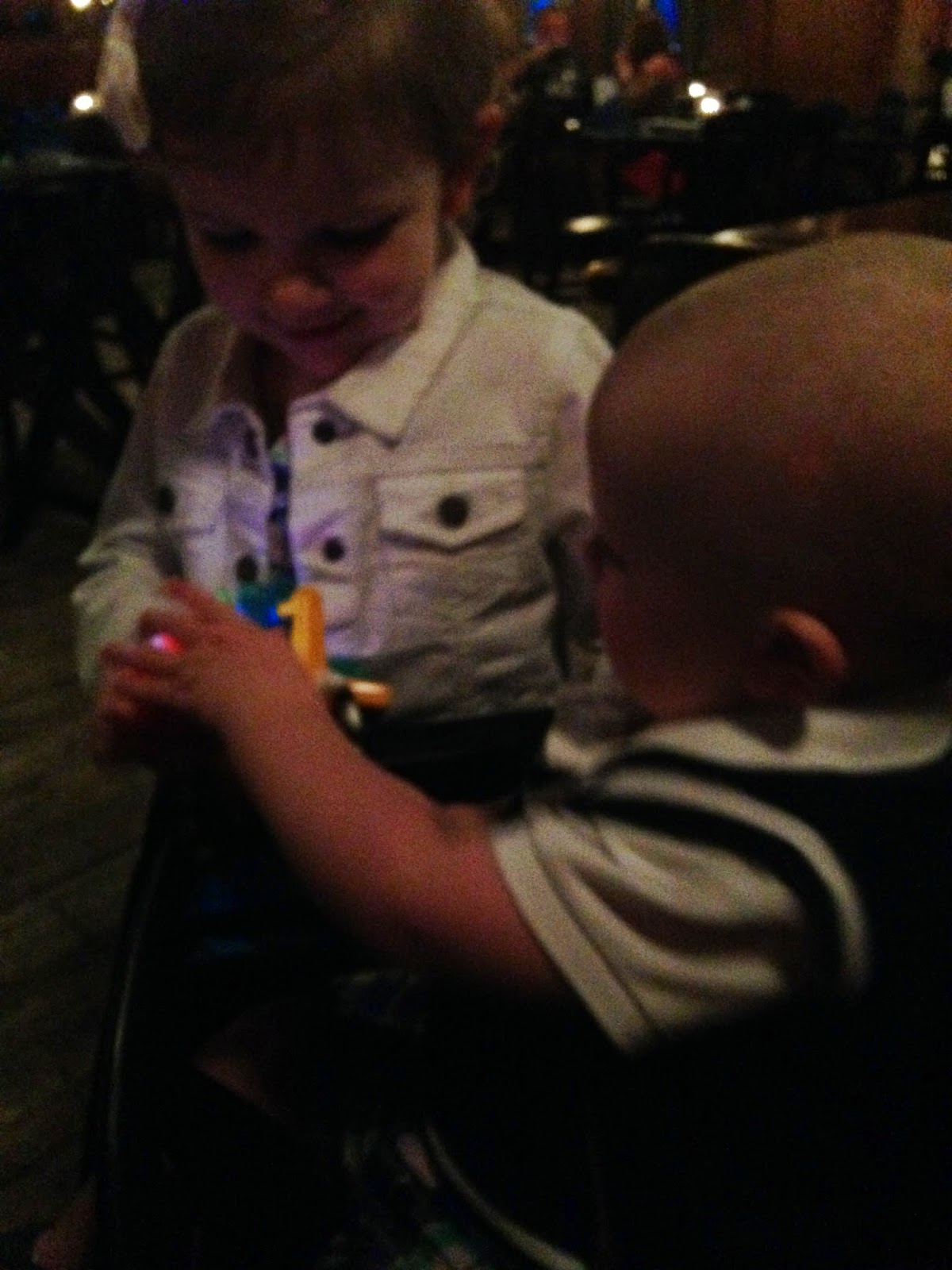 When Friday ended, quite literally, all the birthday loveliness vanished.  Around midnight, Henry started coughing.  It wasn't just any cough, either.  He was wheezy, & frankly sounded like he'd been smoking a pack a day for several years.  From approximately one o'clock until three o'clock Saturday morning, Henry & I wrestled in bed as I attempted to prop us both up in a position that would allow us to get some sleep, while also aiding in the cessation of Henry's cough.  I failed miserably; he continued to cough, & neither of us slept much at all.  At three o'clock, Trey got in the recliner with him, & I hooked up the nebulizer because I was worried about Henry's breathing.  The thing you want to be doing at three in the morning the day you're having lots of people over for a birthday party is digging in your bathroom drawers to find all the parts to the nebulizer.  Oh & also, somewhere in the middle of all this our dog, Sophie, who is not the spring chicken she once was, urinated in the middle of the kitchen floor, so I cleaned that up.  The only thing better than hooking up the nebulizer for your infant at three in the morning is sopping up a puddle of dog urine.

Just as I was shutting down the nebulizer & about to flee to the bed for a few hours of sleep, I heard Reagan stirring.  By the time I'd aided her in her middle of the night bathroom quest, it was almost four in the morning.  I slept for about two hours before rising to prepare for a trip to the pediatrician's office, where we learned Henry had the croup.  I'd heard of the croup, but didn't understand that what it is, exactly, is this horrendous animal sounding cough.  Henry was prescribed some medicine, & thankfully no longer sounds like a future Marlboro Man.

I returned home with Henry around nine Saturday morning, drank a little more coffee, or maybe a lot more coffee, & headed back to town to pick up his cake, some balloons, & other needed party items.  It's all a blur.  Miraculously, I made it home having forgotten nothing. 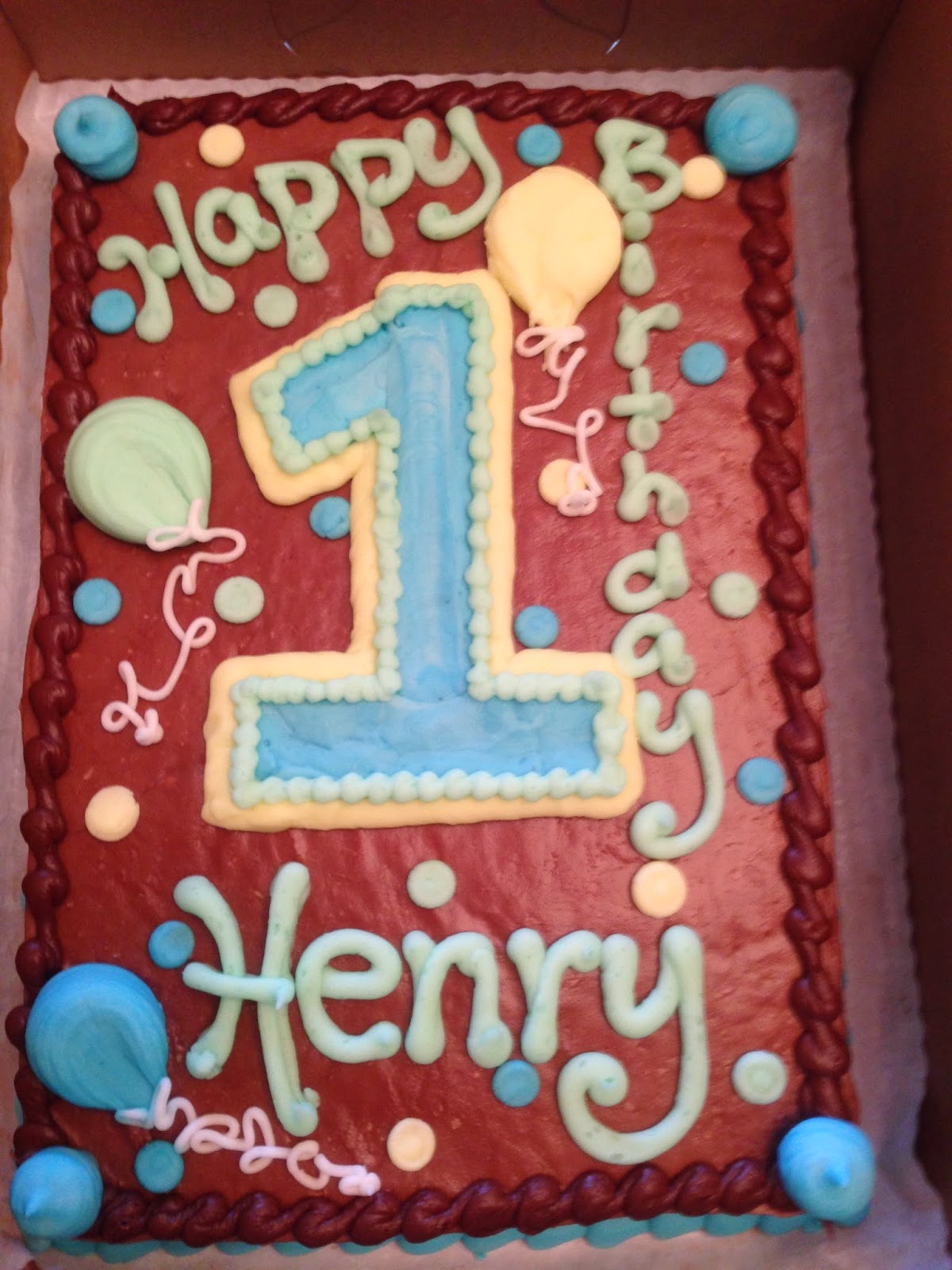 And the smash cake: 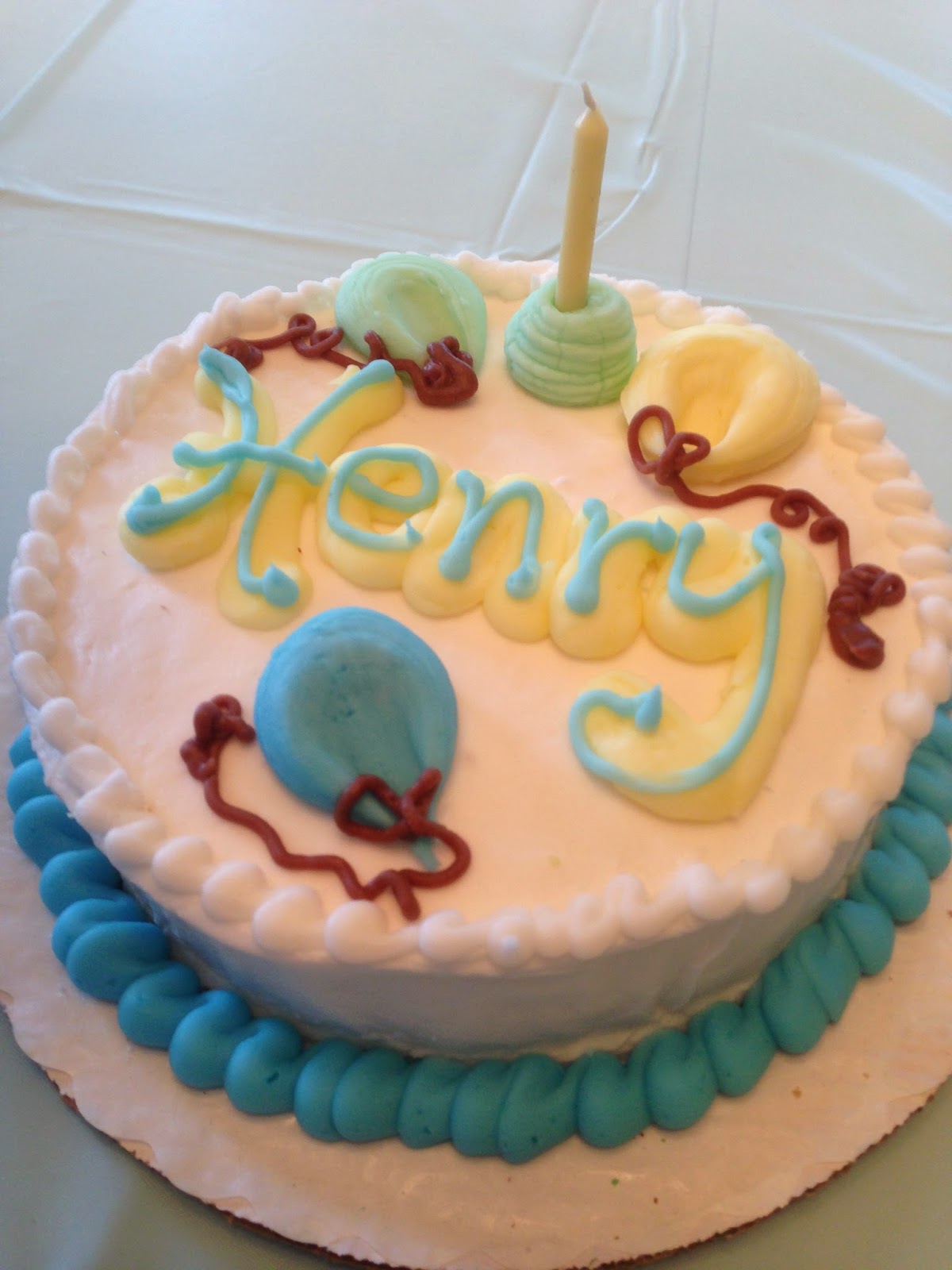 I found this plaid '1' candle because everything's better with a little plaid: 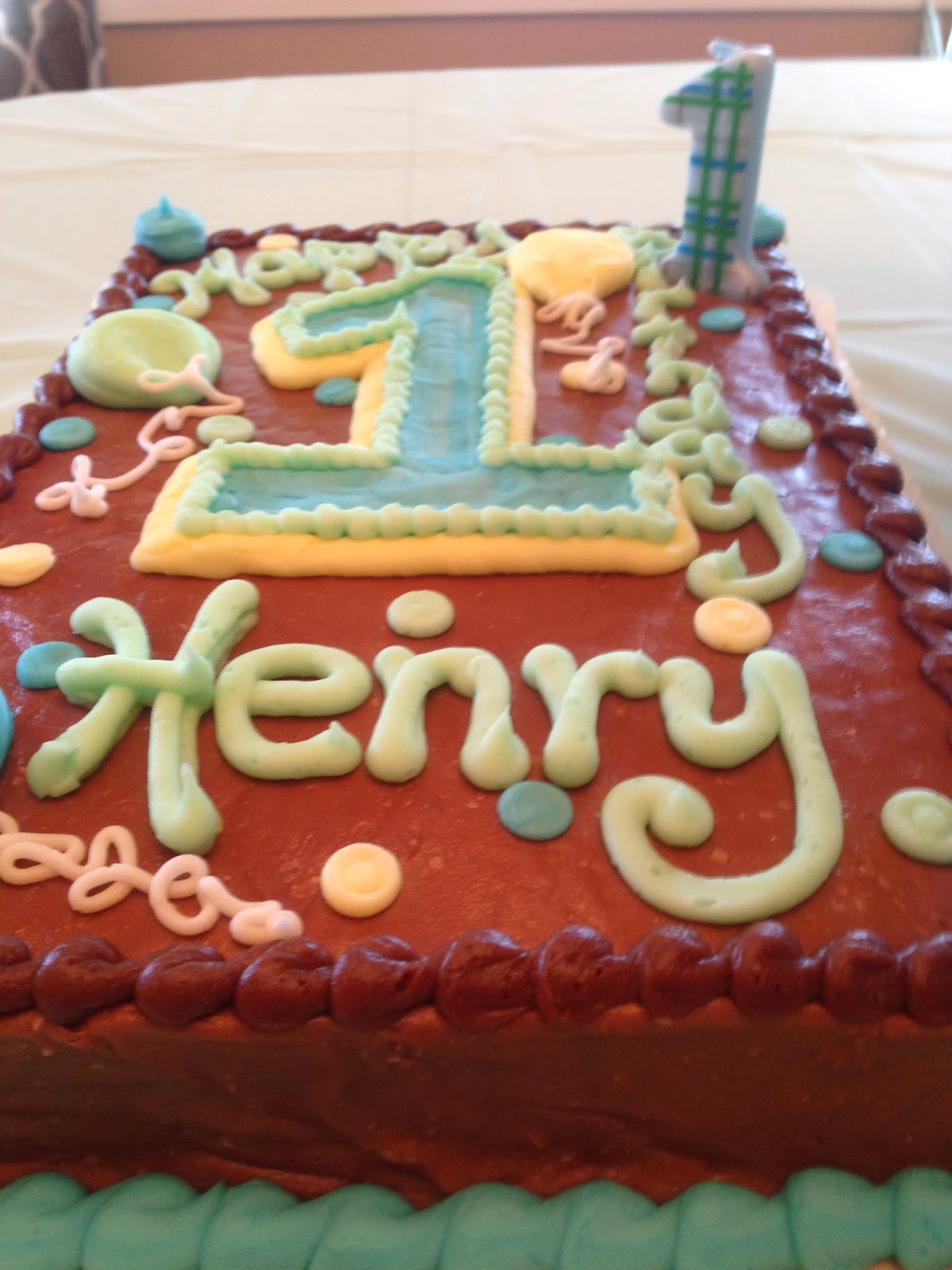 Ready to party.  Actually, Henry & I both needed a long, long nap . . . but sometimes you dig deep & push through because it would be weird to invite people over & then miss the whole shindig because you're curled up in the bed with the birthday boy. 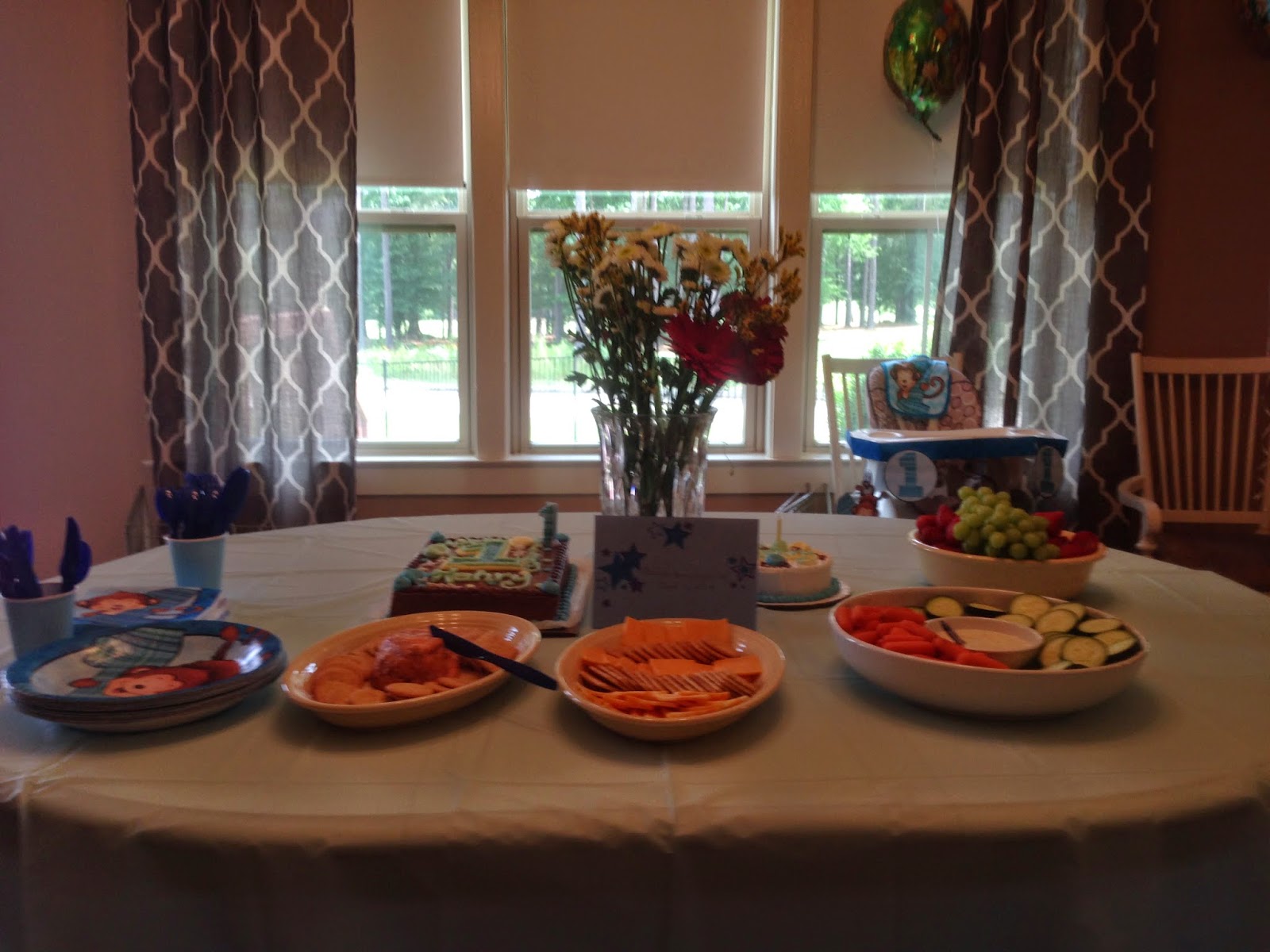 Reagan was less than thrilled with the carrots & cucumber I set out for her.  I wanted her number nice & low when I jacked her full of insulin in preparation for the cake & ice cream, which, in technical diabetic language, are known as a heaping ton of carbs. 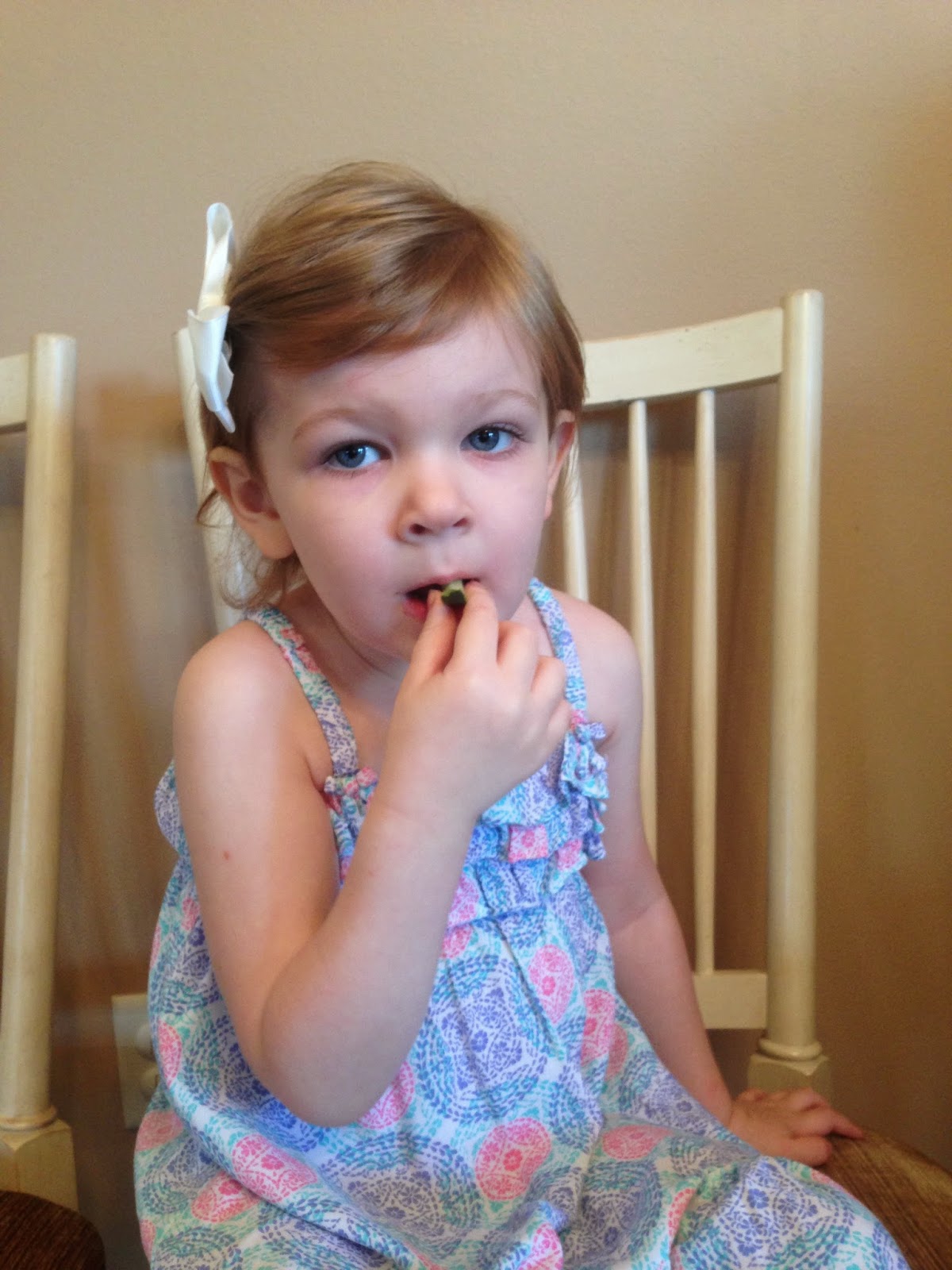 Henry in his new ride.  Please note his sweater vest with a flourish of argyle & coordinating plaid shorts: 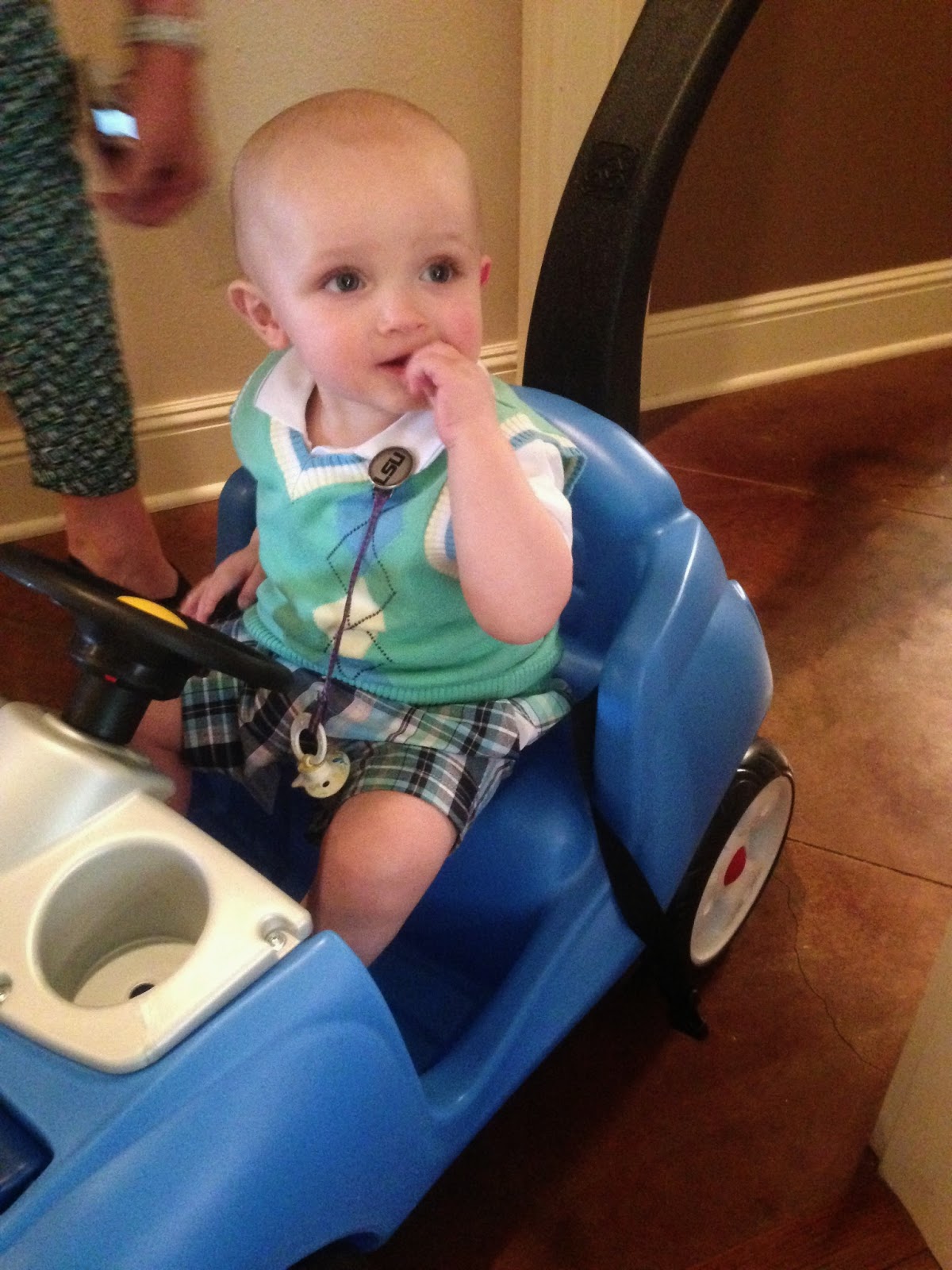 Henry didn't do much cake smashing.  He was so, so tired. 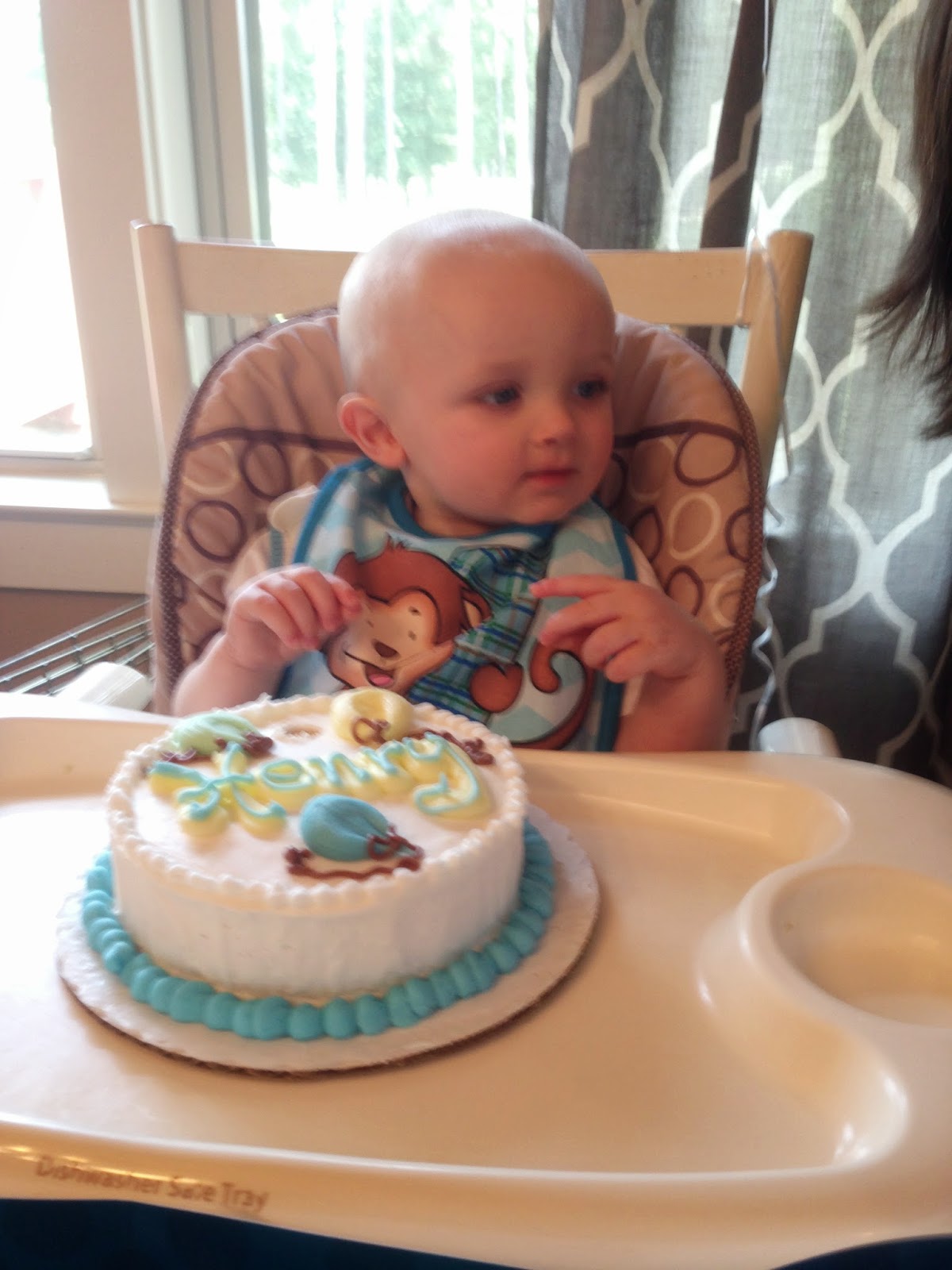 This is the box in which Henry's smash cake was enclosed.  If it's any indication of how tired I was, someone else pointed out to me that my last name is misspelled; I had not noticed.  I'd normally spot something like this a mile away. 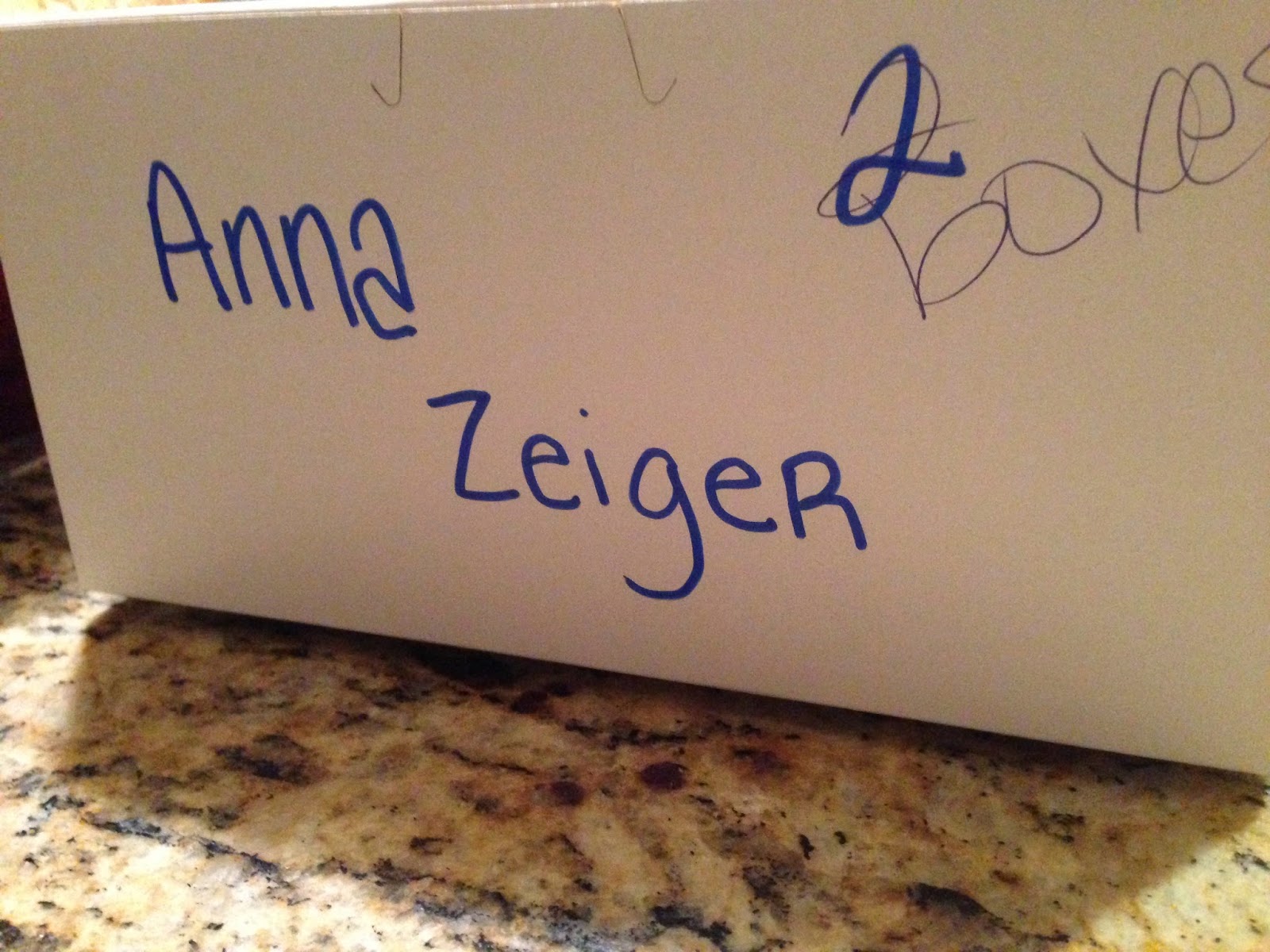 Saturday night after the kids were asleep I could have, & probably should have, gone to sleep myself.  However, I had yet to watch that week's episode of 24.

I don't need to spell out what happened next . . .

It all adds up to a huge helping of Henry's birthday cake.  I enjoyed it immensely, & it has not shown up on the scale (yet).

Sunday offered no respite.  After church & lunch, I shuttled the kids home, changed their clothes, & had about twenty minutes to drink some coffee before handing Henry off to my mom so I could take Reagan to a birthday party for her friend Wendi. 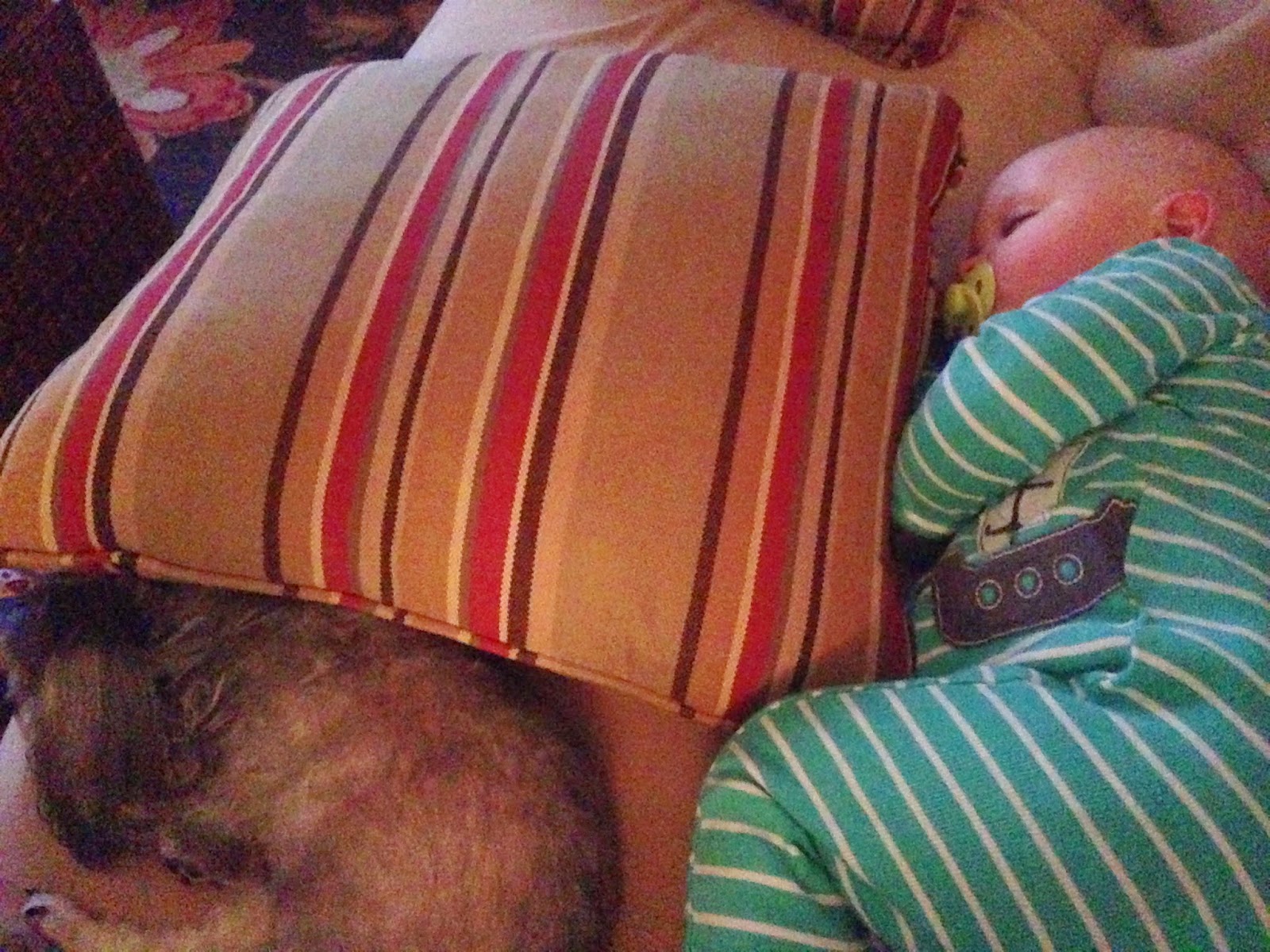 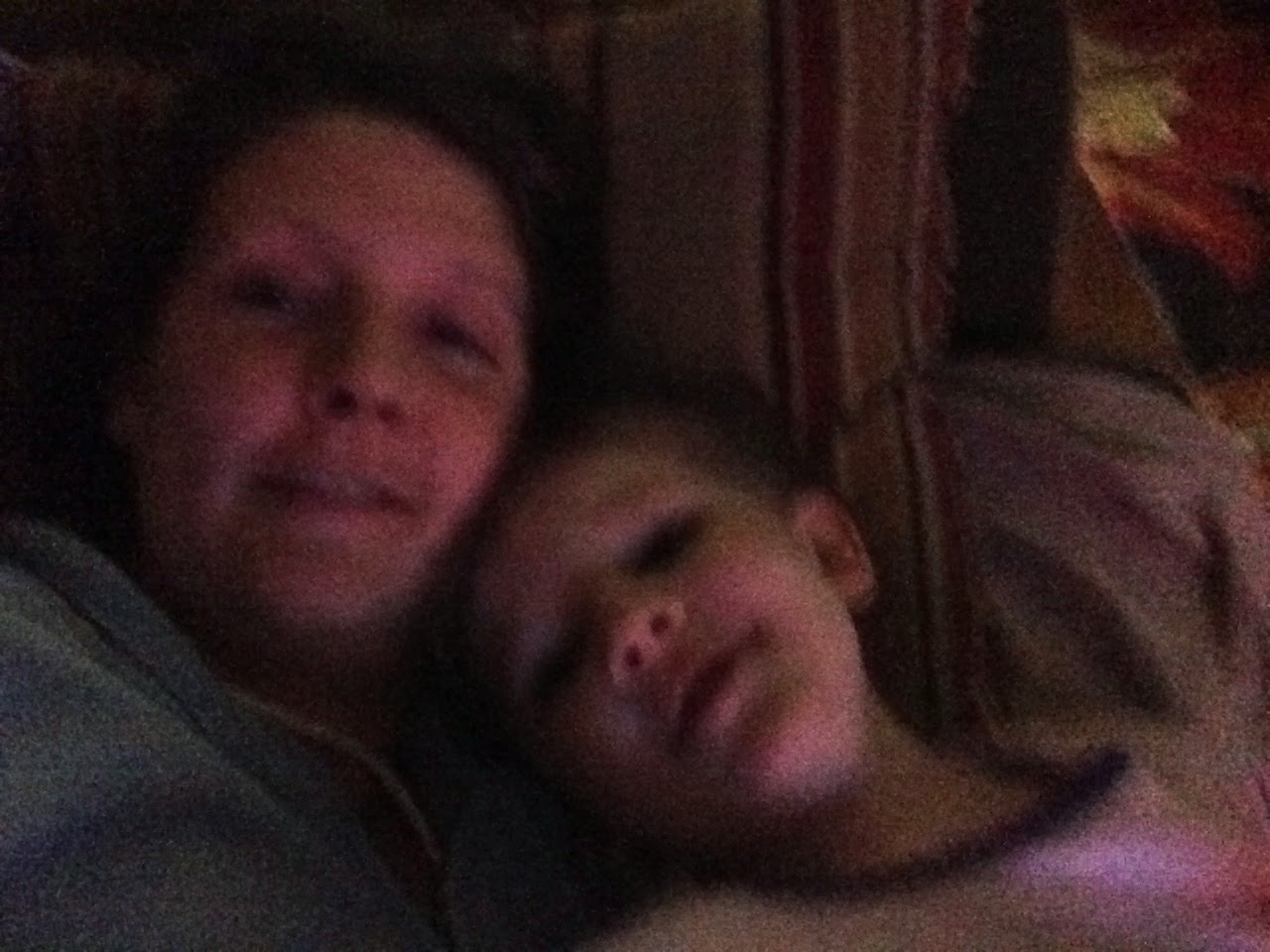 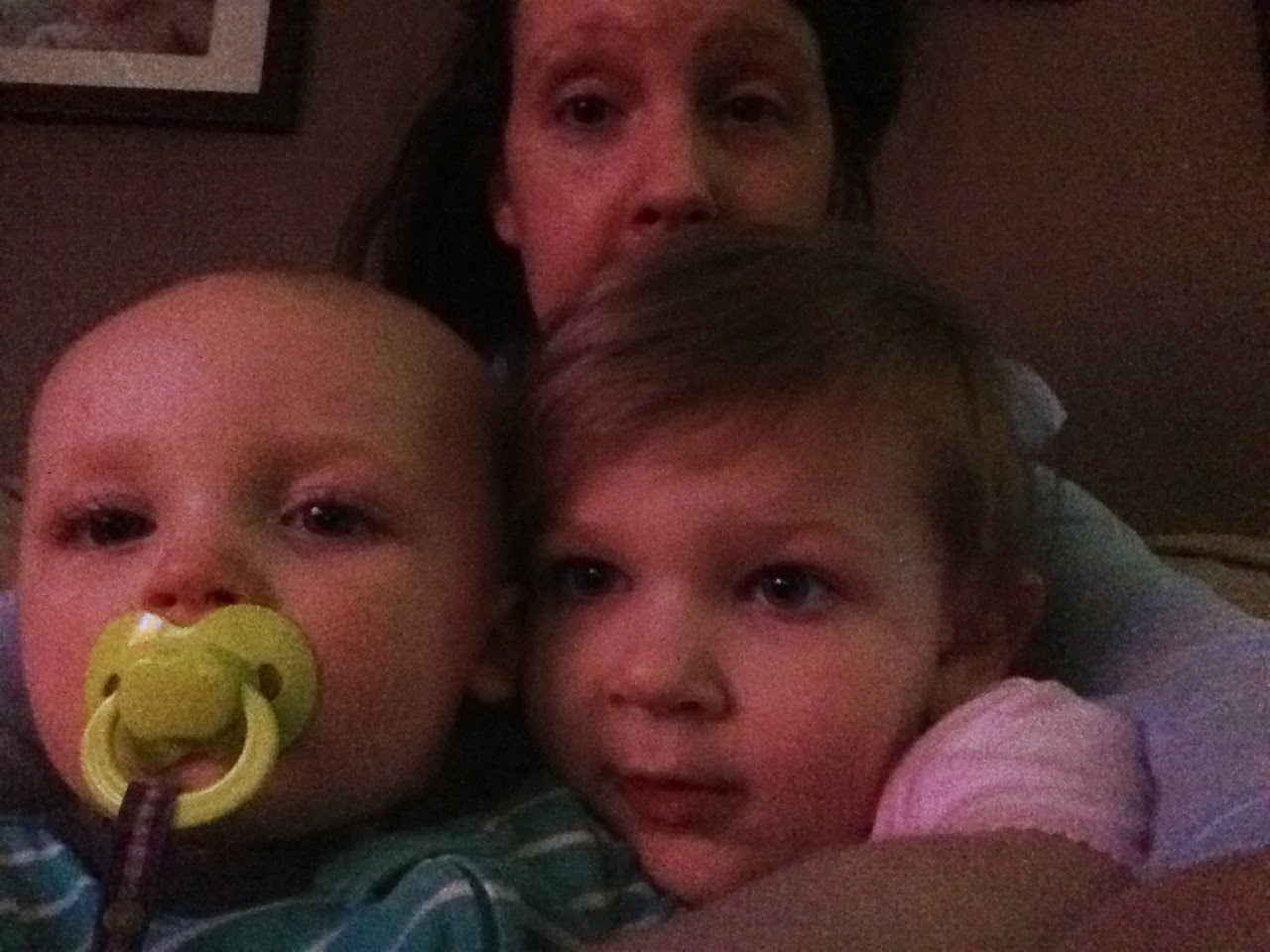 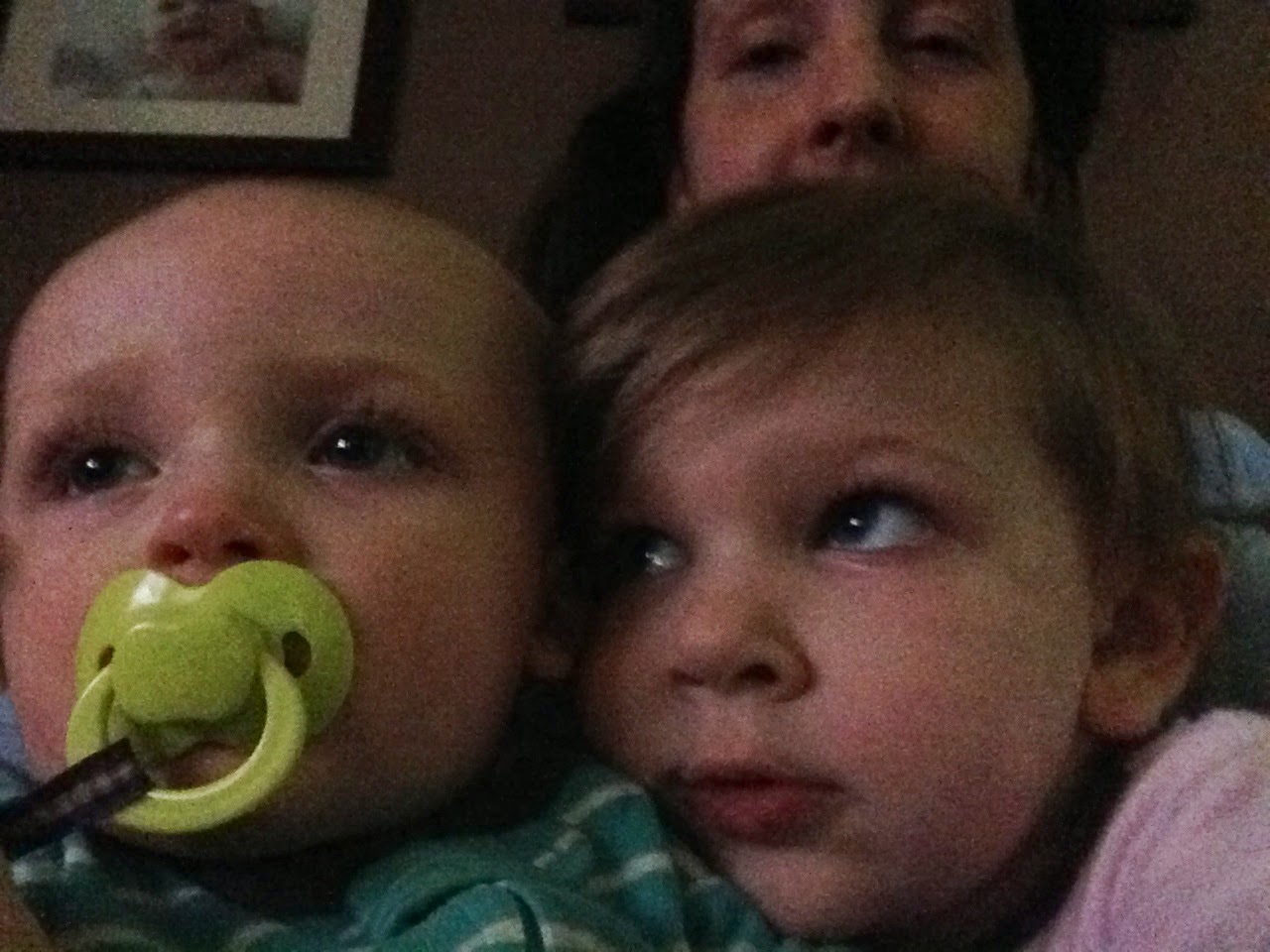 Before I leave you, I'll update my summer stats.  Despite Saturday evening's cake, I am still down five pounds (sometimes six!).  I have read The Fault in Our Stars, which I rant about here, if you missed it.  I have a date with myself later today to see the movie (it's a gift to Trey really, giving him a chance to spend some one on one time with his kids on this Father's Day weekend).  I am meandering through a reread of A Farewell to Arms, which is just delicious, as always.  I find a new favorite line every time I reread it.  Edie's continuing saga still sits at 9,100 words because I know better than to go near it when I'm as tired as I've been the past week; I can be a bit vicious & characters end up saying & doing things that they'd otherwise never consider.  I am thoroughly enjoying Michael Buble's To Be Loved album.  He sings a duet with Reese Witherspoon that is wonderful (it's No. 5 on the album).  Plus, no matter what song is playing, this picture below pops up on my iPhone, so there's really not a bad song on the album. 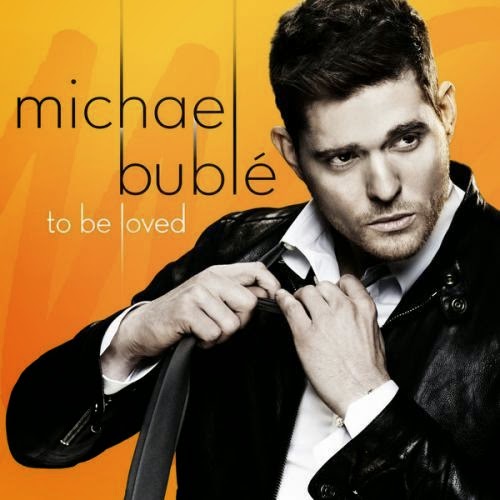 Both Diet Coke & cable remain on the banned list in our home.  To my knowledge, Trey has yet to drink any Diet Coke since giving it up cold turkey over a month ago.  I had a momentary cable crisis Tuesday night when I learned Eric Cantor lost his primary; I was craving a little Fox News, but I just reminded myself that even if we had cable, it's not like I'd be able to sit down with my decaf & watch.

Is anyone else a little giddy about Cantor's loss . . . (is it politically incorrect to say Adios, Senor Cantor?  Even if the remaining dolts in DC don't want to admit it, we all know why he lost.  Amnesty's not cool, y'all.  Not cool.  I am looking at you, Paul Ryan!).  You go, Dave Brat!  Rock on with your PhD & your $150,000 campaign.

This fall promises to be muy interesante.  Between mid-term elections & college football, if we're still a household without cable, a plateful of birthday cake is unlikely to placate me.