Though it's been years since I was a student, I had two major tests last week.  The first was Reagan's appointment with her endocrinologist, specifically her first A1C number post-diagnosis.  As you already know (unless you've fallen behind on your blog reading . . . catch yourself up here), I passed the first test.

The second test came on Thursday.  Before I divulge the details, I'll tell you that I failed.  Large red letter F.  Like this: F.

On Thursday of last week, the Trey Zeigler family was scheduled to arrive at the church building at 8:40 in the evening to have our picture made for the forthcoming church pictorial directory. I know you're thinking, 8:40 at night, really?  Yes, really.  That's partly on me because signing up for a time slot during which to take pictorial directory photos was not at the top of my priority list, so when I got around to it, there were few options available.  I did think it was odd that an 8:40 time slot was even an option, but, okay.  We are all night owls, so I thought the 8:40 time might actually work out.  It may've worked beautifully; I guess we'll never know.

Last time we had pictures made for the church directory, Trey totaled his car on the way to meet Reagan & me for the photo session.  You can imagine what that did for my mood as I wrestled a six month old Reagan & attempted to follow the (often weird & nonsensical) instructions of the the two strangers the church hired to take pictorial directory photos.

At long last, the three of us finished posing in every possible formation & were mercifully allowed to wipe the phony smiles from our faces.  Then came the sales pitch.  I immediately & emphatically said no.  No we do not want to pay hundreds of dollars for copies of these 1985, Olan Mills throwback pictures.  After all, we were about to have to buy a car; I think I said that out loud.  We didn't have the official word from the insurance folks yet, but I saw the car, & I was pretty sure they'd total it.

Long story short, Trey caved & we ended up with a couple hundred dollars worth of horrible pictures of ourselves.  I haven't a clue where the pictures are today; we should have just taken the cash out of our wallets & burned it (along with the pictures!).  Also, Trey's Trailblazer was totaled, if you're curious.  When I have to drive his large, gas inhaling Toyota Tundra, I think about the expensive & awful pictures taken the day he totaled the Trailblazer, which, if you haven't already guessed, paved the way to his purchasing the Tundra.

With these pictorial directory memories fresh in my mind, & with an additional person thrown in the mix of awkward poses this time around, I got out of bed last Thursday morning with an ominous feeling.  Thursday's schedule was packed with rage-inducing activities.  My mom was coming over around ten to watch the kids while I went to turn in my final grades.  That sounds so benign, right?  So simple?  Just turn in the grades.  The hoops of paperwork through which I am asked to jump during this process known as "turning in grades" would astound you.  I am to electronically submit the grades.  I am to denote the last date of attendance for any student who withdrew from the class, or failed the class.  These dates have something to do with calculating financial aid; I wish the government would just ask me any questions they have about financial aid.  In the case of 98% of the students I teach, the answer is simple: CUT IT OFF.  IMMEDIATELY.

Once everything is electronically submitted, I am to print a hard copy of every page I submitted electronically (this is required by the same people who complain about the amount of paper instructors use in the printers & copiers, & who discourage us from making copious copies of things that can be posted online for students).  I am then to sign my name to every printed grade sheet, make copies of the printed & signed grade sheets, make copies of my grade book, & make copies of my attendance roster, & disseminate these copies to numerous offices on campus - - numerous offices in the same building, but they all need their own special copy of information that is online, the place they encourage instructors to post items for students, thereby avoiding needlessly wasting paper.

Now that I've set the scene for Thursday, I shall forge ahead with the pictorial directory photo fail tale.  I guess the short version would be, "I was already frustrated when I arrived home to prepare myself & the children to meet Trey for the picture session."  I said my goodbyes to my mother & assessed the work ahead of me.  I hadn't given much thought to what we'd wear.  I sat down with a cup of coffee, mentally selected outfits, & hoped nothing was excessively wrinkled because I was not about to iron.

When the coffee was gone, I changed the kids' clothes.  I packed all the bags - - diapers, wipes, bottles, baby food, a tiny baby spoon, insulin, alcohol wipes, sugar meter & strips - - we don't travel light.  The three of us met Trey at Outback, where we took our time & had a leisurely meal because, if you recall, we weren't expected for pictures until 8:40.  As I finished the last bite of my steak, I made a crucial mistake.  I thought to myself that I had pulled it off; no one had totaled a car, we had a pleasant dinner together, we all looked nice, we were running on time, & maybe, just maybe, we would take a nice family photo.

Fool.  I am a fool.  My optimism was short-lived (as were Henry's freshly washed khaki pants).  I don't want to get into the details both because I feel I should protect my son's dignity, & because it's possible you're eating as you read this.  It is sufficient to say that I had to make an executive decision: either Henry is forever enshrined in the church directory wearing only a diaper, or we cancel our 8:40 photo appointment.  I contemplated my options while changing Henry's diaper in the restroom at Outback, which was no easy task thanks not only to the mess on my hands (literally), but because the individual who hung the plastic fold-out diaper changing table on the wall in the ladies' restroom at Outback is an idiot.  Henry was level with my chin while I cleaned him up.  I hate to make a sexist comment, but it's apparent some dumb man who's likely never changed a diaper in his life screwed the changing table into the wall, & he missed the mark by several feet, unless of course a WNBA player traveling through West Monroe needs to change her child's diaper in the Outback ladies' restroom.

We all went home.  No pictures were taken.  I've been instructed to submit a family photo to the church secretary if we still wish to be pictorially represented in the new directory.  I just really do not care anymore.  Everyone knows who we are; you cannot miss my kids during services.  I don't understand why, in this age of iPhone cameras & digital everything, I have to dress & cart my kids up to the church at almost nine o'clock on a Thursday night to have strangers take our picture.  My campaign for a selfie church pictorial directory begins soon.

After the picture/non-picture incident Thursday, my Mother's Day weekend went pretty well.  Yes, the weekend would have been better had the news not been dominated by the ridiculous spectacle surrounding the drafting of the first openly gay NFL player, but, unfortunately, they don't let me control the news.  I mean really, who cares.  WHO CARES?  I don't care if he plays in drag if we could all just move on already.  For all the lip service they pay to the ideal of equality, the media wouldn't know what to do if they didn't have some perceived minority about whom to blather incessantly.  Equal means equal, right?  So if he's drafted, good for him.  If he's not, oh well.  Singling him out to such an extent that his draft status dominates the news for three days is not exactly treating him as equal to the other thousands of men hoping to be drafted.  *End rant.*

Saturday evening Henry gave me a wonderful Mother's Day gift: quiet solitude.  He fell asleep rocking with Trey while I was bathing Reagan, & he remained in a state of peaceful slumber when I picked him up & moved him.  I gleefully settled in bed with my coffee & my remote & Jack Bauer.  It needs to be said that it is fantastic to see Jack Bauer back on television.  I'd forgotten what a bright day he makes of otherwise blah Mondays.

Sunday was a full day for the four of us.  We went to church (see, we're there, in our Sunday best, every Sunday - - take our picture then!  Ahhh!).  We sat down at noon for lunch with my parents.  I was too busy to take any pictures, so you'll just have to imagine us happily eating our Mother's Day lunch (in much the same way our friends at church will have to imagine us in the pictorial directory).  If it helps, present were the four of us, my parents, Jessa, Heath, Maisie, my grandmother, & our good friend Jim DeMoss.

Shortly after one that afternoon, we sat down for lunch with Trey's parents, his brother Lance, his sister Deni, & her boyfriend Dow.  Lucky for you, Trey's dad took some pictures.  I wasn't as busy during lunch No.2 since Henry had already been fed, but I was too tired to take pictures.

This is Reagan with the flower I was given at restaurant No.1.  Reagan immediately claimed it, & I let it go graciously. 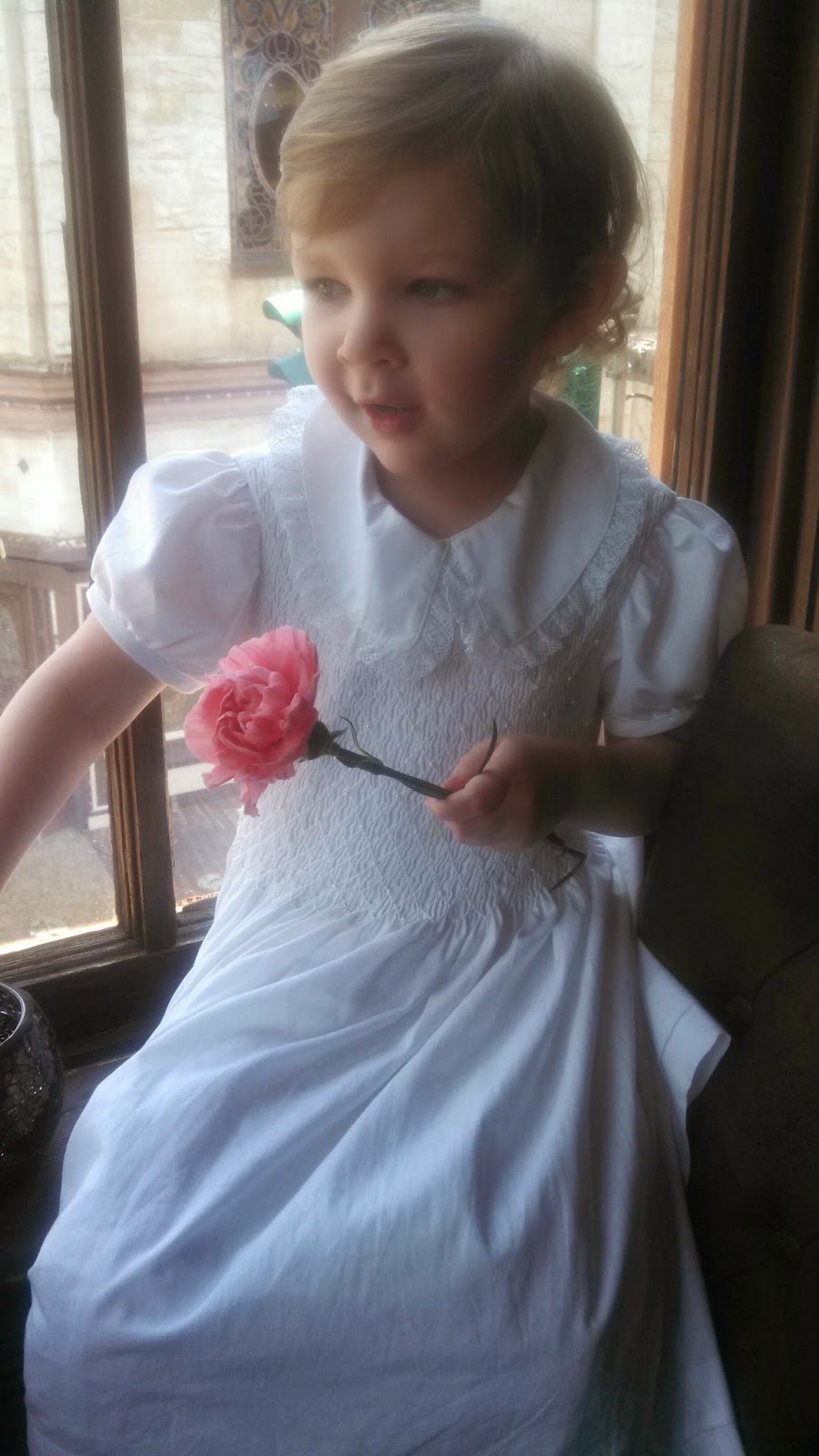 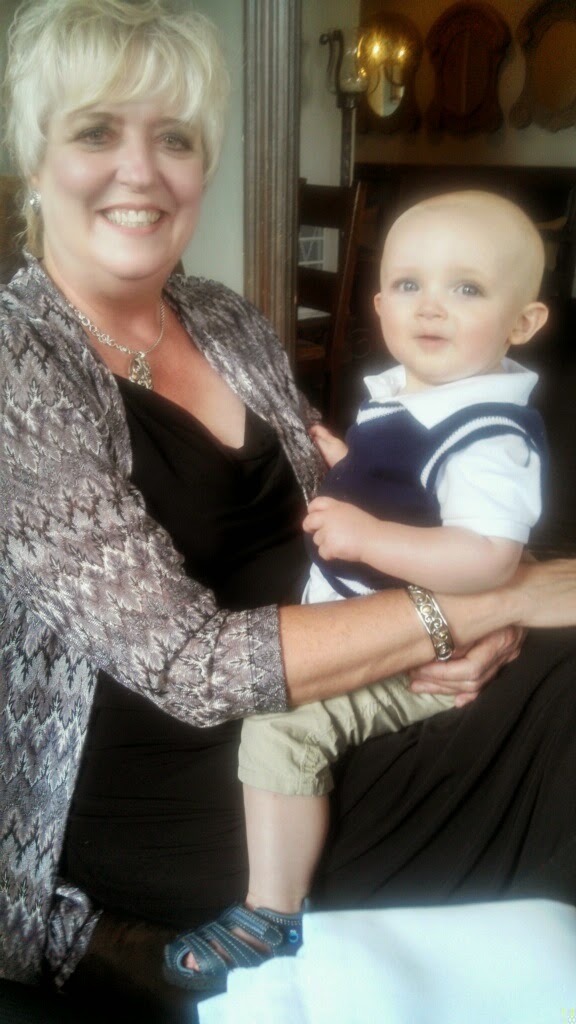 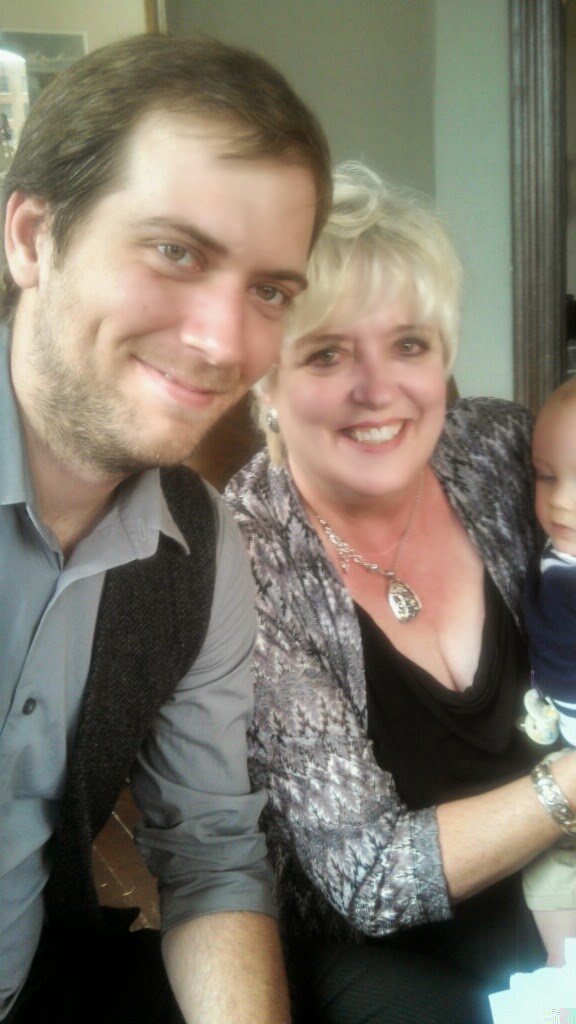 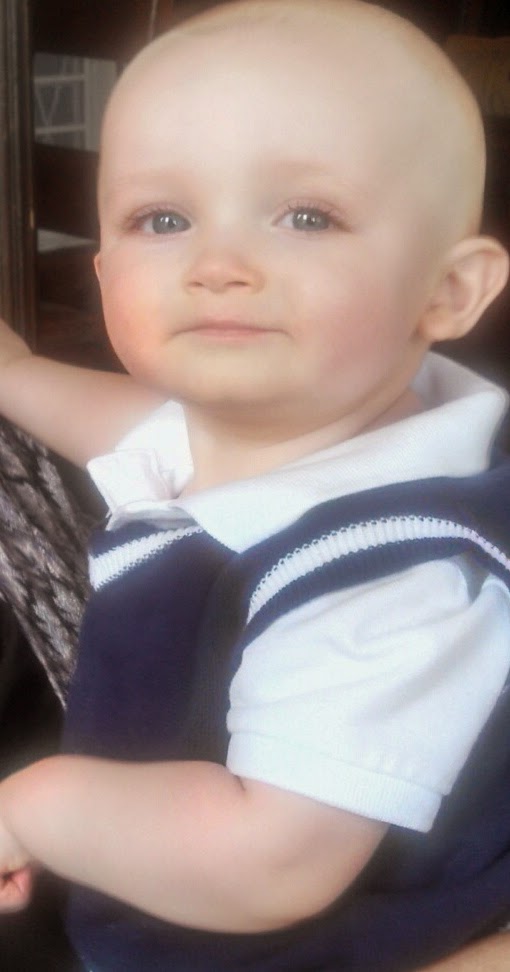 Deni & Dow (I think this is Dow's blog debut.  I'm sure his elation knows no bounds): 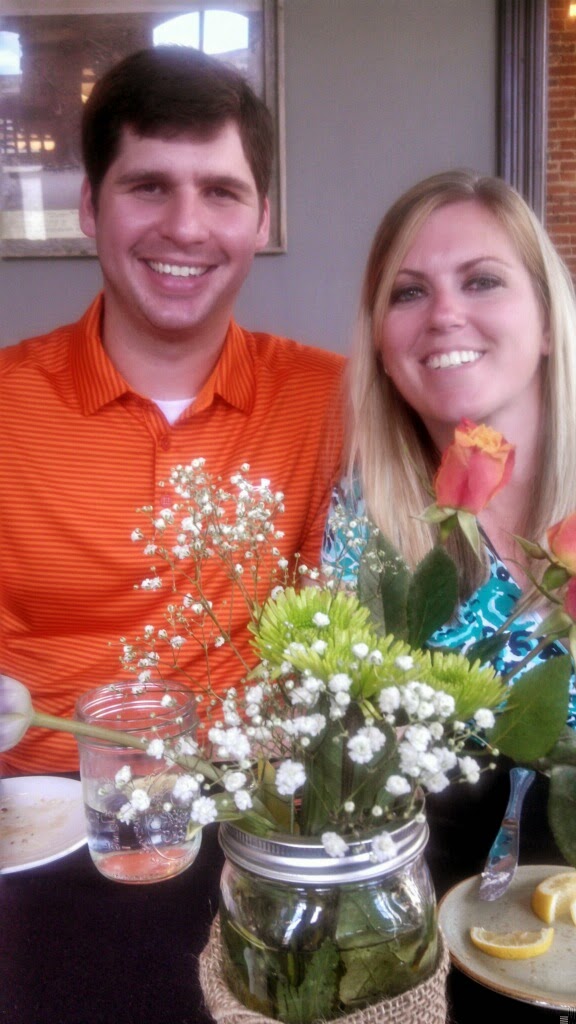 I'm sitting in bed typing this & uploading pictures & the thing is, a new hour of Jack Bauer is waiting for me on the DVR, so I am done here.  I don't think I had much more to say anyway.  After reliving the events of last Thursday, now is a great time for some Jack Bauer. 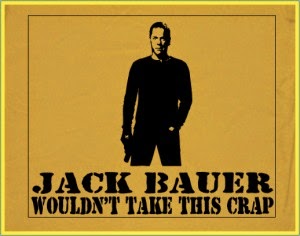