To Trey's credit, we legitimately needed some steak knives, & now we have some.  We have some for our little family of four, & some for our twenty closest carnivorous friends.  I didn't register for steak knives when we got married because, well, they're not very attractive & while I tried to be practical with the registry, looking back, I failed miserably in some areas.  On the bright side, if there's ever some sort of entertaining emergency requiring that I serve everyone we know finger foods using nothing but Arthur Court serving pieces, I am prepared.

Shortly after the arrival of the knives, Trey requested that I buy some steaks at the grocery store.  This seemed logical since we do have a brand new set of steak knives, so the steak request didn't phase me.  Then, last Thursday, Trey came home from work with another box.  Unlike the steak knives reveal, this one lacked suspense as this is what Trey lugged in the back door & placed on the table, all while wearing a mischievous grin: 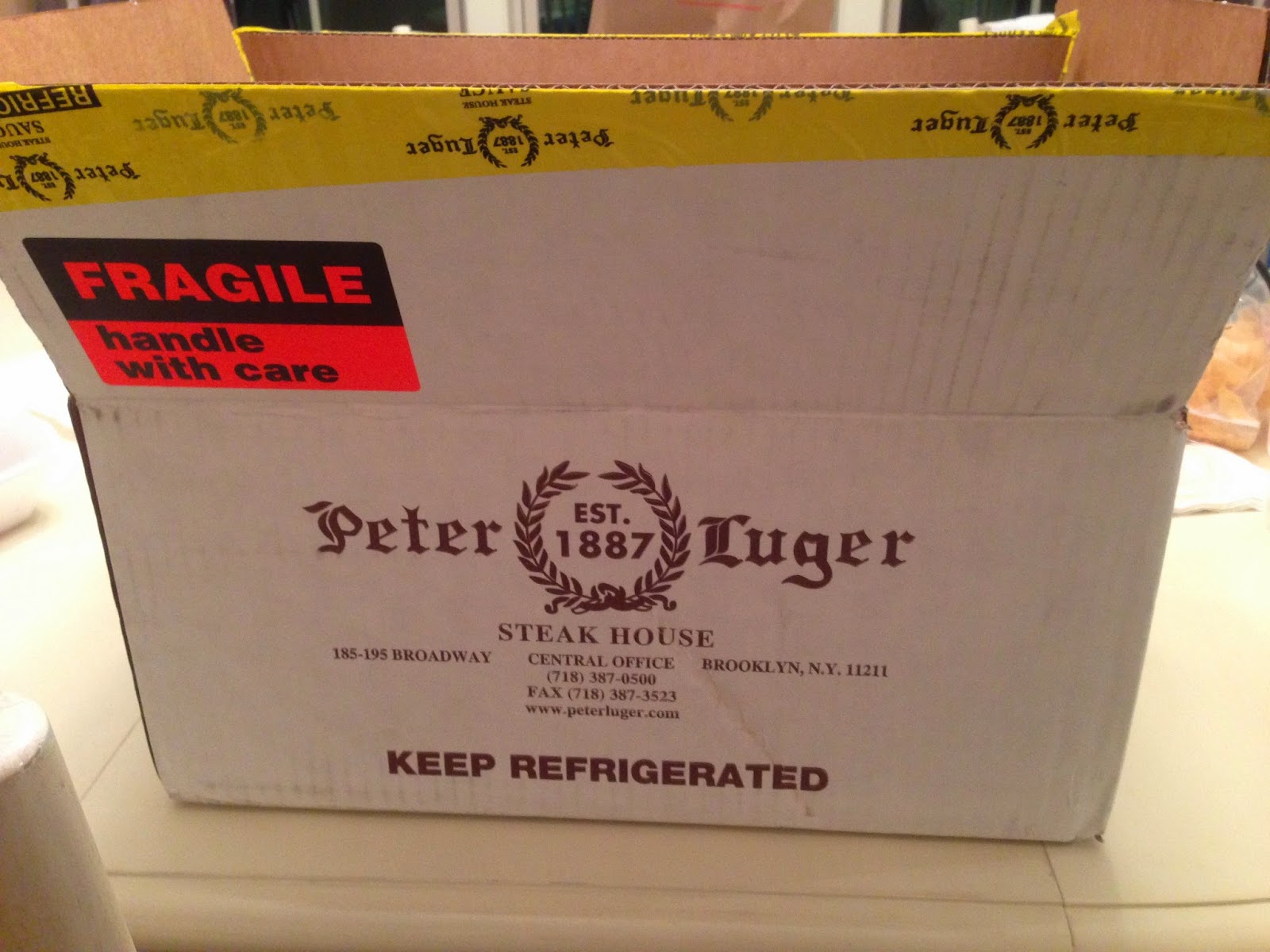 Peter Luger's is a steakhouse in Brooklyn, New York.  Trey & I ate there while we were in New York on our honeymoon in 2009, & obviously their steak sauce left its mark on Trey, much the same way Peter Luger's left its mark on Trey's credit card.  Their steak sauce is good, & now I can drown any steak I eat in it for approximately the next five years.  We'll see how long the credit card remains firmly in my grasp.  Thankfully, lately Trey's been reading a lot at night after the kids are in bed so he misses most of the infomercials; I can only imagine.

In addition to his new set of steak knives & the straight-from-New York steak sauce, the price of which I remain happily in the dark about, I am finally granting Trey a request he's made of me for quite some time.  This Saturday I'll be taking a concealed carry course so that I can legally carry my revolver on my person, except of course while I am at church or while I am teaching . . . but no matter, because everyone knows crazed gunmen respect the sanctity of churches & schools & would never ambush a large gathering of law abiding citizens who are unable to arm & defend themselves.

Since I've briefly mentioned our honeymoon already, I'll just take the whole stroll down memory lane & tell you that Trey gave me my revolver when he proposed.  Take a moment, wipe the tears . . . not only did he give me the revolver when he gave me my ring, the ring box was inside the revolver case.  Are you still there?  Did anyone faint?  What can I say?  Weapons are his love language, & I'll be spending several hours learning how to speak it this Saturday.  I am honestly completely dreading the day, but I do like the idea of not fearing for my life when I am out & about in Monroe, which has become just a tad scary.

I know you're wondering where they are, but no, I have not taken Henry's nine month pictures yet.  He will be nine months old for another two weeks, & I will make the deadline.  He knows that I love him.  This past week has been a blur of antibiotics, cough meds, breathing treatments, & insulin adjustments to accommodate the aforementioned meds.  The shame of it all is that Reagan has been doing saline breathing treatments a few times a day for the past week, & yet, all Darth Vader references are totally lost on her because she doesn't have a clue who he is.  She didn't smile once; she just gave me an odd look & said, "Mama, who's Luke?"

I suppose I'll close with an obligatory "Happy St. Patrick's Day."  I am thankful I'm home all day today, happily snug inside my house with all my weapons rather than out in public, taking a chance that some fool who would otherwise never dream of touching me might think it's appropriate to pinch me because I am not wearing green.  The whole concept of this day is just peculiar to me.  At least next year if I'm pinched on this oddest of days, I can accidentally, "accidentally," flash the offending dolt my concealed weapon.

I typed most of this up last night, but I have a fun Monday morning addendum for you.  There is some retching happening in our home this morning.  Thankfully, at the moment, it's only the adults who have retched, though Trey considerably more than me.  We shall see how the day unfolds.  So now our recovering stomachs will be in a race with the clock to eat the steaks I bought before the date stamped on them.

I hope your Monday is off to a better start than mine, & if you haven't vomited, well, it is.