I'll begin by confessing that I am an epic failure at being a pancreas.  Epic. 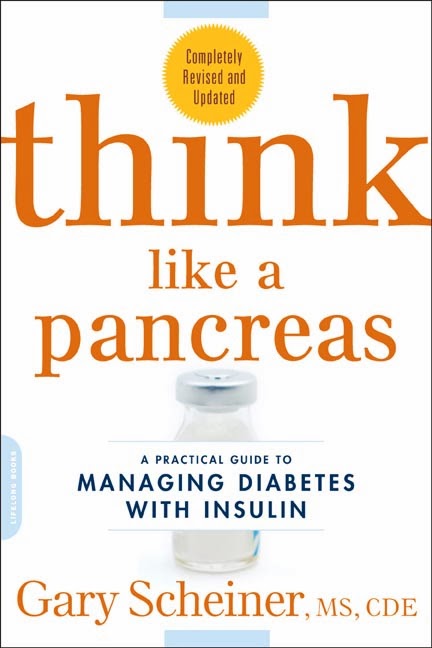 is en route to my mailbox as I type.

If you can't bear another post about my child's diabetes, you'd best check out now.  Aside from Henry hitting the eight month mark, which of course I captured in pictures featured below, diabetes is my whole world right now.  I mean, you didn't think I'd pay any attention to the Olympics, did you?  From what I gather, the big story is that Bob Costas has pink eye.  I'll pass.  If I ever make it to bed with enough energy to stay awake awhile, I plan to watch not curling, but Silver Linings Playbook, which has been calling to me from the DVR for weeks now.

When we left Reagan's doctor's office in Jackson a few weeks ago, I was looking at the papers they handed us when we checked out.  I noticed that under "Reason for visit" it stated "uncontrolled diabetes."  I felt like the paper was calling me out; I don't do well with anything that is uncontrolled.  Her blood sugar readings are currently consuming me.  I am only sitting & typing this right now because Trey came home from work & told me he'd play with the kids in the living room because I needed to, & I quote, "Go chill out."  So, this is me, chilling out.

I know that a lot of children are diagnosed with Type 1 Diabetes at a young age, some even younger at diagnosis than Reagan; there have been many mothers who walked this path before me.  I wonder how those mothers handled it, at least immediately after the diagnosis in this insane period during which we were told to expect some erratic sugar readings until we (& by we I mean ME) figure out how much insulin Reagan needs, & when exactly she needs it.  You should know that I have been on the phone with someone from the doctor's office in Jackson on an almost daily basis asking them to further clarify 'erratic.'  When I'm not on the phone with the doctor's office, I am having this conversation with myself (usually in a corner of the house with a cup of coffee in my shaky hand): Should I check her number?  Maybe I should wait another thirty minutes?  As you can imagine, I am barrels & barrels of fun right now.

In a recent email exchange with a Type 1 Diabetic, I was told that,"Diabetes is a personal disease."  It sure is.  The insulin dosage that works for one thirty five pound three year-old is not likely to be the insulin dosage that works for another thirty five pound three-year-old.  The doctors are helpful & they know their stuff & all, but I've come to realize their guess is about as good as mine (between you & me, despite my having made a D in chemistry in high school, right now I think my guess is better).  It's all trial & error, & it's a bit maddening at times.  Ok, it's maddening all the time.

The odd thing is that diabetes is, in one respect, a simple disease.  If there is too much sugar in the blood, insulin is needed.  If there is too much insulin, sugar is needed.  Frustratingly, there are so many, many variables that affect one's sugar levels, as I'm discovering, & figuring out how to balance it all to arrive at acceptable blood sugar levels is, to date, the toughest thing I've faced.  Everything is compounded by the fact that Reagan is three.  She has an impressive vocabulary for a three-year-old, but she can't adequately explain how she feels healthwise, nor can she recognize & vocalize that she's experiencing symptoms of hypoglycemia (low sugars) or hyperglycemia (high sugars).  If she pitches a fit, I have to check her number before deciding how to respond.  From what I've read online, having high sugars makes you feel pretty miserable, & Reagan is currently running high almost every day.  Her number skyrockets between breakfast & lunch.  Her doctor is gradually increasing her insulin dosage, but we have yet to arrive at an amount that will prevent these high readings.  I am a few high readings away from having what I think would be termed a mental breakdown.  Bob Costas's funky eyes may not be the most interesting thing on the news soon.  Maybe that's why I'm so eager to again watch Silver Linings Playbook, a movie that celebrates crazy, featuring a man recently released from a mental facility who thinks he can woo his estranged wife by reading American novels, & a woman who is angry, bitter, & sarcastic.  Jennifer Lawrence is so fantastically angry, bitter, & sarcastic that she won an Oscar for her role in the film.  The movie is calling my name.

I've thought a lot about creation lately, specifically when God knitted Adam, & then Eve, together & they rose & walked around, thinking & breathing & creating the perfect amount insulin.  The human body is amazing, & it's unfathomable to me that someone with any knowledge of the intricacies of the human body could deny the existence of a powerful & mighty Creator.  He is in control, not me, & this is as true today as it was the day He created Adam & Eve, the day Reagan was born, & the day before Reagan was diagnosed.

What I am currently doing (though not well), attempting to keep Reagan supplied with the right amount of insulin, is what happens in my body, & in everyone's body, constantly & perfectly, save those who are, like Reagan, diabetic.  It is likely that Reagan will be on an insulin pump in the future, which I am told offers considerably more control over blood sugars & likely will be better at being a faux pancreas than I am.  I am always in favor of anything that offers more control (unless of course it involves the federal government).  For now, my goal is to check Reagan's number mid-afternoon & be greeted by a three digit number that begins with a 1.  We are all totally cool with the shots, the finger pricking, etc.  I can handle all that, as can Reagan.  If we could just arrive at a ballpark figure of how much insulin to inject, well, then I would chill out.

As promised, here are the results of Henry's eight month photo shoot.  He hit the eight month mark on February 6.

Playing with the number 8: 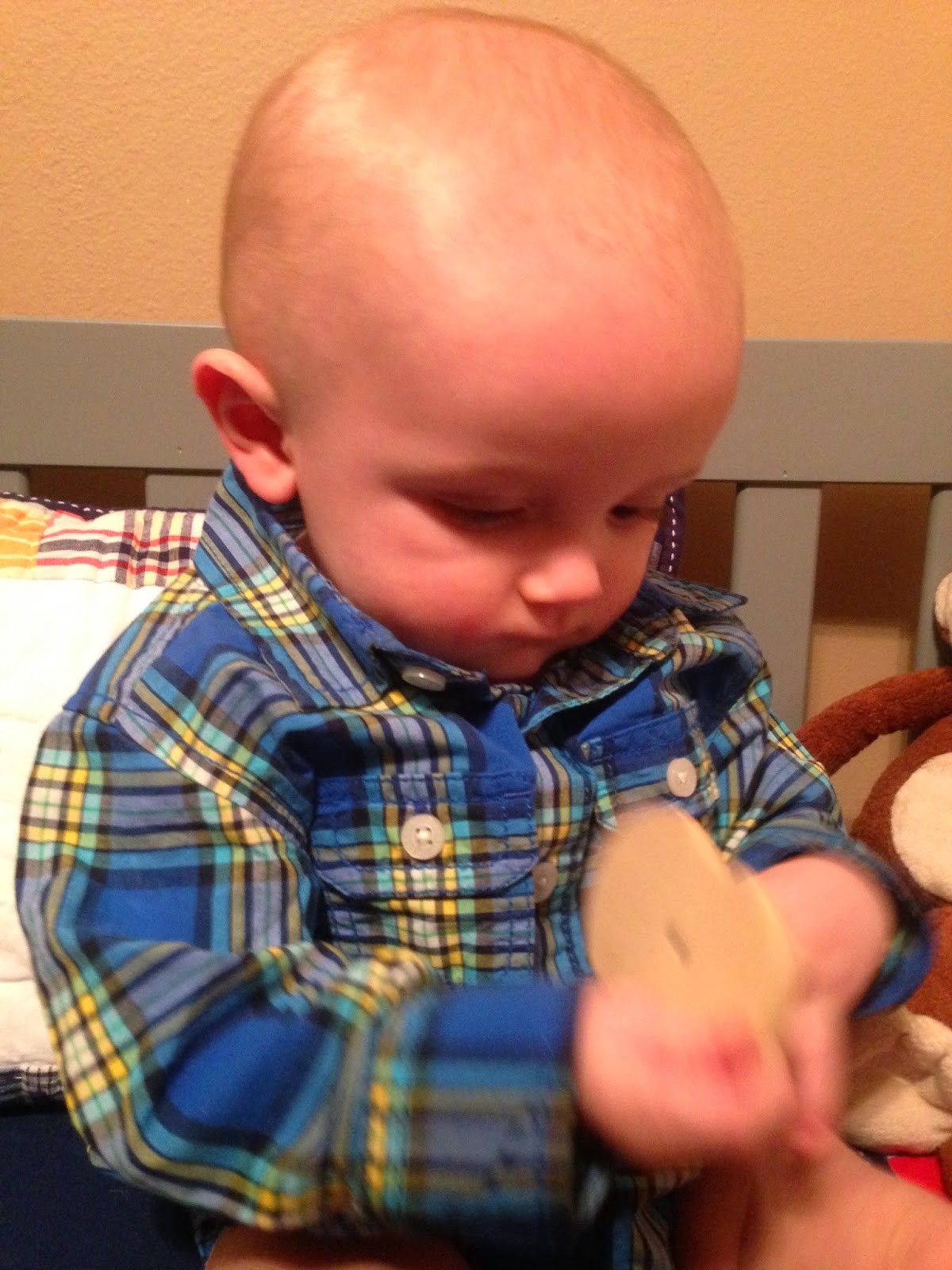 Sporting his argyle socks I bought him before he was born: 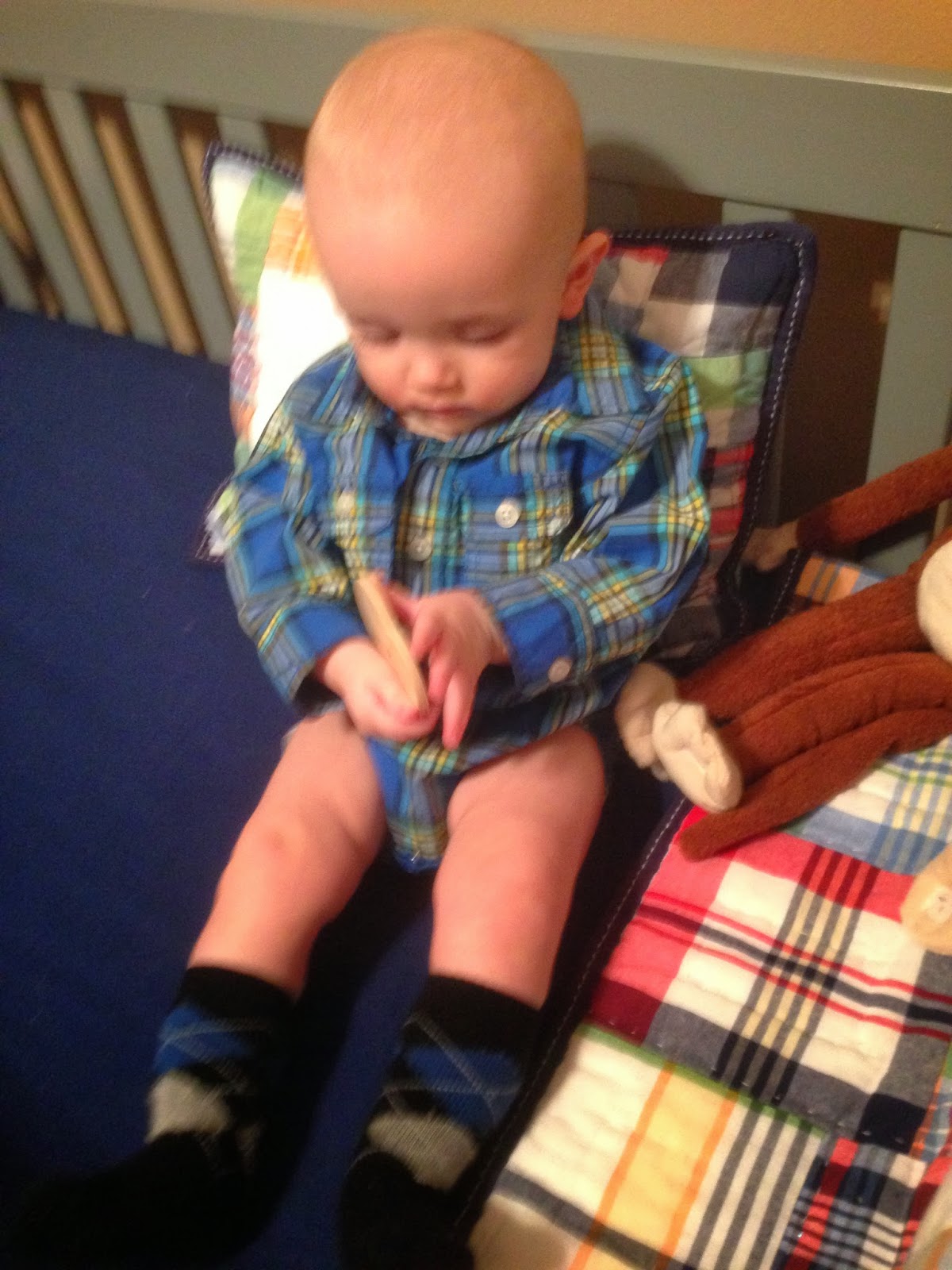 He finally noticed me: 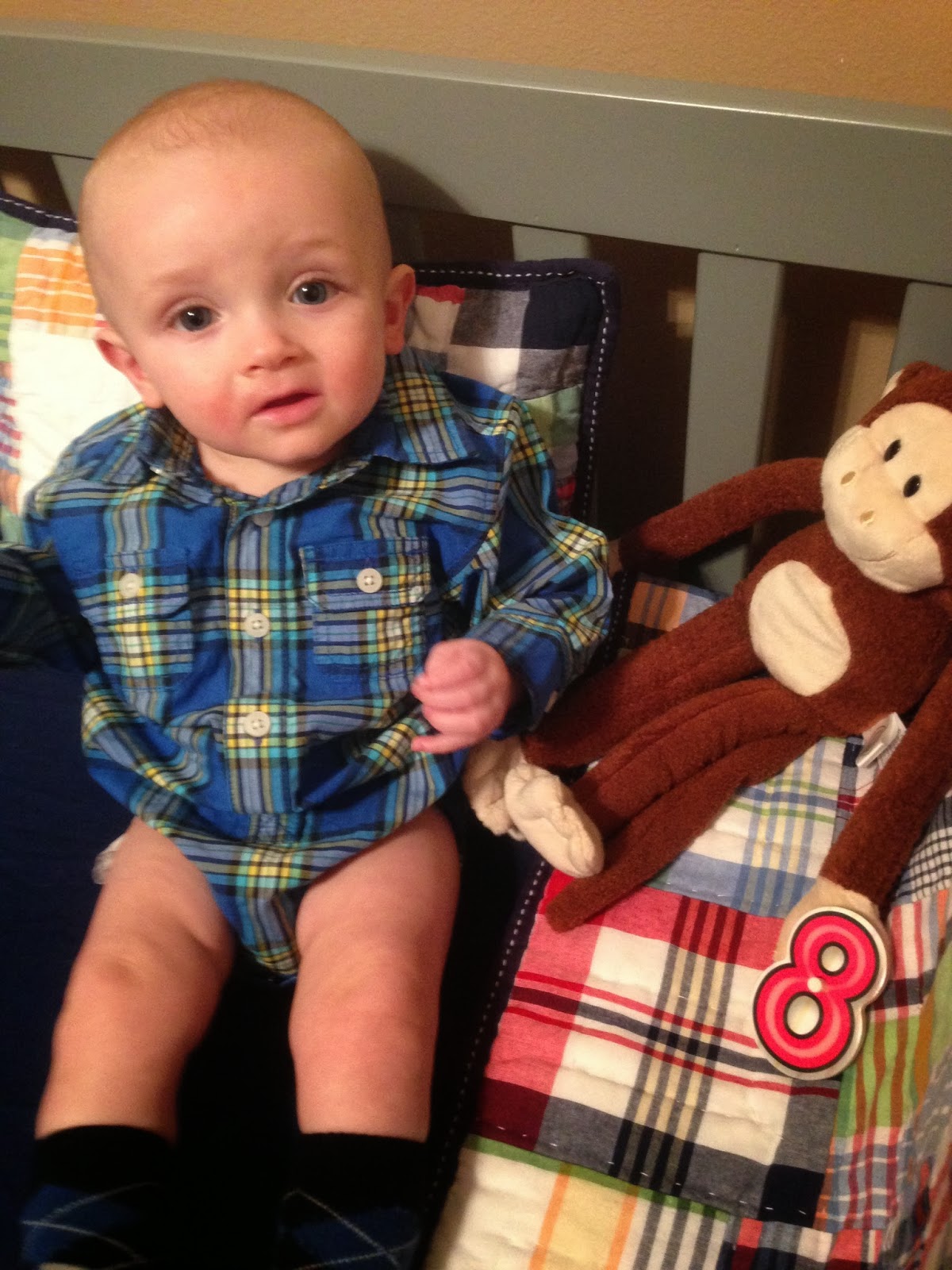 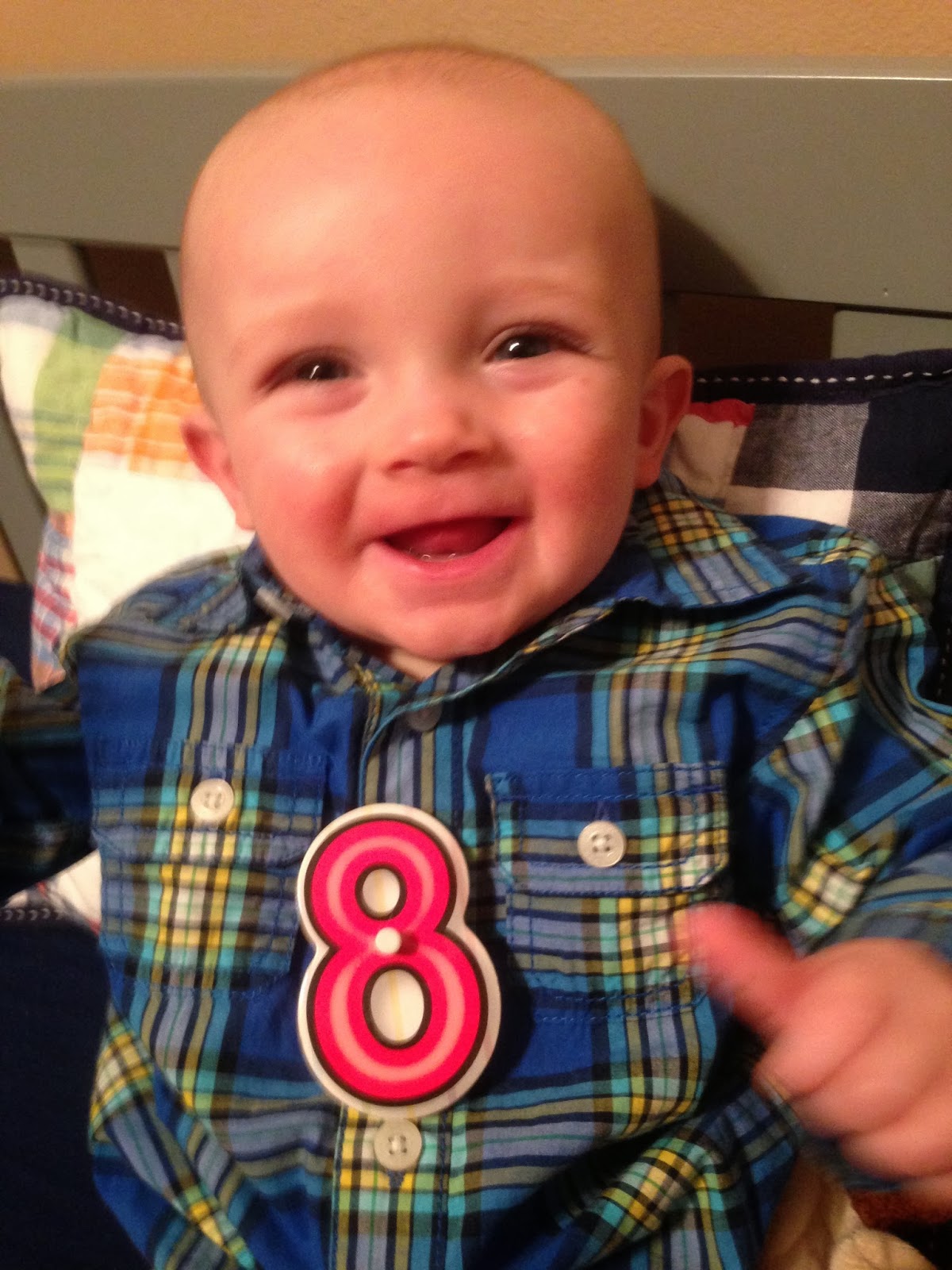 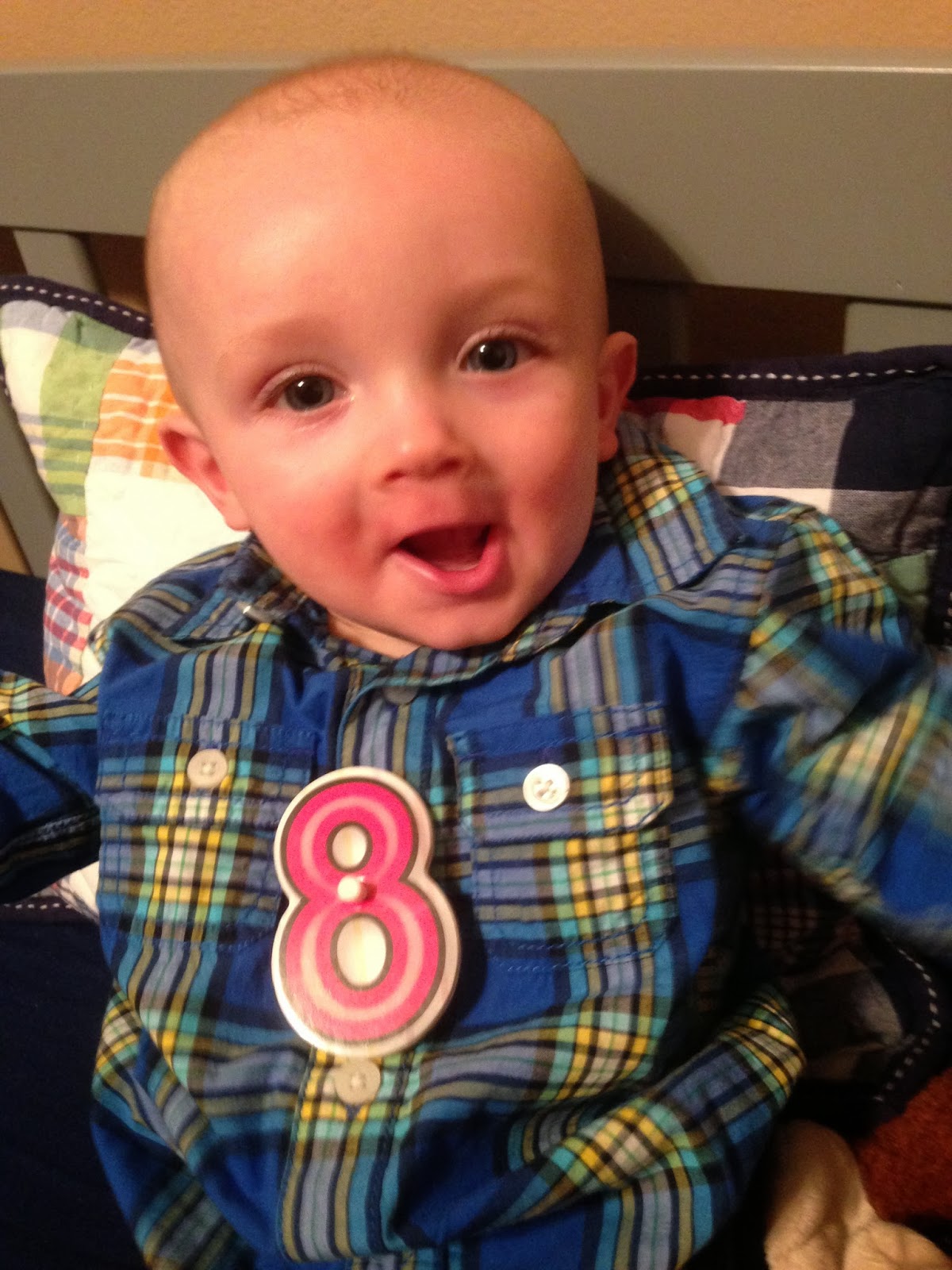 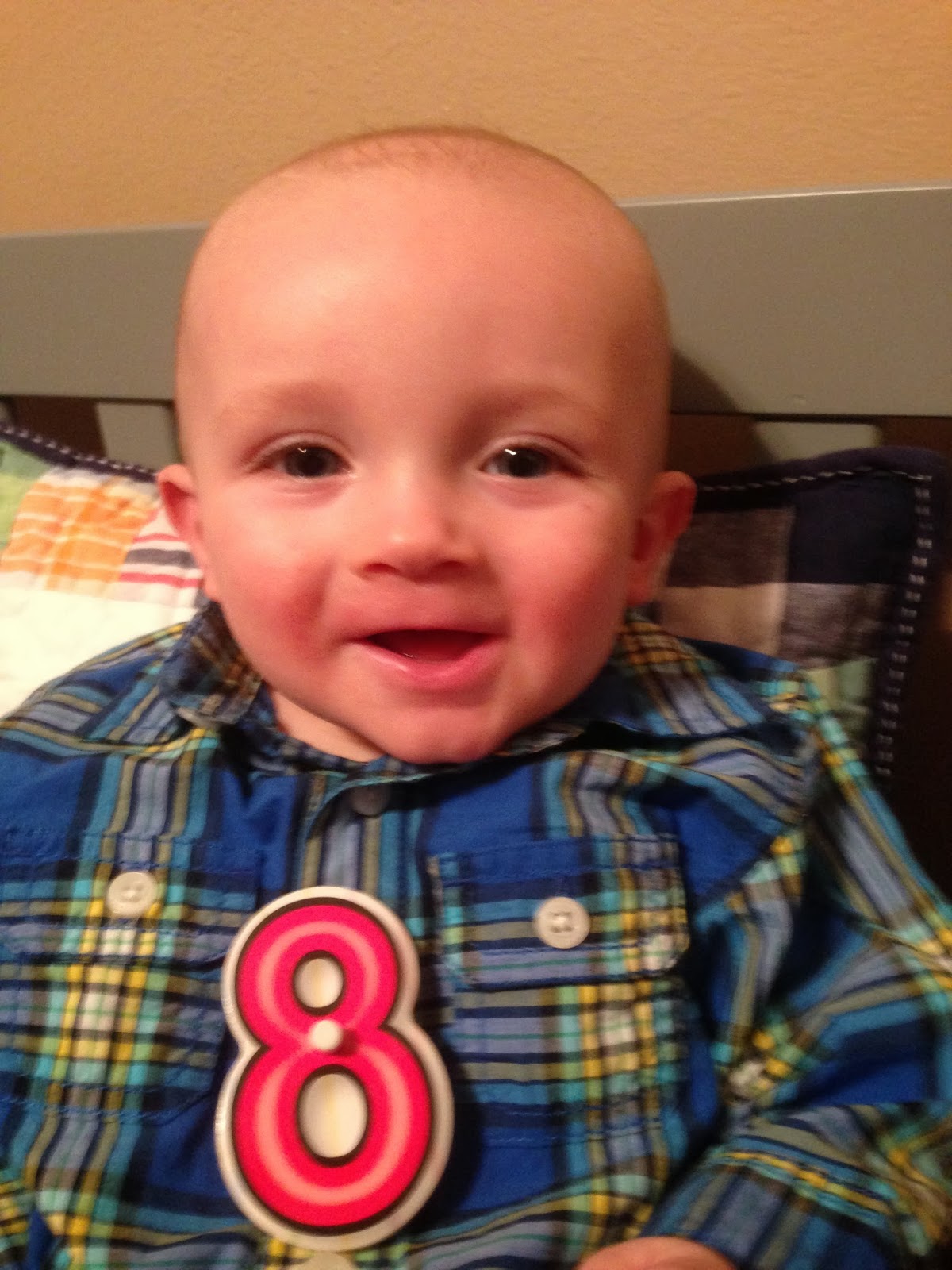 And then he noticed my phone.  The end. 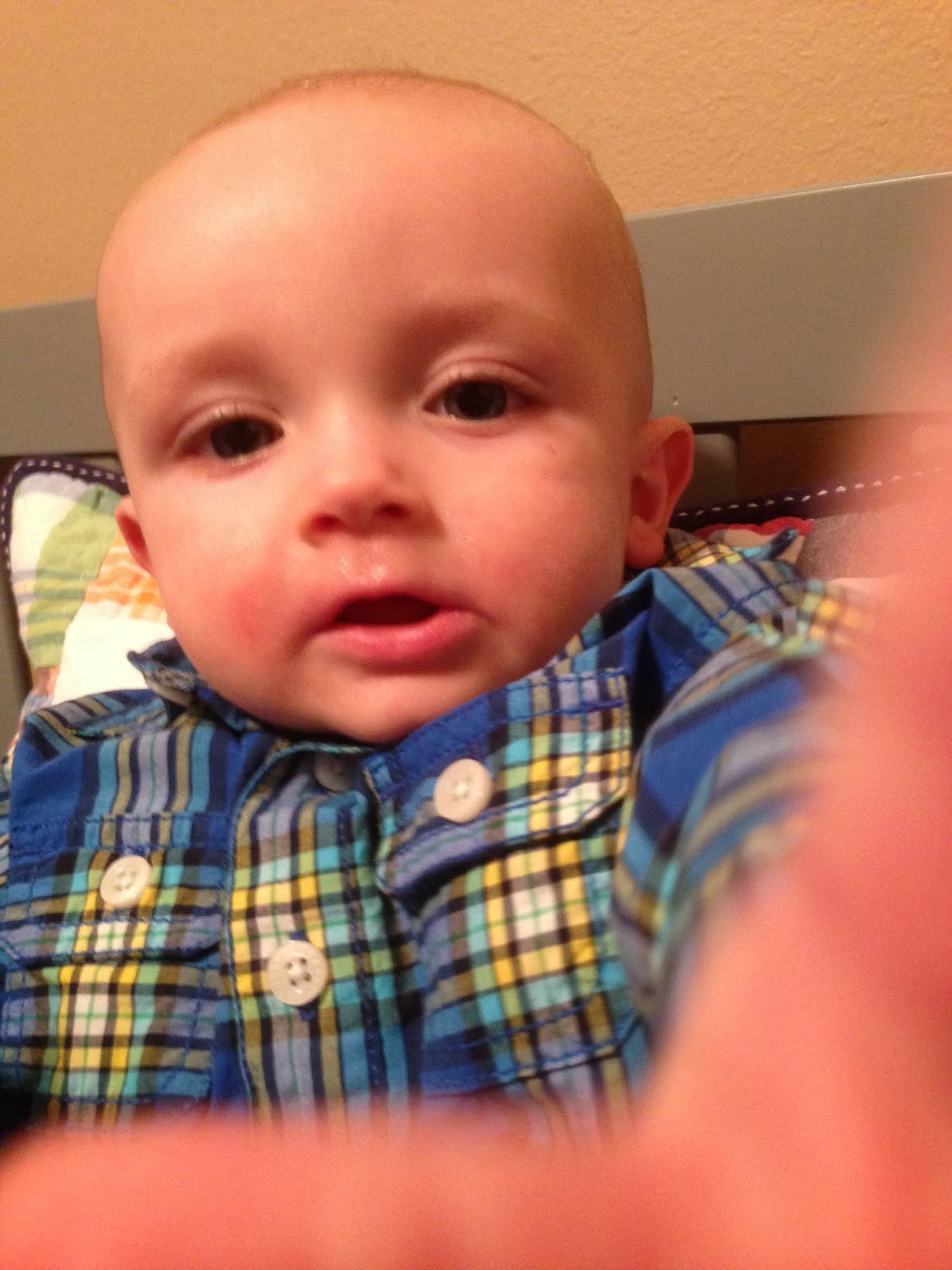 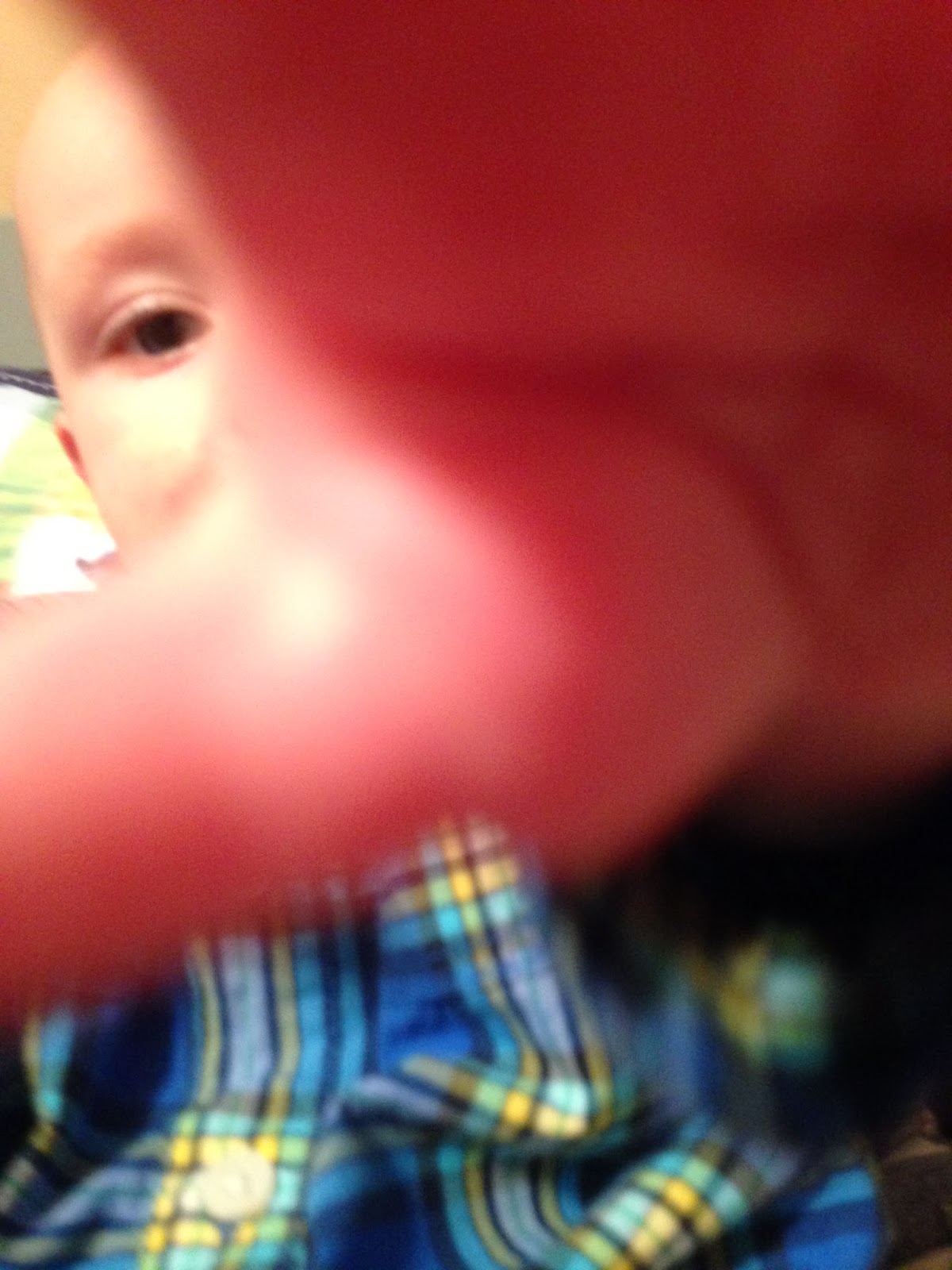 Thank you for the kind words & messages from those of you reading the book.  I am enjoying rereading it & making changes here & there.  You've no idea how much I agonize over a word or phrase or sweater vest in certain places, but if I ever needed a fictional escape, it is now.  Lord willing, I'll post chapters seven & eight Friday.  A little Valentine bonus for you.  I may not be able to reign in Reagan's blood sugar numbers at the moment, but I am all-powerful when it comes to the Boulder residents who live in my mind.  I'm not going to actually say that aloud as Trey might begin to think I need more than just a few minutes alone with my MacBook.