I'm warning you, you may want to slice yourself some cheese before reading any further, because this post is heavy on the whine.

I think it's unfortunate that most people assume labor refers to the hours during which a pregnant woman, having carried her child to term, attempts to coax her baby out of her body.  Let me tell you, I am laboring now.  I enjoy good health; I've never broken a bone or had a kidney stone (both experiences I've been told are more painful than childbirth), so I don't have much to look to for comparison, but I can say with certainty that this past week has been one of the most physically challenging weeks of my life.

I went to the doctor Wednesday preparing myself for the news that I was carrying not one, but two babies.  My symptoms arrived so much earlier, & with considerably more force, than when I was pregnant with Reagan that I was seriously contemplating how to tell Trey that despite our plans, we would have three children.

Unless someone is hiding, there is only one.  This is what I saw Wednesday: 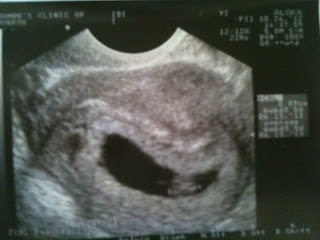 I am queasy all day long.  Morning sickness is a misnomer; it's simply sickness.  I fear hunger, because hunger exacerbates the queasiness, yet, there is almost nothing I want to eat.  I've eaten so many saltine crackers already even they make my stomach turn.  When I do get a craving for something, I tend to go a little crazy, but I'm quickly learning to reign myself in as being overly full is another sure way to bring on the nausea.

My home is full of gag-inducing land mines I cannot avoid:  the kitchen, the pantry, the dishwasher, dirty diapers.  My dad suffers from severe allergies when he mows the yard, & thus wears a mask when he mows (yes, he looks as cool as you think he does).  I've requested one of these masks to aide me when Trey isn't here to change a dirty diaper, or I have to take out the trash.  I want the trash taken out constantly, because I can smell it all over the house, but of course, picking up the bag & tying it tightly is no easy task.  Oh, the smells.  To his credit, Trey changed several dirty diapers this weekend & even went grocery shopping with Reagan, a feat that makes me tired just thinking about it.

I don't know who I am; I don't want coffee, chocolate, or even water, all things I usually down daily, typically in large quantities.  I've resorted to eating ice in an attempt to keep myself hydrated.  I don't want to watch anything but nonsense on television, shunning all political programming.  Friday I watched numerous episodes of Say Yes to the Dress, crying each time one of the fickle brides made her selection.  Not sniffling, crying, as in tears actually streaming.  Intellectually, I knew this was foolish as many times I didn't even like the dress the prospective bride picked, but there I sat, weeping over an ugly dress a stranger selected & sipping my Sprite.  Saturday afternoon, I found myself flipping to a rerun of Friends while Arkansas & Ole Miss battled to the end in a close game.  What?

Friday was a day I would have loved normally.  It's finally chilly outside, there was a cloud cover that hung around all day, & Reagan & I stayed in our pajamas.  Granted, were I not nauseated, we'd likely have lounged in PJs anyway, but I'd have cleaned the house, done all the laundry, lit a fall scented candle, made us lunch, & then some hot chocolate for us to enjoy while we watched TV.  Instead, I pulled myself off the couch a few times to change her diaper & make sure neither of us starved.  Reagan seemed to think it was fun, dragging everything she owns - toys, clothes, shoes, books - into the living room, walking over to the couch to show me what she'd retrieved & then laughing & clapping.

I hate to whine, but I guess I've given myself license to just wallow in it all for a few minutes, & share it with you, my fortunate readers.  The worst is that there is no respite.  It's like having a stomach virus for weeks, except you're not contagious & can't call in sick to work, telling them you'll be back in a day or two when it passes.  It is, in many ways, worse than labor (at least labor as I've experienced it).  There's no epidural for this.  I'm learning as I go.  There are things my body simply won't accept, & the list is different than the one I generated while pregnant with Reagan, so I'm learning the hard way.  I've learned not to drink much of anything while I eat, not to go two hours without eating something, to sit up straight & eat slowly, & not lie down for awhile after I eat.  I know, I know; it sounds like they ought to be preparing me a bed in the nursing home.

I hope to return to this post in a month, maybe even a few weeks if I'm lucky, & be thrilled to be past this phase of pregnancy.  Something I must note, because I know it is funny & I'll appreciate it more later, is that Reagan finds my gagging hilarious.  She laughs, & then mimics the sound herself.  So, there's that.

I feel useless, & I hate it.  Well, sometimes I hate it, & sometimes I don't care at all, I just want to sleep.  I keep reminding myself that my body is busy, even while I sleep, doing important work.  Nearly every day, I go to websites like this one where they detail the happenings of pregnancy week by week.  I'm in the middle of week 7, so this week hands & feet begin to emerge from the growing arms & legs.  The baby has doubled in size from last week, & is currently about the size of a blueberry.  Let me tell you, doubling in size to reach blueberry status is exhausting work.  I have about 10% more blood in my body than I did before becoming pregnant, & this will gradually increase until I am pumping 40-45% more blood to meet the demands of a full-term baby.  So don't be fooled: I may appear to be a listless, emotional mess, but I am busy.