The real estate roller coaster continues.  I think it's starting to stress Reagan out: 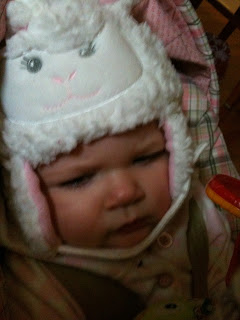 After doing some thinking & some number crunching, Trey & I have taken matters into our own hands & decided to proceed with the purchase of our home.  It's probably the one house in this area that Trey & I agree on, & I also think he fears if we built I might bankrupt him.

I won't even mention what this means for me & my love/hate relationship with my new BFFs, the boxes.  I am excited that after all the turmoil & many weeks of sitting forlornly in the middle of my living room floor, the chances of my fake 9 foot Christmas tree seeing the light of day this year have improved dramatically.

More on this turn of events later, as I'm currently heavily involved in preparations for a birthday party.

I am making meatballs: 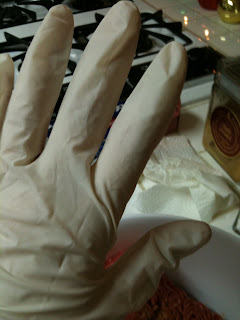 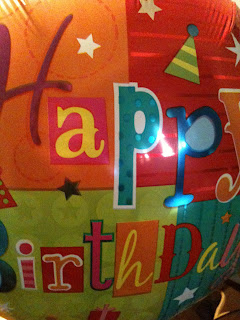 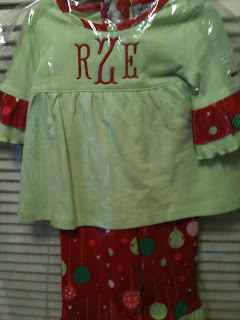 Yes, the outfit is draped in plastic so that it's in pristine condition when Reagan digs into her cake.

As if the week hasn't been enough of an emotional tailspin, tonight while driving to my parents to drop off deli turkey, chips, & flowers for Reagan's party, I listened to Ouachita Christian School's football team win a state championship.  I'm 31, a mom, & have spent the whole week discussing mortgages, but I had a few tears in my eyes listening to the end of the game as I was taken back to another state championship game O.C.S. won against Oak Grove (grrrrrrr) in December of 1997.

I saw this posted on Facebook earlier this week: 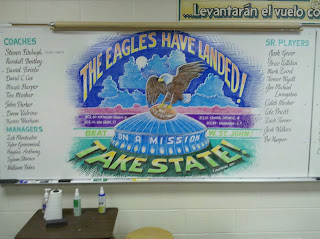 Mr. Tammy Matthews, whose wife has taught Spanish at O.C.S. for years, drew the above on the dry erase board in her room.  He's a talented man, & he's been lending his gift to O.C.S. for many years.  Back in 1997, no one had dry erase boards, so he had to use chalk: 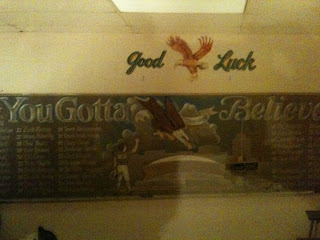 No one had digital cameras then either, so forgive the quality of these.

Below, a few senior girls serving the football players sausage biscuits one morning: 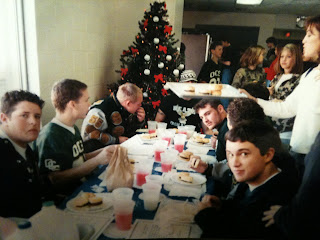 During the regular season that year, O.C.S. beat Oak Grove 34-33.  This sign was used at the pep rally before the team left for the Superdome, where they defeated Oak Grove 53-35: 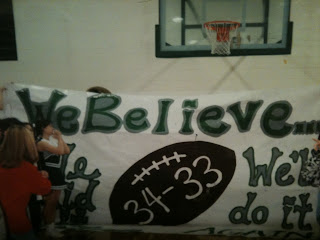 Good friends inside the Superdome . . . we all look pretty good, considering there was no such thing as a flat iron in 1997 & for whatever reason, I am apparently wearing no eye make-up: 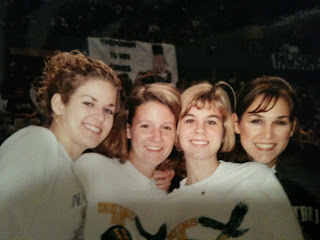 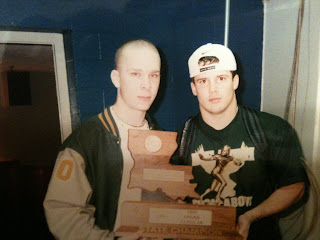 Below, a much younger me with Jonathan Lane, one of my best friends in high school.  Our lockers were always close, him being an 'L' & me being a 'J.'  After high school, he joined the Air Force & served overseas in Iraq & Korea.  In April of 2005, after he'd returned to the states, he died suddenly from a blood clot that travelled to his brain.  He left a wife and young son, Tyler.  His funeral was in Goldsboro, North Carolina, where he'd been stationed, but the Air Force flew him home to Marion where a visitation was held before he was buried near his childhood home.  At the visitation, his mother told me how much he enjoyed his senior year of high school & that he'd once said he would love to relive that year again.  I revisited that year for a little while tonight; it was a great year. 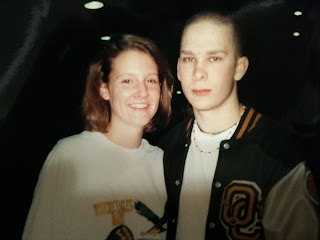 I was recently asked by a friend at church if we planned to send Reagan to O.C.S.  The answer was an unequivocal 'yes.'  In the fall of 1985, I entered O.C.S. at age 4, & in the spring of 1998, I left at age 17.  I know I am a better person for the time I spent there.  There are many things I love about O.C.S. & I have many, many memories from my years there.  When I think about the group of 50 that I graduated with, what stands out is that because of O.C.S., I met & grew up with wonderful people from Marion, Delhi, Oak Ridge, Bastrop, & even Arkansas who were all fortunate enough to have someone in their life who thought they needed to be at O.C.S.  If I were to make a list of decisions my parents made that shaped who I am, their decision to send me to O.C.S. would definitely be in the top 5.

I haven't actually made a list, so don't stay awake wondering what the other 4 are.