I must pause to post this picture I took of Reagan last Friday night in her new jeans & hot pink hoodie (Reagan's pants rolled over into the double digits about a month ago): 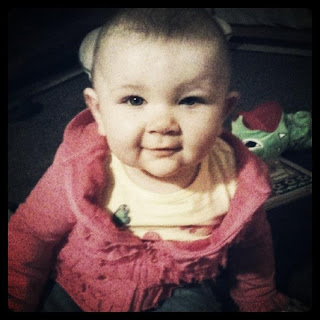 Last year I turned 30.  The otherwise milestone birthday was eclipsed by my being 7 months pregnant.  By 7 months, I was eclipsing pretty much everything.  I'd always had a few vague ideas of what I wanted my life to look like at 30, & there were no real disappointments (aside from my weight, which I wasn't happy about, but quickly dismissed & continued eating for two).

I enjoy spending time alone.  I like to shop alone, and as I've gotten older, I've developed a fondness for eating alone in restaurants.  Knowing that soon I would not often have that luxury, I did this frequently while I was pregnant.  Sometimes it was just soup (in a bread bowl) at McAlister's (I always wanted soup & carbs while I was pregnant, & I ate many bread bowls).  Several afternoons after I finished teaching at Delta, I ate a late lunch of soup & salad at the Olive Garden.  The hostess would always ask, "Table for one?" and I'd smile and say yes.  Occasionally a hostess would eye my belly and add, "Oh, table for two," and depending on how hungry I was, I might smile again.

My 30th birthday fell on a Friday, a day I didn't teach, so I dressed and made tentative plans to meet my mom for lunch at Copelands.  She was in Bastrop visiting her aging father, and ended up unable to meet me as early as we'd planned.  I was hungry and, having already mentally selected what I wanted for lunch, I headed to Copelands and ate lunch alone on my 30th birthday.  It was wonderful.  I sat for probably an hour while two different waiters took my order, refilled my water glass after practically every sip, and inquired about my pregnancy.  I read the Drudge Report & checked email on my phone.  This is what our culture considers 'alone.'  I had a 5 pound person in my belly, two waiters bustling around ensuring my happiness, & the world wide web at my fingertips.

I am never a party of one these days; Reagan travels with an entourage most of the time, and at home she is on my heels, now able to move with ease and determination.  I have a moment, or two (or ten) almost every day when I desperately want to be alone: alone with my coffee, alone with my MacBook, alone with Edward a book.  I am blessed to have a healthy toddler who adores my company.  I know soon enough sharing my company will fall to the bottom of her priority list, & I remind myself of this constantly when my hands are full - full of her, full of poop, full of dirty clothes.

In 1992, the band U2 released a song titled "One."  It went on to become one of their biggest hits, & the lyrics have been applied to everything from interpersonal relationships to human rights issues.  A few lines of the song say:

Reagan & I were one for awhile.  One, but not the same: two heartbeats, and most definitely two sleeping schedules.  Jesus was, and is, one with the Father, but not the same.  Through Christ's blood, we are one with our brothers and sisters in Christ, but we're not the same.  Marriage unites two as one, but they're certainly not the same.  It's the people we're one with, either by marriage or parentage or through Christ's blood, that demand our time, & deserve our time, & sometimes need us to carry them (both literally & figuratively).  It's hard at times because oneness doesn't equal sameness, & my interests are often not Reagan's (or Trey's :) ).  All Christians know, intellectually, that we're to die to our selfish desires and live for Christ.  This is a useful blueprint for marriage, and it is something I don't think I truly grasped until I had a child.  Being a Christian and a wife and a mother demand different things of me, but I have realized that I can't be any of these, at least not with any degree of success, without embracing, and being thankful for, my role as a carrier, even when it infringes on my desire for a table for one.