Yesterday was kind of a big deal.

It started out pretty ho-hum.  At lunch, Reagan was chilly so my mom constructed a cape / shawl for her out of 2 napkins that surprisingly remained in tact until we were ready to leave.  That's pretty much it for lunchtime excitement. 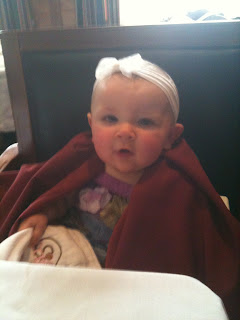 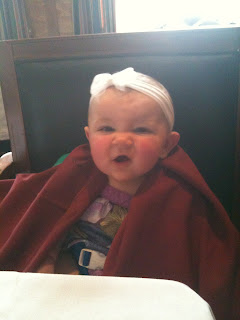 Last night, Trey, Reagan, my parents, & I ate dinner at Applebee's with Tommy & Kay Kay Lindsey . . . and Charles Barkley.  That's right, Charles Barkley got to meet Reagan.  Apparently he was in Ruston over the weekend for a funeral & flew out of Monroe this AM.  In the first 2 pictures, Reagan looks like a little white angel because the flash on Trey's camera was on . . . 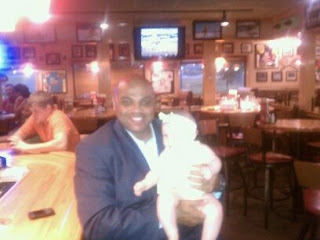 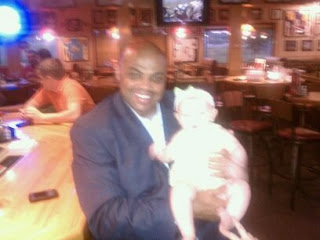 The lighting is better in this one, but Reagan was tired of posing: 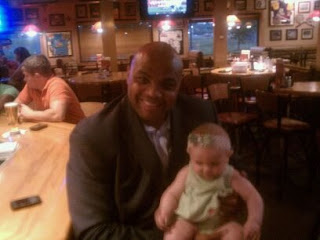 Mr. Barkley was very gracious while Trey tinkered with his camera.  While former NBA stars don't top my list of people I'd like to meet, hopefully this is a harbinger of things to come.  Perhaps soon I'll be posting pics of Reagan with Rick Perry or Ann Coulter or Rush (not the band, though that would tickle Trey).

After the excitement of dinner had passed, I put Reagan in her first pair of '12 month' pajamas.  Sniff sniff. 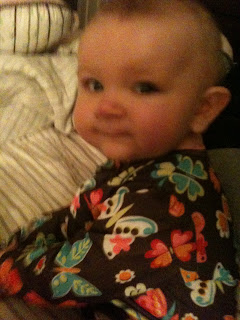 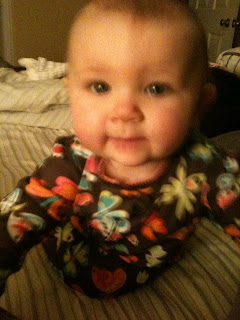 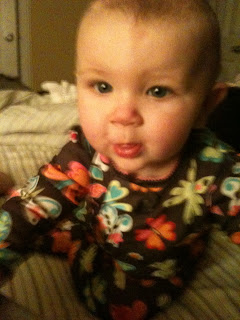 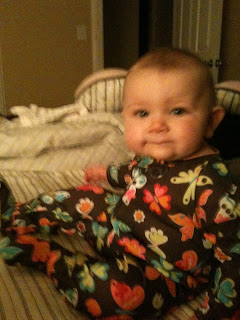 I bought them at the Carter's outlet in Foley because they remind me of a pair of newborn pajamas she wore that I just loved on her.  I thought they might be a little long for her, but they're not.  After I zipped them up, I felt a strange texture on the bottom of the sewn on feet . . . & realized it was grippers because, of course, many children can walk at 12 months.  Her first celebrity sighting & 12 month PJs made for a memorable Sunday.  I think I prefer both me & my baby to wear sizes in the single digits.