Did you miss me yesterday?  Without consciously planning to do so I realize I've developed a habit of posting on Monday lately.  This past semester I taught on Tuesdays & Thursdays, & I guess after having Friday, Saturday, & Sunday to regroup & wear pajamas all the time, I felt like writing.

I am not quite finished grading & averaging & deciding if 89.4 is an A or a B (who am I kidding, it's a B!), but the teaching portion of this semester is now behind me, so get ready to watch me throw caution to the wind & post at random whenever the mood strikes.  Yesterday I was away from my MacBook, & so despite having all manner of excitement to relay, I had no proper outlet (Is it just me?  Does anyone else crave a word processor at times?).  Momentarily I'll tell you where I was yesterday, but first I'd like to back up to Saturday.

When I woke Saturday morning, I had no plans for the day (which is a summation of almost every Saturday for me).  Coffee.  That was the plan; everything beyond that was hazy.  I have developed a habit of lounging in the bed on Saturday mornings (since Trey is hanging around the house, rather than leaving for work) while Trey does the morning insulin routine.  I am available for consultation, of course, & it works out well because the door to our bedroom isn't far from the kitchen so he can tell me Reagan's waking number & I can give him her needed basal insulin dosage for that day without either of us having to yell.  It's like I'm one of those radiologists living in India, sitting around the house all day reading X-rays on the computer & phoning in a diagnosis.  She's over 100?  Okay, give her six units of Lantus, & go ahead & hit the power button on that Keurig.  But I digress (if I ever write an autobiography, that'll be the title: But I Digress).


So anyway, it's around 9-ish Saturday morning & I'm still in the bed, doling out medical advice, & thinking about the coffee.  I did get up, & the coffee was good.  Once I had the coffee in me, I decided my goal for the day was to make it to Books-A-Million & (hopefully) purchase two of the books on the book club's summer reading list.

An hour or so after the coffee, I called my mom because on Friday she'd mentioned something about taking the kids to the RiverMarket in downtown Monroe.  This is how the ball got rolling, & things snowballed from there & if you keep reading I'll tell you how I ended up standing in the Build-A-Bear store in the mall nearly in tears.

I showered & dressed, the whole bit - - make-up, dried & flat ironed my hair, put on pants that don't involve elastic.  By noon I'd accomplished far more than I'd imagined possible while lying in bed contemplating coffee earlier that morning.  I accompanied my parents & the kids to the RiverMarket, & we strolled around (literally, we took the double stroller), & it was kind of hot, so we left, curtailing Reagan's whining with the promise of the merry-go-round at the mall.  Reagan & I rode the merry-go-round twice (VOMIT, VOMIT), while my dad manned Henry & my mom waited for Auntie Anne's to brew fresh coffee.  I know, I know, it's the middle of the afternoon on a busy Saturday, & they had no fresh coffee brewed, but, whatever.  We can't all be multitasking Indian radiologists.

This is a candid shot I took on our first spin on the carousel-o-nausea: 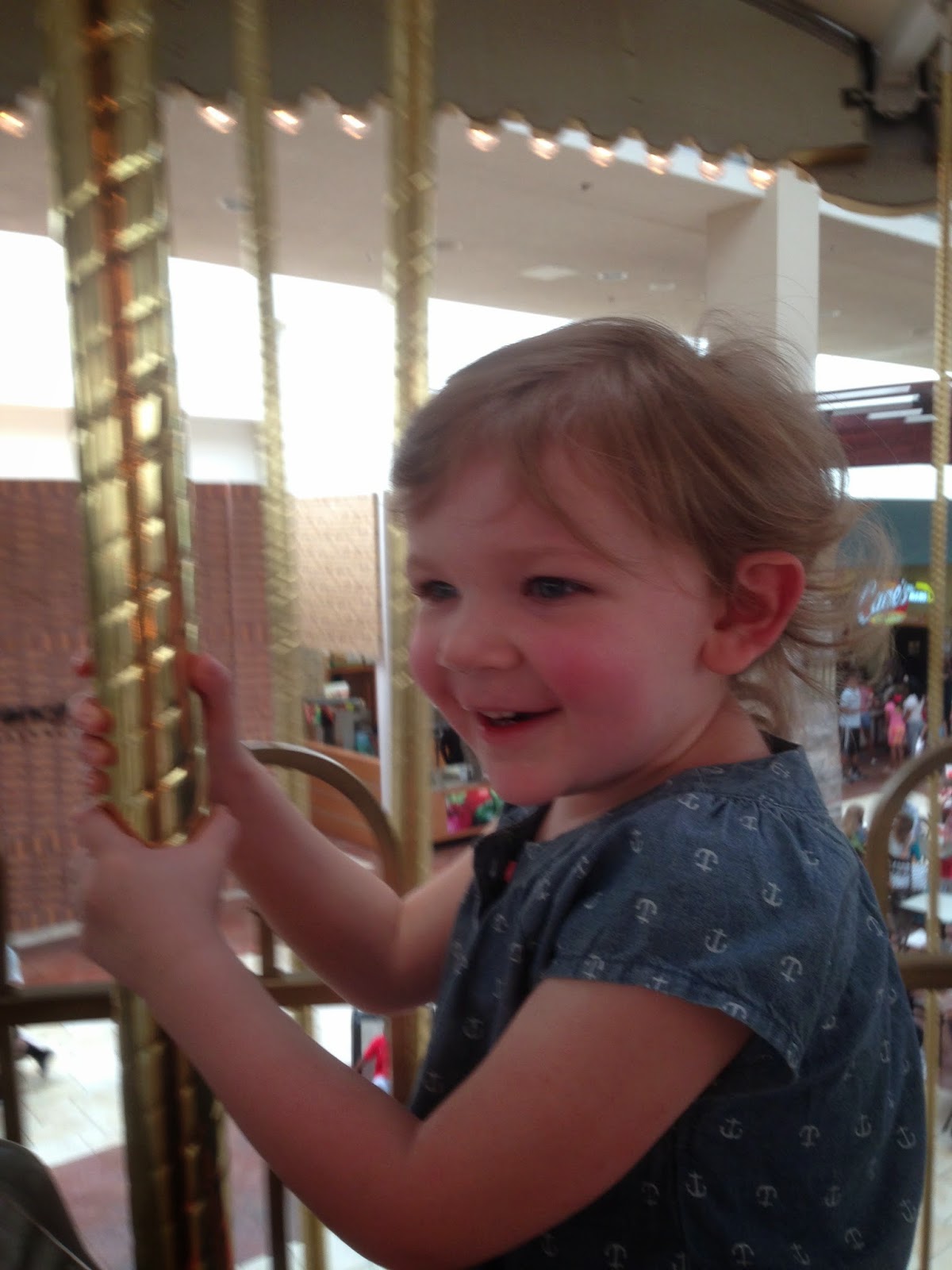 And this is what I got when I asked her to smile: 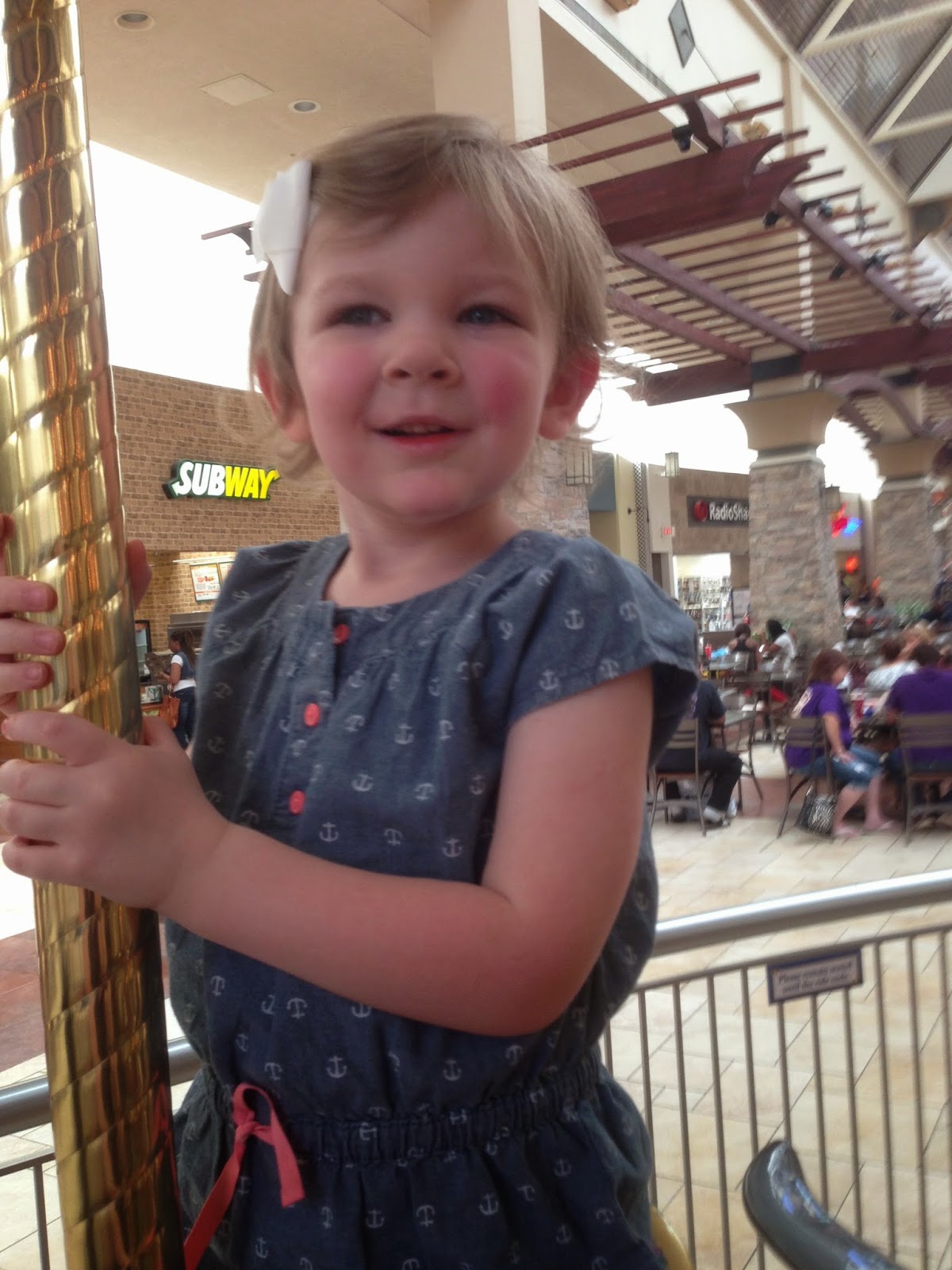 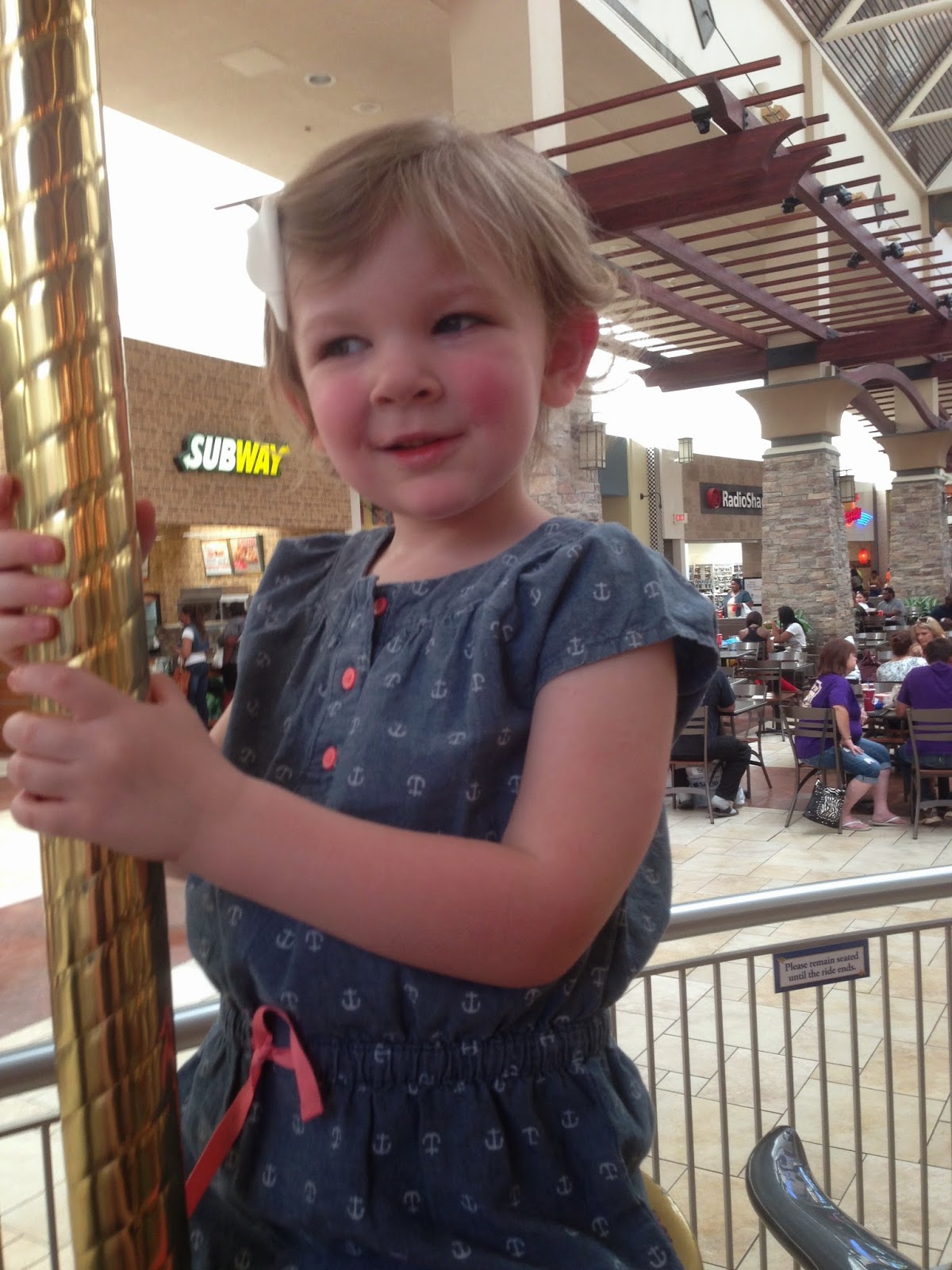 So, after two whirls on the merry-go-round & with two hot cups of coffee secured, we were all about to trek to Dillard's (where Reagan expressed interest in riding the escalator when we arrived), when my mom suggested we first head to the Build-A-Bear store to see if Nikki was working.

Now you're likely wondering who Nikki is (if you're not, skip this paragraph).  If you read my initial post re:Reagan's diabetes diagnosis, you might recall that when Reagan was hospitalized in January, my Aunt Kathy, a Texan, called the local Build-A-Bear store &, working in tandem with an employee named Nikki, crafted a Hello Kitty for Reagan.  Nikki then broke the news to Kathy that Build-A-Bear doesn't deliver, which was problematic since Kathy lives in Dallas.  After further negotiations (Kathy is a skilled negotiator . . . seriously, she's a car salesman's worst nightmare; we should send her to the Middle East), it was decided that Nikki would take the Hello Kitty to St. Francis herself when she left work that day.  Reagan certainly didn't need another Hello Kitty (although this one is definitely the awesomest one in her collection), but I welcomed anything that put a smile on her face during that initial PICU visit.  A few flashbacks for you: 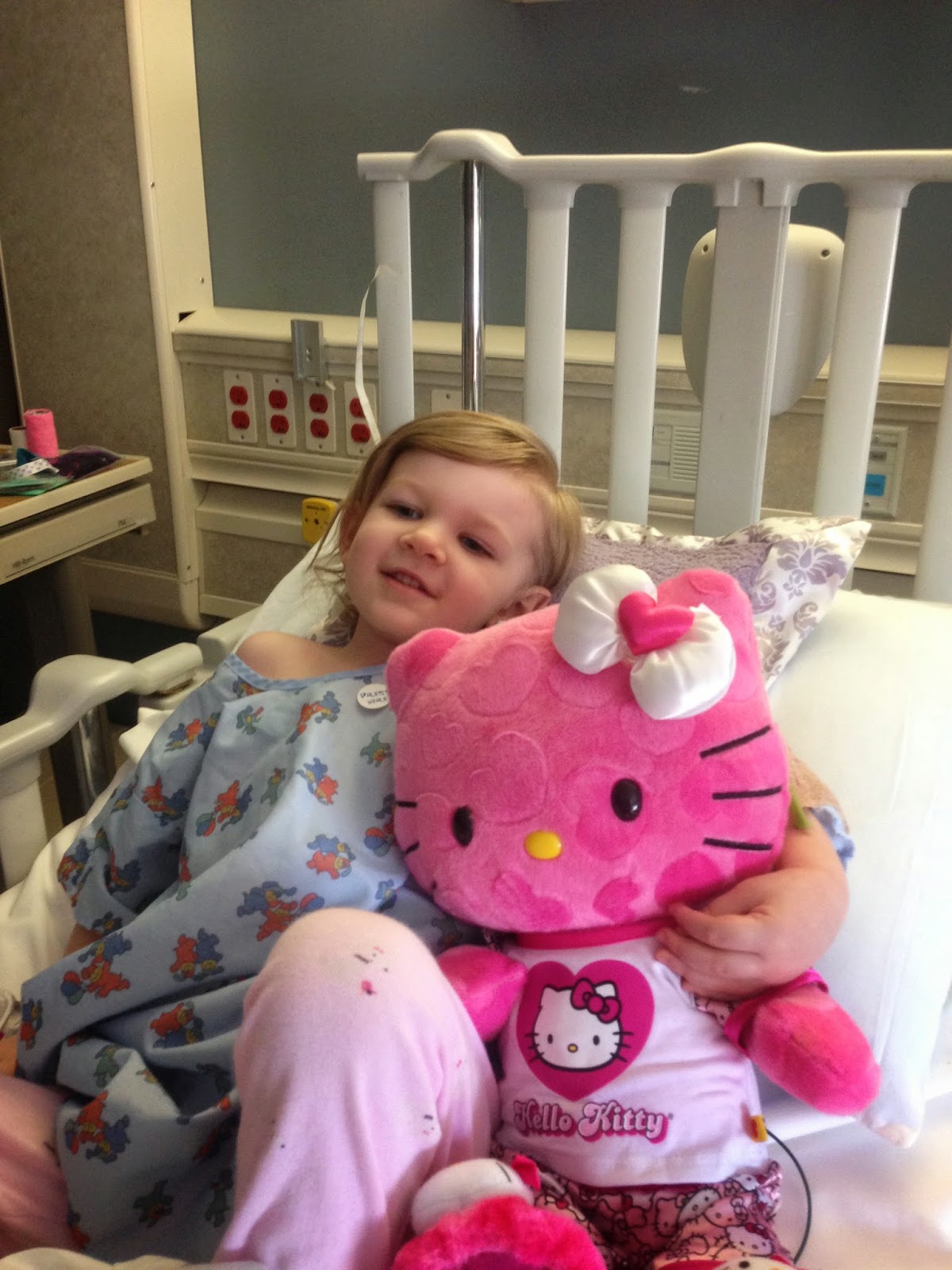 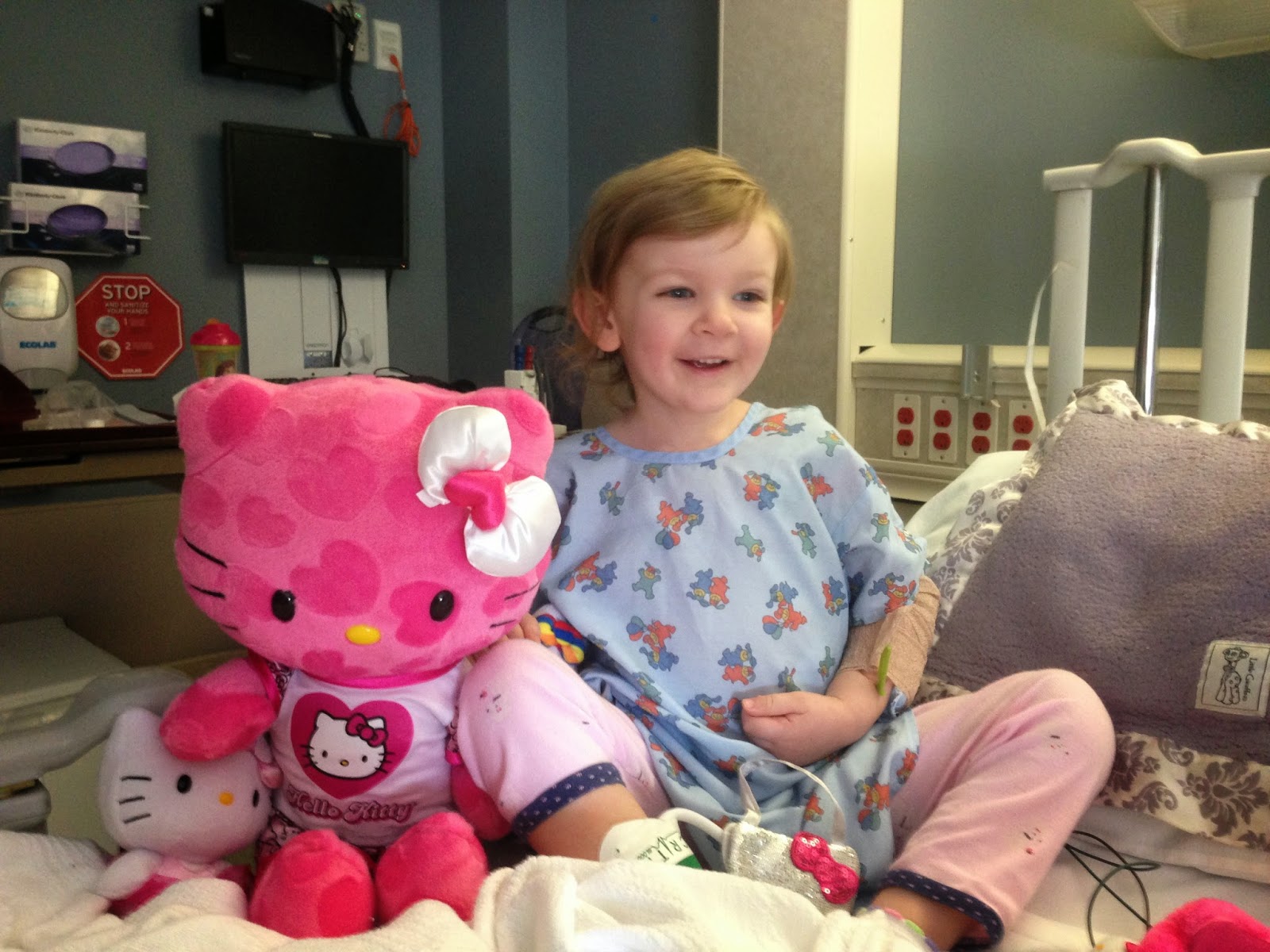 My Aunt Kathy relayed Nikki's name to my mom, who then relayed the Hello Kitty tale to me, & we decided one day we'd visit the store & thank Nikki & introduce her to Reagan; that day was this past Saturday.  I walked up to the counter, Henry on my hip & Reagan roaming the Build-A-Bear store wide-eyed, & asked the dark-haired young lady manning the register if Nikki was working.  She informed me that I was speaking to Nikki, & so I attempted to tell her why I was inquiring, & I may've teared up a little & started blubbering.  Between my mom & me, we let her know who we were before things got weird, thanked her for her kindness, & introduced her to Reagan.  Today's lesson:  Be a Nikki.  Be a person who's willing to take personal time & go out of your way to brighten someone's day, particularly if that someone is a toddler in PICU.

Aside from the coffee, the only purchase at the mall was a new pair of shoes for Henry.  Trey has been expressing strong opinions about Henry's wardrobe lately, particularly his shoes, so these are an attempt to shut him up compromise. This is the best pic I've managed: 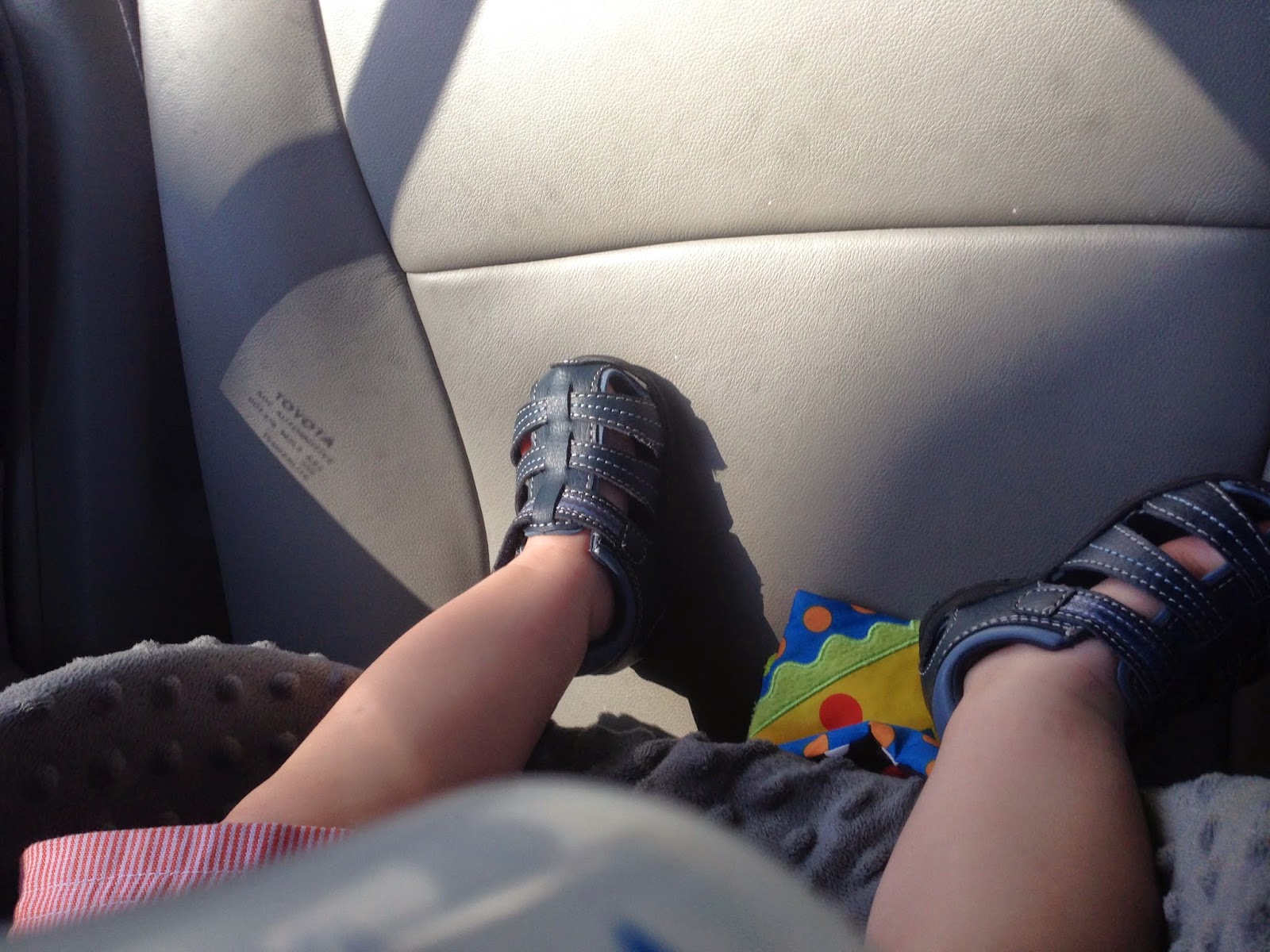 We left the mall & headed to Books-A-Million, the erroneously named bookstore I rarely visit because they almost never have the book I want, & when coupled with the overflow of sketchy characters from the Wal-Mart next door, Amazon is usually just too tempting.  As much as I love some of the clothing stores & eateries larger cities have to offer, if I could bring one business to this area, it would be a Barnes & Noble.  I love bookstores, particularly those that house a Starbucks; it's like biting into a pastry & discovering it's filled with cream cheese.  Despite the convenience of Amazon shipping a book to my doorstep, or the ability to click a few buttons & download a book to my iPad, there is a deep, abiding nerd need in me to go to a bookstore, walk up & down the aisles (preferably while sipping a latte), & locate & purchase a book.  The smell inside a Barnes & Noble is perhaps the best smell in the world; a mixture of coffee & paperbacks, it is the smell of possibility.

So, back to my original point, the two books I was searching for in Books-A-Million.  The book club has gotten all fancy lately & we actually have a schedule of books for the summer.  This month we're reading A Tree Grows in Brooklyn & in July we're reading The Giver in preparation for the August release of the film adaptation.  I took a gamble that Books-A-Million would have both A Tree Grows in Brooklyn & The Giver since these are fairly mainstream titles, & my gamble paid off.  So I am set for summer book club reading.

But, what about June, you ask?  Ah, yes.  After two years of me dropping subtle hints, we are reading A Farewell to Arms in June, a book I already own.  It is quite amusing to reread the paperback copy I first read when I was in high school & laugh at the amateurish notes I made in the margins.  "Rain = foreshadowing" . . . oh to be sixteen again.  Whether it's a genuine interest in the Hemingway classic or an attempt to get me to shut-up, for better or worse, the book club ladies & I are revisiting the Great War in June.  There's no better summer reading than a book about war that features disillusioned soldiers drinking in excess & wandering forlornly in the rain; it just screams, Summer read!


By the way, click here to check out what's for sale on ebay . . . or here if you're looking to spend a little less.

Annnywaaaaay, back to Saturday . . . after a quick dinner, we attempted to get some pictures of the kids in this patch of wildflowers near my parents' house. 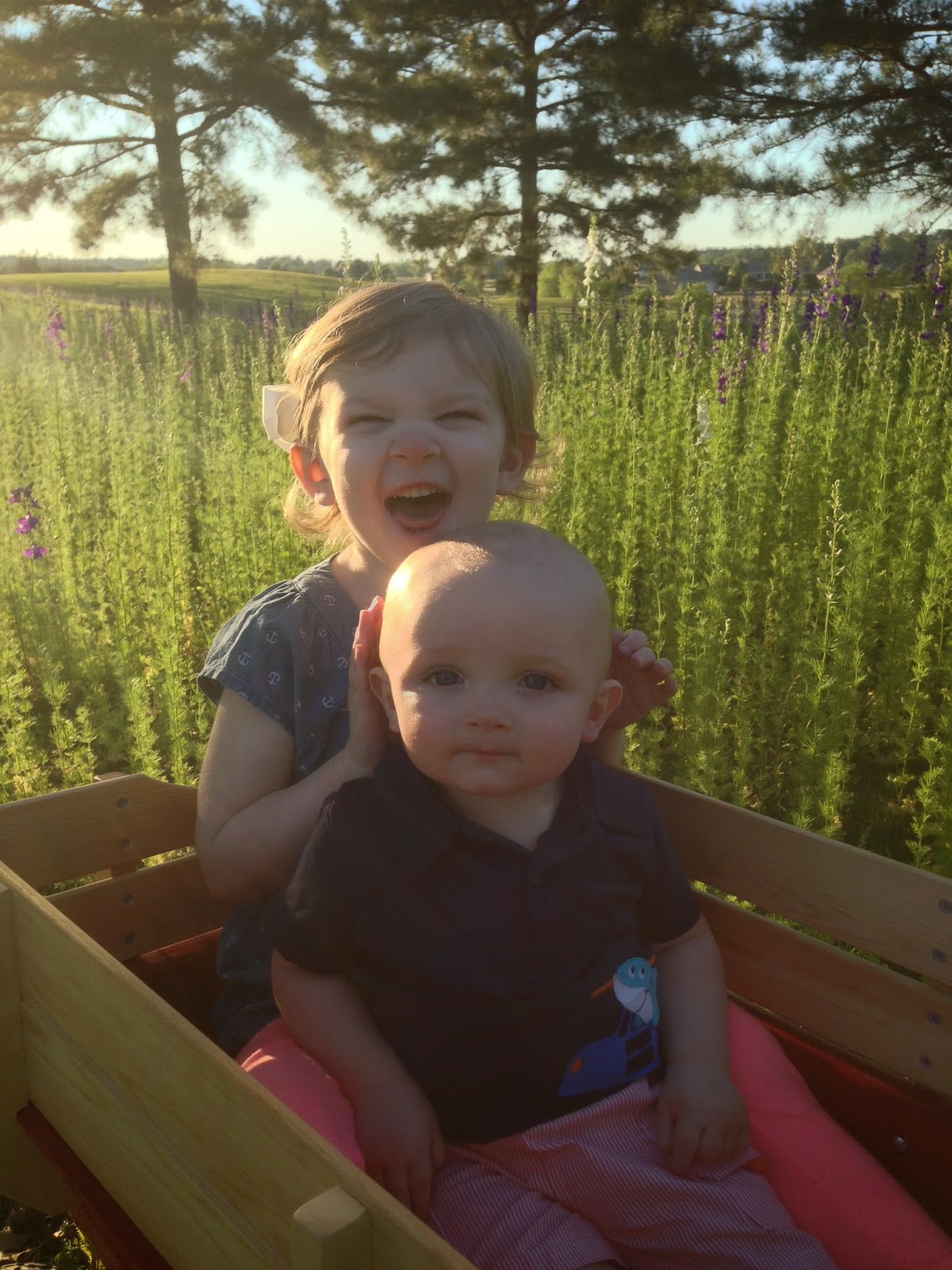 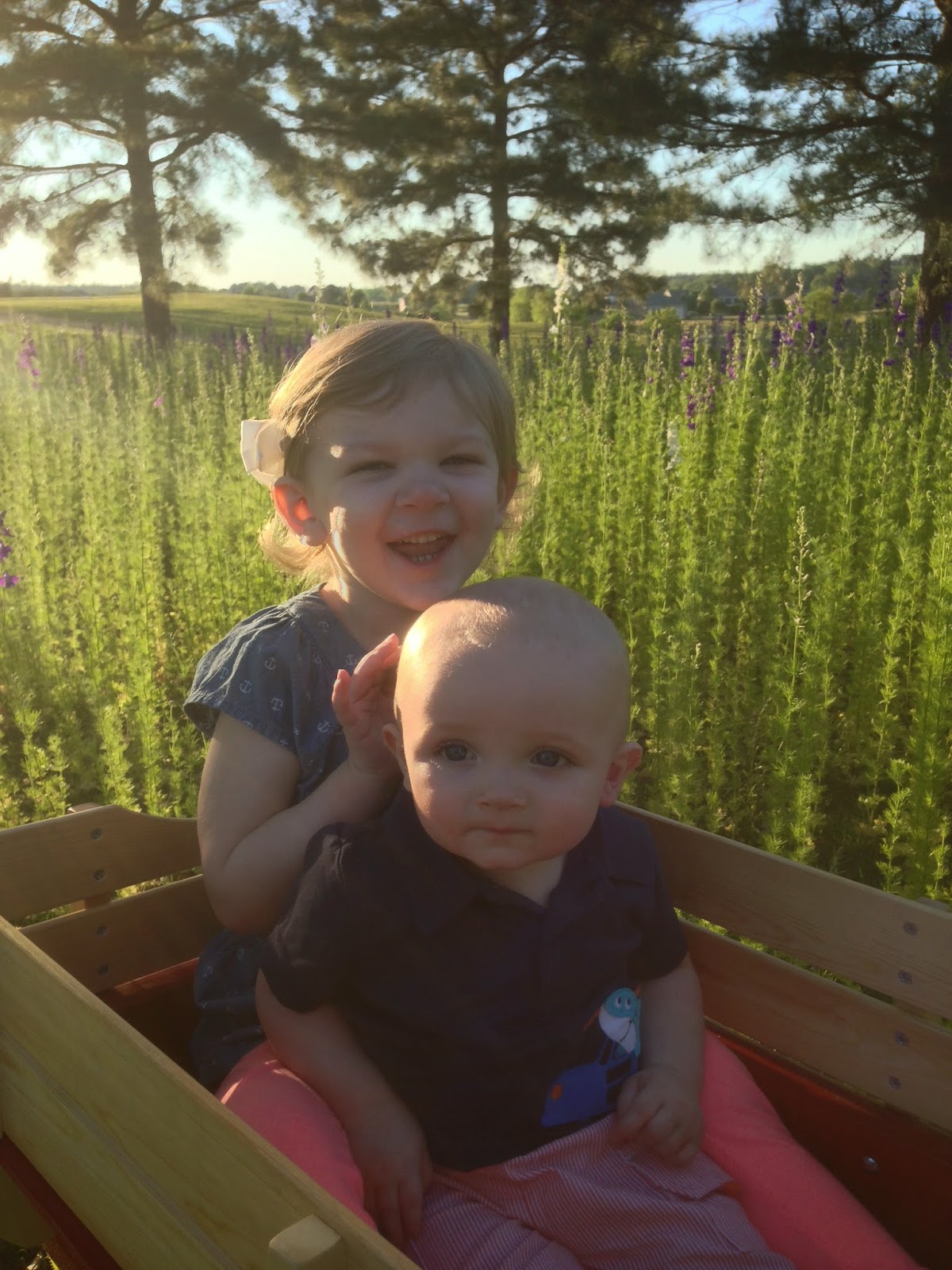 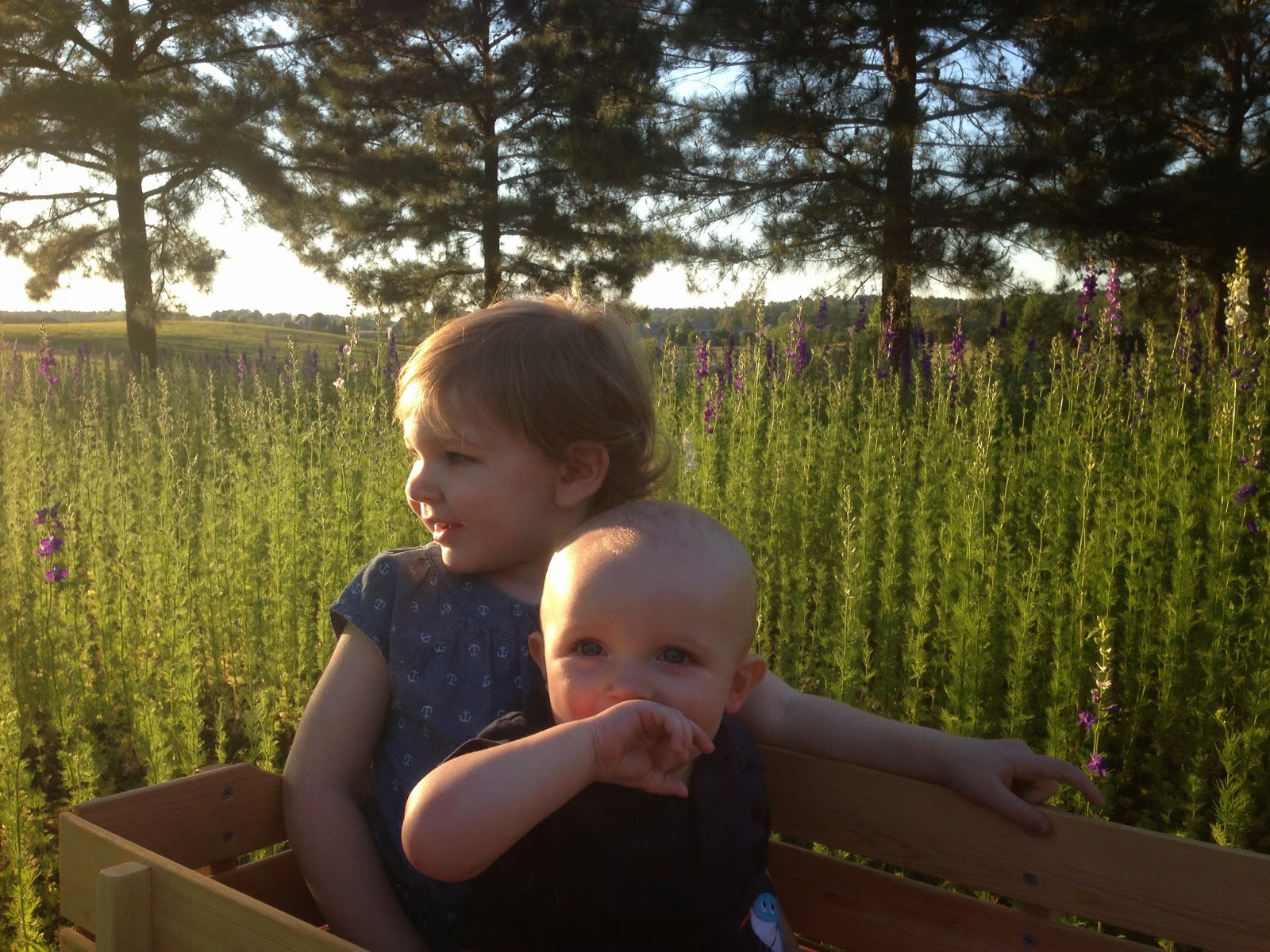 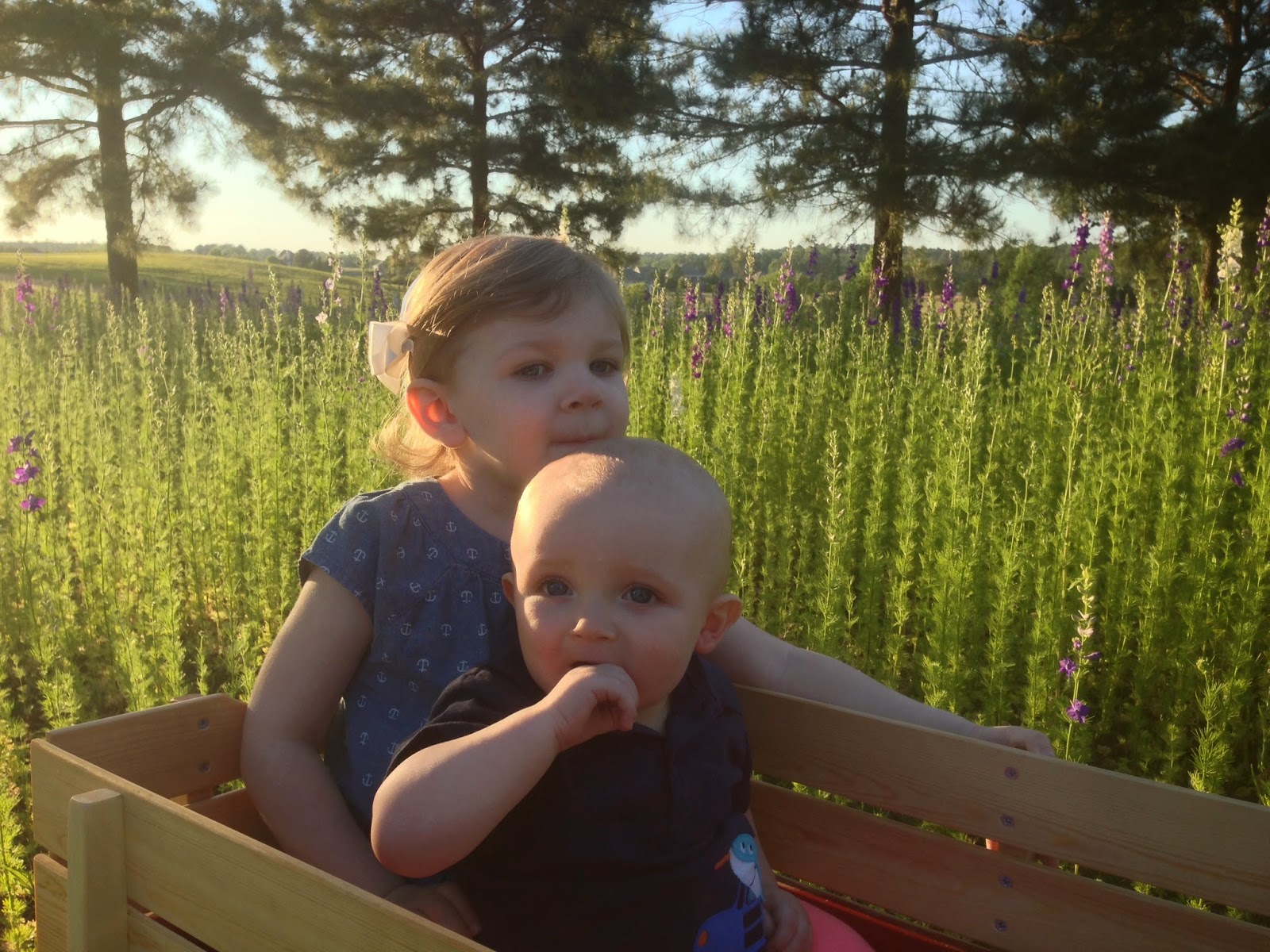 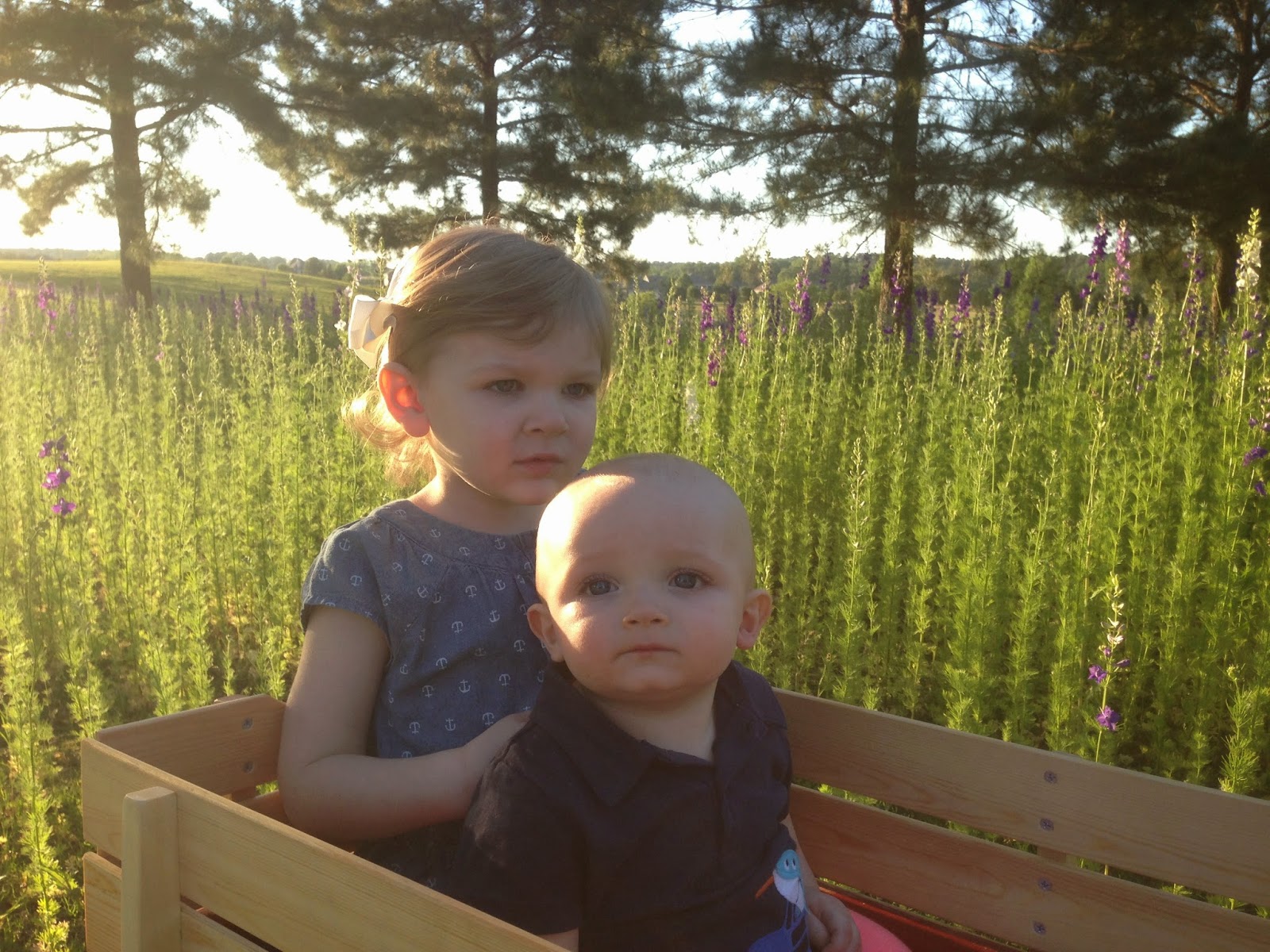 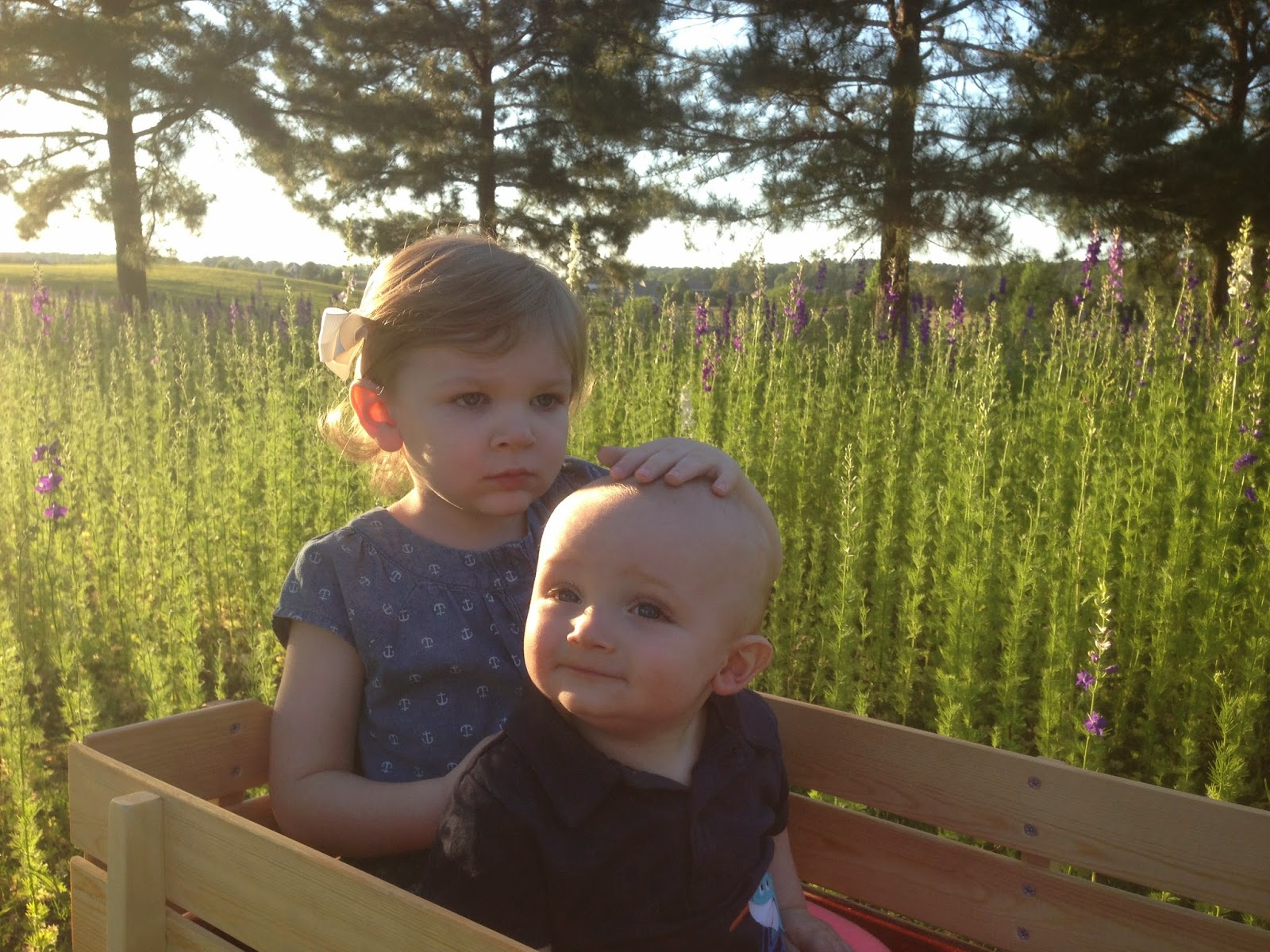 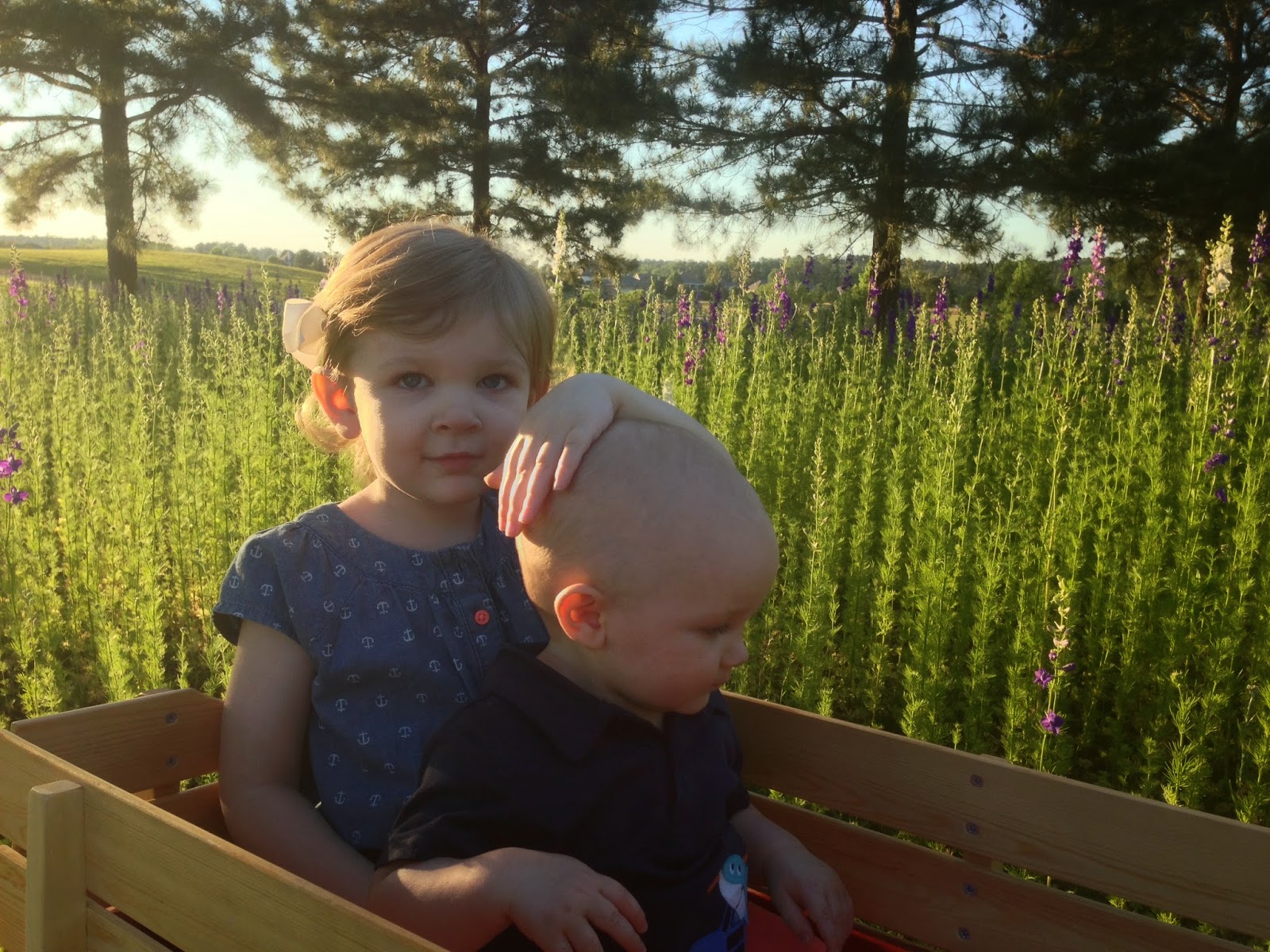 So that's how that went.

I took this of Henry swinging a little bit later, & while it's not from his *official* eleven month photo shoot (which is scheduled for later this week), I'll post it now since today he hit the eleven month mark. 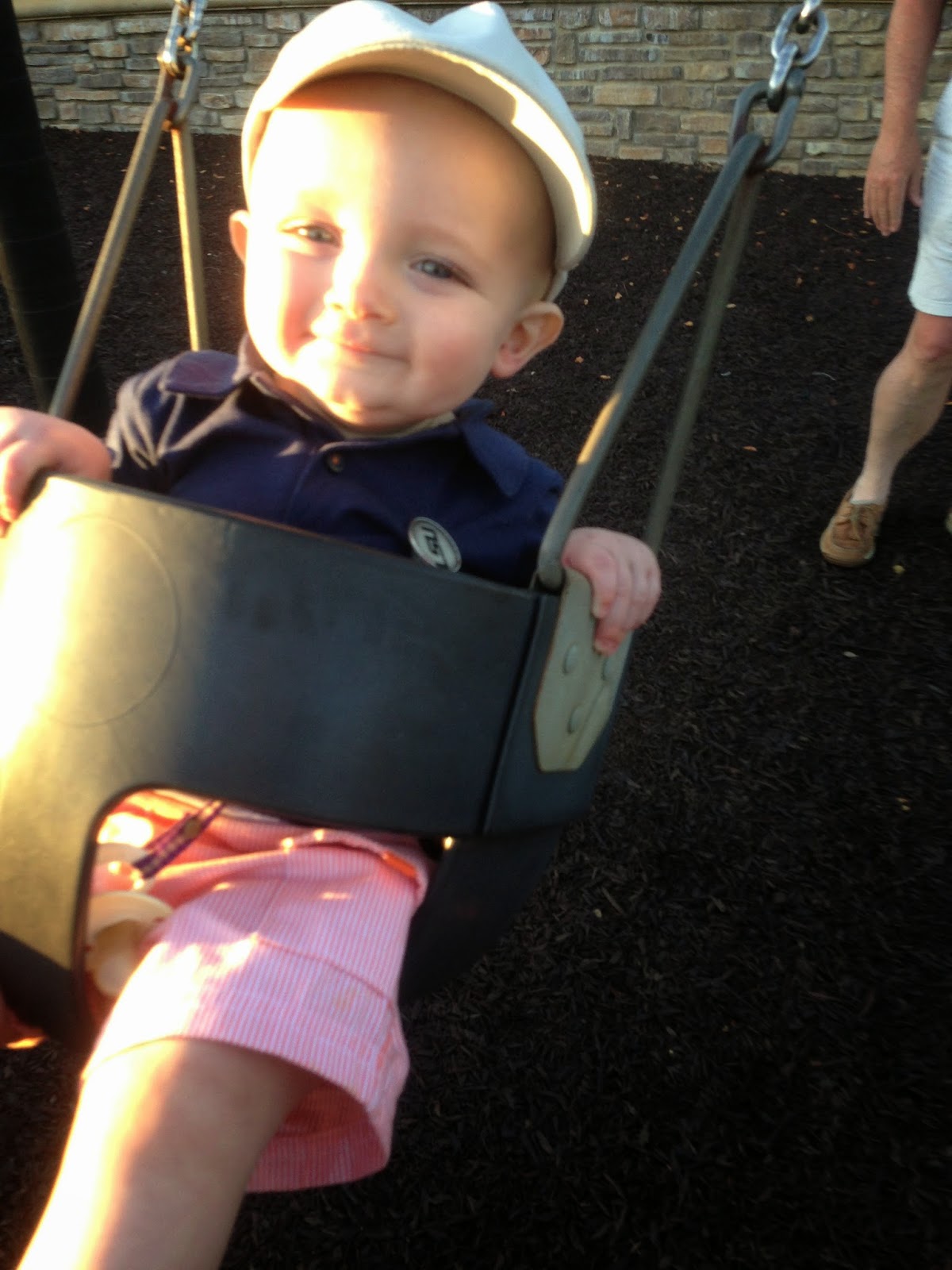 So, yesterday.  I was out of pocket yesterday because we were traveling to & from Jackson for Reagan's second appointment with her pediatric endocrinologist.  Here's what you need to know:

(1) Reagan's appointment was at eight in the morning;
(2) we opted to drive over yesterday morning.

So while I'd love to tell you all about the appointment & the fun in Jackson that followed, it's just not happening at this moment.  Like my many accomplishments Saturday, Monday's successes, of which there many, were made possible by what can only be described as a boatload of coffee.  I shall return soon with the details of our daytrip to Jackson, & relay the coffee drip by drip, because life is what happens after you've had your coffee.

On second thought, I think that's what I'll title my autobiography: Life After Coffee.  But I digress.

Email ThisBlogThis!Share to TwitterShare to FacebookShare to Pinterest
Labels: Coffee