Oh goodness.  What you need to know is that this past weekend, in the span of about thirty-six hours, I read Gillian Flynn's Gone Girl.  I probably should delay writing this a week or so to allow my thought processes a chance to rest & regroup.  But I won't.

I am currently struggling to free myself from a vortex that sucks me in twice yearly known as the end of the semester.  It's a special time when students I've rarely seen for several months come flocking to me, eager to get in touch with the instructor they've been artfully dodging, their faces stained with tears, ready to open up & share personal stories of tragedy (tragedy so gripping it's prevented them from attending class or doing any of their work).  All of their grandmothers died.  Sniff sniff.  Their uncle has been in the hospital.  Sniff sniff.  They haven't had any gas money.  Sniff sniff.

I know; I'm terrible.  I used to pretend to care.  I'd offer a few fake platitudes.  I'd stop short of telling them to their face I thought they were pathetic, lazy, liars.  Then, last Thursday I turned a corner, or, as Bob Seger would say, a page.  I began a new chapter in my career as an adjunct instructor, & the title of that chapter is Truth.  I don't know if the excuses have been more plentiful & more pathetic this semester, or if I am getting older & less amiable, but something in me snapped last Thursday & I told the Johnny-come-latelies exactly what I was thinking, which, I think, is exactly what they needed to hear.


If you knew you had no available childcare, you should not have registered for the class.

Now is not the time to worry about work that was assigned in February.


You cannot receive credit for speech class if you don't give any speeches.


It is almost May & I don't even recognize you.


I do not believe you.

I left work in a great mood last Thursday.  I felt a wee bit empowered by all the truth I'd dispensed.  I was exhausted (teething is exhausting!), but I'd finished reading a great book Wednesday night & was ready to discuss it with the book cub ladies.  Our April book, Elizabeth Wein's Code Name Verity, is historical fiction that tells the story of two young women whose wartime jobs during WWII force them to work together in a tense situation, & a friendship begins.  As is usually the case when I read historical fiction, I got hung up a bit on some of the details (is this a real city?, could a woman really have worked in this capacity during WWII? . . . you see why straight up fiction appeals to me).  The book is a beautiful story of friendship forged under fire & raises questions about what is morally acceptable in times of war; the book club ladies & I had a deep, philosophical discussion about these matters over coffee & snacks, because no true philosophizing is done absent a hot cup of coffee.

As we were all shuffling toward our cars Thursday night, a few ladies mentioned they had read Gone Girl.  In my mind, I pictured the hardcover copy of Gone Girl that had been sitting on my nightstand for over a month since a friend lent it to me.  I'd resisted it well.  I had a plan.  From everything I knew about it, I was certain once I picked it up, I'd be, well, gone.  So I didn't crack the book because when I did have time to read this last month, I read Code Name Verity.  That's what I love about book club - the pressure of the looming deadline.  I just can't show up unable to chatter about that month's book because I haven't finished it, & that's the kick in the pants I need to discipline myself & keep reading even when the book is slow, & I have to stop & google things because I obsess over details in historical fiction.  I do enjoy a book that grabs me on the first page, but many of the greats are slow burners, & you have to keep pushing, & pushing, & then the reward in the latter half of the book is simply glorious.  A prime example of this is Rebecca, which I discuss here.  But I digress.


I didn't touch Gone Girl Thursday night.  I no longer had Code Name Verity to read, but there was (no, there is!) a large stack of items that need to be graded sitting on my desk.  My plan was to grade over the weekend, & then begin Gone Girl next weekend once the bulk of the end of semester workload was behind me.  That's what a responsible adjunct instructor would do.

Friday went well . . . for a bit.  I vacuumed (because Easter grass is only fun for a short while), did some laundry, & got the Easter decorations put away.  I changed a few diapers, & injected some insulin.  I answered a few emails from bewildered students wondering if I'd had a change of heart since our chat Thursday (No.  No I have not.).  As I was answering the fifth or sixth email, I glanced over at the stack of ungraded papers, & thought about the stream of excuses I'd listened to Thursday, & recalled the conversations re:Gone Girl I'd overheard Thursday night at book club . . . & it was all over. 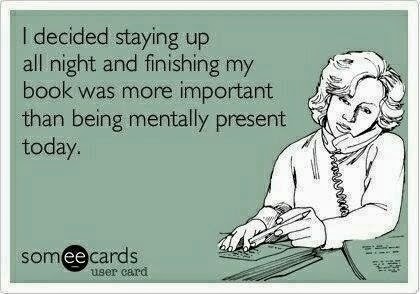 I did sleep some.  I ate a little bit on Saturday (Raisin Bran, a few Hershey's Kisses . . . shame, shame, I know).  No, I did not bathe.  I reached a crucial moment early Sunday morning.  I could've finished the book, but I'd have had to stay up until about two in the morning, & then rise a few hours later to begin the church prep.  So, I went to sleep about one o'clock, & finished the last few chapters Sunday afternoon while Henry napped & Reagan was "resting," which is what a three year old who rarely naps does when mama has to finish a book.

I managed the quick read thanks to a field trip Trey & Reagan took Saturday, as well as two stellar naps the teething one took.  Here's Reagan ready for her trip to play on her swing set at Trey's parents' house (she's not wearing lipstick . . . my guess is she'd just eaten some of her favorite almonds dusted with chocolate): 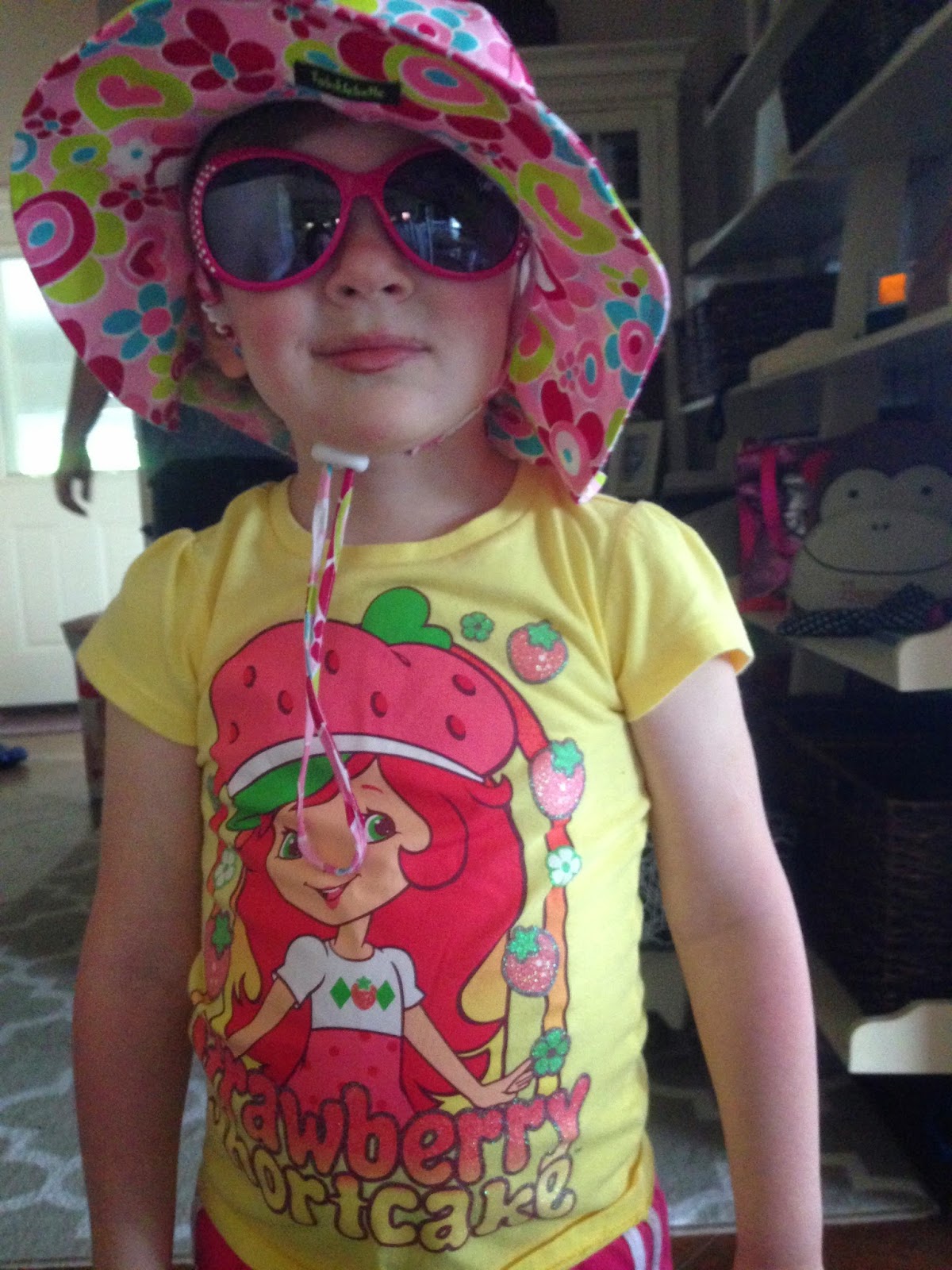 Here's what's crazy (besides me):  Code Name Verity & Gone Girl have a few things in common.  They both alternate first person narrators, & they're both told in epistolary form.  Gone Girl includes diary entries from Amy Elliott Dunne (the girl who is, you guessed it, gone), while her husband, Nick, narrates his sections in real time.  Code Name Verity is almost exclusively constructed from letters/diaries/notes the two young women kept during WWII.  By far the most fascinating thing about both novels, & why I want to reread both (eventually), is that the authors expertly craft narrators who are, for various reasons, unreliable.  They are lying, but you're not sure when & about what exactly.

An unreliable narrator is a great literary device; they keep you reading, & often force a reread (& they drive me completely insane).  It's always an awful feeling to know you're being lied to, whether it's a student who brazenly lies to your face or a fictitious narrator you can't trust.  Obviously, the narrators are considerably better liars than the students, seeing as the narrators are crafted by authors who probably attended their classes while in college, did their work, & are now responsible adults who contribute to society in a positive way.  Yes, yes, I see the irony, of course, in escaping my lying students & shirking my grading responsibilities, only to spend an entire weekend engrossed in a book narrated by liars.


If you haven't read Gone Girl & want to do so before the film is released, you have until early October.  A word of caution: there is abundant foul language in the book, & also some general filth, & by filth I do not mean mud.  It is one of those books that gets inside your head & you can't shake it for several days.  The plot is sensational.  It is well written, funny at times, & if nothing else, it'll leave you feeling fantastic about yourself & how awesome & normal you are.  Before reading Gone Girl, I'd heard & read some complaints about the ending, so as I neared the end I was prepared to be unsatisfied.  I actually love the way Ms. Flynn ends it; I think it is perfect.  I won't say more so as not to spoil those who may now be tempted to read it after this riveting blog post about the book.  I do want to say more though.  Ahhhh!  It's so hard.  I may get Trey a copy for our fifth anniversary, which is coming up . . . in October; perhaps we'll go see the film together (insert maniacal laugh here).

See, you have to read it because that last line will make considerably more sense.